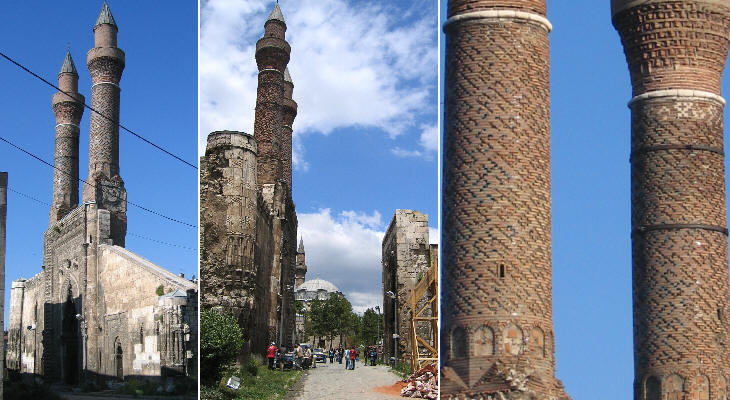 The third great medrese built in 1271 was located opposite Sifahiye Medresesi as if to show that the new Mongol rulers were willing to provide Sivas with monuments comparable with those built in the past.Cifte means twin and no doubt the two imposing minarets are the main feature of this medrese, the interior of which is lost. Unlike Gok Medrese the minarets are built above the portal and not at its sides and they are not fluted. 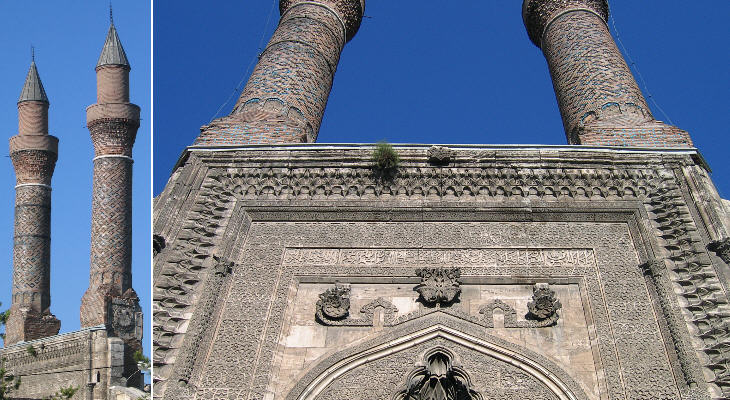 The decoration of the portal is characterized by some projecting reliefs and in general by a decoration which is not as flat as in other portals. This may be due to the fact that there is very little space between this medrese and the opposite one and therefore the view is from a very angled position; in this situation high reliefs are more visible.

Cifte Minare Medresesi: details of the decoration: (left) corner of the façade; (right) upper part of the portal

Sivas is located at an altitude of 3,800 ft: the vegetation of the nearby region is all but luxuriant, while the decoration of Cifte Minare Medresesi has a richness of plant motifs which is typical of a tropical country. This can be observed to a greater extent in the monuments of Divrigi, a town to the east of Sivas. 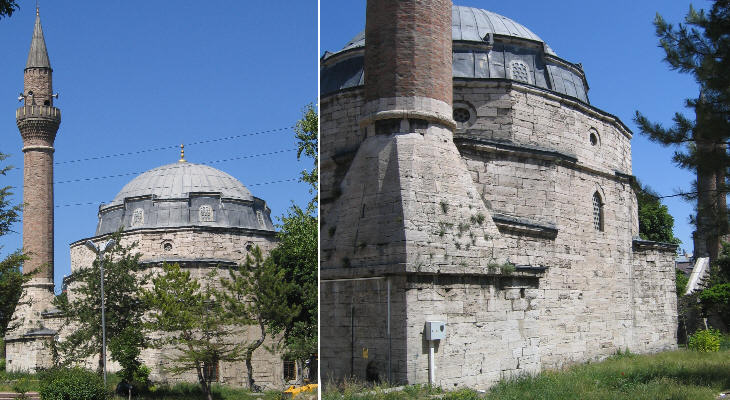 Bayazid, the Osmanli Sultan marched against Sivas, which was given up by the inhabitants, and he left his son Suleiman to govern the country. On the inroad of Timour, the first Tatars who arrived at Sivas were cut off by the Turks, who, to show their contempt of the enemy, left the gates open, but were soon obliged to shut them so hurriedly, that they left some of their own horsemen outside, who were slain by the Tatars. Timour himself soon followed and sat down before the city seven days; on the eighth, the walls and towers having been undermined in several places, they were thrown down. The terrified inhabitants then offered to give up the town, but it was too late; the Tatars rushed in, spared neither age nor sex, saving the governor only, in order to depute him to Bayazid, to report what had become of his strong city of Sivas. It is said that 12,000 Turks lost their lives at this, siege.
William F. Ainsworth - Travels and Researches in Asia Minor, Mesopotamia, Chaldea, and Armenia - 1842
Towards the end of the XIVth century Sivas became an Ottoman possession. This condition lasted for just a few years because in 1402 Timur defeated Sultan Bayezid and the Ottomans lost Sivas and other eastern provinces. A century later they were re-conquered by Sultan Selim I.
Mehmet Pacha Camii is a fine Ottoman mosque; it is known also as Kale Camii, which means mosque of the castle/fortress, although the building is at a certain distance from the site of the old fortress (today a public garden with very limited evidence of its ancient use).

Sometimes the beauty of a town depends on the prevailing stone used to build its monuments. An almost white stone characterizes many buildings of Sivas and enhances their design.

The bazars are well supplied, and there is a considerable transit trade by the routes proceeding from the city.
The Expedition For The Survey Of The Rivers Euphrates And Tigris in the years 1835, 1836, and 1837, by Chesney, Lieut.-colonel. 1850
Sivas would afford, now that steamers ply to Samsun, a very excellent depot for English manufactures and goods, which would find a ready market. The business done in the bazaar as it is, is considerable, and the Christian merchants are rich and industrious. Ainsworth
This caravanserai dates from the Ottoman period; however its decoration and in particular the reliefs portraying lions were taken from a Seljuk building.

Almost all caravanserais located in Turkish towns have been turned into markets dedicated to a specific range of goods. Today Subasi Han is the spice market of Sivas.
The image used as background for this page shows a detail of Gok Medrese.

Return to page one or move to:
Introductory page
Konya
Karaman
Mut and Alahan
On the Way to Nigde
Nigde
Kayseri
Cappadocia
Divrigi