You may wish to see an introductory page to this section with a map or a page with some information on the Jewish settlements in Galilee after the Second Jewish Revolt (132-135 AD) first. 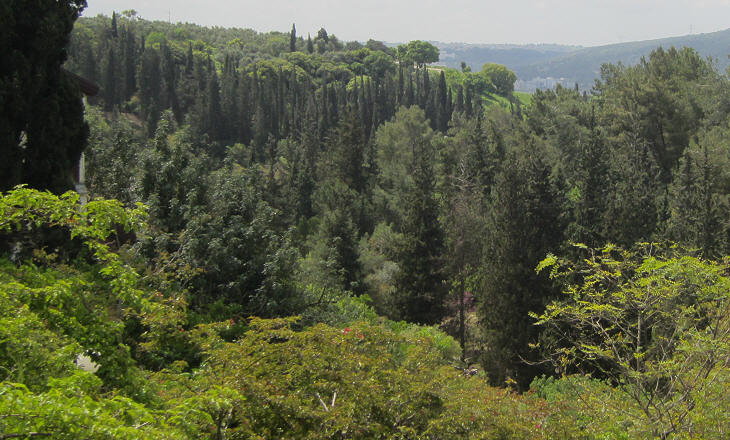 View of the cypresses planted on the site of the necropolis

The archaeological park of Bet She'arim is situated on the slopes of Mount Carmel, a few miles south-east of Haifa. The landscape of the area, thanks to afforestation efforts by Jewish organisations and advanced farming, has an almost Tuscan appearance. 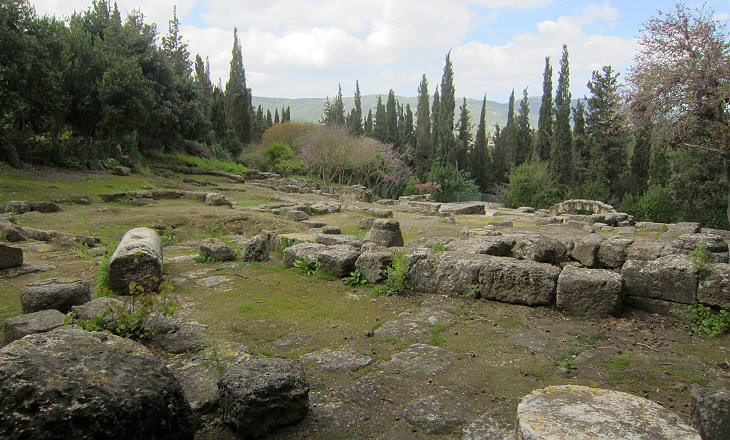 Site where houses and a synagogue have been identified

A village appears under the name Sheikh Bureik or Abreik in Ottoman archives. Named for a local Muslim saint to whom a shrine was dedicated, it was a small village whose inhabitants were primarily farmers. In the late XIXth century Ottoman authorities sold the village lands to the Sursock family of Lebanon, who in turn sold the lands to the Jewish National Fund. A new Jewish settlement, also named Sheikh Abreik, was established there in 1925.
The site of an ancient settlement was discovered by chance by Alexander Zaid, one of the first Jewish settlers, in the 1930s. Excavations carried out in 1953-1957 identified a small Jewish village which flourished between the IInd and the IVth century AD, a period of economic development for the whole of Galilee, which was identified as Beth She'arim. 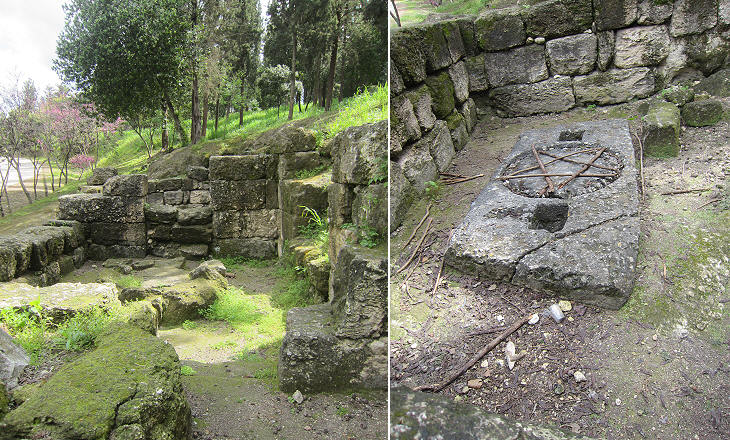 Wheat farming was the main agricultural activity of the region, but the hilly landscape of the area around Bet She'arim was not suited for that crop and probably the villagers earned their living by making olive oil. 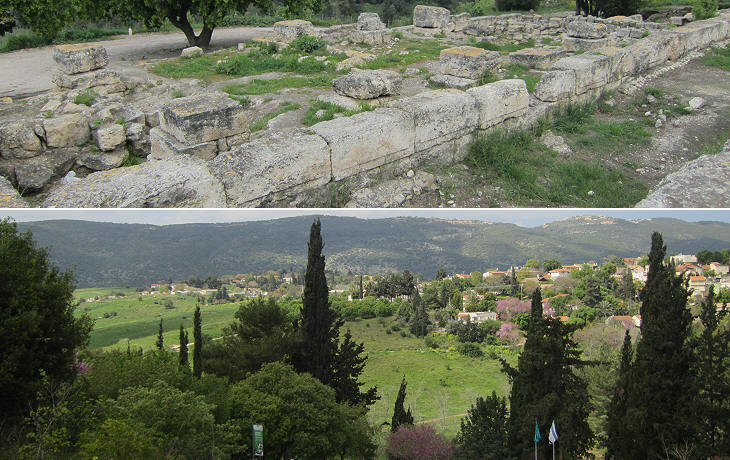 (above) Basilica; (below) view of the surrounding landscape

Hewed into the limestone slopes of hills bordering the Vale of Jezre'el, a series of man-made catacombs was developed from the 2nd century AD as the necropolis of Bet She'arim. It became the primary Jewish burial place outside Jerusalem following the failure of the second Jewish revolt against Roman rule.
From the UNESCO synthesis of the universal value of the Necropolis of Beth She'arim which in 2015 was added to the World Heritage List.
Limited evidence of ancient buildings and countryside fine views would not attract many visitors to Bet She'arim if a large necropolis had not been found on the slope of the hill beneath the village. It is made up of some 30 burial caves excavated in the rock and complemented by walls and supporting structures. Mugharet el Jehennum (Cave of Hell); illustration from "The survey of western Palestine" by Claude Reignier Conder - 1883 (he visited the site in 1871)

Mugharet el Jehennum - A cavern under the hill on which Sheikh Abreik is built. It consists of a central chamber, from which there are two doors leading to other chambers on the south, one on the east, and three on the north. The loculi in this and all the tombs near it were originally covered with flat slabs. In many cases they seem to have had a cement coating of triangular section, forming a flat ridge over the slab. (..) Entrances have flat arches, but the roof of the chamber is flat. (..) The door communicating between chambers has a slightly arched roof. (..) The walls here are cut with an instrument having, apparently, two teeth. (..) The main peculiarities of this system of tombs are:
1st. Extreme irregularity of the cutting, scarcely any of the walls being at right angles.
2nd. The use of kokim (a kokh is a type of Jewish tomb complex characterized by a series of long narrow shafts, in which the deceased were placed for burial, radiating from a central chamber) and loculi together, the former on the level of the floor, as though the chamber had been enlarged and made higher (as indicated also, perhaps, by the set back in the walls).
3. The existence of kokim and loculi so small as evidently to be intended for children.
4th. The use of the cave for sepulture or otherwise by Christians. Conder 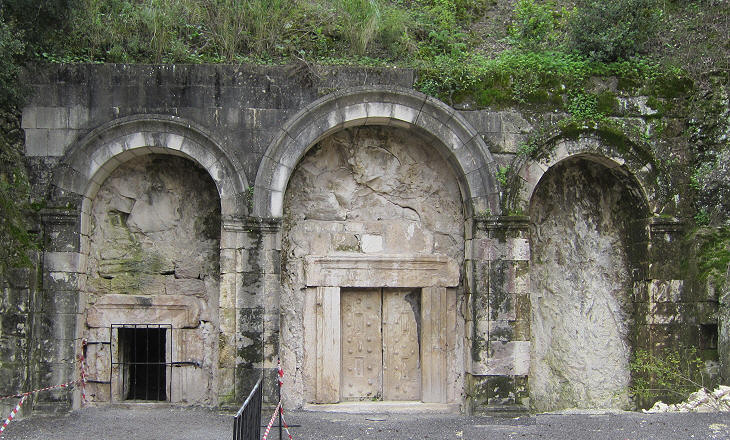 Located southeast of the city of Haifa, these catacombs are a treasury of artworks and inscriptions in Greek, Aramaic, Hebrew and Palmyrene. Bet She'arim bears unique testimony to ancient Judaism under the leadership of Rabbi Judah the Patriarch, who is credited with Jewish renewal after 135 AD. UNESCO
The whole necropolis (of which a cave had been identified and described by Conder in 1871) originated by the decision of Rabbi Yehuda Hanasi (aka Judah the Prince), who chaired the Sanhedrin at Sepphoris, to be buried in this village where he had lived for many years. He was a very wealthy man and he was regarded as the leader of the Jews of Galilee. He established good relations with Roman authorities and it is said he was on friendly terms with Emperor Marcus Aurelius. He died in 217 so the whole necropolis was developed after that year. 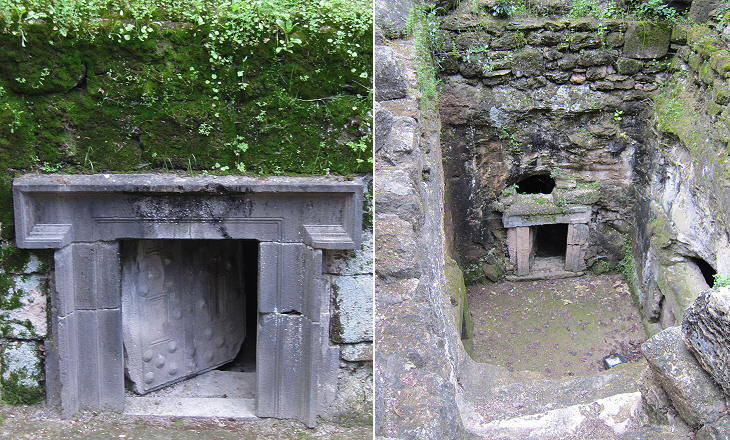 The catacombs themselves, preserved in-situ, retain authenticity in terms of location, setting, form and materials. In terms of use and function, the catacombs had ceased to be used for burial purposes by the 6th century, were abandoned and subsequently neglected. Today they are preserved as part of a national park with some open to the public. UNESCO
The fame acquired by Rabbi Yehuda Hanasi led other pious (and wealthy) Jews to arrange to be buried next to him. The inscriptions found by archaeologists indicate that the people buried at Bet She'arim came from all parts of Galilee and some from rather remote locations such as Palmyra. The caves were carefully excavated and heavy basalt doors closed their entrances thus giving them the appearance of houses. In the images above one can see that tomb looters were unable to move or break the doors and made holes above them to penetrate inside. 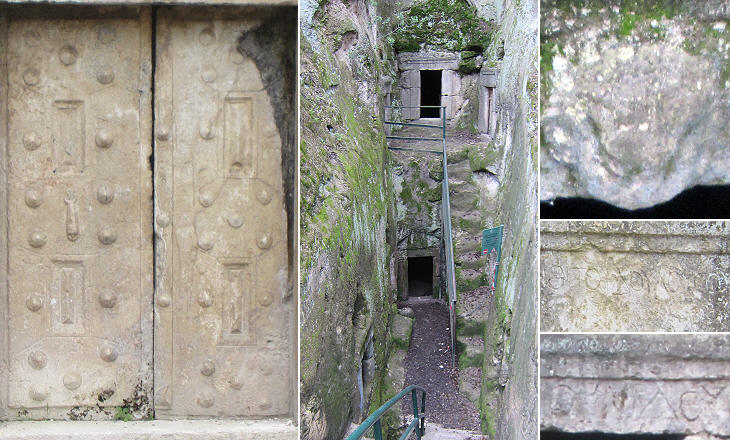 (left) Door at the Cave of Rabbi Yehuda Hanasi; (centre) Cave of the Ascent; (right) details of lintels

The assimilation of burial types and artistic expression together with inscriptions indicating the origins of those buried in the cemetery testify to the wide dispersal of the Jewish people at that time and the incorporation into Jewish religious culture of influences from the surrounding populations. UNESCO
The lintels of the entrances were decorated with inscriptions and in some cases with small reliefs. A lot of care went to the basalt doors to give them the appearance of a wooden door decorated with large nails and even a knob. This usage was not limited to Palestine but can be seen in Syria too. The image used as background for this page shows another basalt door. 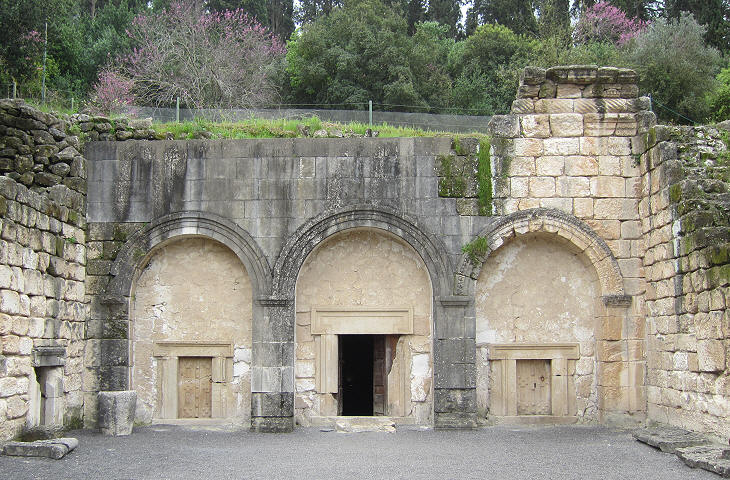 Façade of the Cave of the Coffins (partly reconstructed)

While some caves were family tombs the most impressive one, where 135 coffins have been found, was probably reserved for Jews living abroad who wanted to be buried in Israel. The entrance to the cave was given a basilica-like appearance by building a façade of white limestone. On the right side a fragment of an elaborate cornice is still visible. 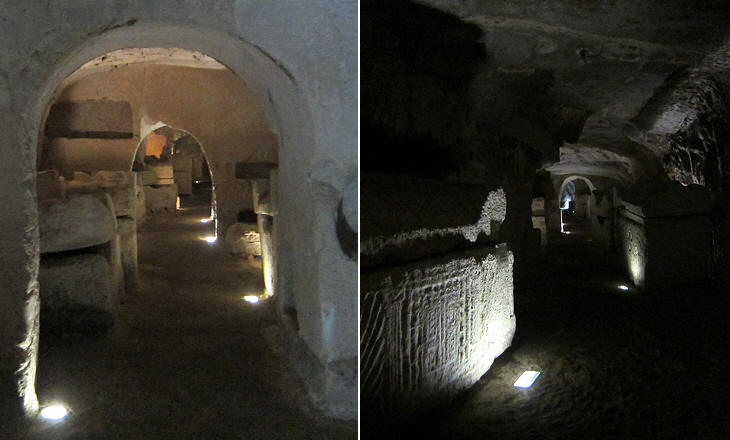 Cave of the Coffins - interior

The initial size of the cave was enlarged by excavating additional galleries in all directions. The bare rock was often plastered and walls and arches divided the space into separate areas. The heavy coffins are usually laid at the sides of a central corridor, but in some instances they seem to block the passage (maybe looters moved them). Cave of the Coffins - Coffin of the Lions

The catacombs of Bet She'arim show the influence of classical Roman art including human images, inscriptions and decorative details and include iconographic motifs and multi-language inscriptions testifying to cross-cultural interaction with the Greco-Roman artistic cultural world of Europe, Asia Minor and Mesopotamia and the Jewish cultural world. UNESCO
Burial in the ground is the prescribed way for disposing the dead in the Jewish religion, but the practice of using sarcophagi was adopted by some Jews when it spread through the Roman Empire where it replaced cremation (you may wish to see the Great Necropolis of Porto, the artificial harbour of Rome).
In Rome some forty Jewish sarcophagi have been found. In general they were decorated with imagery similar to that of pagan sarcophagi (see a very fine example). 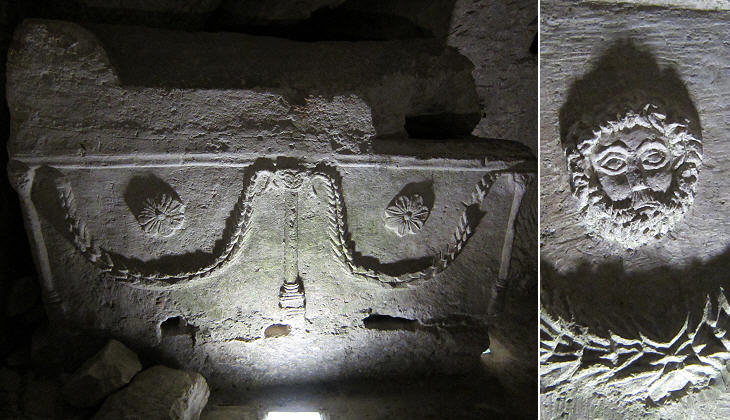 Cave of the Coffins - Coffin of the Mask

Because of the very uneven quality and type of the reliefs which decorate the coffins at Bet She'arim it is possible that some of them came from large towns where more skilled workmanship was available (you may wish to see some of the finely sculptured sarcophagi which were found in the Necropolis Al-Bass of Tyre in Southern Lebanon). 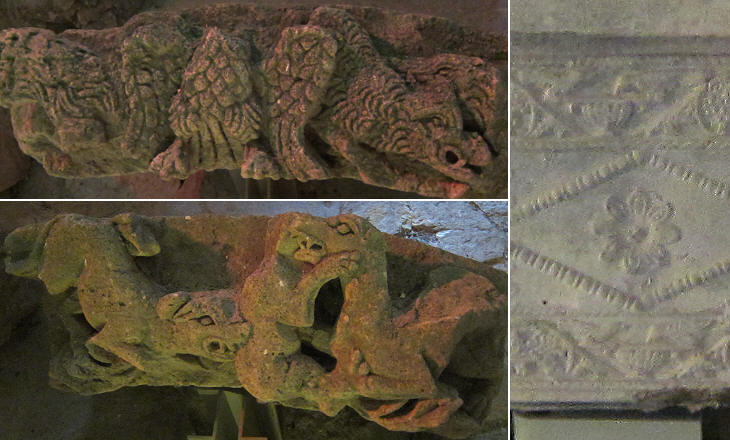 Jews shared to an extent with the pagan "man in the street" knowledge of the Greco-Roman pantheon with its colourful gods. They may have detested the idea of invoking these immortal pagan supermen, but when it came to artistic fashion, some Jews were receptive to what was in vogue in contemporary pagan society.
Leonard Victor Rutgers - Archaeological Evidence for the Interaction of Jews and Non-Jews in Late Antiquity. Lions, winged victories and perhaps even a boar (you may wish to see a spectacular sarcophagus depicting the hunting of the Calydonian boar at Eleusi) are some of the pagan images (all above) which decorate the coffins; in comparison the Jewish symbols (menorahs, palm leaves - below) are rather few and executed in a very poor way. 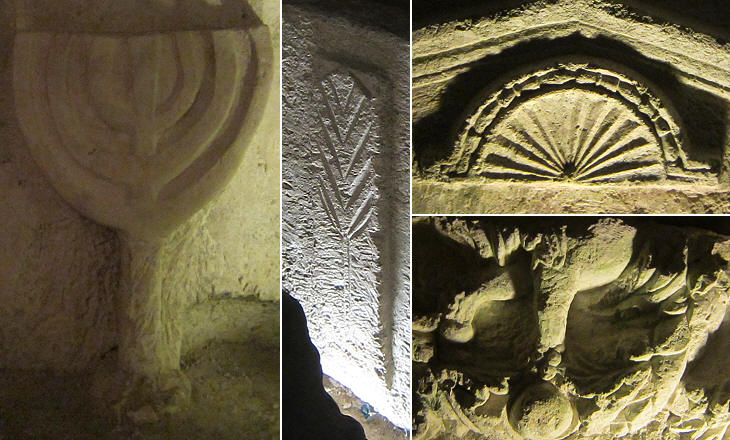