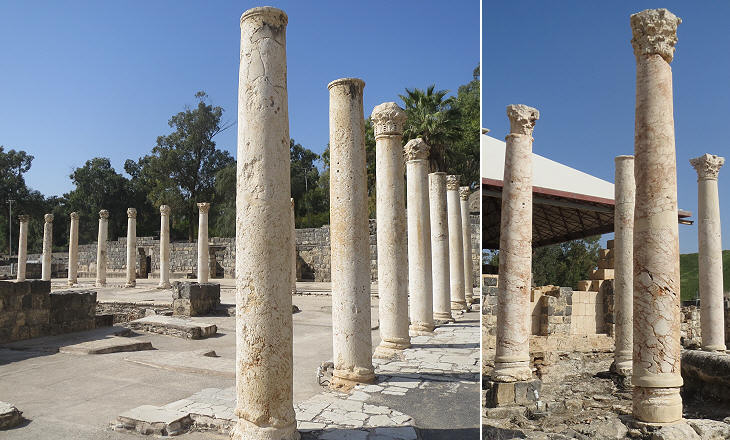 Courtyard of the Western Baths

In the fourth century Scythopolis is mentioned by Eusebius and Jerome as still a "noble" city. It was already the seat of a Christian bishop; and the name of Patrophilus, its earliest recorded bishop, appears at the Council in Palestine in a.d. 318 ; and again in the first Nicene Council, A.D. 325, as well as elsewhere. It was reckoned to Palestina Secunda, of which it became the chief see; and the names of several of its bishops are preserved.
Edward Robinson - Later Biblical Researches in Palestine in the Year 1852
Probably Scythopolis reached its maximum development in the IInd/IIIrd centuries AD. Because the town continued to be an important centre well into the VIth century some of its monuments were restored/modified utilizing material from other buildings. The great courtyard of the Western Baths, probably a palaestra/gymnasium (wrestling school) was built in ca 400, but its columns came from previous buildings. You may wish to see another palaestra at Thuburbo Majus in Tunisia or at Salamis on Cyprus. 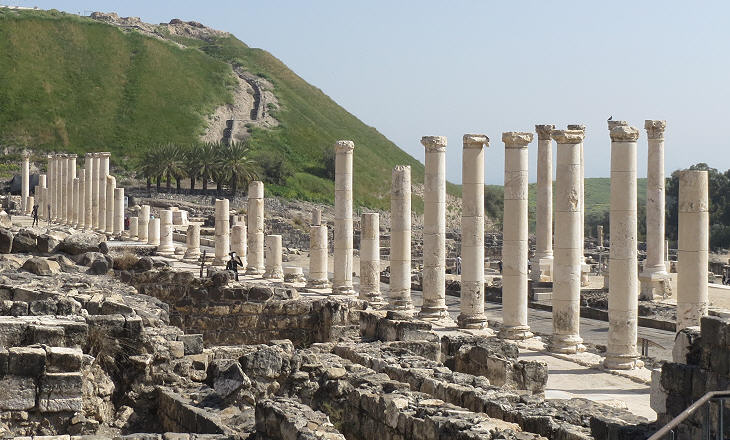 The Western Baths are located near one of the three main colonnaded streets of the town which was restored and embellished at approximately the same period. Scythopolis did not have walls until perhaps circa 530 when Emperor Justinian promoted a large plan of defensive fortifications. While at many locations the part of the town inside the walls was pretty small (e.g. Leptis Magna in Libya), at Scythopolis the enclosure was rather large and it did not impact on the urban layout. The decline of the town began in 542 when a bubonic plague spread in the region. 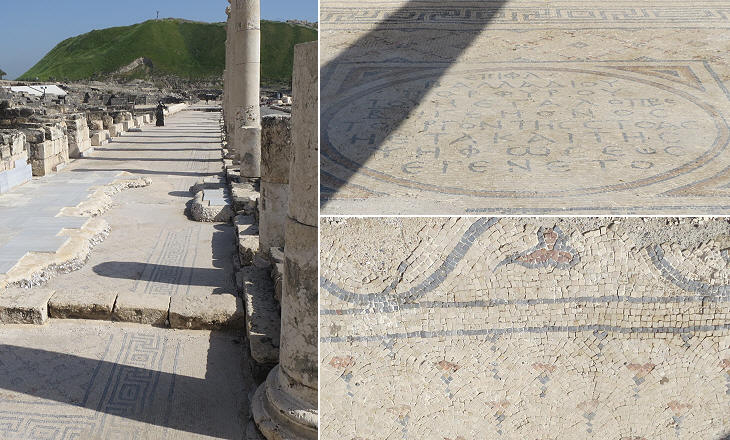 Evergetism (I do good things in Greek) is the word used by French historian André Boulanger to indicate the widespread practice of making donations for the embellishment of towns in the Greek-Roman world. Celebratory inscriptions often make references to local magistrates such as the ediles (in charge of streets, bridges and similar facilities) and the flamines (in charge of promoting the image of Rome in the provinces), but in many cases the donors were just wealthy citizens. At Palmyra they were remembered by small statues on the columns they had contributed to erect, but when Palladius restored the street, statues were already regarded as part of the ancient pagan beliefs. 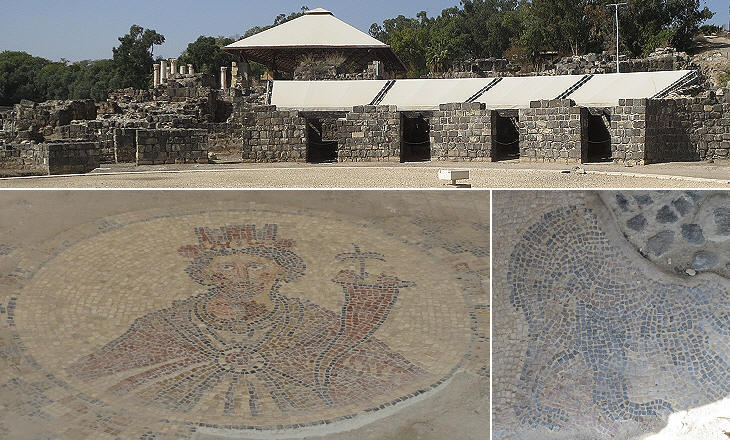 (above) "Sigma" a semicircular square along Palladius Street which perhaps housed a market (see an oval square at Gerasa / Jerash, another town of the "Decapolis"); (below) mosaics inside the rooms portraying Tyche, guardian goddess of the city (left) and a bear (right)

In 435 Emperor Theodosius II ordered the destruction of all pagan temples in the Eastern Roman Empire and a century later Emperor Justinian launched a campaign to eradicate all forms of pagan worship. This explains the very limited number of statues, reliefs and mosaics portraying the ancient gods which were found at Scythopolis. Goddess Tyche however escaped the fate of her fellows because she cared for the destiny of towns, which were symbolized by the crown of walls she wore (see a pagan relief at Ephesus and a Christian one at Philadelphia/Amman). 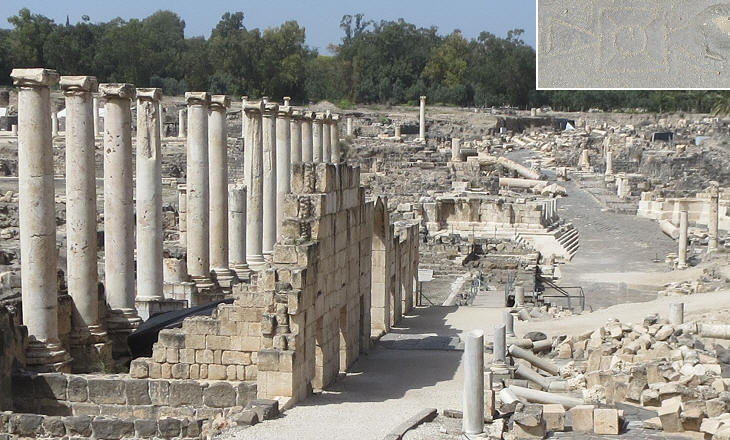 Silvanus Street; (inset) a stone carved with a betting game, see a similar one at Jerusalem

Because of the presence of the acropolis Scythopolis did not have the usual layout of Roman towns so its main strets have not been named as decumanus (east-west) or cardo (north-south), but with names found on inscriptions. The reconstruction of Silvanus Street has been rather awkward because the first road was superseded by a Byzantine one, which was again modified by the Arabs before an earthquake in 749 accelerated the decline of the town. 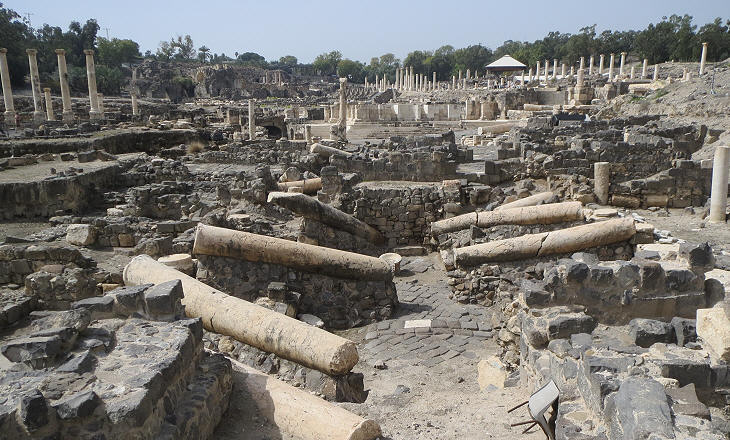 Valley Street at its town end

South of the Tell is a low open tract in the valley, in which are many ruins. Robinson
The longest colonnaded street of Scythopolis started at an imposing bridge and reached the centre of the town along a valley between the acropolis and another lower hill. This explains the name given by the archaeologists. Based on the amount of material found at the site it was the most impressive of the three streets and it was interrupted by a large circular square. The "Central Monument" seen from the acropolis; (inset) marbles which decorated its rear apse

Extensive excavations began during the years 1921-1933 and they are still going on. Valley Street ended at a monument with many niches which most likely housed statues of emperors or gods. Its decoration had been very expensive because it was covered with coloured marbles. The red panels in the inset maybe came from Simitthus in Tunisia, a quarry which was known for its reddish/yellowish marble. 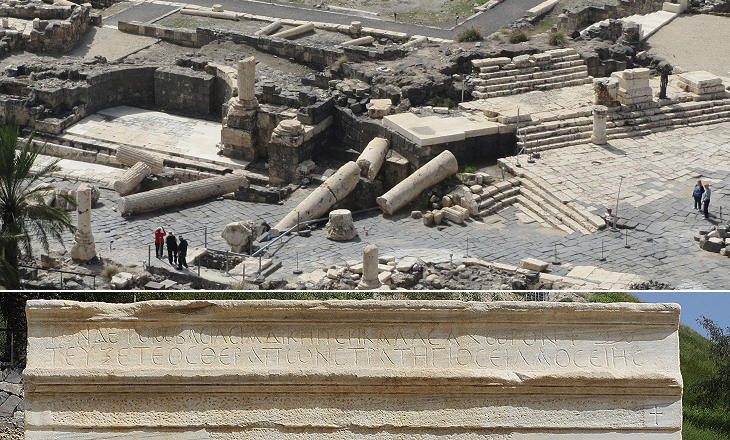 (above) Nymphaeum (left) and temple (right) seen from the acropolis; (below) Byzantine inscription (with a small cross on the lower right corner) opposite them

Scythopolis must have been a city of temples. One or more stood on the saddle on the south-west of the Tell; here I counted eight columns still standing together. Another temple was in the low area south of the Tell; and the traces of several are seen in various directions. There remain standing some 20 or 30 columns in all. All the edifices were apparently built of black basaltic stones, except the columns. Robinson
A nymphaeum (monumental fountain) and a temple stood at the junction of the main streets right at the foot of the acropolis. The fountain shows signs of restoration in the IVth century, but the temple does not. Because a temple to Zeus stood at the top of the acropolis that at its foot was perhaps a Capitolium, a temple dedicated to Zeus (Jupiter), Juno and Minerva, the three deities which were worshipped on the Capitoline Hill in Rome. These temples were often built in provincial towns as a sign of loyalty towards Rome (you may wish to see the unique Capitolium of Sufetula in Tunisia). Another option indicates the building as a kalybe, a temple typical of the Hauran region, the southernmost part of today's Syria, which has been found at Philippopolis and Bosra. 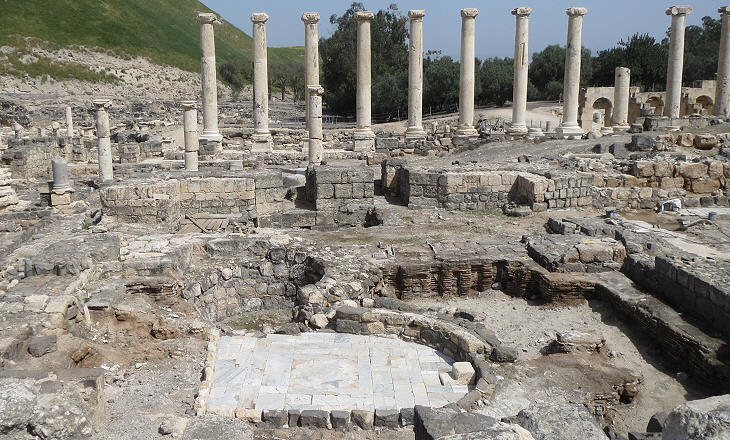 El Hammam, The Hot Bath, is a reservoir which was originally filled by the aqueduct called Kanat el Hakeimiyeh. (..) It is well built, and the interior covered with a hard cement. (..) The reservoir was covered with a tunnel vault, now fallen in. It appears to have been surrounded by a colonnade, the pillars of which remain in situ on the south side. (..) The roof is possibly not part of the original structure, which would seem to have been a public bath.
Claude Reignier Conder - The survey of western Palestine - 1883
An aqueduct provided Scythopolis with water for its fountains and baths. A second large bath establishment has been unearthed to the east of Palladius Street. It included several halls with marble floors and sections of the hypocaust, the underfloor heating system. 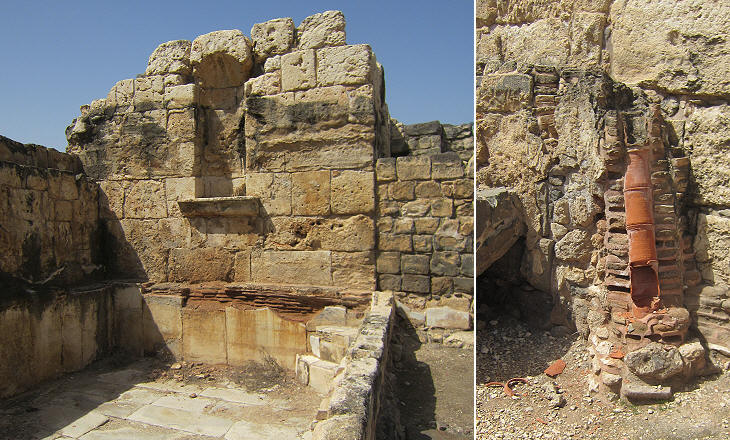 In the time of the Crusades the city was known both as Scythopolis and Bethshan. It is described as a small place, with extensive ruins of former edifices and many marble remains. The Franks transferred the episcopal see, as an archbishopric, to Nazareth; which thus first became the seat of a bishop. Beisan, though weak, was gallantly defended by its inhabitants against Saladin in 1182; although the very next year it was deserted on his approach, and, after being plundered by him, was consigned to the flames. Robinson
Usually the huge walls of Roman baths have survived to the present day (e.g. Diocletian's Baths in Rome), but this has not occurred at Scythopolis, where perhaps they were dismantled to be used as material for building houses after the 749 earthquake. During the Arab period the centre of the much reduced town shifted towards the amphitheatre area. At the time of the Crusaders Scythopolis was part of the fiefdom of Belvoir, a fortress on a commanding position in the Jordan Valley. 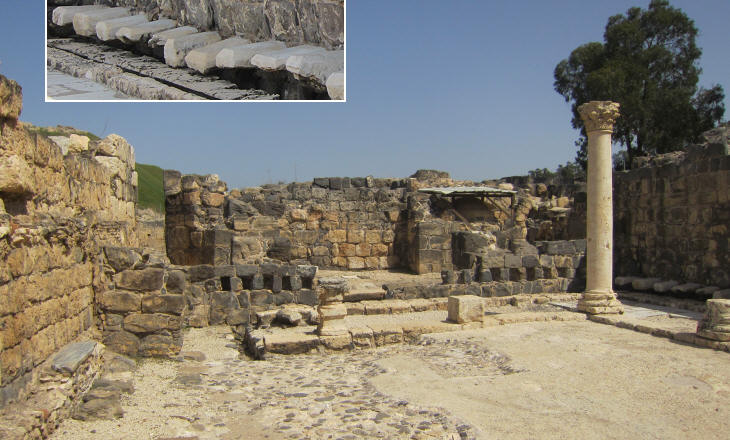 You may wish to see similar facilities at Sabratha in Libya, at Ostia near Rome or at Thugga in Tunisia.
The image used as background for this page shows a cross painted on a small apse near the Western Baths.