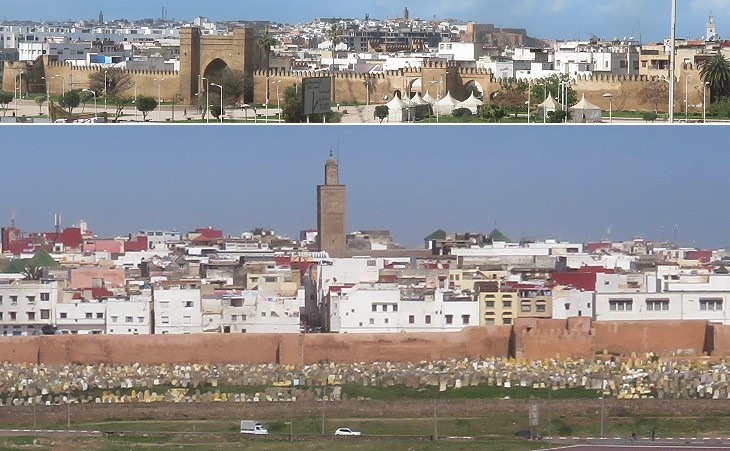 (above) The southern walls of Salé; (below) the town seen from the Kasbah of the Udayas of Rabat

It is most pleasantly situate upon the Ocean sea-shore, within halfe a mile of Rebat; both which townes the river Buragrag separateth insunder. The buildings of this towne carrie a shew of antiquitie on them, being artificially carved and stately supported with marble pillers. Their temples are most beautifull, and their shops are built under large porches. (..) And (to say all in a word) here is nothing wanting, which may be required either in a most honourable citie, or in a flourishing commonwealth. Moreover hither resort all kinde of merchants both Christians and others. Here the Genowaies, Venetians, English and lowe Dutch used to traffique. (..) This towne is frequented by many rich merchants of Genoa, whom the king hath alwaies had in great regarde; because he gaineth much yeerely by their traffique. The said merchants have their aboad and diet, partly here at Sella, and partly at Fez: from both which towns they mutually helpe the traffique one of another.
Leo Africanus - The history and description of Africa: and of the notable things therein contained - 1526 - 1600 translation by John Pory
The river of Sallee was formerly a port capable of receiving large ships; but the sand has now so choaked up the entrance, that ships of two hundred tons cannot enter it till their guns and ballast are taken out. (..) Sallee was a kind of republic, feudatory to Moulay Ismail, the people of which addicted themselves to trade and piracy. (..) An old Moor, whom I knew, and who was a ship-boy on board the gallies, has assured me, they carried no cannon, that they were ballasted with flints gathered on the sea side, or the banks of the river, which was their whole ammunition; that, rowing along-side merchant vessels, which at that time were themselves ill armed, they showered such a quantity of these stones, on board, that the sailors were obliged to run, and they took possession of the ship. (..) The reigning Emperor, who has not inherited the ferocity of his forefathers, having deprived the regency of Sallee of its riches, privileges, and independence, commanded the Corsairs to act for his profit; and, considering the redemption of slaves as a source of revenue, he has treated them with more humanity.
Louis de Chénier - The Present State of the Empire of Morocco - 1788 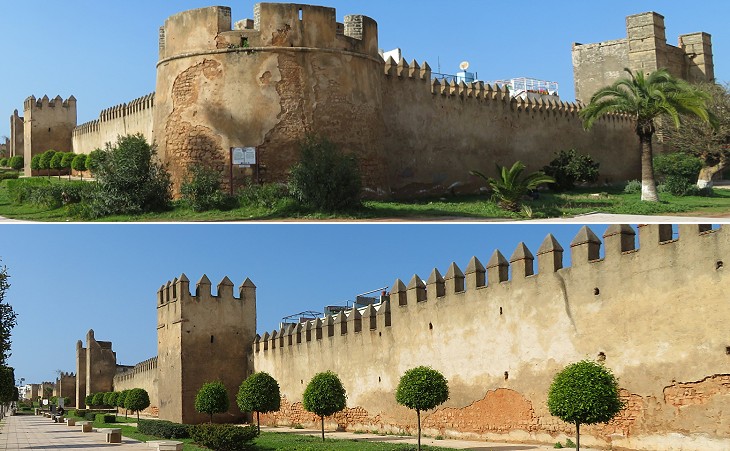 Walls on the river side where the Arsenal was situated

The town of Sale (..) is a large, populous, commercial, and well-fortified place, formerly renowned as a seat of pirates. Directly opposite, on the left or south bank, is Rabatt, scarcely less famous as a piratical station. (..) By degrees, therefore, they ceased to fit out ships, their "rovers" roved no longer, and nature itself aided the formation of peaceful habits, by barring up the entrance of their river with sand, so that large vessels can no longer enter it. (..) The walls are now much dilapidated and covered with storks' nests, or troops of the birds themselves, which, being unmolested, congregate there in great numbers, tamer than barn-door fowl. (..) The character of the Sale rovers it would be difficult to paint in colours too sombre. They were a fearless, ferocious, and merciless nest of savages, very much like the bucaniers; respected no flag, spared no nation; but attacking whatever ships they met upon the high seas, they either slaughtered the crews at the moment, or led them hither into endless captivity. They look very soft and silky now, but the native fanaticism of their character breaks out in the prohibition to all Christians to reside within their walls. Neither do they suffer the Jews. The whole population is Moorish and Arab, and does not at present exceed twenty-three thousand souls.
Thomas Roscoe - The Tourist in Spain and Morocco - 1838 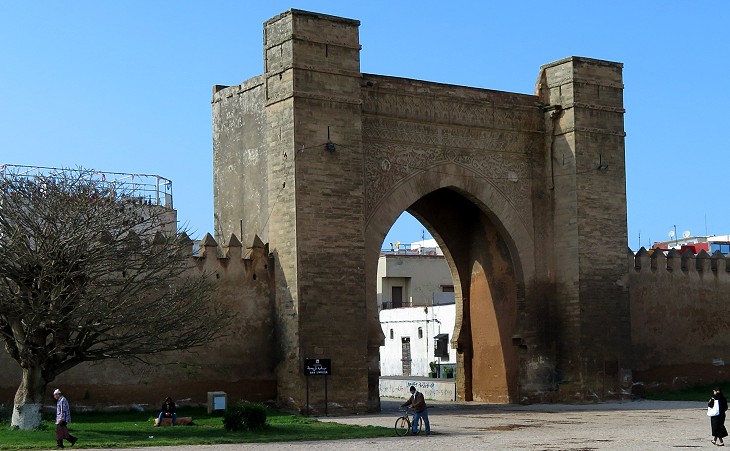 Our ship making her course towards the Canary Islands, or rather between those islands and the African shore, was surprised in the grey of the morning by a Turkish rover of Sallee, who gave chase to us with all the sail she could make. We crowded also as much canvas as our yards would spread, or our masts carry, to get clear; but finding the pirate gained upon us, and would certainly come up with us in a few hours, we prepared to fight. (..) To cut short this melancholy part of our story, our ship being disabled, and three of our men killed, and eight wounded, we were obliged to yield, and were carried all prisoners into Sallee, a port belonging to the Moors. The usage I had there was not so dreadful as at first I apprehended; nor was I carried up the country to the emperor's court, as the rest of our men were, but was kept by the captain of the rover as his proper prize, and made his slave, being young and nimble, and fit for his business. (..) Here I meditated nothing but my escape, and what method I might take to effect it. (..) After about two years (..) I found I was likely to have a little ship at my command; and my master being gone, I prepared to furnish myself, not for fishing business, but for a voyage. (..) After we had fished some time and caught nothing (..) I took him by surprise with my arm under his waist, and tossed him clear overboard into the sea. (..) I changed my course, and steered directly south and by east (..) and having a fair, fresh gale of wind, and a smooth, quiet sea, I made such sail that I believe by the next day, at three o'clock in the afternoon, when I first made the land, I could not be less than one hundred and fifty miles south of Sallee; quite beyond the Emperor of Morocco's dominions.
Daniel Defoe - The Life and Adventures of Robinson Crusoe - 1719 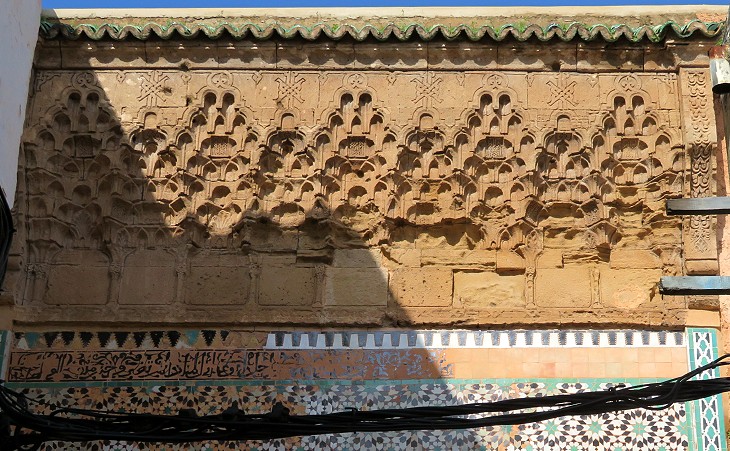 The fame of Salé, today almost a neighbourhood of modern Rabat, is associated with having been a pirate's nest in the XVIIth and XVIIIth centuries, but the town retains some interesting monuments which were built at an earlier time by the Almohad and Marinid dynasties. 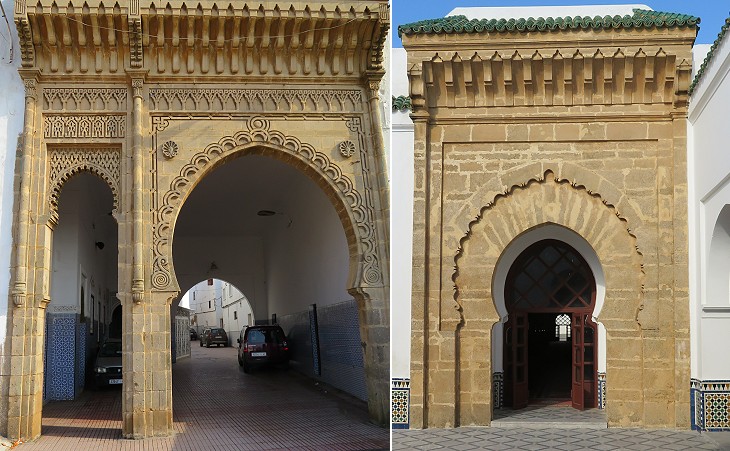 (left) Exit to the sea from the walled town; (right) portal of the Great Mosque

A law introduced during the French Protectorate forbids non-Muslims to access mosques. Limitations to visits to mosques exist in many countries, but usually tourists are allowed to enter the main courtyard, or at least a corner of it (e.g. at the Great Mosque of Tunis), and gain an idea of the layout and decoration of the building. The law was aimed at avoiding that a maybe unintentional blasphemous behaviour by non-Muslim visitors could stir a reaction from the believers. It still applies today. From the outside the view of the Great Mosque of Salé is void of interest, because, similar to other great mosques in Morocco (e.g. that of Fez), the building is surrounded by small houses and shops and it is difficult to notice its existence from the street. 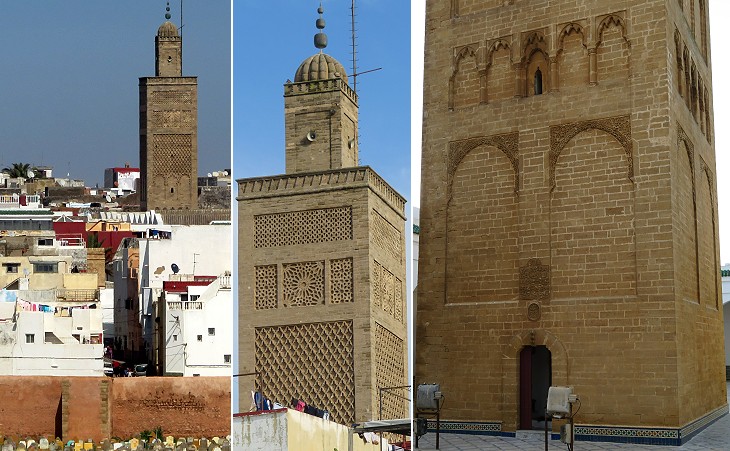 Minaret of the Great Mosque

The main visible architectural feature of the Great Mosque is its square minaret which was built at the same time (end of the XIIth century) as that of the Great Mosque of Rabat by Almohad Sultan Yaqub al-Mansur. The minaret of Salé was damaged by the ravages of time (it is much closer to the Ocean than the other one) and by a shelling of the town by the French in 1851. The current minaret is a reconstruction aimed at making it very similar to that at Rabat. 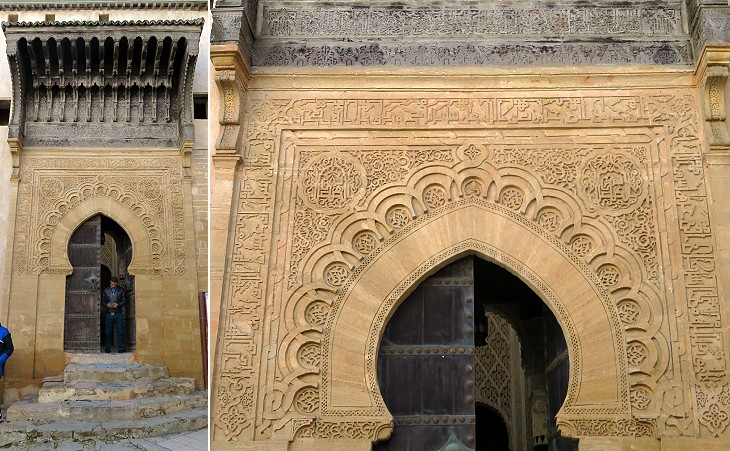 The Marinid rulers of Morocco who took over from the Almohads in 1240 built some very fine medreses (Koranic schools). Sultan Abou al-Hassan ibn Othman was known as the Black because his mother was from Abyssinia. He is buried in the Marinid necropolis of Chellah, off the southern walls of Rabat. 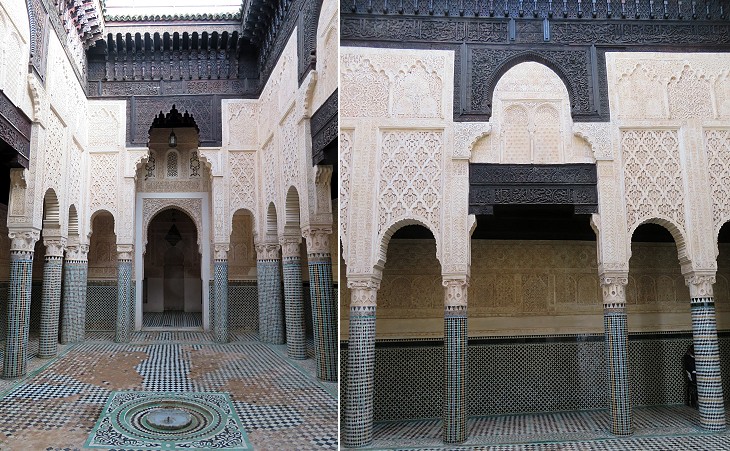 Abou al-Hassan established an alliance with the Nasrid King of Granada, but his attempts to re-establish Muslim suzerainty in Spain failed at the Battle of Rio Salado near Tarifa in 1340. It is known that the King of Granada travelled to Morocco to discuss about the alliance; there might have been other meetings between the two sides. As a matter of fact the decoration of this small medrese brings to mind that of the Nasrid palaces of Granada. 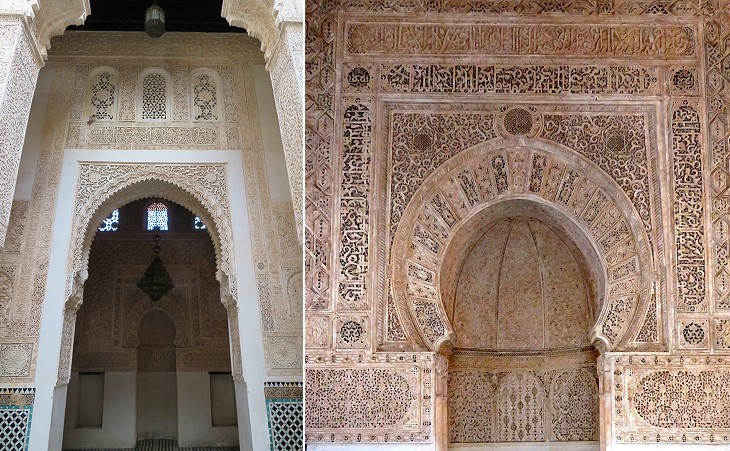 Medrese Abou al-Hassan: (left) prayer room; (right) mihrab, niche indicating the direction of Mecca; the image used as background for this page shows a detail of the ceiling

Abou Inan, the son of Abou al-Hassan built similar, but larger medreses at Fez and Meknes. 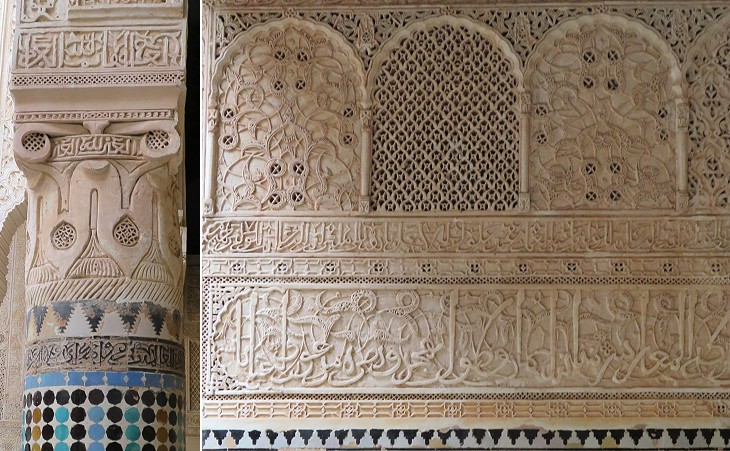