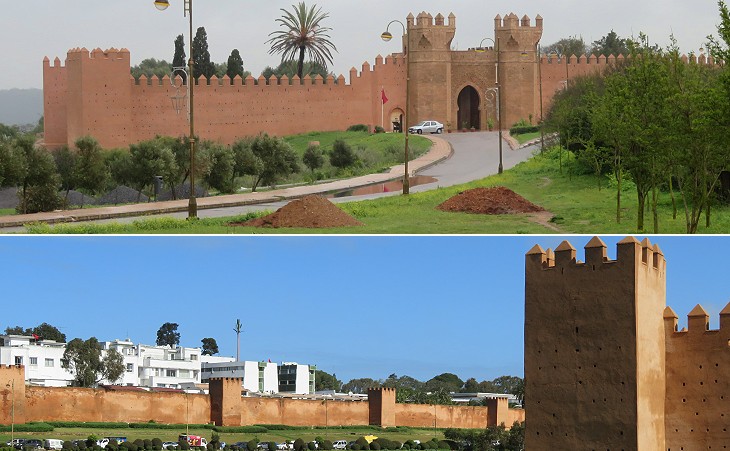 (above) Walls of Chellah; (below) Almohad southern walls of Rabat opposite Chellah

This towne was built by the Romans upon the river of Buragrag, two miles from the Ocean sea, and a mile from Rebat: from whence, if a man will goe to the sea, he must take Rebat in his way. (..) King Mansor (Abu Yusuf Yaqub al-Mansur, Almohad Caliph in 1184-1199) caused it to be walled round about, and built therein a faire hospitall and a stately pallace, into which his soldiers might at their pleasure retire themselves. Here likewise he erected a most beautifull temple, wherein he caused a goodly hall or burial chapel to be set up, which was curiously earned, and had many faire windowes about it: and in this hall (when he perceived death to seaze upon him) he commanded his subiects to burie his corpes. Which being done, they laid one marble-stone over his head and another over his feete, whereon sundry epitaphes were engraven. After him likewise all the honourable personages of his familie and blood, chose to be interred in the same hall. And so did the kings of the Marin-familie, so long as their commonwealth prospered. My selfe on a time entring the same hall, beheld there thirtie monuments of noble and great personages, and diligently wrote out all their epitaphes.
Leo Africanus - The history and description of Africa: and of the notable things therein contained - 1526 - 1600 translation by John Pory
On the eastern side of Rabat we meet with a small ruinous town called Sheila, which contains many Moorish tombs, held in great veneration. The town itself is considered as a sacred asylum, and is only permitted to be entered by Mahometans. It seems probable this was the metropolis of the Carthaginian colonies on the western coast of Africa.
Louis de Chénier - The Present State of the Empire of Morocco - 1788 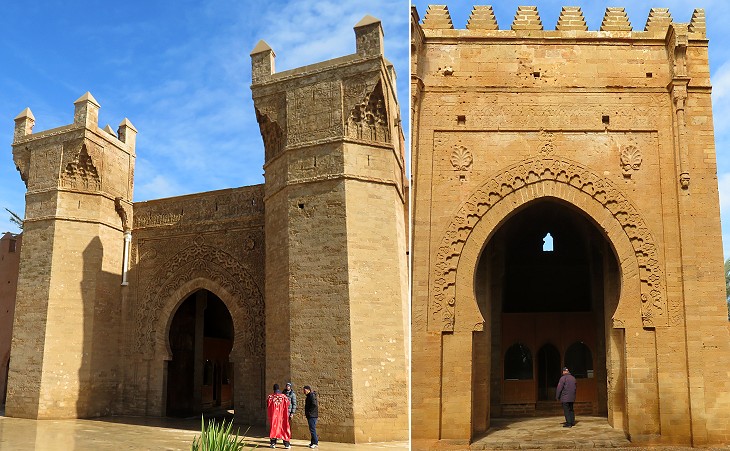 Our guide pointed out to us in the distance, - but too much so for my eyes, - the ancient castle of Shallah, which contains, he said, the tombs of the royal family of the Beni Merini, and is therefore regarded as an inviolable sanctuary. Neither Christians nor Jews, as I found upon inquiry, are permitted to enter this holy edifice, though my cicerone seemed confident that the governor would, in our case, depart from the established practice. But we were unwilling to presume so far upon his goodness. Antiquarians, as usual, are divided respecting the origin of this castle; some supposing it to be a Roman work, while others, more bold and poetical, throw back its erection to the period of the Carthaginians, the citadel of whose metropolis in these regions they imagine it to have been.
Thomas Roscoe - The Tourist in Spain and Morocco - 1838 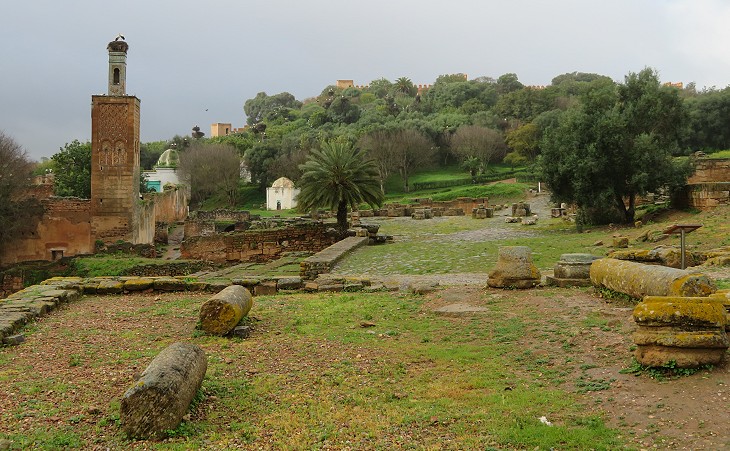 The Marinid dynasty originated from a Berber tribe. They gained control of Rabat, Meknes and Fez in the 1240s; they eventually set their residence at Fez where they founded a new town at the side of the old one. In 1340 they were defeated by a joint Portuguese and Castilian army near Tarifa on the Spanish side of the Strait of Gibraltar. The members of the dynasty were buried at Chellah until 1351, after which mausoleums were built on a commanding position at Fez.
In 1929 French archaeologists identified evidence of Sala Colonia, a Roman town, inside Chellah. Today its remains are combined with those of the Marinid necropolis and together they make up a very evocative site. 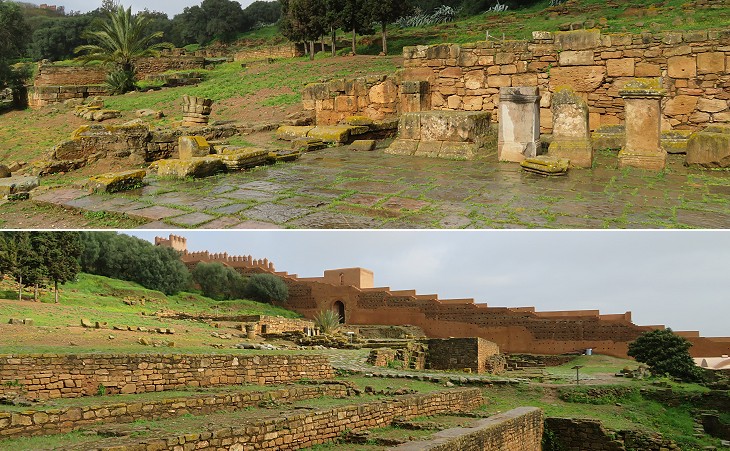 Sala: (above) Forum; (below) terraces upon which the Roman town was built

The Roman town stood on the slope of a hill near the left bank of the Bouregreg River near the point where it emptied into the Ocean. In antiquity the mouth of a river was an excellent location for establishing a port, more so when the sea was not the relatively calm and without tides Mediterranean Sea, but the often stormy and with major tides Atlantic Ocean. Sala is a miniature town, but it has all the features and public buildings of a typical Roman settlement, including public baths (see them in the introductory page). 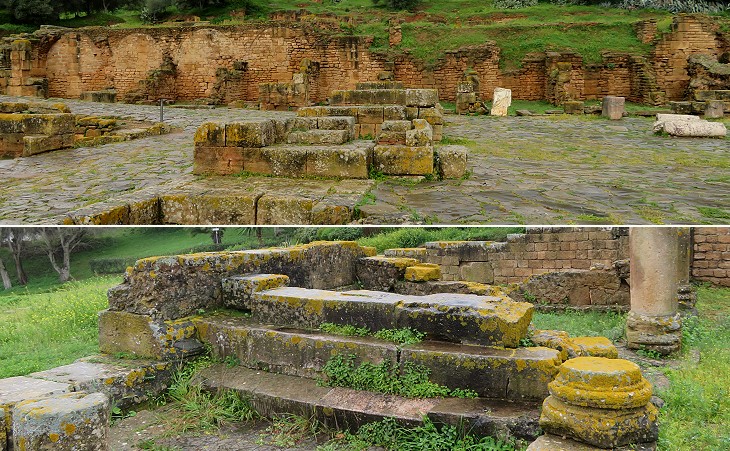 A triumphal arch gave access to the Forum and to the other main public buildings. It had three openings and it perhaps resembled the Arch of Timgad; it is supposed to have been dedicated to Emperor Antoninus Pius, but no inscription was found. The erection of a Capitolium, a temple dedicated to Jupiter, Juno and Minerva, the three deities who were worshipped on the Capitoline Hill of Rome was a must for a provincial town and archaeologists suggest this was done at the time of Emperor Claudius, soon after the region passed under direct Roman rule. The temple might have been redesigned in the early IInd century AD (you may wish to see the Capitolia of Thugga and Sufetula in Tunisia). 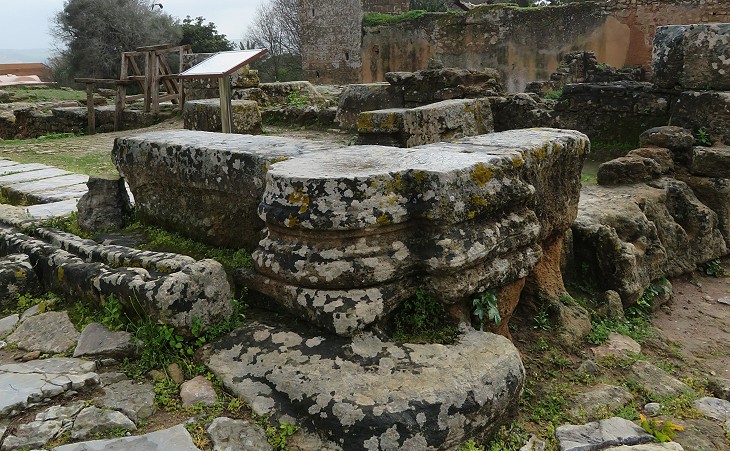 The Forum of Sala had a basilica which housed the sessions of the local Senate and of the tribunal; more in general it was the place where political and business matters were discussed. That at Sala was dedicated to Emperor Trajan who built an imposing basilica in Rome. Some scanty remains of the building show it was designed using some typical Roman features, e.g. decorative semi-columns. 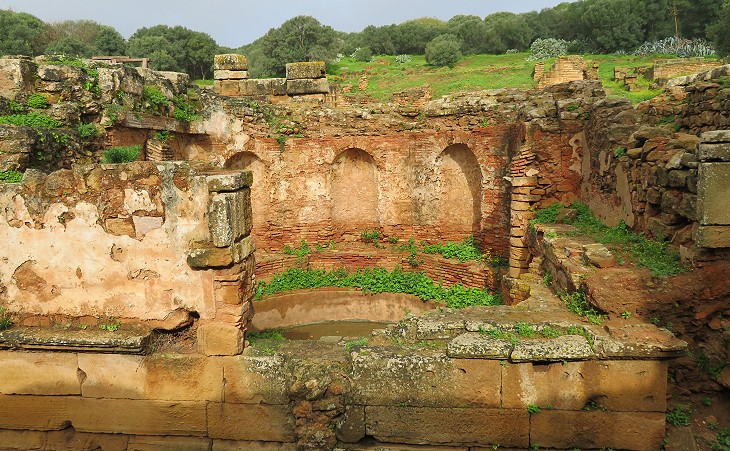 This building is situated near the Basilica, but at a lower level; how it was accessed and its purpose are not entirely clear because it was modified by the Marinids. The niches most likely housed statues, similar to what occurred in a nymphaeum, a monumental fountain (see Ninfeo di Egeria near Rome). 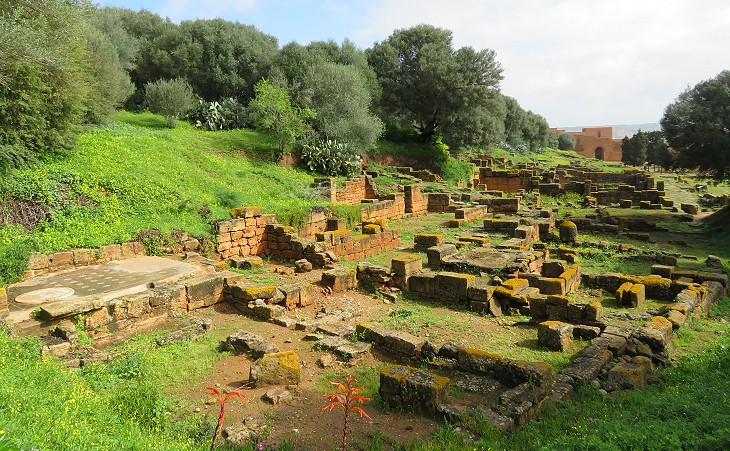 The initial excavations focussed on the area of the Forum which was more likely to have been embellished with works of art. Their scope was eventually enlarged in order to identify the whole structure of the Roman town. This led to the discovery of a neighbourhood of workshops and small houses. It was not linked to the activities of the river harbour because it is situated higher up on the hill. 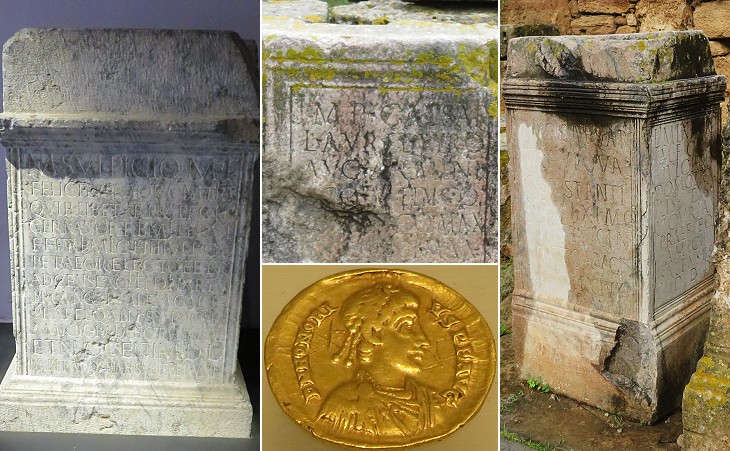 (left) Archaeological Museum of Rabat: inscription on the pedestal of a statue to M. Sulpicius Felix; (centre-above) Sala: inscription mentioning Emperor Lucius Verus; (centre-below) Archaeological Museum of Rabat: golden coin of Emperor Honorius which was found at Sala; (right) Sala: pedestal which was utilized at a later time for a statue of Emperor Constantine

The pedestal of the statue to M. Sulpicius Felix contains a detailed summary of his military career which has allowed archaeologists to establish that he came to Sala during the rule of Antoninus Pius to protect and defend the town from the threats of the Autololes, a bellicose tribe mentioned by Pliny the Elder. The construction of a vallum, a line of fortifications, some miles south of Sala is attributed to Sulpicius Felix. It marked the southern limit of Mauretania Tingitana, the Roman province. At the end of the IIIrd century Emperor Diocletian moved the border northwards to Lixus and the citizens of Sala could no longer rely on military help. They continued however to erect statues to the Roman emperors and to use their coins, but the inscription on the pedestal of the statue of Constantine specifies it was made by Res Publica Salensium, a wording which indicates an independent town. 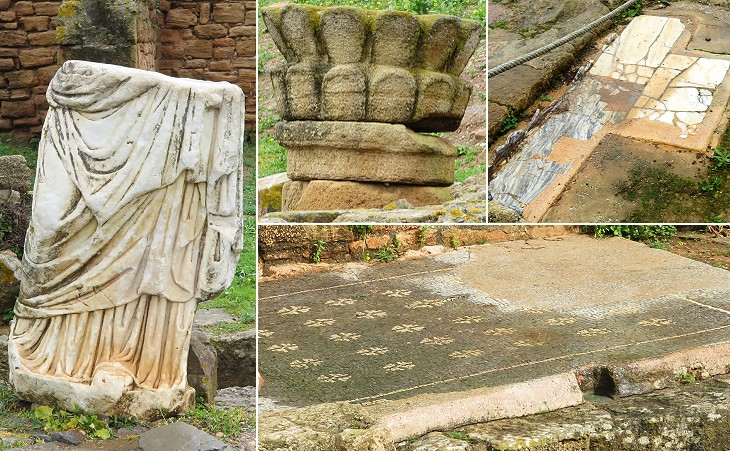 Sala: fragments of statues, capitals and floors; the image used as background for this page shows the head of a statue at the Archaeological Museum of Rabat

Sala maintained links with the territories of the Roman Empire even after the Vandals invaded Northern Africa in 429. These links lasted until the end of the VIIth century. Around 1030 a new port was established on the right bank of the Bouregreg. It was called Salé; it eventually expanded on the left bank of the river where a ribat (fortress) was built. This settlement later on became a town of its own, today's Rabat. 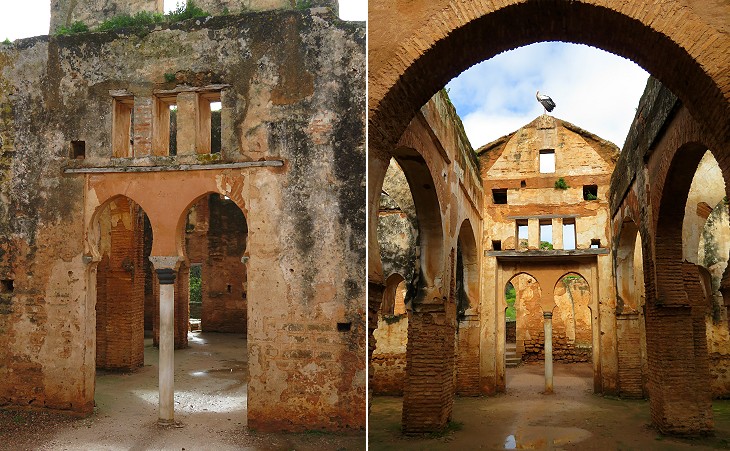 In 1284 Marinid Sultan Abu Yusuf Yaqub built a funerary mosque for himself and his wife next to an existing mosque which he rebuilt near the Forum of the Roman town. His successors developed the site which was surrounded by walls with a monumental gate. 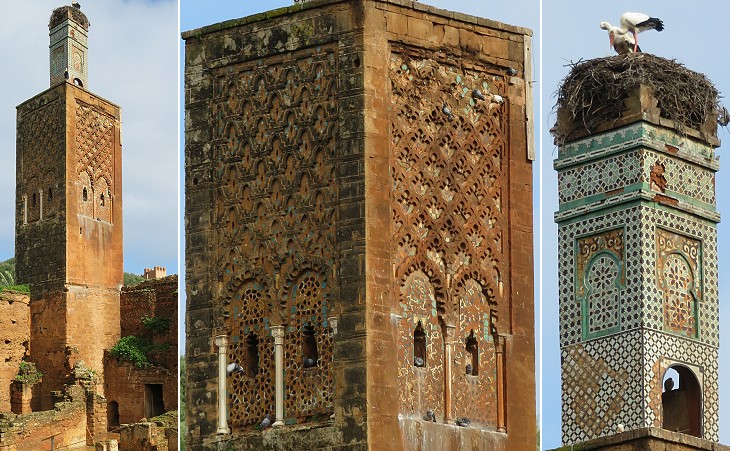 The design of the minaret follows the pattern established in the Giralda of Seville and in the Tour Hassan of Rabat by Almohad architects. This type of square minaret which characterizes most Moroccan mosques can also be seen in towns of Tunisia where Muslims who were forced out of Spain settled (e.g. Testour). Chellah: portal of the mosque

Zellige is a form of tilework which is typical of Morocco and Moorish Spain. It is made of individual tiles inserted into a plaster frame to obtain a decorative design, very often in the form of a star having 12 or 16 points. The combination of blue and turquoise is typical of Islamic art and can be seen in particular in monuments of Turkey, e.g. at Tokat, and Iran, e.g. at Yazd. The horseshoe arch was developed in Spain, especially in the construction of the Great Mosque of Cordoba, after patterns created by the Visigoths. 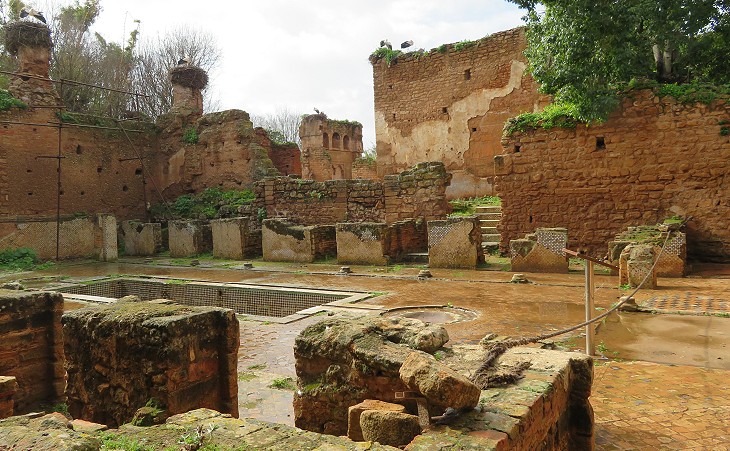 The Marinid Sultans built a medrese near the mosque. The building almost totally collapsed in the following centuries, but its layout is still noticeable; the cells for the students and the teachers were situated around a courtyard which resembled a Roman peristyle and was embellished by a fountain. Similar layouts can be seen in many medrese in other countries, e.g. at Edirne.
You may wish to see other Marinid medrese at Salé, Fez and Meknes. 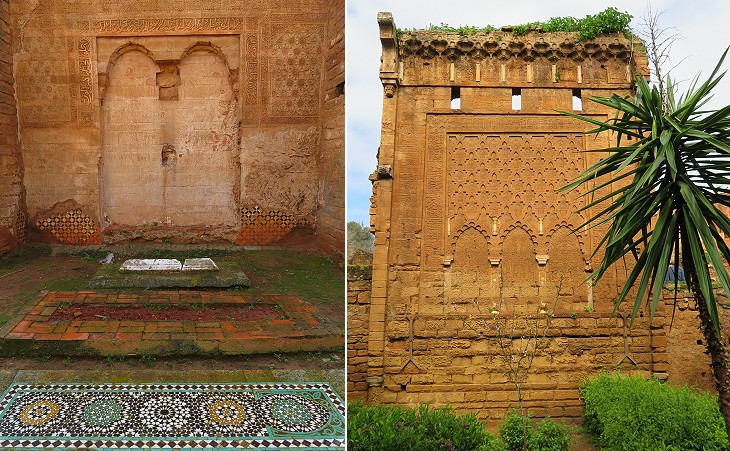 Chellah: Mausoleum of Abou al-Hassan, the last Sultan to be buried at Chellah

The Mausoleum is also known as that of the Black Sultan, because of the dark complexion of Abou al-Hassan. The qibla side, i.e. that facing Mecca, is a solid masonry wall, elaborately decorated on its outside. Abou al-Hassan brought the Marinid power to itz zenith as he managed to conquer Algeria and most of Tunisia, but he was unable to quell a revolt in the latter country. In 1348 his son Abou Inan claimed the throne for himself and Abou al-Hassan was forced to hide in the Atlas Mountains. He died in 1351 and his son arranged state funerals. 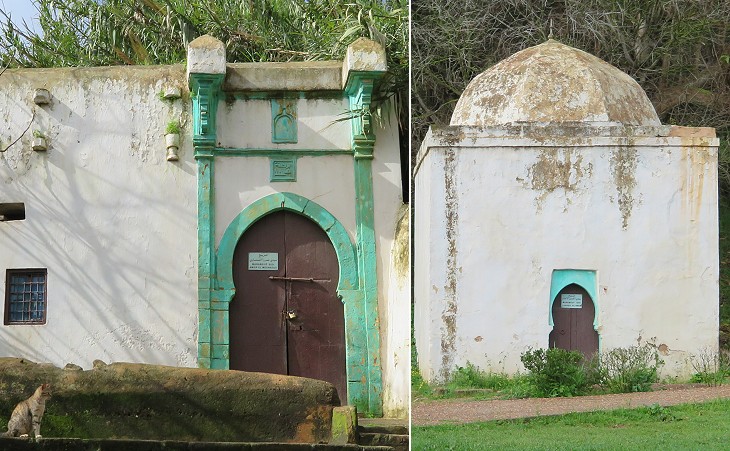 Marabouts are religious teachers or holy men (Sidi) in Muslim West Africa. Their tombs are often the site of pilgrimages and in some instances they are elaborate mausoleums (zaouia), which were often built many centuries after the death of the marabout, e.g. Zaouia Sidi Abid el-Ghariani at Kairouan or Zaouia Sidi Mohammed ben Aouissa at Meknes. 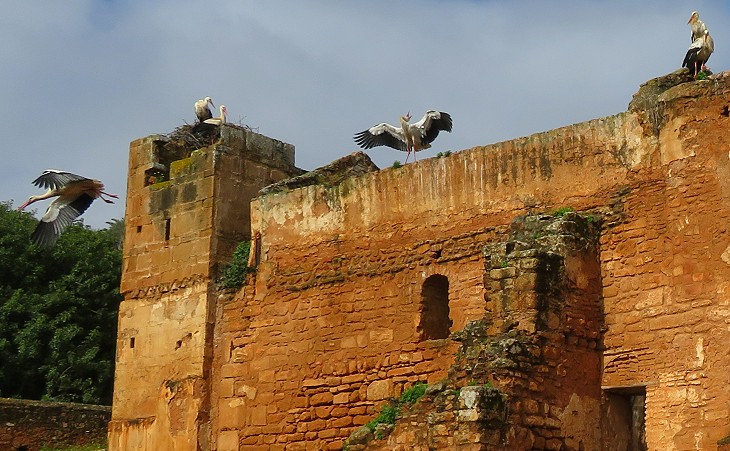 Bouregreg, the name of the river, means "of the storks" and all visitors to Chellah easily understand why. These birds have a penchant for ancient monuments: crumbling aqueducts at Merida, isolated columns at Silifke and Volubilis, pointed kumbet at Karaman.