If you came to this page directly, you might wish to read page one first. 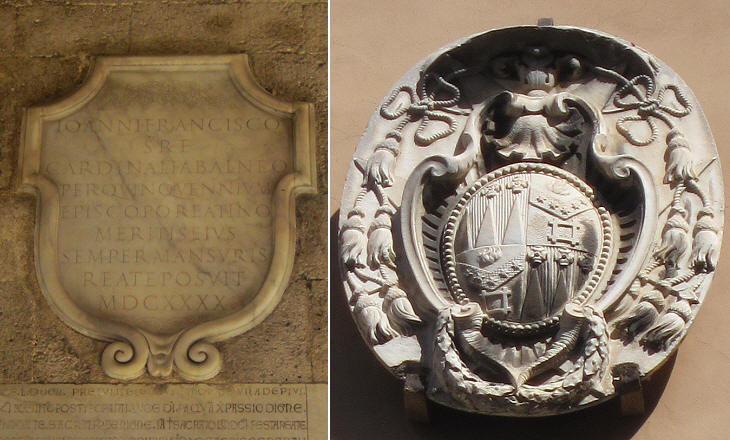 (left) Inscription celebrating Cardinal Giovanni Francesco Guidi di Bagno in the Cathedral, Bishop of Rieti in 1635-1639; (right) coat of arms of Cardinal Ippolito Vincenti Mareri (1738-1811) in Palazzo del Comune. He was born in Rieti and he founded charitable institutions in his town, but he was not its bishop

Rieti returned under the direct control of the Papal State in 1425. After that year it was rarely involved in political and military events. It was run by an governor appointed by the pope, usually not having the rank of cardinal. This meant that issues related to the town did not receive much attention from the central government. The earthquake which struck Rieti in 1898 led to a reconstruction which did not care too much about retaining the historical aspect of the town, exception made for the buildings which had some particular features such as the windows shown above. Latin cross windows were made popular in the second half of the XVth century when they were introduced in Rome at Palazzo Venezia and at Casa dei Cavalieri di Rodi. 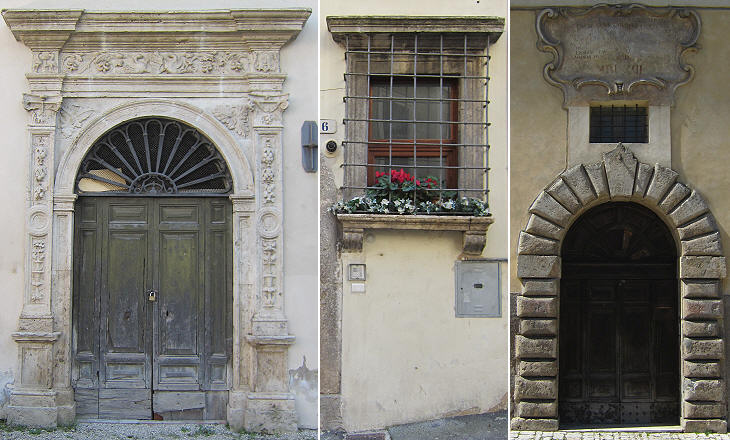 During the XVIth century Pope Paul III and Pope Clement VIII took steps to improve the emptying of the Velino River into the Nera, mainly because it caused floods at Terni, Narni and eventually at Rome. In 1787 other improvements were made and in 1896 the waterfalls started to be exploited to produce electricity. 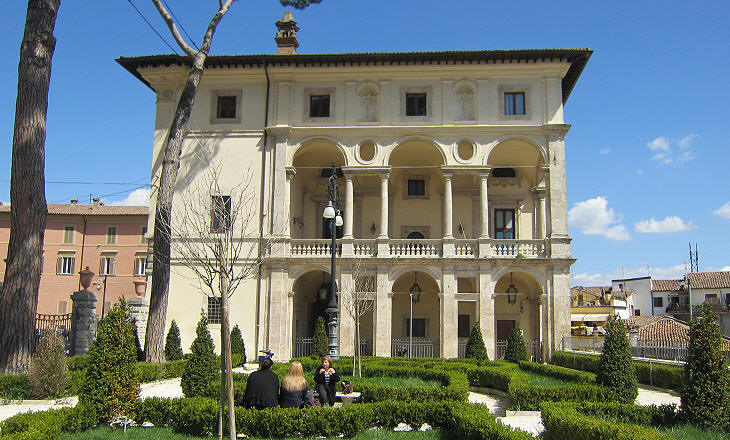 Palazzo del Governo is the finest Renaissance palace of Rieti. It is the office of the Prefetto, the representative of the central government. It was acquired in 1589 by the Vincentini, a family of wealthy landowners, who added an elegant loggia to it. In 1923 Rieti and its territory were detached from Umbria and became part of Latium. In 1927 Rieti acquired the status of provincial capital, which meant that many government offices, schools and tribunals were located in the town. 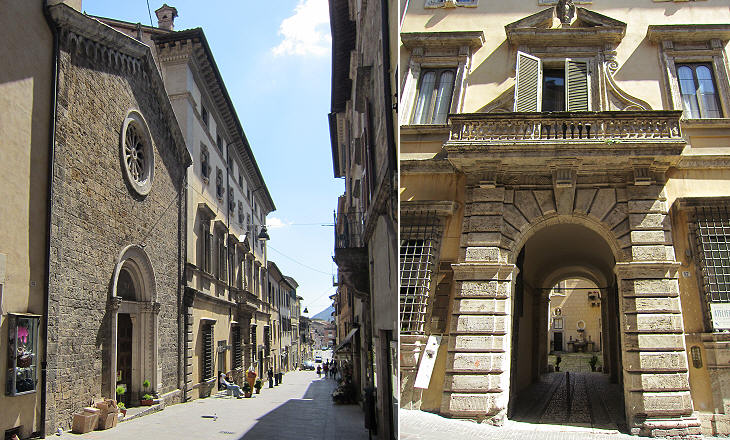 The Vecchiarelli were another family of rich landowners who in the second half of the XVIth built a palace in Rome, which is generally attributed to Bartolomeo Ammannati, a leading architect.
They then decided to build a similar palace in their hometown. 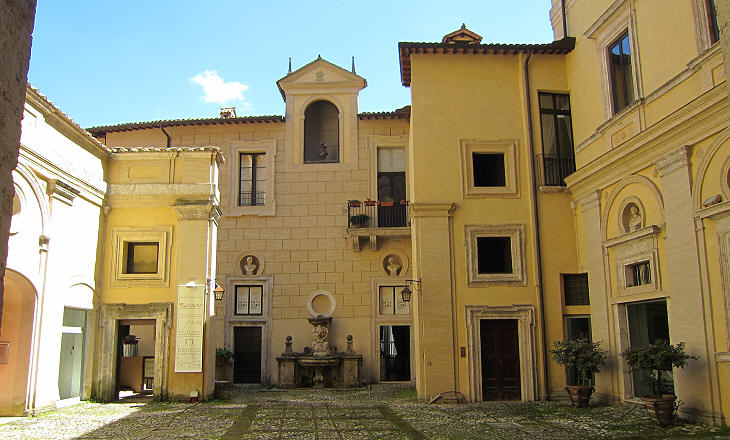 The palace was built on the basis of plans drawn by Carlo Maderno, another leading architect, but its construction took a long time and the courtyard shows architectonic elements which became popular after the death of Maderno in 1629. 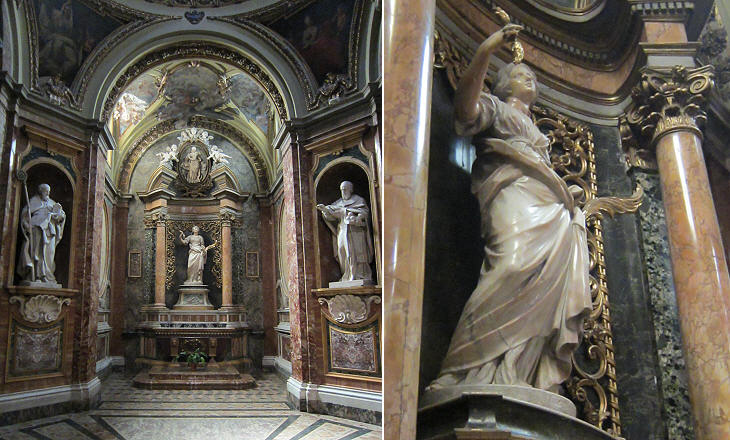 In 1639 the interior of the Cathedral was renovated in the style which was being developed in Rome by Gian Lorenzo Bernini. The renovation of the Cathedral was not completed until the end of the XVIIIth century and it was decorated by leading Roman artists. The image used as background for this page shows one of the new chapels. In 1651 Bernini was asked to assist in the design of a chapel dedicated to St. Barbara. He sent a plan of the chapel and a sketch of the statue of the saint. The latter was eventually executed by Giannantonio Mari, a sculptor of Bernini's inner circle. It is rare to see such a lavishly decorated chapel in a provincial town. 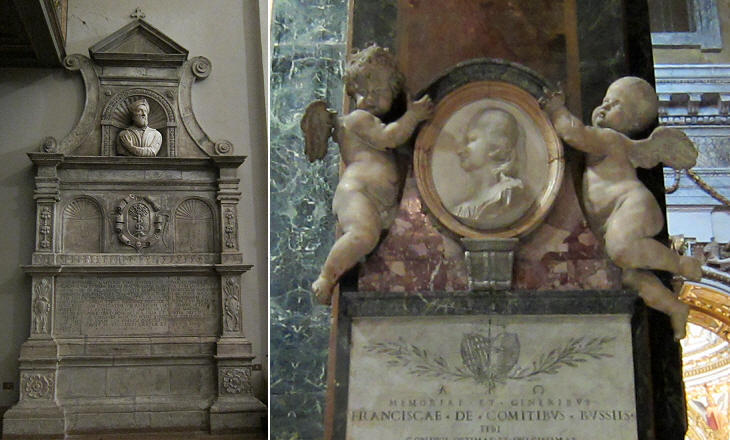 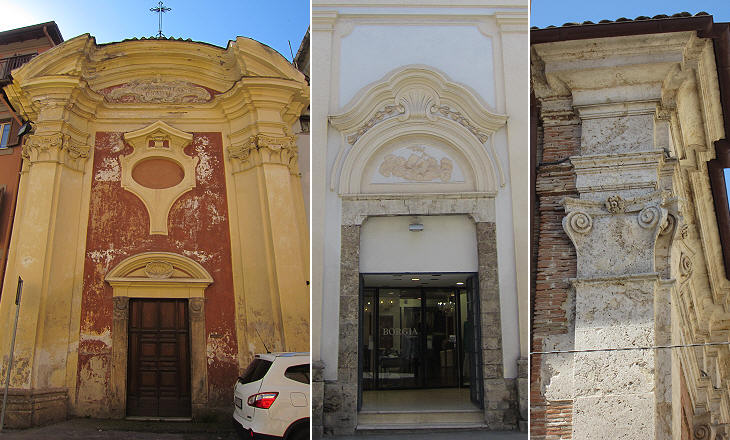 In the XVIIIth century many small churches were built which were similar to the Roman ones. S. Giuseppe has the elaborate mouldings and stuccoes typical of "Roman Barocchetto".
S. Scolastica was designed by Carlo Fontana, the leading architect in Rome after the death of Bernini. 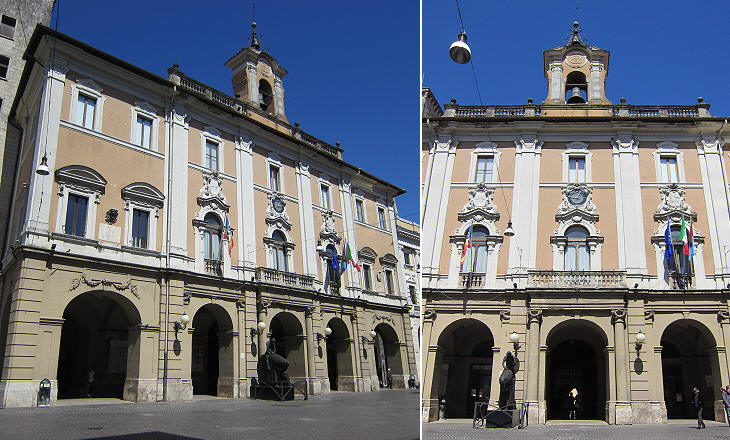 In the XVIIIth century several medieval town halls of provincial towns such as Nepi were given a modern façade. At Rieti Palazzo Comunale was redesigned in 1748, by Filippo Brioni, an architect who worked at the completion of the Cathedral too. The building was slightly modified in the XXth century.

Return to Rieti - Roman and Medieval Monuments or to the Archaeological Museum of Rieti.