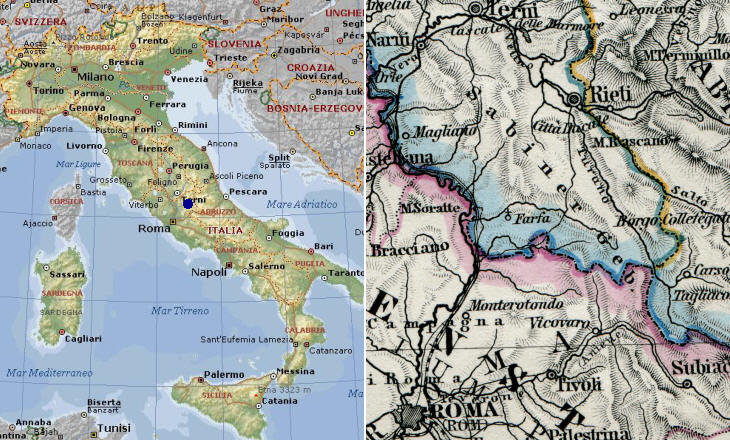 (left) Modern map of Italy: the blue dot indicates Rieti; (right) 1864 map where Rieti is included in Umbria (blue area), which was part of the Papal State until 1860, near the border with Abruzzo (yellow area), which was part of the Kingdom of Naples until 1860. The map shows some other towns which are covered in this website such as Terni, Narni, Farfa, Tivoli and Subiaco

In agro Reatino, Cutiliae lacum in quo fluctuat insula
Italiae umbilicum esse: M. Varro tradit.
Pliny the Elder - Historiae Naturalis - Book 3 - 109
In the territory of Reate is the Lake of Cutiliae, in which there is a floating island,
and which, according to M(arcus Terentius) Varro, is the navel or central point of Italy.
Translation by John Bostock and H. T. Riley

The Lake of Cutiliae is a small pond situated a few miles east of Rieti. It does not have any longer a floating island, which perhaps was made of pumice stone. Umbilicus Italiae, the navel of Italy, is situated in Piazza S. Rufo, a small square in the centre of Rieti. Umbilicus Urbis, the navel of Rome, was a small circular building in the Forum. 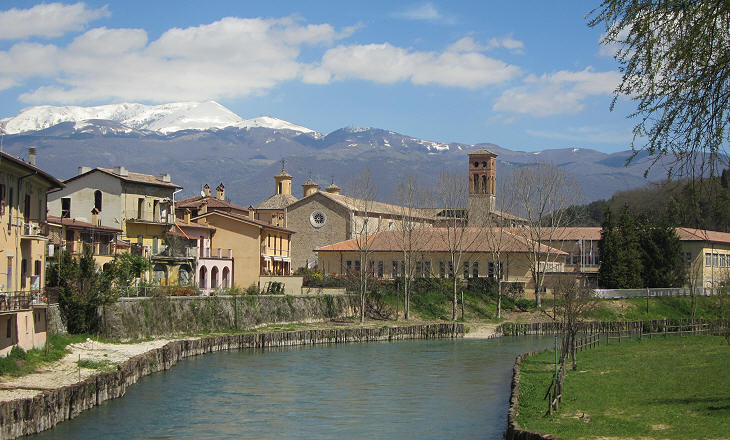 View of the Velino River, S. Francesco and Mount Terminillo in the background

Rieti is located in a very central position of the Italian peninsula, but this geographic advantage did not contribute to its development because it is surrounded by high mountains and it is not crossed by important roads, exception made for Via Salaria which links it to Rome.
This isolation explains why very few Grand Tour travellers visited it. Even today most Romans know the town only because they cross it when going to Mount Terminillo to ski. 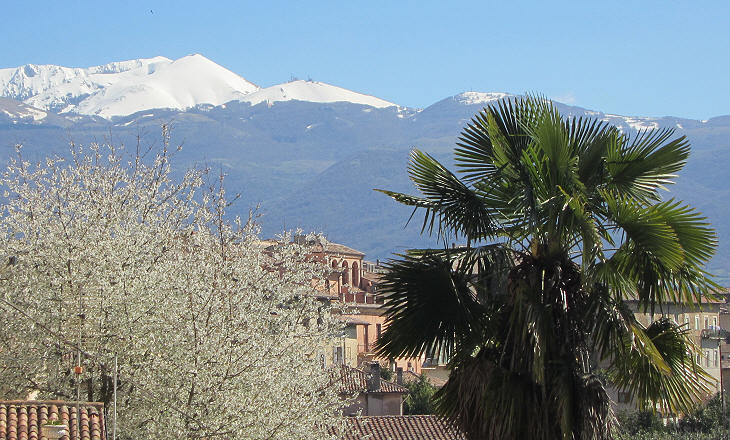 The monuments of Rieti did not attract many foreign visitors and in 1875 Augustus J. C. Hare, the author of Days near Rome, a guidebook to the environs of Rome, thought they might have been more interested in its countryside life which he described with perhaps too much enthusiasm:
No more joyous spot is there on earth than Rieti in the vintage season, when all the population swarms forth from their hive to gather in the rich purple and amber clusters and heap them into waggons drawn by great meek- eyed oxen, or pile them up in panniers on the backs of asses, which the children have crowned with leafy garlands snatched from the vines. Half-naked boys, graceful as fawns and brown as satyrs, perch themselves in the trees to which the vines cling, and throw down the grapes with jest and song to the laughing girls below: matrons in picturesque red boddice and snowy head-gear superintend; children frolic round and steal grapes; spare and swarthy men complete the scene, and over all is a turquoise sky - radiant sunshine - everywhere laughter and song!

The coat of arms of Rieti shows a young woman, a personification of the town, giving a standard to a knight who is supposed to represent Manius Curius Dentatus, the Roman consul who drained the marshy lake created by the Velino River, by digging a canal to allow its water to empty into the Nera, a river which in turn empties into the Tiber, with an impressive waterfall (Cascata delle Marmore). You may wish to see it in a painting by Giambattista Bassi (1784-1852) - it opens in a separate window.
The three fishes in the lower part of the coat of arms are perhaps a reference to the ancient lake. The drainage of the marsh made the area around Rieti suitable for farming and it attracted Roman settlers. Rieti has dedicated a monument to Marcus Terentius Varro, a very prolific writer of the Ist century BC, who was born at Rieti and whose works we know mainly through quotations by other authors, e.g. Pliny the Elder. Rieti has dedicated its theatre to Emperor Vespasian who was born in the environs of the town.

During the centuries which followed the fall of the Roman Empire the maintenance of the Velino river bed was discontinued and Rieti and its countryside were flooded repeatedly. Eventually the level of the river bed rose and the bridge through which Via Salaria entered the town was almost buried by sediments. It was so well built that its central arch still stands. 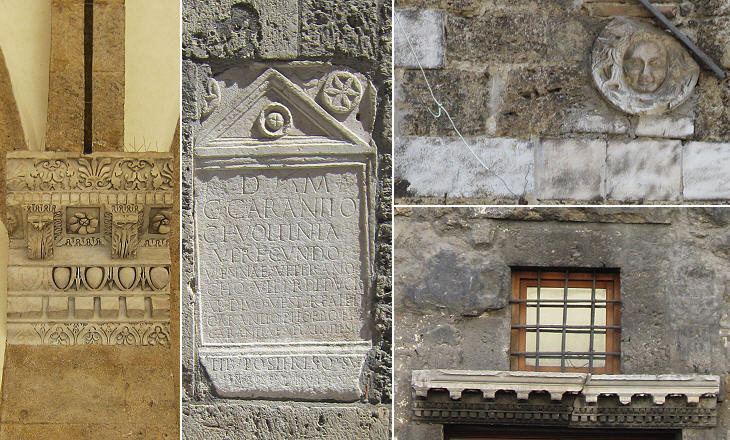 Roman memories: (left) part of a lintel in the portico of the Cathedral; (centre) funerary inscription of a veteran from Vienne to whom Emperor Vespasian assigned some land near Rieti in Via Roma (see similar inscriptions in the Archaeological Museum); (right-above) relief on a medieval house in Via Roma; (right-below) lintel in Via Peschiera

Here and there ancient stones are evidence of the period when Rieti (Reate in Latin) was a flourishing Roman town. Most of its ancient buildings are buried in the ground. The houses along Via Roma were built utilizing the structures of the cardo (main north-south street) of the ancient town. Via Garibaldi, another important street of Rieti, follows the itinerary of the ancient decumanus, the main east-west street of the Roman town. 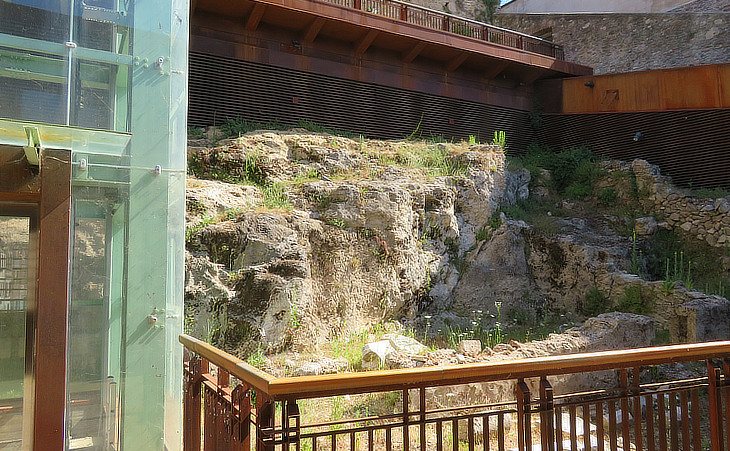 Evidence of ancient Roman walls beneath the Cathedral in Via S. Pietro Martire

In 2015 the construction of a public passenger lift which was meant to facilitate the access to the Cathedral from the lower part of Rieti unearthed sections of the walls of the Roman town. The location is very near the Archaeological Museum of Rieti which has an interesting collection of Roman reliefs and tombstones. (left) Crypt of the Cathedral; (right) a milestone of ancient Via Salaria bearing an inscription to Emperors Valentinian I, Valens and Gratian which was utilized in the construction of the crypt

The crypt of the Cathedral provides a link between the Roman and the medieval monuments of the town. It was consecrated in 1157 and it was built making use of columns and other materials taken from ancient buildings. According to tradition, St. Francis of Assisi prayed in this church when he visited the region around Rieti where he founded four monasteries. 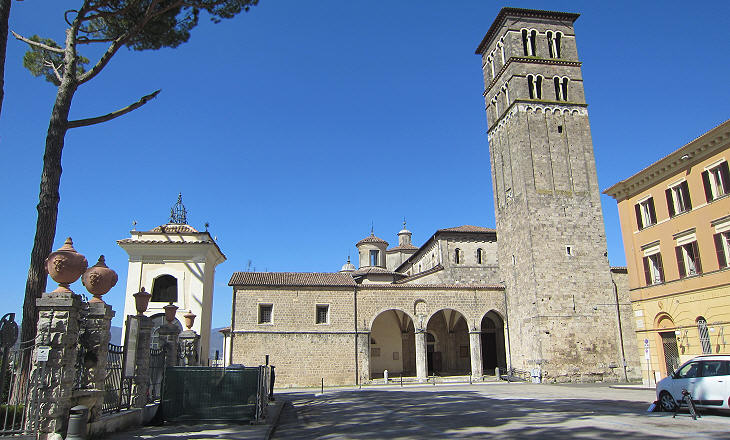 The Cathedral was consecrated in 1225, but its current aspect is mainly due to later additions/modifications. The size of the cathedral and of the bell tower is evidence of the relative prosperity of Rieti during the XIIIth century, when, although being part of the Papal State, it was ruled by its own magistrates. 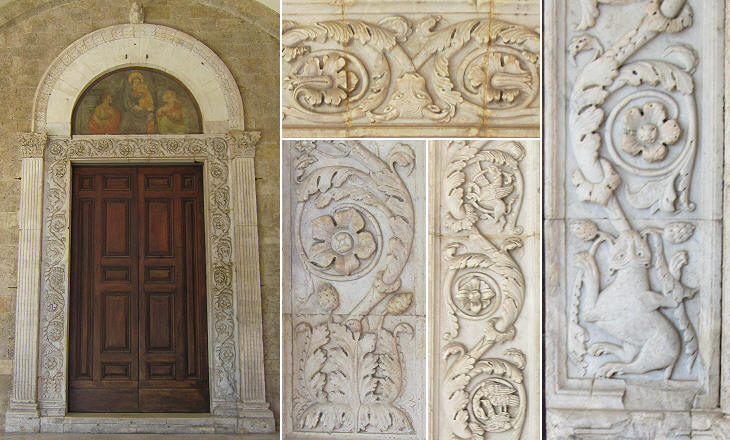 Main portal of the Cathedral and details of its reliefs

While the portico preceding the Cathedral was added in the XVth century and the interior was renovated in 1639, the main portal retains the original XIIIth century decoration. Its reliefs were very finely carved; their design was based on ancient patterns, but with the addition of some typically medieval animals. They are similar to those of churches at Narni. 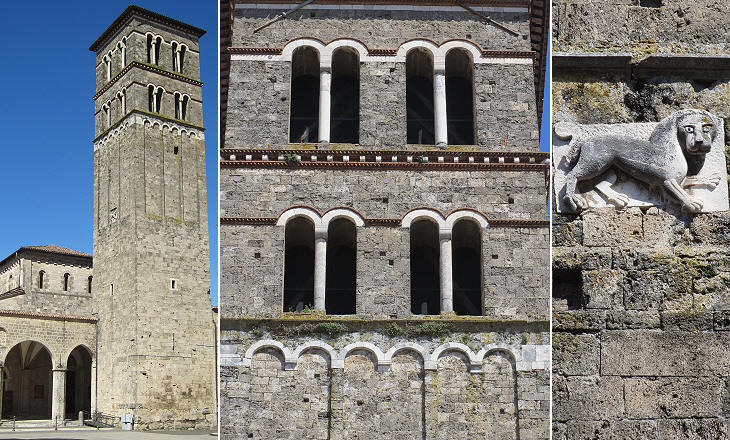 Cathedral: bell tower with details including a medieval relief depicting a lion

The bell tower was completed in 1252. At that time it was completely detached from the Cathedral and it might have had a defensive purpose in providing a commanding view over the whole plain which surrounds the town. It was damaged by an earthquake which struck Rieti in 1898, but it did not fall. 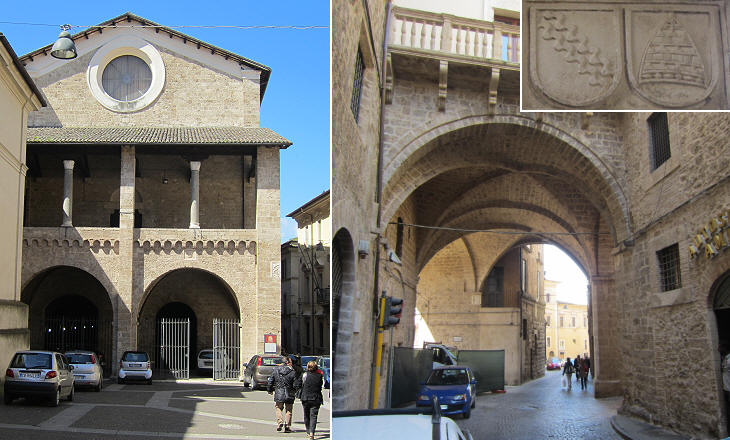 In 1288 Pope Nicholas IV who was unable to control Rome because of the conflict between the Colonna and the Orsini families, decided to relocate the papal court to Rieti, which was close to the Kingdom of Naples. The coronation of Charles II, King of Naples, took place at Rieti in May 1289. A large loggia was added to the Bishop's Palace for Pope Nicholas to bless the crowds. Pope Boniface VIII resided at Rieti during his fight with the Colonna, but an earthquake which struck the town in 1298, scared him so much that he left it. He enlarged the Bishop's Palace and he placed one of the first papal coats of arms on the arch which supported the passage to the new apartments. 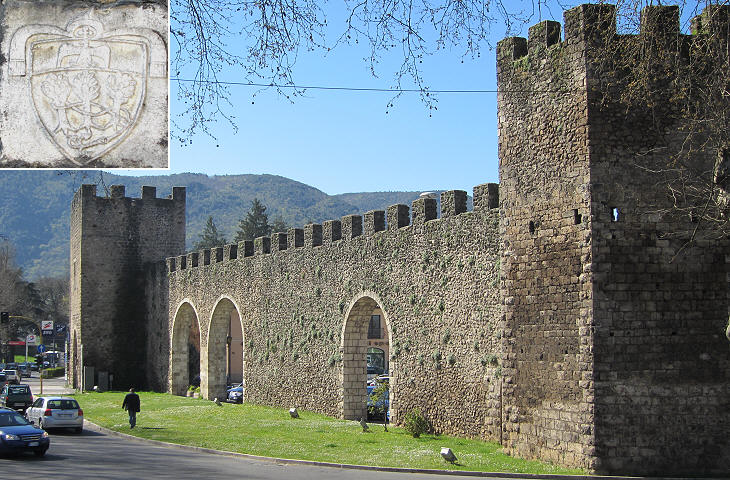 During the absence of the popes from Rome, Rieti was annexed by the Kingdom of Naples, but Cardinal Albornoz restored papal authority over the town and the border with that kingdom was fixed at a few miles east of the town, which therefore lost part of its traditional territory. During the Great Schism, a local family ruled Rieti and only in 1425 Pope Martin V managed to acquire firm control over the town.
In the following years the medieval walls of Rieti were repaired, but they were not upgraded to the needs of cannon warfare. The main medieval Catholic orders had monasteries and nunneries at Rieti. Some of them were confiscated by the State after Rieti was annexed to the Kingdom of Italy in 1860. That of the Dominicans was turned into a barracks which included the church (its bell tower can be seen in the image used as background for this page). That of the Franciscans was turned into a school, but the church with a small section of the monastery was left to the Order. 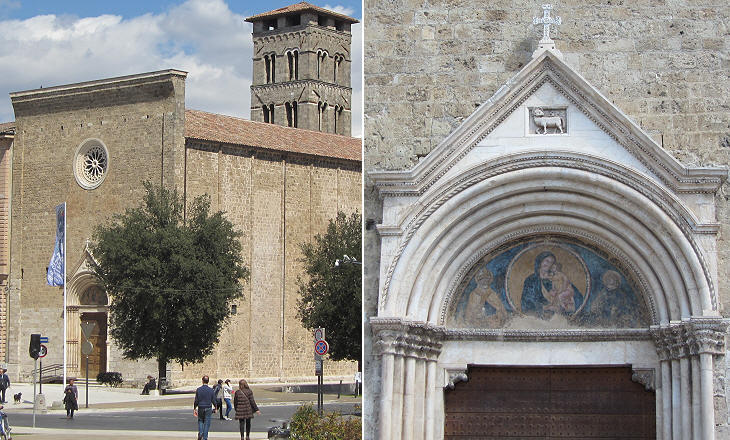 The large monastery of the Augustinians gave hospitality to pilgrims on their way to Rome along Via Salaria. The churches have plain façades which are in part due to restorations after the 1898 earthquake. The rose-window of S. Agostino was added in 1901 and that of S. Francesco in 1925. 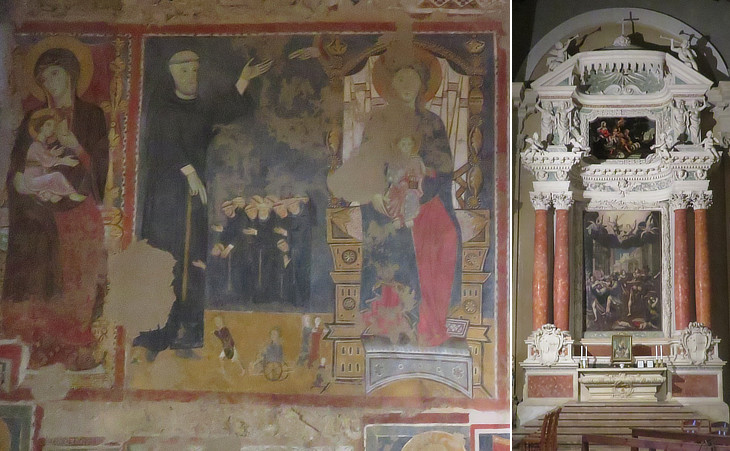 The interior of the church was modified in the XVIIth century and it was decorated in line with the fashion of the time. A recent restoration of the church unearthed some interesting old frescoes. 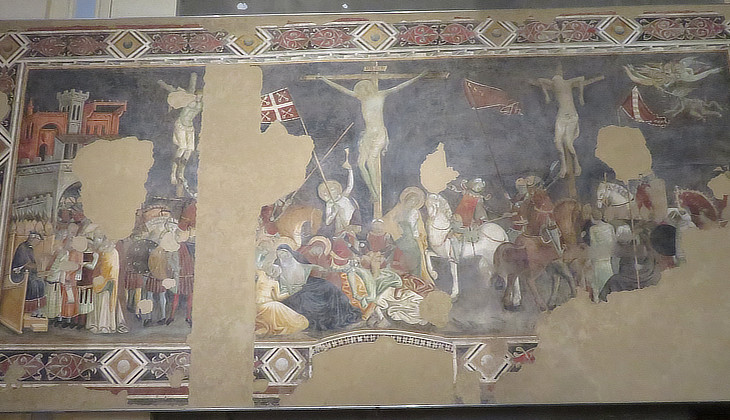 S. Agostino: Crucifixion (1430-1432), a detached fresco from the Capitular Hall of the adjoining monastery; its left side shows Joseph of Arimathea asking Pilate that he might take away the body of Jesus, the scene is set in an Italian context

Go to the Archaeological Museum of Rieti or to Rieti - Renaissance and Baroque Monuments.