November 17th. We rode to the ruined city called Kanouat. (..) Kanouat is situated upon a declivity, on the banks of the deep Wady Kanouat, which flows through the midst of the town, and whose steep banks are supported by walls in several places. To the S.W. of the town is a copious spring.
John Lewis Burckhardt - Journal of an Excursion into the Haouran in the Autumn and Winter of 1810.
The village of Qanawat in southern Syria is located on the slopes of Jebel al-Druze, a range of low mountains which today are named after the Druzes who migrated to this region from Lebanon and repopulated it in the XVIIth and XIXth centuries; these mountains are placed at the eastern edge of Hauran, a volcanic tableland which is limited on the other side by the Golan Heights and by Mt. Hermon, a major peak of the Anti-Lebanon Mountains. 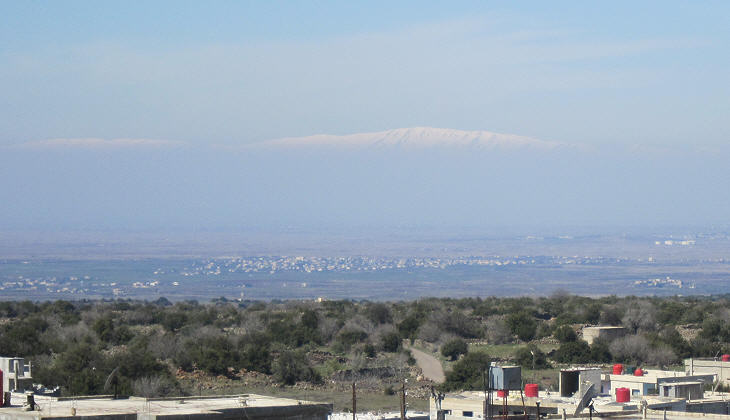 View of Hauran from the Temple to Helios at Qanawat; in the distance Mt. Hermon covered by snow

From the spring there is a beautiful view into the plain of the Haouran, bounded on the opposite side by the mountain of the Heish, now covered with snow. Burckhardt
Hauran enjoyed a period of great prosperity after being annexed to the Roman Empire by Emperor Trajan in 106 AD. At that time Qanawat was an important town called Canatha and later on Septimia Canatha, in honour of Emperor Septimius Severus; it was located at the centre of a complex system of irrigation and its current name means canals in Arabic, because of the evidence of canals dug by the Romans in its countryside. 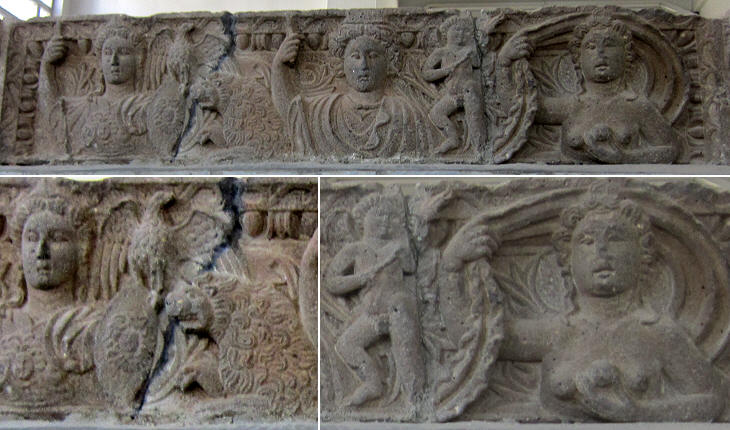 Museum of Suweida: (above) lintel from Qanawat showing Hera between Athena on her left and Eros and Aphrodite on her right (see a mosaic in Spain which depicts the three goddesses and Paris); (below) details of Athena and Aphrodite who holds the golden apple

Baal was the main deity of Syria and Lebanon prior to the conquest of these countries by Alexander the Great in 333 BC; its name varied slightly from region to region: when the Romans annexed Hauran the process of Hellenization had already replaced the local deities with those of the Greek pantheon, but often the change was just nominal (see a page on a sanctuary dedicated to Baal/Zeus).
From the above lintel and from the many mosaics found at nearby Philippopolis it appears that the decoration of public buildings as well as private houses was based on Greek gods and myths. 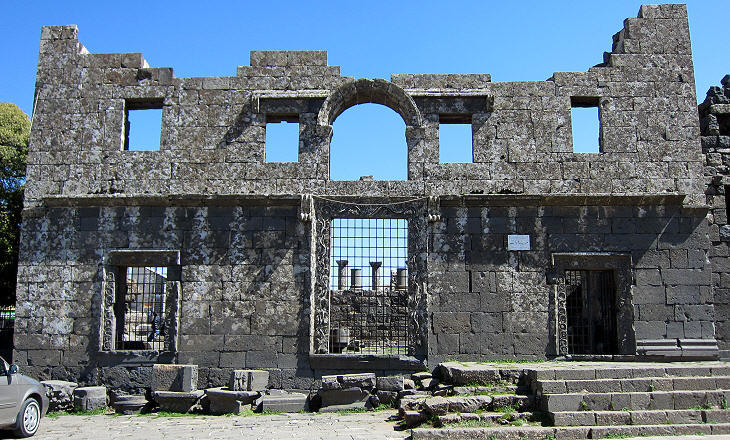 Seraya: façade of the western basilica

The principal building of Kanouat is in the upper part of the town, on the banks of the Wady. (..) The entrance of the building is on the east side, through a wide door covered with a profusion of sculptured ornaments. Burckhardt
Canatha declined after the Arab conquest in 637 and it was probably abandoned a century later when it was struck by an earthquake. The Druze settlers who repopulated it were impressed by the ruins of a complex of buildings, which they believed to be a palace, hence they called it Seraya, similar to what had occurred at Shaqqa, another village of the region. 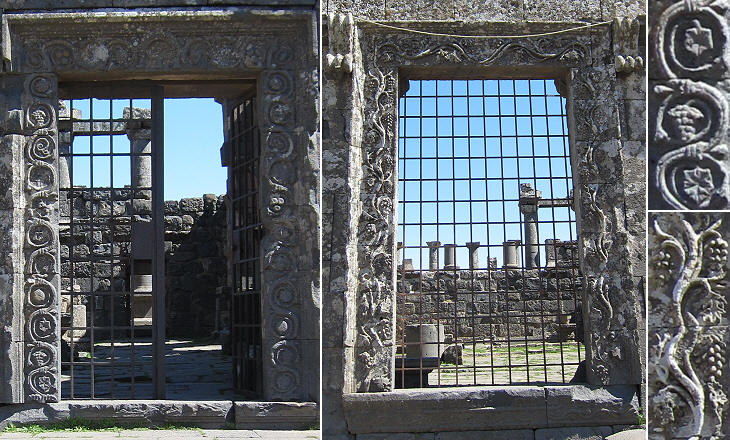 On the S. side of the area is a large door, with a smaller one on each side. That in the centre is covered with sculptured vines and grapes. Burckhardt
Seraya is actually composed of two Vth century churches which incorporated walls and porticoes of previous buildings, one of which probably housed the residence of the military commander of the region.
The façade of the western basilica was built in the Vth century, but the frames of its three entrances were taken from earlier buildings. 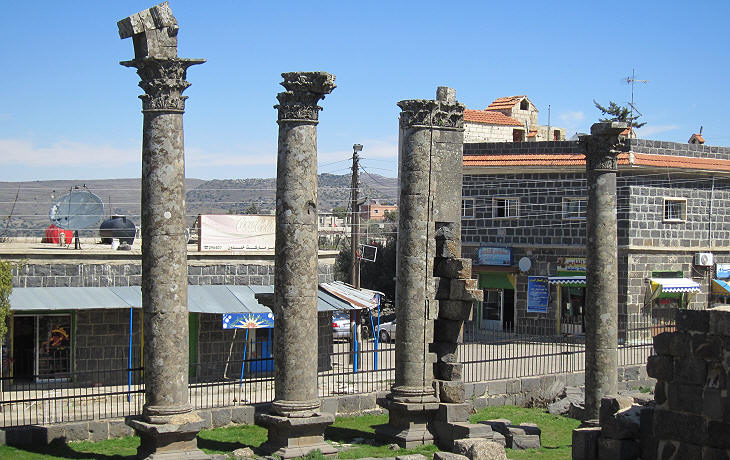 To the west is another vestibule, which was supported by five Corinthian columns, but four of them only are now standing. Burckhardt
The residence of the military commander was preceded by a portico with columns with consoles which supported small statues (similar to the Colonnaded Street of Palmyra); the columns are placed on an east-west direction, so it is likely that they were aligned along the Decumanus Maximus, the main street of Roman towns; the overall layout of Canatha was influenced by a deep ravine so it did not entirely conform to traditional patterns. 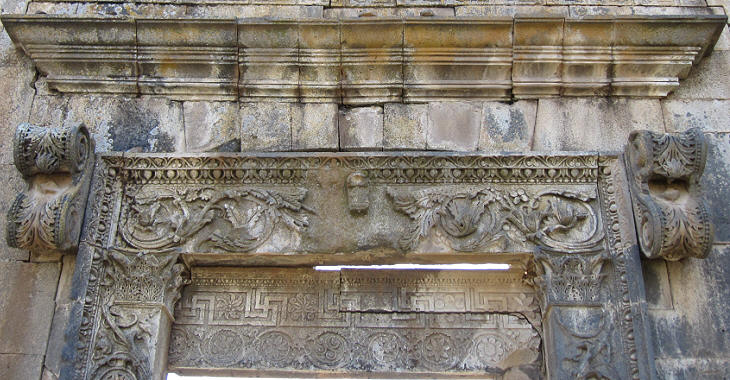 Lintel of the main portal leading to the eastern basilica

While the western basilica has an east-west orientation, the eastern one has a north-south orientation; it was obtained by closing the southern half of a large porticoed courtyard; also in this case the elaborate decoration of the entrances belongs to previous buildings; the lintel of the main portal was partly erased to eliminate an existing relief which was replaced by a small cross. 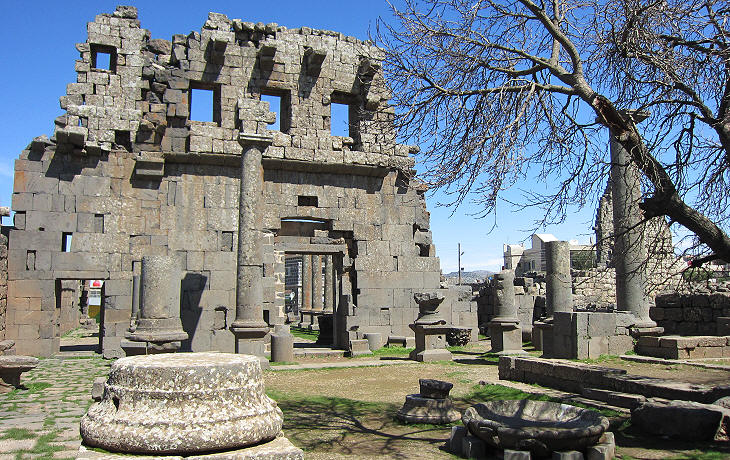 The design of the interior of the basilica was influenced by the pre-existing courtyard and the main nave was surrounded by an ambulatory (covered passage) which was obtained from the porticoes of the courtyard. The baptismal font shown on the ground in the image above was originally in a separate building. 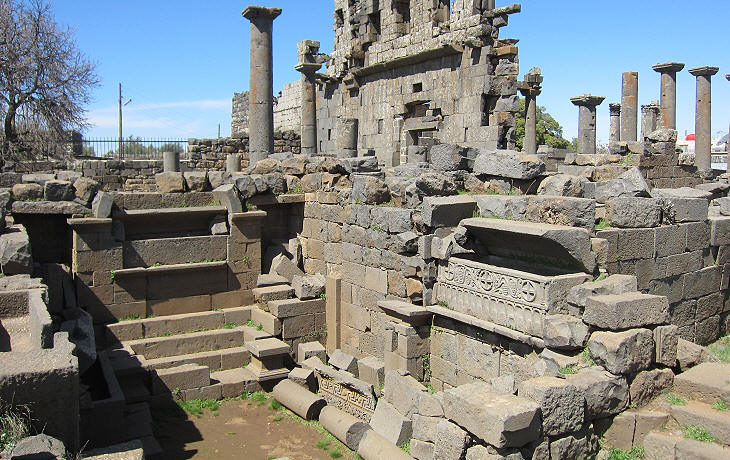 Tomb adjoining the eastern basilica which retains a decorated sarcophagus

The complex includes a tomb where four sarcophagi were found; one of them was re-employed and decorated with crosses; considering that the Romans did not allow people to be buried inside their towns, the presence of this tomb in the centre of Canatha is very unusual; the town was surrounded by walls so its pomerium (sacred boundary) was clearly identified. The decoration of the complex is very varied; the frequent depiction of domesticated animals, leaves and fruit is perhaps a reflection of the florid agriculture upon which the economy of Canatha rested. 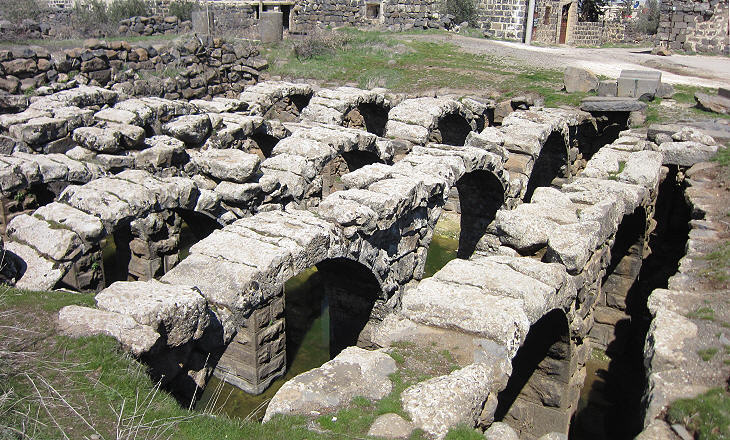 Commodities were stored in a large underground warehouse, the design of which is similar to the cryptoporticus of Bosra, the capital of the Roman province. 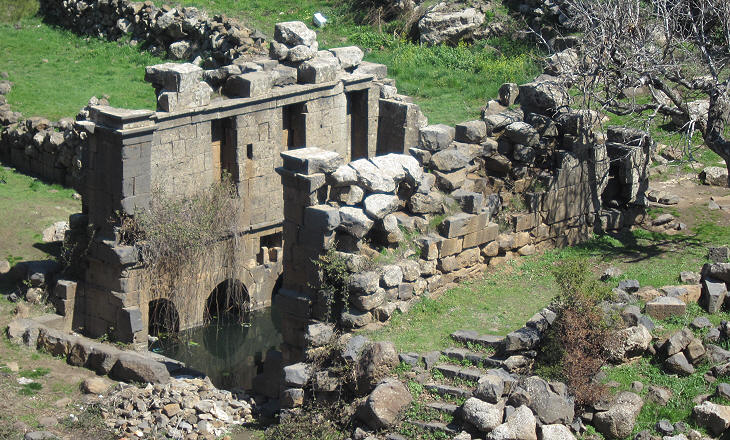 A deep ravine with a small stream surrounded the eastern part of Canatha; the other side of the ravine was a sort of recreational/monumental area where the inhabitants of the town spent their leisure time. 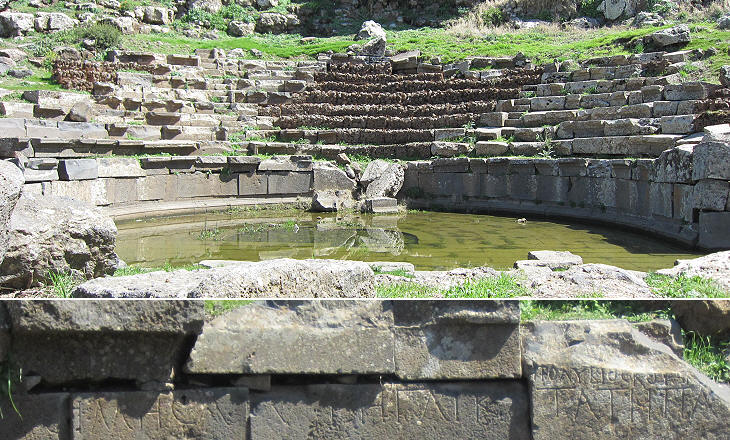 (above) Odeon; (below) part of the inscription on the first seats around the orchestra

This small theatre was partly cut into the rock; only nine rows remain, but it is estimated it could seat an audience of 2,000. It was enlarged at the beginning of the IIIrd century: in the celebratory inscription the building is referred to as an odeon, which means it was used also for public assemblies; having a large theatre added to the prestige of a town and stressed its belonging to the Hellenistic world. 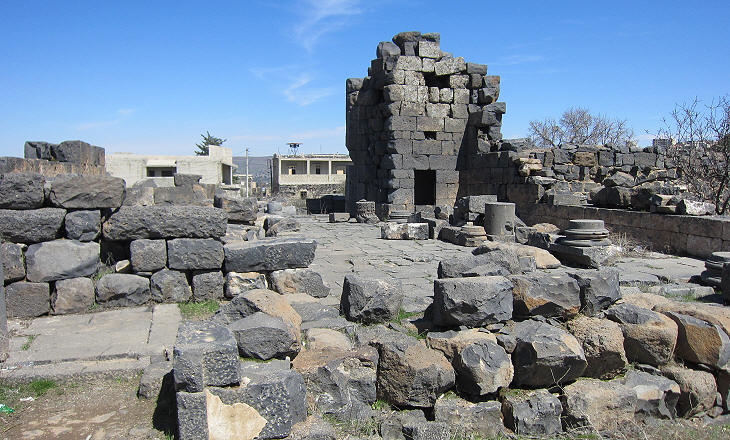 This temple is located near the residence of the military commander in the very centre of the town; it is dedicated to Zeus the Greatest; this epithet of Zeus can be found at other Syrian sites (Doura-Europos); it is thought the first Macedonians who settled in the region used it to affirm that their god was superior to the local deities. The interior of the temple was divided by columns into three naves, similar to a basilica; the entrance was framed by two small towers; the temple, as almost all the monuments of Canatha, was built with large basalt stones. 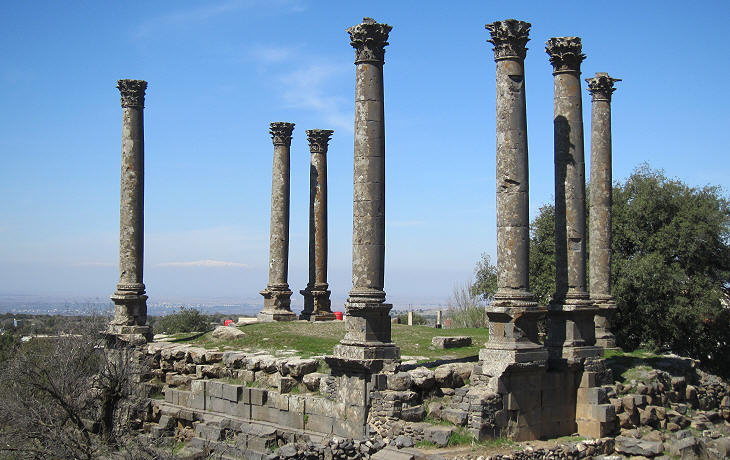 On approaching Kanouat from the side of Soueida, the first object that struck my attention was a number of high columns, upon a terrace, at some distance from the town; they enclosed an oblong square fifteen paces in breadth, by twenty-nine in length. There were originally six columns on one side, and seven on the other, including the corner columns in both numbers; at present six only remain, and the bases of two others. (..) The capitals are elegant, and well finished. Burckhardt
While the design of the Temple to Zeus Megistos departs from that of classic temples, that to Helios (or perhaps Theandrios, a local god) is more traditional and its small cell was surrounded by a colonnaded portico (peripteros). Its Corinthian columns are definitely among the finest ones which can be seen in Syria. Its location commands a grand view over the whole region. 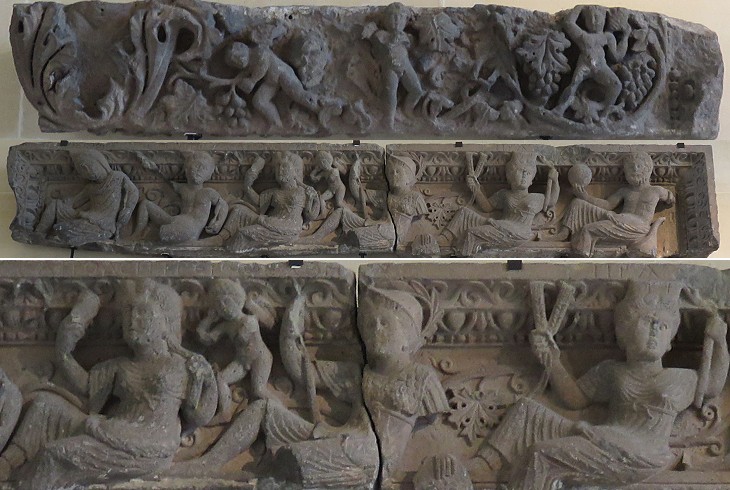 Louvre Museum in Paris: two lintels from Qanawat one of which depicts (again!) the Judgement of Paris, the enlargement shows Aphrodite, Athena and Hera