- Capranica, Rocca and Guadagnolo
(detail of a ceiling at Palazzo Conti at Poli) 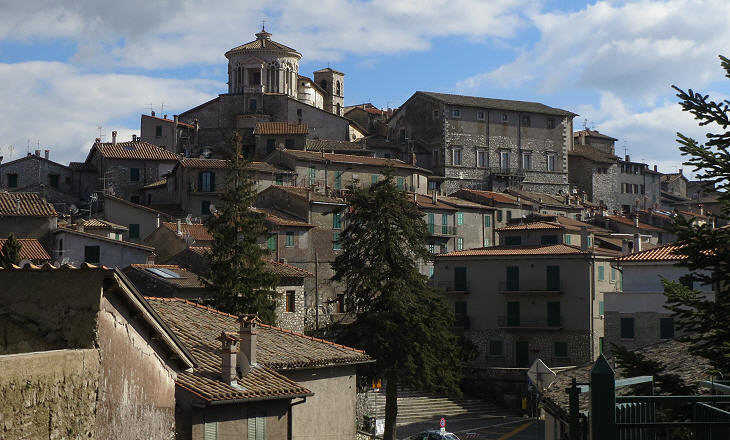 This small town perched on a mountain at almost 1,000 mt/3,000ft was added a reference to Monti Prenestini to distinguish it from another Capranica in northern Latium. When in Italy settlers chose to live at such an altitude which allowed for very limited farming, they did so because of the high level of insecurity of the country in the Early Middle Ages (Vth-Xth century). Capranica was founded in the VIIIth century by refugees from ancient towns which were located at a lower altitude. It. capra means goat and the name of the town is perhaps a reference to its difficult to reach location. 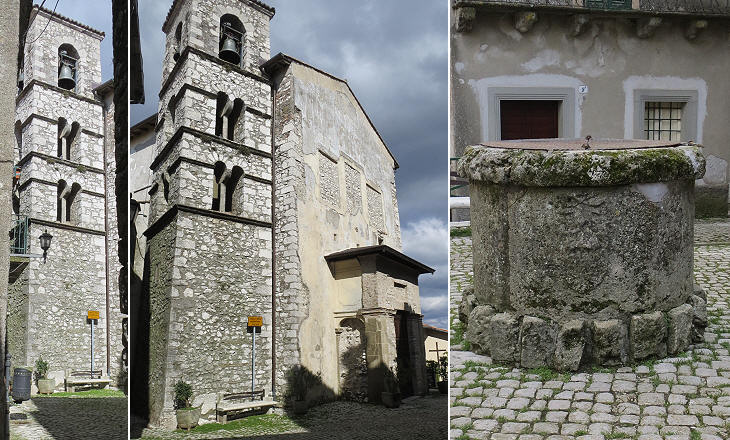 (left/centre) Chiesa della Maddalena; (right) well opposite the church with a worn out coat of arms

Capranica was a fiefdom of the Colonna and Pope Martin V, a member of that family, appointed Domenico Pantagati cardinal in 1426. The new cardinal, who was born at Capranica, acquired great importance in the Papal Curia and he chose to be called by the name of his hometown. He bequeathed a large sum for the foundation of Collegio Capranica which was built by his brother Angelo who was made cardinal in 1460. In 1520 Giuliano Capranica, a relative of the two cardinals, rebuilt the parish church of the small town, but left untouched the XVth century bell tower. The original façade was covered by a new one in the XVIIIth century. 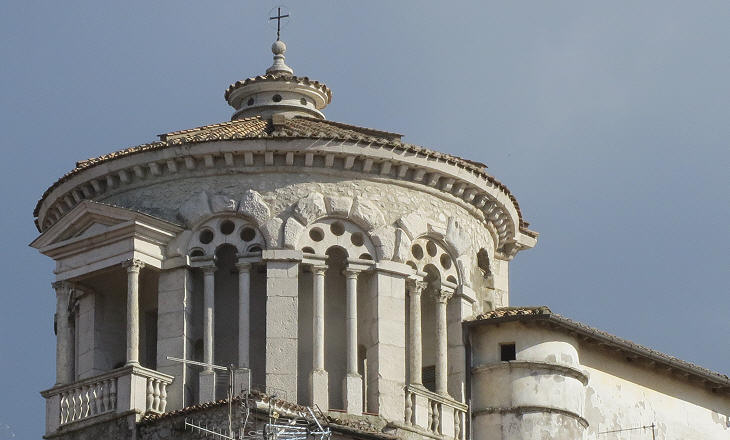 In this connection I wish to say one word about Michael Angelo Buonarotti. I used to worship the mighty genius of Michael Angelo--that man who was great in poetry, painting, sculpture, architecture--great in every thing he undertook. But I do not want Michael Angelo for breakfast--for luncheon--for dinner--for tea--for supper--for between meals. I like a change, occasionally. (..) Here (in Rome) here it is frightful. He designed St. Peter's; he designed the Pope; he designed the Pantheon, the uniform of the Pope's soldiers, the Tiber, the Vatican, the Coliseum, the Capitol, the Tarpeian Rock, the Barberini Palace, St. John Lateran, the Campagna, the Appian Way, the Seven Hills, the Baths of Caracalla, the Claudian Aqueduct, the Cloaca Maxima--the eternal bore designed the Eternal City, and unless all men and books do lie, he painted every thing in it! Dan said the other day to the guide, "Enough, enough, enough! Say no more! Lump the whole thing! say that the Creator made Italy from designs by Michael Angelo!"
Mark Twain - The Innocents Abroad - 1869.
For a long time the fine Renaissance small dome (actually a high drum) of the parish church was attributed to Michelangelo and a street of the town is still named after him, but today it is believed to be the work of a scholar of Donato Bramante, perhaps the same person who designed a nymphaeum at nearby Genazzano. 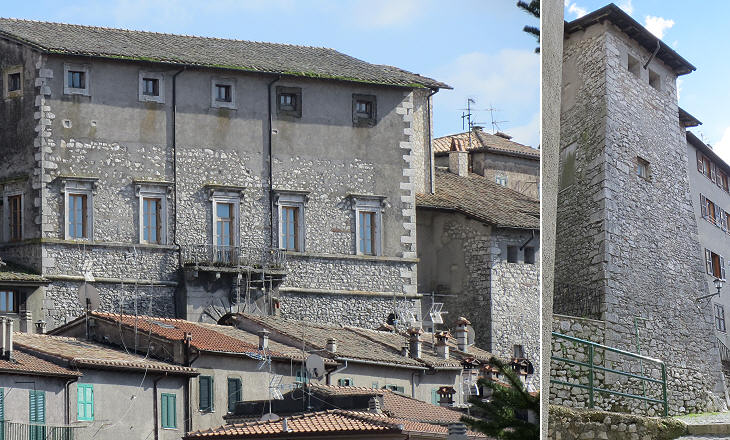 Similar to nearby Palestrina, Capranica was acquired by the Barberini, the family of Pope Urban VIII, in the early XVIIth century. The palace named after them however was built in steps from the XIVth to the XVIth century and at the beginning it must have had a defensive purpose. 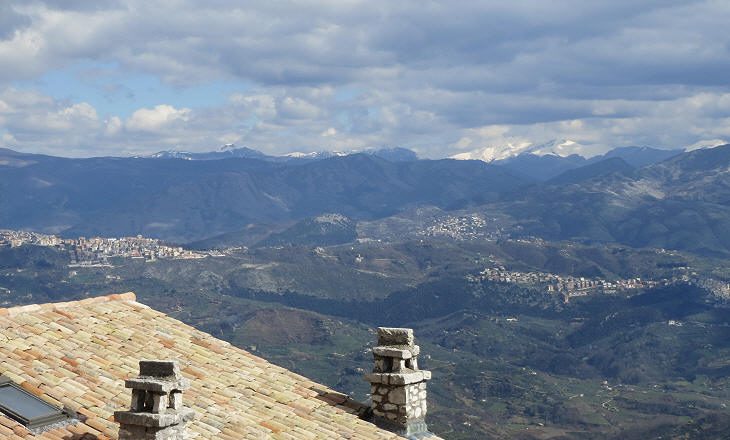 View towards the Apennine Mountains south of Subiaco with the three small towns of (left to right) Bellegra, Roiate and Olevano

Capranica and some other mountain towns which have little or no arable land annexed to them, while they supply their neighbours with shepherds, also furnish their annual quota to the ranks of the banditti.
Lady Maria Callcott (Maria Graham) - Three Months Passed in the Mountains East of Rome: During the Year 1819.
In addition to shepherds and brigands Capranica exported sweet chestnuts, a staple food which replaced cereals in Italian mountainous areas. At the first modern census (1871) Capranica had a population of more than 2,000 inhabitants (most buildings have three or four storeys), but today it has just slightly more than 300 residents, while nearby towns at a lower altitude have experienced a growth of their population. 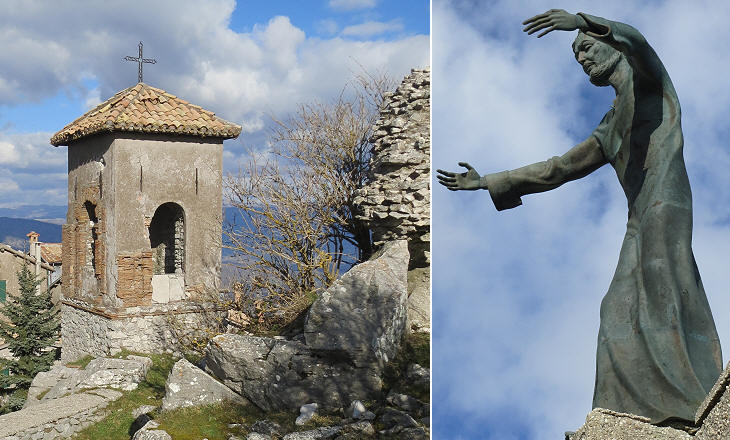 Rupe (rock/cliff) di Guadagnolo is the best known land mark of Monti Prenestini (you can see it in the introduction to this section). Because of its rugged aspect a tradition set there the miraculous vision of St. Eustace, a Roman soldier and Christian martyr, who saw a cross between a stag's antlers. An early Christian shrine was built at the site of the vision. It was restored in the XVIIth century and it became the main source of income for the inhabitants of Guadagnolo. It is known as Santuario della Mentorella.
Historically the small town was part of the fiefdom of Poli and Eustace is the patron saint of that town. The image used as background for this page shows the stag in a painting at Palazzo Conti in Poli. The vision of St. Eustace is painted on the façade of a Roman palace too. 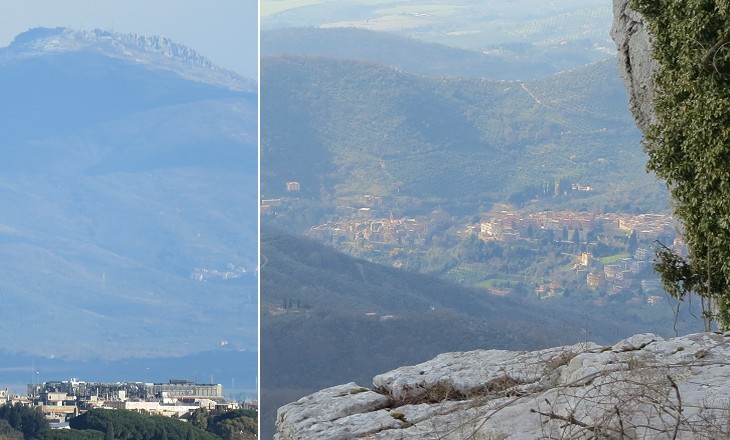 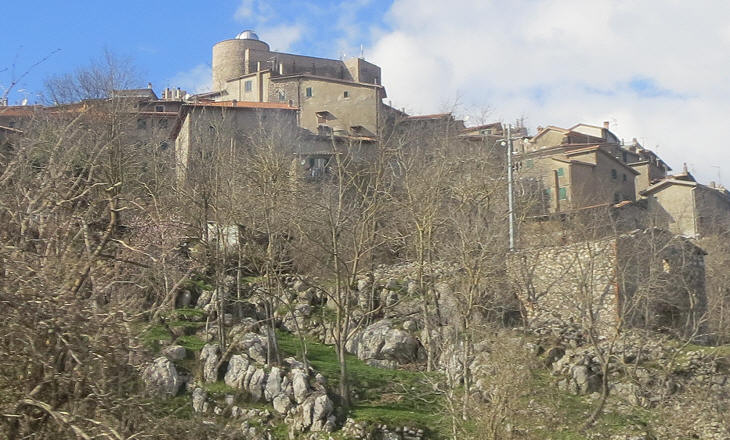 Rocca di Cave (you may wish to see it from Castel S. Pietro)

Cave is a town on the road from Palestrina to Genazzano and Rocca di Cave was a small castle of the Colonna at the top of the mountain behind Cave. It has approximately the same altitude as Capranica and it is easily identifiable for the huge round tower of the castle. Today the tower is utilized as an observatory by Hipparcos, a group of people fond of astronomy.