to See where the Wealthy Live!

Rome has the privilege of hosting two diplomatic corps: ambassadors to Italy and those performing the same task to the Holy See. All nations of some importance have separate embassies and private residences to allow their ambassadors to properly exercise their role. The Italian Republic too has an embassy to the Holy See (it is located at Palazzina di Pio IV near Villa Giulia).
Taxpayers may question the need of maintaining such a double structure in the age of instant communication, but it is a matter of etiquette and in addition Rome is a very sought after location, so reducing the chances for an ambassador to be assigned there is highly unpopular. Great Britain has just one embassy (near Porta Pia) for two ambassadors, but France (Palazzo Farnese - I and Villa Paolina - HS), Spain (Palazzo Borghese - I and Palazzo di Spagna - HS) and many other countries have an embassy for each ambassador. 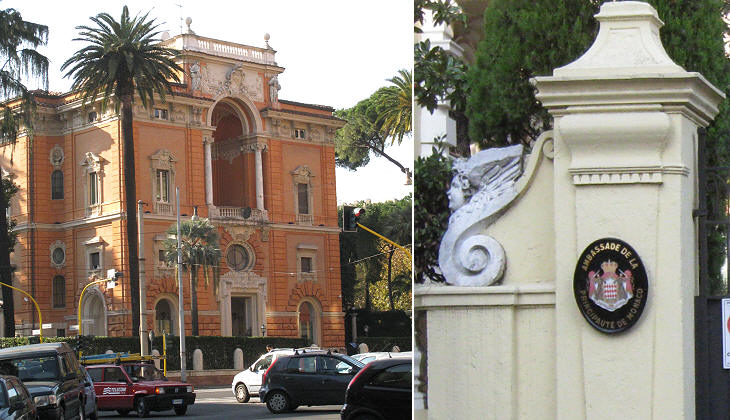 Some embassies are housed in historical palaces in the centre of Rome, but the majority of them are located outside the walls of the city and in particular in the area north of Villa Borghese. To assume to have been charged with finding a suitable building for a new embassy, is a good excuse to wander in a neighbourhood of Rome, where many would like to live. It was developed between 1890 and 1960 and its buildings were designed in very different styles, with just one thing in common: to clearly show that they were very expensive to buy or rent. Villino Berlingieri which was built for a family of rich landowners of Southern Italy has features which can be found in many other buildings: a mixture of neo-Renaissance design and Baroque stuccoes. 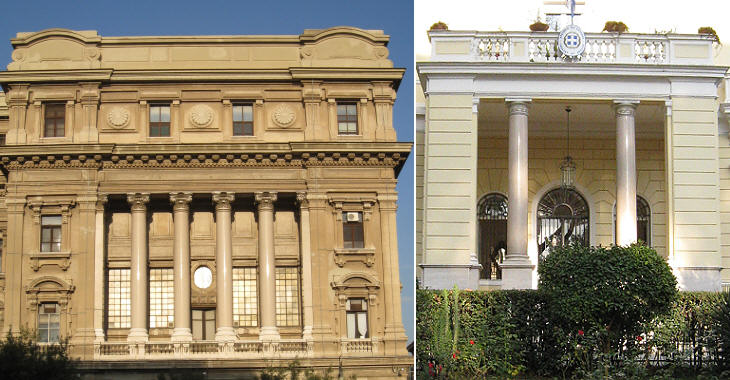 The only large government building in this part of Rome (Istituto Poligrafico dello Stato) reflects the pompous style of Palazzo di Giustizia and yet Garibaldi Burba, its architect, designed Villino Cagiati, a very elegant house in Prati. Note: in the late XIXth century Garibaldi became a popular name for a boy.
Some embassies (including the Saudi Arabian one) are protected by Italian policemen and security guards who do not allow taking pictures. The Greek ambassador does not fear terrorist attacks and his embassy can be photographed without causing reactions. 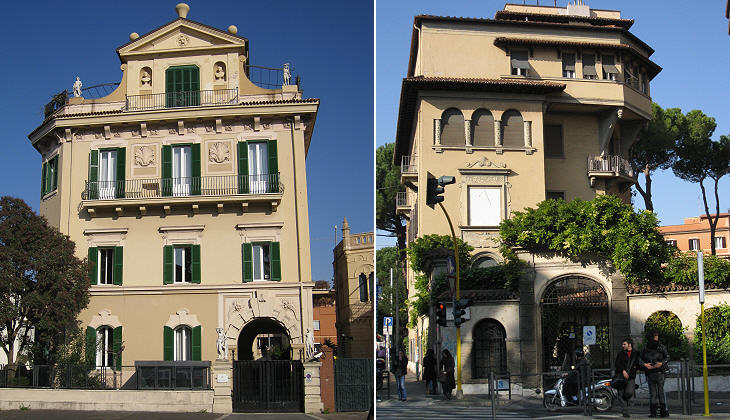 This part of Rome can be reached via the tramway Circle Line. Piazza Galeno, a stop on that line, is known for the extravagant house of sculptor Ettore Ximenes. In the area there are several buildings which could suit the needs of an ambassador with budget constraints. 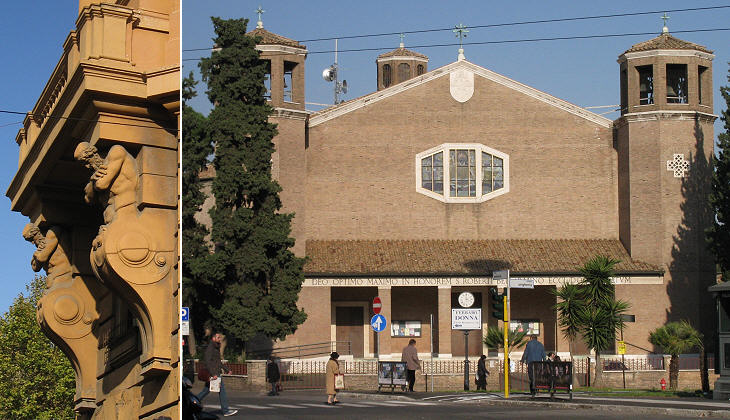 The Circle Line crosses Via Nomentana and it eventually reaches Piazza Ungheria, which marks the beginning of i Parioli, a neighbourhood of Rome where not only buying or renting a house is very expensive, but everything is priced higher than in the rest of the city.
Urbanization started during WWI and was completed in the 1950s. In 1933 the parish church (Arch. Clemente Busiri Vici) of the new neighbourhood was inaugurated: its design was rather neat and in stark contrast with the frills of most of the buildings in its proximity. It was dedicated to St. Roberto Bellarmino who was canonized in 1930. Cardinal Bellarmino, a Jesuit, died in 1621 and his order tried several times to promote his canonization. The process was hindered by the role he had in the Inquisition and in particular in the trial of Giordano Bruno. 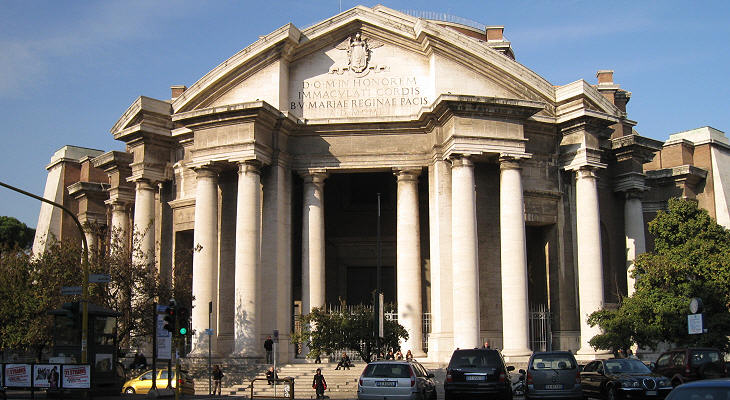 A second church was built at the end of a large avenue which runs across the whole neighbourhood. It was designed by Armando Brasini, an architect who enjoyed the favour of the Fascist regime. His original project included the construction of a gigantic dome which was never built. The size of the church largely exceeds the needs of the ordinary attendance at Sunday Mass. 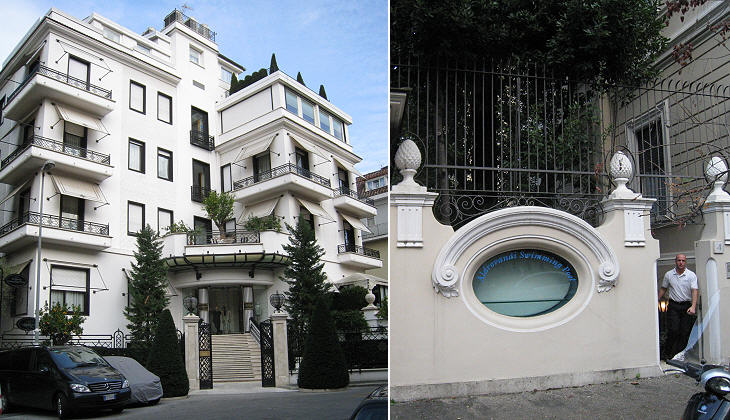 Ambassadors' visiting friends may stay at a 5-stars luxury hotel or in a pretty expensive residence-hotel. Their websites define i Parioli as "one of the most quiet and elegant areas in Rome" and "one of Romes most exclusive areas and an area which makes for a wonderful daytime bicycle excursion" and they both regard Villa Borghese as part of their neighbourhood. 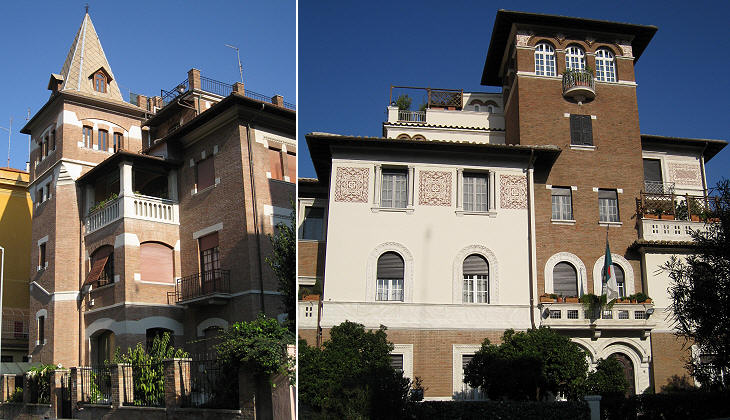 (left) Via B. Eustachio; (right) Algerian Embassy - Via A. Bertoloni

While the prevalent style of the Parioli buildings is based on Renaissance and Baroque patterns, some architects chose a combination of (assumed) medieval elements. 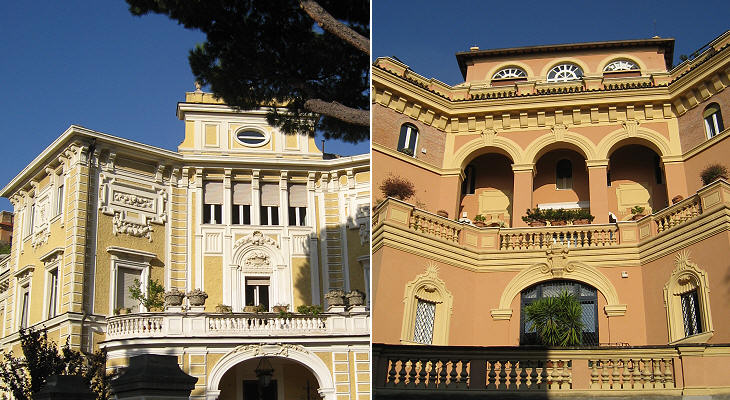 The exact name of the neighbourhood is i Monti Parioli (the Parioli Hills); houses were built on high ground and the town planning did not permit the construction of exceedingly high buildings and established appropriate distance between them. As a result many houses have large terraces on their southern side to make the most of Roman sunshine. 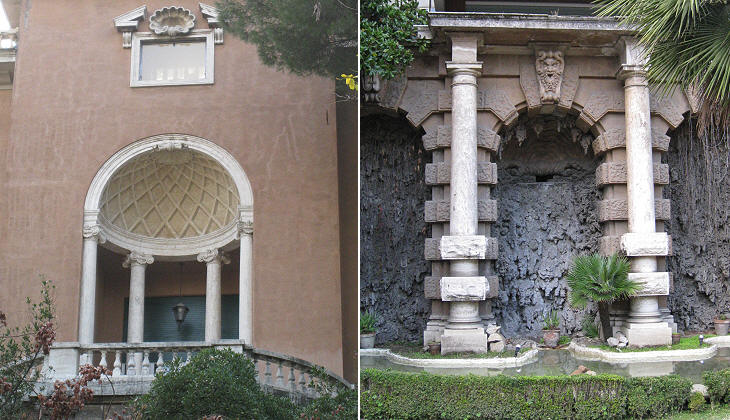 (left) Via Mercati; (right) Via Aldovrandi

The owners of some houses were more pretentious than others and required from their architects the inclusion of elements copied from ancient buildings or Baroque villas. 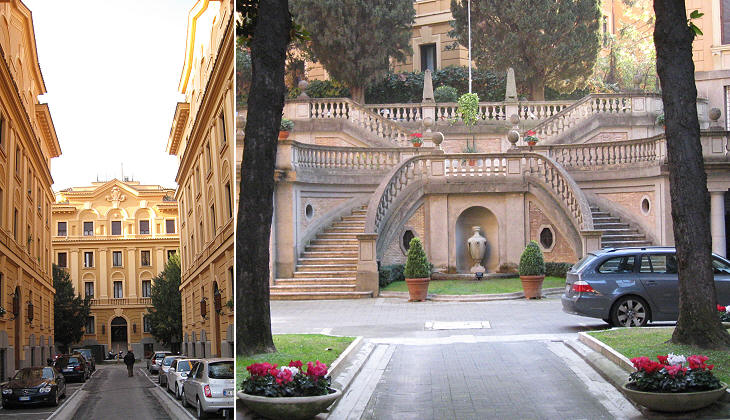 (left) Via delle Tre Madonne; (right) courtyard in Via B.Buozzi

Apartment blocks were designed with the aim of showing some distinction and are highly priced (the image used as background for this page shows a detail of a block in Via delle Tre Madonne).
The sale advertisement shown in the icon of this page was affixed to the gate leading to the courtyard you see above. In November 2008 the asking price for an apartment of 97 sq. metres (116 sq. yards) was 1,150,000 euros (1,437,000 USD). Prospective new ambassadors are alerted!

Other Days of Peace pages:
A Sunny Day in Villa Borghese
At the Flea Market
At the Beach
Voicing Your Views ..... and feeling better
Christmas in Rome
Eating Outdoors
Celebrating the Foundation of Rome
A visit to Roseto di Roma
The procession of La Madonna de Noantri
Running the Marathon
Visiting Multi-ethnic Rome
Finding Solace at the Protestant Cemetery
Attending 2007 July Events
Rome's Sleepless Night
Attending Winter Ceremonies
Jogging at Valle delle Camene
Sailing on the River to see the Bridges of Roma
An October Outing to Marino
A Special Spring Weekend
Watching the Parade
Attending a Funeral ...and enjoying it!
Celebrating Eritrean Michaelmas in Rome
Visiting Rome at Dawn
Visiting Rome in the Moonlight
Visiting Rome on a Hop-on-Hop-off Bus
Baroque Fireworks
Playing in the Snow at the Janiculum
Watching the Pride Parade
Reading Ovid at St. Peter's
Reading Memoirs of Hadrian at Villa Adriana
Visiting the Movie Sets at Cinecittà
Looking up at the Ceilings of the Vatican Palaces
Spending the Last Roman Day at St. John Lateran's Cloister
Reading Seneca at Caracalla's Baths
Walking the Dog at Valle della Caffarella
Keeping up with new discoveries at Museo Ninfeo