close to each other
(Fontaine des Innocents and Fontaine Stravinsky)

None of these modern fountains (although many of them display much taste) are, however, by any means to be compared, in point of elegance, to that which stands in the market of Innocents, and which was erected in the year 1550. Its situation is too confined for so handsome a structure, and I had some difficulty in finding my way to it. It has the following inscription from the pen of M. Santeuil,
"FONTIUM NYMPHIS.
Quos duro cernis simulatos marmore fructus
Hujus Nympha loci credidit esse suos."
Which may be thus translated,
The fruits you see on this cold marble hewn,
This Fountain's Nymph believes to be her own.
Richard Boyle Bernard - A tour through some parts of France, Switzerland, etc. - 1814 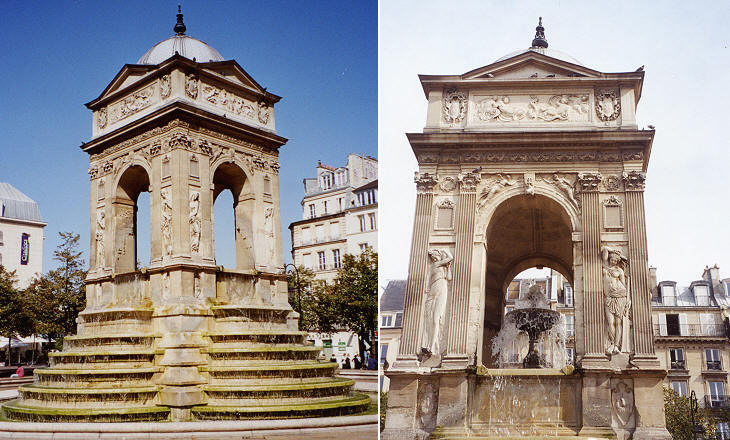 Marché des Innocents, an immense area, formerly the burying-ground of the church of the Innocents, which stood at the eastern end of the present market. The accumulation of human remains during 8 or 9 centuries in this ground had become so serious an evil that, in 1786, they were all transferred to the Catacombs, and, the soil being entirely renewed, a market was erected. The peasants and cultivators in the neighbourhood of Paris arrive here every morning from 12 to 2 with their fruits and vegetables, and from 4 till 9 wholesale dealing is carried on. After that hour they are obliged to leave, and are replaced by retail dealers, who establish themselves under the sheds, which, in four divisions, surround the market, or round the fountain, in the middle. This fountain, constructed by Pierre Lescot in 1551, at the corner of the rue aux Fers, and sculptured by the celebrated Jean Goujon, who was shot during the massacre of St. Bartholomew, while working at one of the figures, was removed to its present situation in 1786. It originally consisted of only three sides; the fourth, or northern side, was added by Pajou at the time of its removal. Four arches, the piers of which are faced with Corinthian pilasters, with pedestals crowned with a sculptured frieze, attic, and, in each centre above the attic, a small pediment, support a small dome; in the midst stands a vase, out of which the water falls in a triple cascade into stone receptacles attached to the basement, and resembling antique baths. Four recumbent lions of rude form are at the corners of the base spouting water, and round the whole is a large square basin, approached by steps. The height is 42 feet. On each of the four sides between the pilasters is the inscription - Fontium Nymphis. and a distich by Santeuil.(..)
It is a valuable monument of the Renaissance des Arts.
Galignani's New Paris Guide - 1853
Galignani's Paris Guide appears so good as to relieve the Editor from the necessity of entering into any description at present of the French Capital.
John Murray - Hand-book for travellers in France - 1843 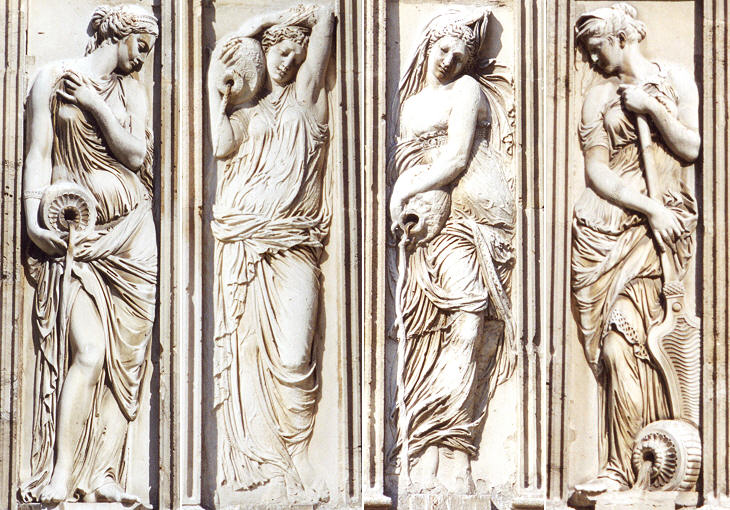 We know very little about Jean Goujon, but it is very likely he travelled through Italy in his youth and what he saw there clearly influenced his work. He worked also at the decoration of a wing of the Louvre. Each side of the fountain is a little Roman arch. Two nymphs on each side are represented in the act of pouring water. Fresh water nymphs were often portrayed in Roman floor mosaics, e.g. in association with Hylas, but they were not depicted while carrying jars; it is likely Goujon was inspired by women of the small towns in the Roman countryside.
In 1786 the graveyard was relocated and the fountain was moved to its current location, south of Les Halles. A fourth side was sculpted by Augustin Pajou in line with the original three sides. Pajou studied in Rome and he is known to have visited Villa Adriana. 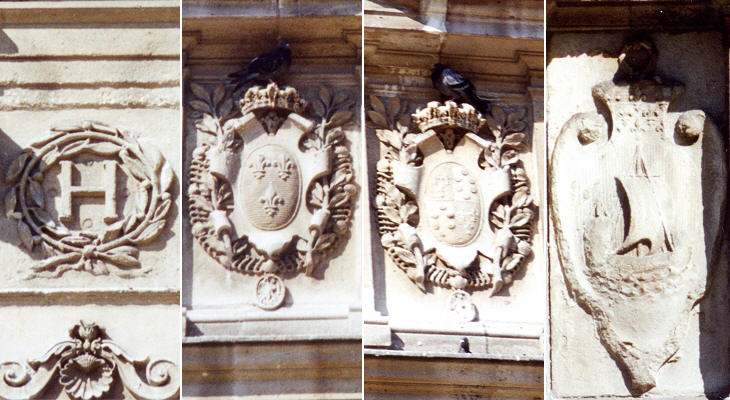 The fountain makes clear reference to King Henry II of France by showing his monogram (one letter is enough for a king) and the royal coat of arms. The artist pays also a tribute to Queen Catherine de' Medici through a coat of arms showing both the fleurs-de-lis of France and the pills of the Medici. Catherine married Henry at the age of 14 and for thirty years after his death in 1559 she influenced the history of France through her three sons (Francis II, Charles IX and Henry III). Finally in the lower part of the fountain, the little ship is the symbol of Paris. 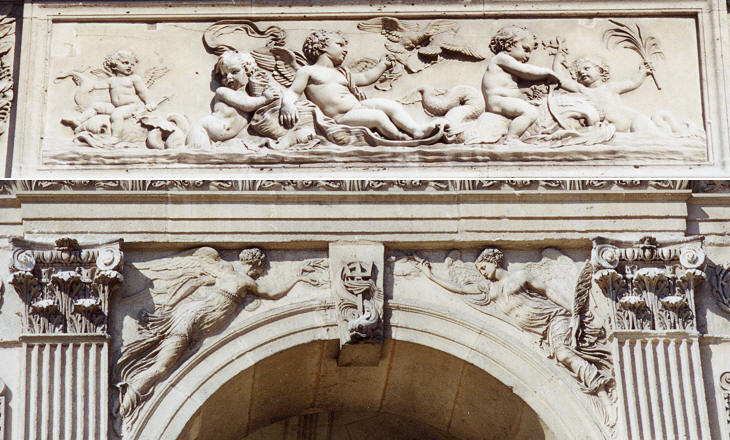 Top of the fountain

The decoration of the arch shows the influence of the Roman triumphal arches where two victories fill the angles, e.g. at Arco di Tito. The top of the fountain shows putti playing water games, a traditional subject preferred by the sophisticated late Renaissance upper classes.

A two minutes' walk east of the Fontaine des Innocents leads to a very different fountain, close to the Centre Pompidou.
Jean Goujon is replaced by Niki de Saint Phalle, who populated the fountain with subjects referring to works by Stravinsky. 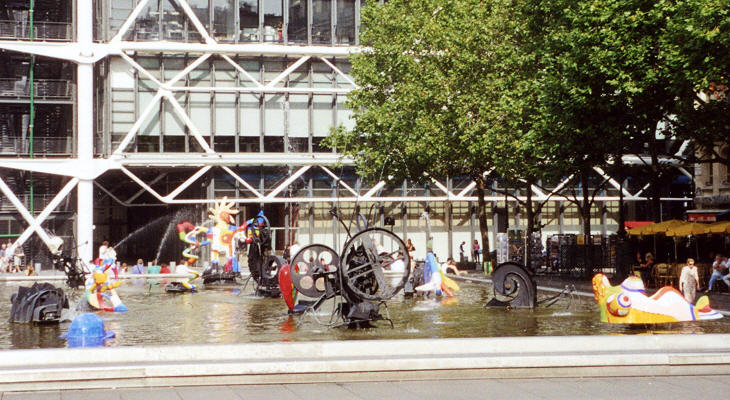 From the very outset of her career in the 1950s, Niki de Saint Phalle (American and French, 1930-2002) defied artistic conventions, creating works that were overtly feminist, performative, collaborative, and monumental. (..) Innovation was key to Saint Phalle's process: from beginning to end, she envisioned new ways of inhabiting the world. (..) Saint Phalle produced fantastical and figurative houses, parks, and playgrounds.
MoMA - from the introduction to the exhibition: Niki de Saint Phalle - Structures for Life - 2021 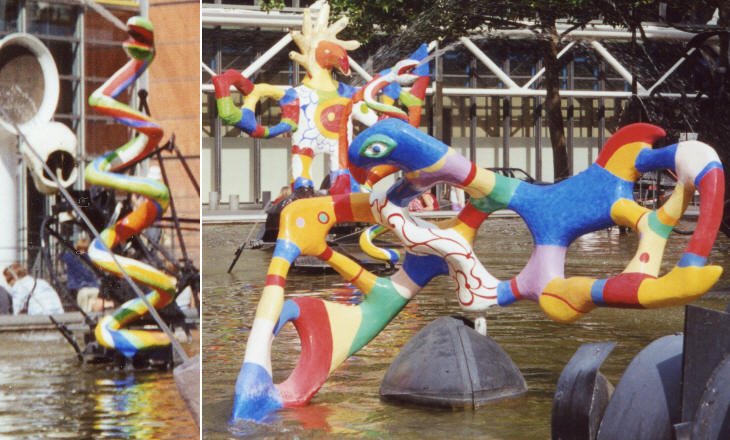 Details of the fountain

Sitting at a sidewalk cafè and watching the artist's amazing creatures continuously revolve is a pleasure of life.