- How to Spend a Peaceful Day in Rome
Watching the

"Ah! Sure some stronger impulse vibrates here,
Which whispers friendship will be doubly dear
To one, who thus for kindred hearts must roam,
And seek abroad, the love denied at home." 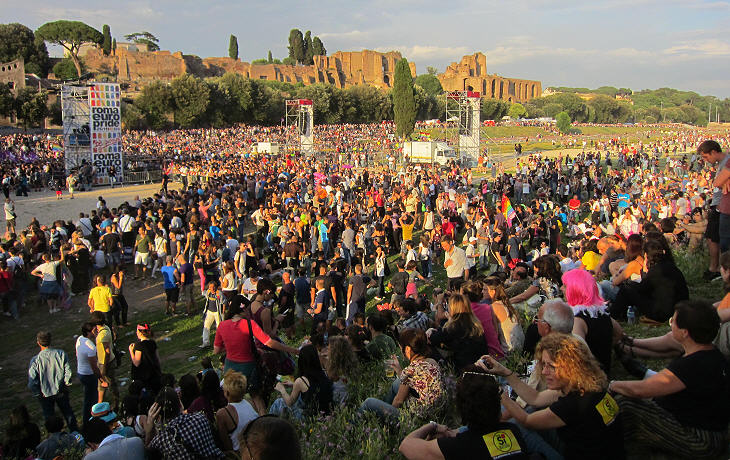 Lord Byron was one of many travellers from Northern Europe who came to Italy and other Mediterranean countries in search of the love they were denied at home. They were drawn by the assumed bisexual heritage of the Ancient World which they thought persisted among the young men of these countries. From the point of view of the law, however, they went out of the frying pan and into the fire because most of the Italian States had severe laws against sodomy in line with the teachings of the Roman Catholic Church.
These provisions were eventually cancelled by the Italian Penal Code which was introduced in 1889 and which is known as Codice Zanardelli from the name of the then Ministry of Justice. Zanardelli justified the decision by saying that the matter was condemnable only from a religious point of view and he supported his view by citing the French Penal Code which similarly dealt with the issue of same-sex sexual acts. 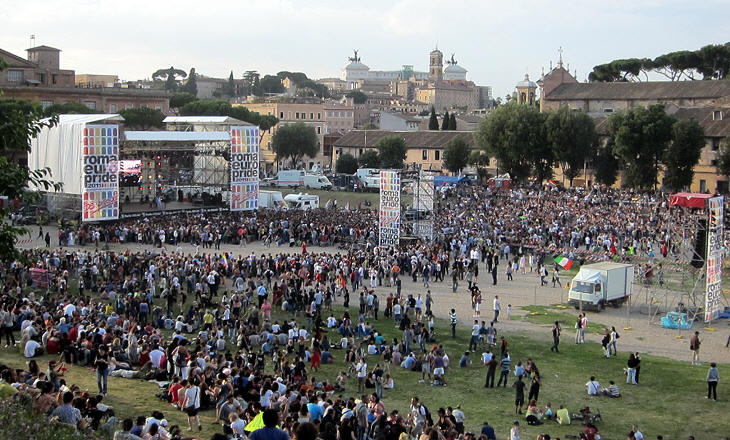 The stage and in the background Monumento a Vittorio Emanuele II and Torre del Campidoglio; S. Anastasia is the church on the right side of the image

In 1930 the Fascist Regime approved a new penal code (Codice Rocco) to strengthen Mussolini's de facto dictatorship by introducing a series of crimes of a political nature such as antinational behaviour and political defeatism which curtailed freedom of speech also from a legal viewpoint.
The new code however maintained Zanardelli's view that same-sex sexual acts were not an offence; the Ministry of Justice thought that a reference to these acts would have undermined the myth of the Italian Fascist Man, who by definition did not indulge in them. 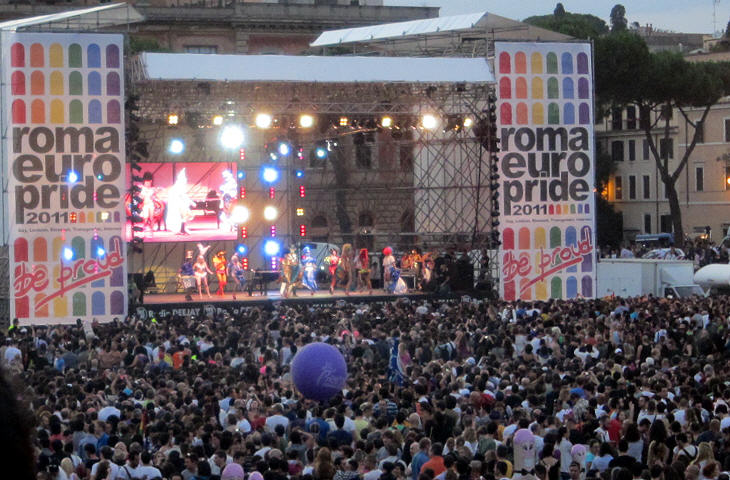 A moment of the show

The 1930 Code however gave ample rights to the police to repress "scandalous" behaviours through administrative measures i.e. without formal prosecutions and trials; male homosexuals could be confined to small towns or placed under a sort of night house arrest on the basis of an order signed by the local chief of the police.
These provisions were applied only to those suspected of having a passive role in a homosexual relation or having an effeminate appearance; their partners were regarded as not having a scandalous behaviour as the exalted virility of Fascism did not make differences on the "object" of Italian men's sex drive. Female homosexuality was totally ignored in line with the anti-feminist stance of the regime which assigned no more than a breeding role to women. Some chose an Ancient Roman attire ...

The powers given to the police were abolished in 1948 because they were not in line with the Constitution of the newly born Italian Republic: Article 13 established that police could act only within the frame of the law and with the endorsement of the judiciary system.
Male homosexuals however remained children of a lesser god; they were not enlisted in the armed forces (Italy had compulsory draft until 2005) on the grounds of their "psychiatric disorder"; this cause of exclusion was recorded into the certificates young job applicants had to provide to their employers and naturally it affected their likelihood of finding a good job or a job at all.
In large cities Buoncostume (Good Behaviour), a special Police squad, patrolled parks or other "suspicious" locations at night; records of people identified during these patrols were kept even though no charges were made against them and this information was made available to employers on request. 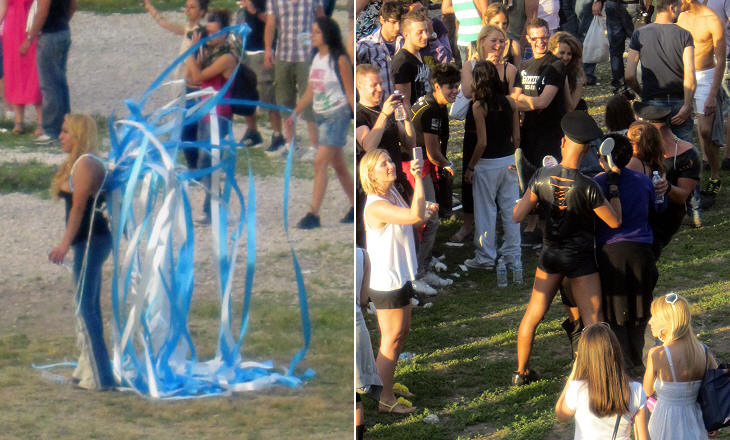 ... others preferred attires more typical of this type of event

The 1969 Stonewall riots which led to the foundation of the Gay Liberation Front in the U.S. had an impact also in Italy. fuori is an Italian adverb meaning out and it was chosen as an acronym by a group of gays and lesbians of Milan, Turin and Rome; F.U.O.R.I! meant Italian Revolutionary Homosexual United Front, but because of the exclamation mark it was also a call to potential supporters to declare their homosexuality.
The new movement soon realized its total isolation from the Italian political scene; the centre-left Government coalition did not want to irritate the Roman Catholic Church by even having a junior undersecretary talking to FUORI!, whereas the opposition was monopolized by the Communist Party which followed a policy of strict compliance with official moral standards. Only the small Radical Party, which had no representation in Parliament, supported FUORI!. 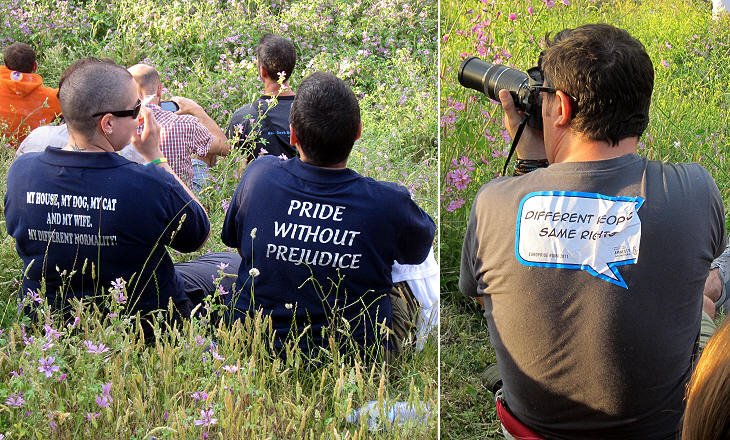 T-shirts with slogans calling for acceptance and equal rights

What politicians were not prepared to accept, Italian society was. In 1970 the approval of a bill allowing divorce was the result of a strong popular request that politicians could no longer ignore; in 1974 a referendum promoted by the Christian Democratic Party to repel this bill flatly failed. The Feminist Movement (and the pill) brought about a new view of sexuality and in 1978 the Parliament eventually approved a bill allowing abortion. In 1981 an article of the Penal Code which mildly sanctioned honour killings was abolished; until then the killing of a wife, daughter or sister by the relative who discovered them in the act of having unlawful sexual intercourse was punished with between three and seven years of imprisonment; it was the so-called Divorzio all'Italiana (Divorce, Italian Style), a 1961 comedy film which won the Academy Award for Best Writing (Story and Screenplay).
As a result of these social changes traditional contempt towards gays subsided and lesbians began to be considered as a group being part of Italian society. 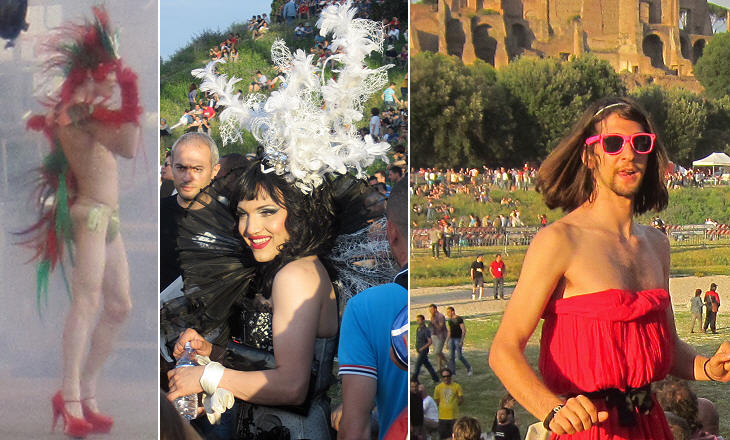 Drag Queens: on the stage (left) and among the public in two versions: very elaborate (centre) and with his sister's clothes (right)

The extraordinary success of many Italian homosexual fashion designers has also influenced society and today suburban young men who wear earrings and have their eyebrows arranged as Hollywood star Joan Crawford used to, do not suspect these aspects of their attire would have been regarded as symptoms of a scandalous behaviour eighty years ago. 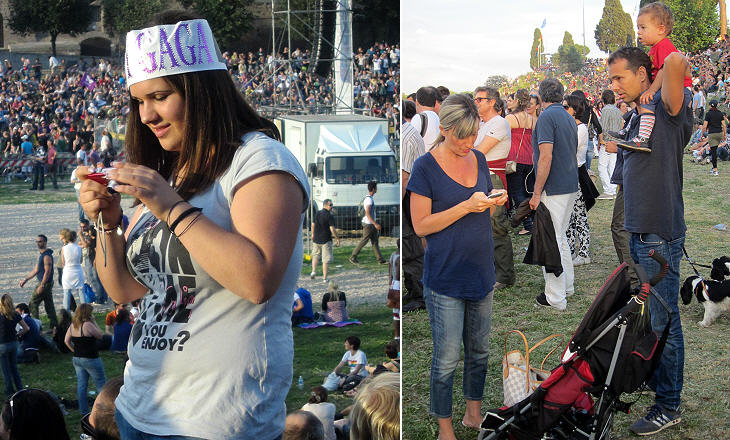 Those who came for Lady Gaga

The 2011 Europride gathering went very smoothly, but Italian society is far from being a haven of tolerance. Several court decisions clearly spelt out that discrimination against homosexuals in the workplace is unlawful, but many Italian blogs refer to gays in derogatory terms and politicians often look for the support of less civilized audiences by using these terms.

The image in the background of this page captures Lady Gaga during her performance.

Other Days of Peace pages:
A Sunny Day in Villa Borghese
At the Flea Market
At the Beach
Voicing Your Views ..... and feeling better
Christmas in Rome
Eating Outdoors
Celebrating the Foundation of Rome
A visit to Roseto di Roma
The procession of La Madonna de Noantri
Running the Marathon
Watching the Parade
Finding Solace at the Protestant Cemetery
Attending 2007 July Events
Rome's Sleepless Night
Attending Winter Ceremonies
Jogging at Valle delle Camene
Sailing on the River to see the Bridges of Roma
An October Outing to Marino
A Special Spring Weekend
Embassy-hunting in Parioli
Attending a Funeral ...and enjoying it!
Celebrating Eritrean Michaelmas in Rome
Visiting Rome at Dawn
Visiting Rome in the Moonlight
Visiting Rome on a Hop-on-Hop-off Bus
Visiting Multi-ethnic Rome
Baroque Fireworks
Playing in the Snow at the Janiculum
Reading Ovid at St. Peter's
Reading Memoirs of Hadrian at Villa Adriana
Visiting the Movie Sets at Cinecittà
Looking up at the Ceilings of the Vatican Palaces
Spending the Last Roman Day at St. John Lateran's Cloister
Reading Seneca at Caracalla's Baths
Walking the Dog at Valle della Caffarella
Keeping up with new discoveries at Museo Ninfeo