- Meteora - Inside the Monasteries
(a view of the monasteries)

You may wish to see an introductory page or see the monasteries from the outside first. 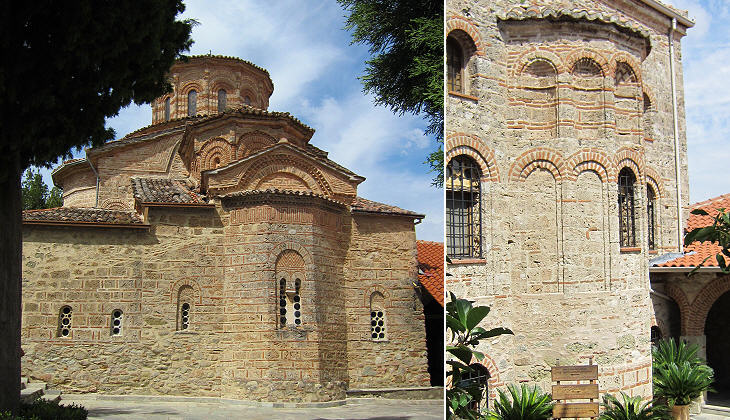 Monastery of Megalo Meteoron: (left) apse of the "katholicon", the major church of the monastery; (right) apse of another church

(November 1809) The largest and most ancient is the Meteora, properly so called. The church, dedicated to the Transfiguration, was built, as an inscribed marble on the outside informs us in the year 1388. The tradition is, that this singular situation was first chosen at a much earlier period by a hermit named Athanasius. (..) The cells of the monks and the apartments destined for strangers are spacious and convenient, but the furniture indicates the decay into which all these establishments are falling. The monastery has been twice deserted, once for sixty years. (..) The house is supplied with water by means of an excellent cistern; and wood is obtained for the trouble of cutting it in the adjacent hills. There are twenty monks in the convent, and as many lay servants.
William Martin Leake - Travels in northern Greece - 1835
The monastery of Megalo Metereon was founded by Athanasius Koinovitis, a monk from Mount Athos (St. Athanasius Meteorites for the Greek Orthodox Church), in 1356; it was enlarged and embellished towards the end of the century by John Uros, a member of the Serbian dynasty ruling Thessaly, who became a monk and later on the leader of the community; the apse of the katholikon is part of the original building, while the rest of it was modified in the XVIth century. 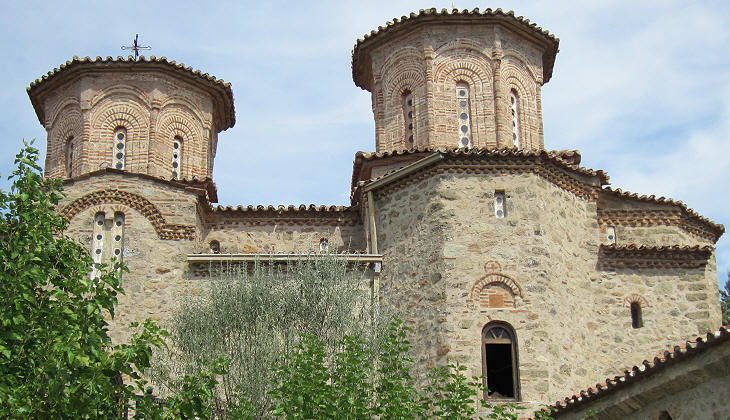 Varlaam monastery was founded in the XVIth century on the site of the lodgings of Varlaam, a hermit; the katholicon (dedicated to All Saints) was completed in 1544; it incorporates a previous chapel; it has a second dome above the narthex. The image used as background for this page is based on paintings inside the katholicon.

Monastery of Agios Stefanos - Dormition of the Theotokos (the Virgin Mary)

The interior of most of the churches was decorated with frescoes, some of which have required a lengthy restoration because of the damage caused by abandonment, WWII and the Greek Civil War which followed; the subjects are those traditional in the Greek Orthodox Church, but which can be seen also in some churches of Rome, e.g. S. Maria in Trastevere. 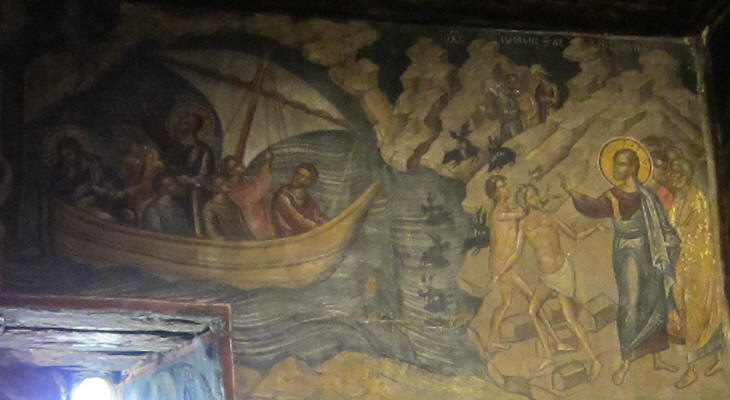 The frescoes inside the only church of Agios Nikolaos Anapafsas were painted by Theophanes Strelitzas, a monk from Candia (today Iraklion), the main town of Crete. Owing to his exposure to Italian art (the island was a Venetian possession) his works soften the rigidity of Byzantine paintings.

Monastery of Agios Nikolaos Anapafsas: scenes of the life of St. Ephrem the Syrian

The ingenuity and skill of Theophanes Strelitzas are particularly evident in the small scenes which surround the main subject, which is treated in a traditional way.

The depiction of the Last Judgement is an integral part of the decoration of an Orthodox church; it is placed so that the faithful see it on their way out of the building, in order to remind them that they will be judged for their actions; the structure of the painting follows a rigid pattern; the artist can show his skill and his ingenuity only in portraying the wicked. You may wish to see some similar paintings at Moni Panagia Mavriotissa at Kastoria. 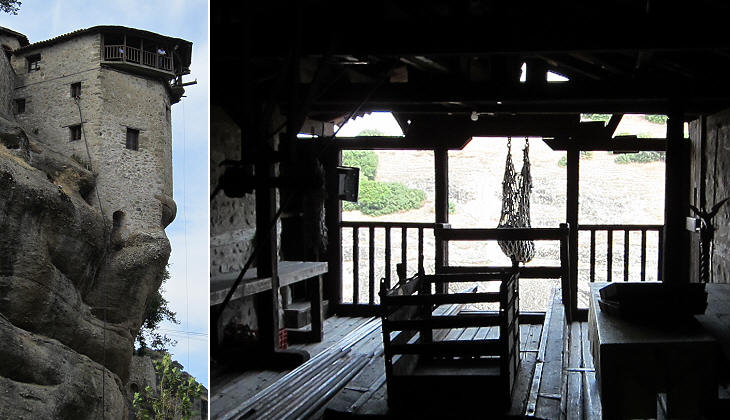 The road to the monastery specifically named the Meteora passes at the foot of the rock on which stands the monastery of Varlaam, and then by a steep zig-zag path through a narrow opening between the rock of Meteora and another to the northward. At the highest point of this pass a ladder, fifty feet in length, fixed to the perpendicular rock, reaches to an opening in the foundations of the lowest buildings of the monastery. By this ladder persons generally pass to and from the monastery with such things as they can easily carry; for larger commodities there is a net hooked to a rope, which is attached to a windlass in a high tower adjoining the church, and standing on the edge of the rock. Another lighter rope in the same place, moving on a pulley and having a hook at the end, serves to raise smaller articles. The perpendicular height by the net is reckoned 200 Greek feet, but appears to me not so much. On our arrival the net was let down, with a small carpet at the bottom, and we ascended in it separately. The net, when suspended to the hook at the end of the rope, and raised from the ground with a weight in it, forms of course a bag which revolves rapidly on being first raised from the ground; this is the only disagreeable part of the operation; the net becomes more steady as the rope becomes shorter, and the inconvenience might easily be prevented by another rope held by a person below; but this is a luxury which has not yet occurred to the holy fathers. Their only rule is to draw up quick and let down slow. The best advice to those who are subject to giddiness is to shut their eyes. (..) The ascent to Varlaam by the net is three or four fathoms longer than at Meteora; and there is a ladder, as at the latter, reaching to the lowest part of the buildings. Leake
Monasteries were accessed by rope ladders, while the old and the sick were hauled up in a net raised by a hoist; as a matter of fact this equipment was mainly used for commodities. 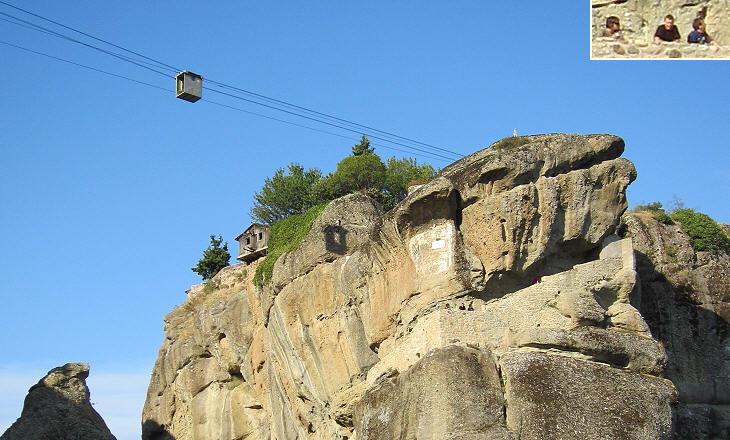 Ways of accessing the monastery of Agia Triada; (inset) people waiting on the steps to the entrance door

Although some modern visitors would enjoy being raised in a net, as a sort of extreme sport, today the monasteries are accessed via steps cut into the rock and commodities arrive via small cable cabins. 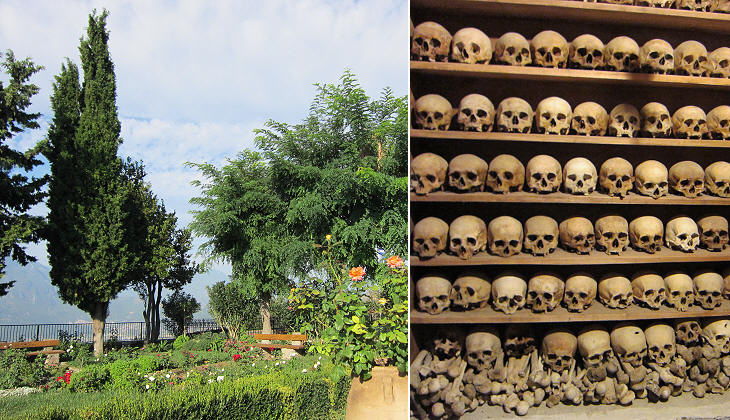 Relaxing and not so relaxing images: (left) garden at Agios Stefanos; (right) ossuary at Megalo Meteoron (see a very famous one in Rome)

Move to page one - introduction or page two: views of the monasteries.