Marathons run in the largest cities of the world have become a very popular event and the Rome Marathon has seen a growing number of participants, with a large foreign attendance, even though it lacks the reputation of the Boston Marathon and the star-power of the New York one. The event takes place on a Sunday in March when a fine day does not mean a hot day yet.
The starting and finishing points are set at Colosseo, which with S. Pietro is no doubt the best known monument of Rome. The marathon is part of the International Association of Athletics Federations yearly planned events. 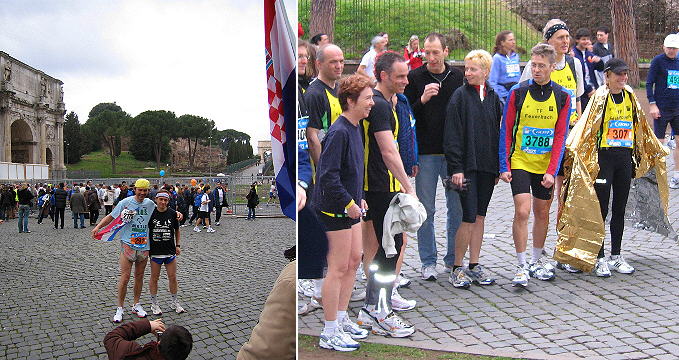 The many participants who have combined the marathon with a Roman holiday smile to the camera to bring home a memento of their attendance at the event. Many hotels offer a special package for those coming to Rome to take part in the event. 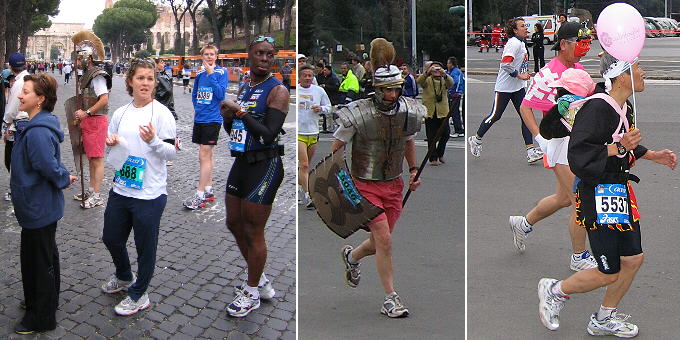 A touch of colour

While a certain number of runners are dedicated to this kind of sport and take very seriously the agonistic side of the event, others are more inclined to have some fun, although their equipment might not be the most suitable for completing the 42 kilometers long run. In some cases the runners are soliciting donations for charities or expressing their support for a noble cause. 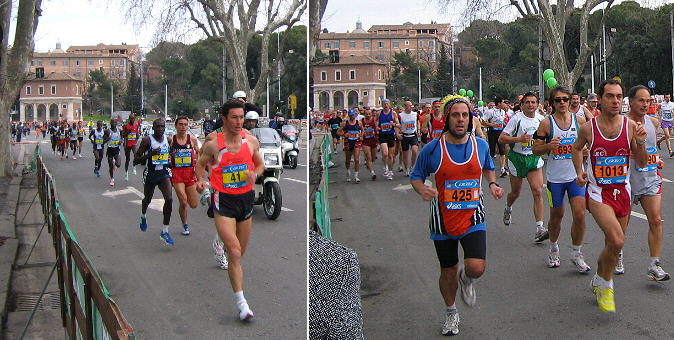 As a matter of fact the start of the race is given with the "professional" athletes in the first lines so that they can immediately compete for victory without having to find their way through the scores whose main objective is just to complete the marathon. In the picture on the left, taken at the first kilometer from the start, the best runners are already in key positions. 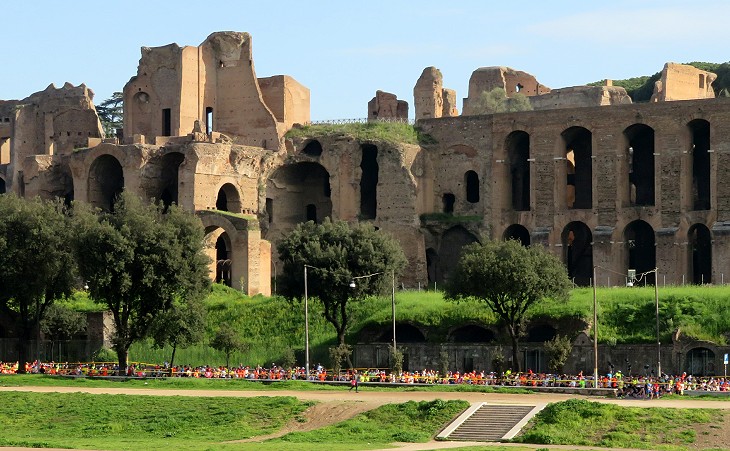 In the first part of the run the participants are still so close one to the other that they form a sort of gigantic snake.
Catherine Fisher was so impressed by the 2000 Rome Marathon which started and finished in Piazza S. Pietro that she wrote a short poem in the Literary Review - Winter 2001.

Men running in narrow streets.
Rain on the cobbles makes them slip,
plasters their vests to their skins.

Running on drains and catacombs,
underground altars, martyrs' bones;
against the clock that throbs in the wrist.

Winners gone too far ahead to see;
miles back, on the Ponte Sisto,
stragglers, hands on hips, white-faced.

All around them the Eternal City,
glimpsed in walls and domes and lost
between breaths, splashes of rain.

Pieta in an alley, briefly crossed.
Outside the walls the bald apostle
deep in the silver crowd at the finishing tape.

The marathon is open also to those who cannot run on their own legs, but do not give up to their bad luck. In 2005 the handybike race was won by Roel Bruijn, a 21 year old Dutch student.

The Fun Run is open to everybody: children are welcome!

The participants to the marathon are in the region of 10,000, but the attendance to the 5 km Fun Race reaches an attendance of some 26,000 runners. 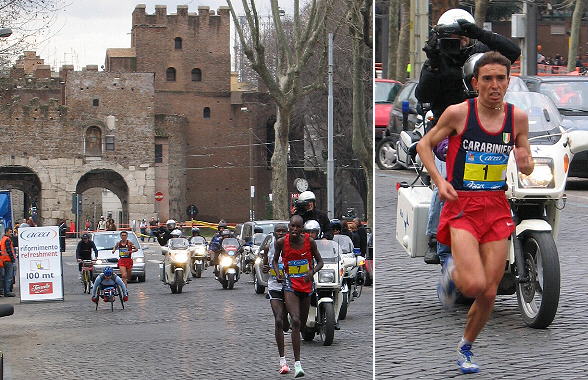 In 2005 the Rome Marathon was held on March 13 and it was won by Marcello De Cecco, a young Carabiniere: at Porta S. Paolo he was still trailing behind Daniel Yego and Philip Manyim, both from Kenya, but on the gentle slope leading to Colosseo he found the strength to take the lead and win the race in 2:08:02. He had finished a good ninth at the 2004 Athens Olympic Games Marathon.
Russian Silviya Skvortsova won the women's Rome Marathon in 2:28:01.

Other Days of Peace pages:
A Sunny Day in Villa Borghese
At the Flea Market
At the Beach
Voicing Your Views ..... and feeling better
Christmas in Rome
Eating Outdoors
Celebrating the Foundation of Rome
A visit to Roseto di Roma
The procession of La Madonna de Noantri
Sailing on the River to see the Bridges of Roma
Visiting Multi-ethnic Rome
Finding Solace at the Protestant Cemetery
Attending 2007 July Events
Rome's Sleepless Night
Attending Winter Ceremonies
Jogging at Valle delle Camene
Visiting Rome at Dawn
An October Outing to Marino
A Special Spring Weekend
Watching the Parade
Attending a Funeral ...and enjoying it!
Embassy-hunting in Parioli
Visiting Rome on a Hop-on-Hop-off Bus
Visiting Rome in the Moonlight
Celebrating Eritrean Michaelmas in Rome
Baroque Fireworks
Playing in the Snow at the Janiculum
Watching the Pride Parade
Reading Ovid at St. Peter's
Reading Memoirs of Hadrian at Villa Adriana
Visiting the Movie Sets at Cinecittà
Looking up at the Ceilings of the Vatican Palaces
Spending the Last Roman Day at St. John Lateran's Cloister
Reading Seneca at Caracalla's Baths
Walking the Dog at Valle della Caffarella
Keeping up with new discoveries at Museo Ninfeo