- Minor Fortifications on Malta
(detail of a statue of St. Catherine of the Wheel in the parish church of Zejtun)

You may wish to see an introductory page with a map first.
The south-western coast is destitute of ports; for nature has defended it with steep and, indeed, inaccessible rocks. The south-eastern is indented with many, which are noble and capacious; that of Marsa Scirocco, at the eastern extremity; the great port of Malta, and that of Marsamuscetto adjoining; then those of St. Paul and Mellecha, Besides these, there are others which admit of small vessels, such as St. Giorgio, St. Giuliano, le Saline, &c. This whole coast is strongly guarded with batteries and numerous watch-towers.
Richard Colt Hoare - A classical tour through Italy in 1790 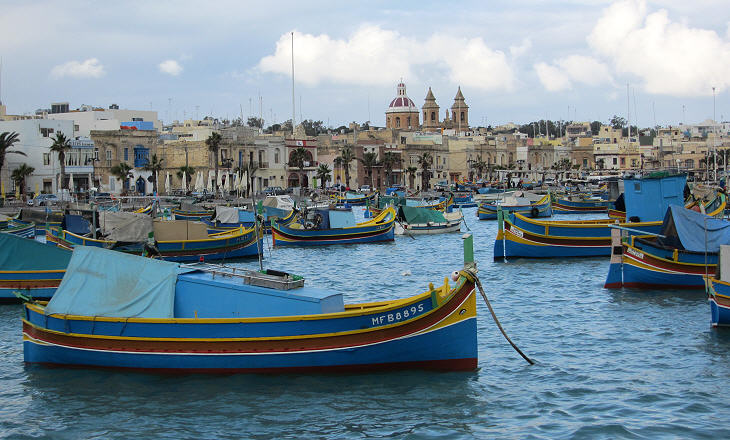 The Great Harbour of Malta where the events of the 1565 Siege took place was not the only natural harbour of the island where a large fleet could moor and land an army. Marsaxlokk before the adoption of Maltese as the official language in 1934 was known as Marsa Scirocco, the port (Arabic: marsa) located at scirocco, in the south-eastern part of the island, because scirocco is the hot wind which blows from that direction, i.e. from Africa. 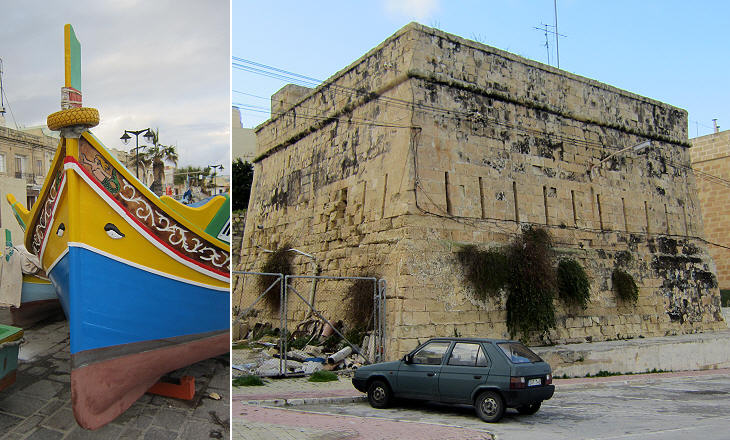 In 1565 the Ottomans landed at Marsaxlokk, which was unprotected by fortifications, and their fleet stayed there for the whole length of the unsuccessful attempt to seize the island. Today the harbour is split into two sections, one of which houses the luzzu, traditional brightly painted fishing boats.

In 1610 Grand Master Alof de Wignacourt decided to protect Marsaxlokk by building a small fortress. It has a square shape with a tower at each corner. On the side towards the sea a separate bastion housed the artillery. In 1614 Fort St. Lucian prevented the Ottomans from landing. 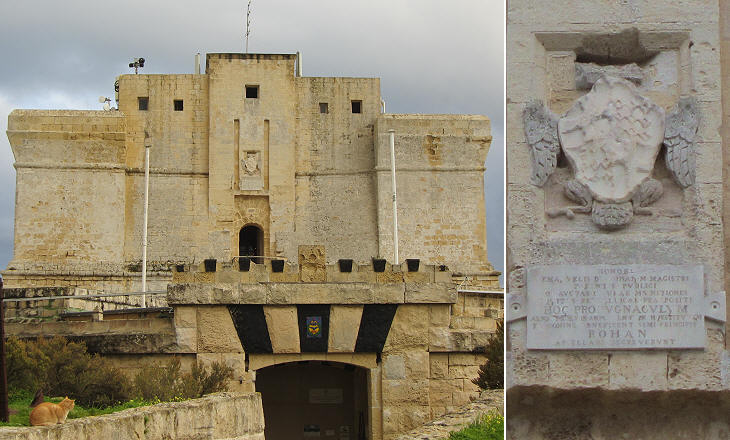 In 1795 Grand Master Rohan made some repairs and improvements to Fort St. Lucian. The garrison of the fort opposed resistance to the French in 1798 and it capitulated only after Grand Master Hompesch surrendered Malta to Napoleon Bonaparte. 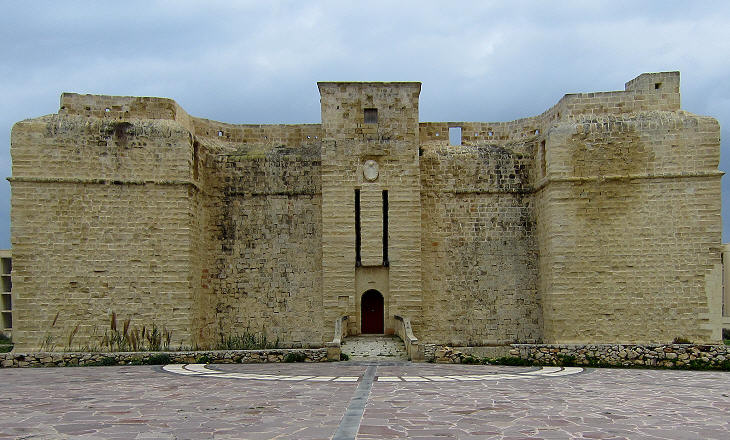 In 1614 the Ottomans landed at Marsascala, a harbour at the south-eastern end of the island, in an unsuccessful attempt to raid the southern part of Malta. In the following year Grand Master Alof de Wignacourt ordered the construction of a fortress identical to Fort St. Lucian. The two fortresses are attributed to Vittorio Cassar, son of Girolamo Cassar who designed the fortifications of Valletta. 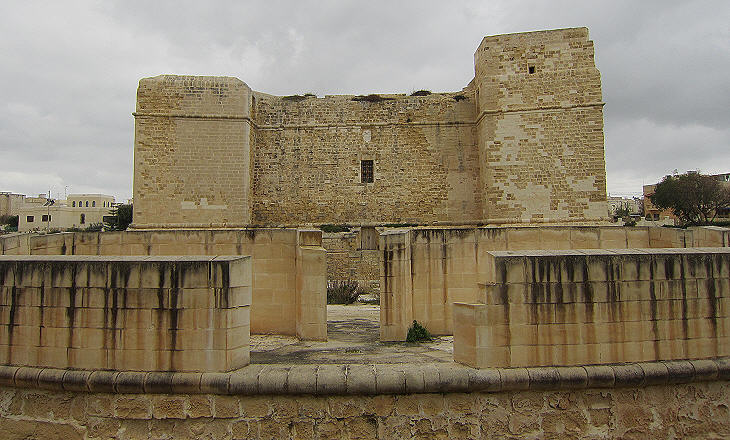 Fort St. Thomas was on the sea front and it was surrounded by a moat. Similar to Fort St. Lucian, a separate bastion housed the artillery. The erased coat of arms belonged to Grand Master Rohan. Today a modern road separates the fort and the bastion from the sea. 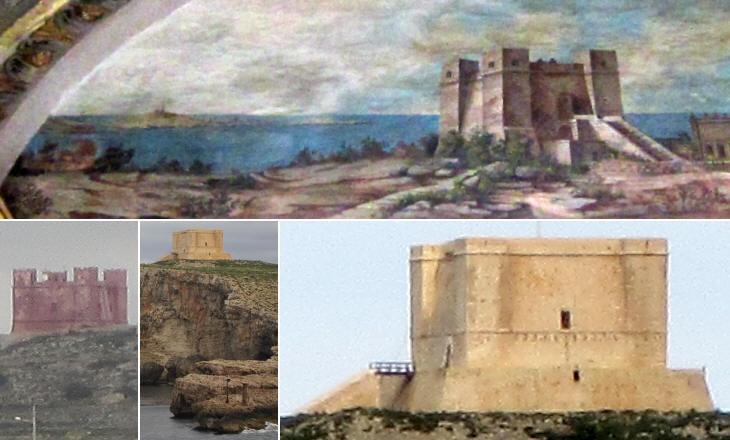 On leaving the great port, I enjoyed a noble prospect of its entrance, and numerous fortifications, which here appear in the most advantageous point of view. I passed by the smaller inlets of St. Giorgio, St. Giuliano, and Le Saline, and the larger ports of St. Mellecha and St. Paolo; and ran close under the Isle of Cumino, of which the steep and rocky shore presents some romantic scenes, worthy the pencil of Salvator Rosa (an Italian painter of the XVIIth century who was highly praised by British Romantics). Colt Hoare
During the XVIth century hundreds of towers were built along the coasts of the Italian peninsula and of Sicily for the early detection of corsair ships (see those at S. Felice Circeo). At that time the Grand Masters were too busy fortifying Valletta, therefore they developed plans for coastal towers to be built at a later date. Grand Master Alof de Wignacourt built St. Mary's Tower on Comino. Later on Grand Master Lascaris built seven coastal towers, of which Fort St. Agatha, at the northern end of Malta, is the largest one.

(above) Fort Manoel in Marsamxett (Marsamuscetto) seen from Valletta; (below) Lazaretto (left) and Fort Manoel (right) seen from Floriana with Sliema in the background

The harbour on the north-side of the city, although they only use it for fishing, and as a place of quarantine, would, in any other part of the world, be considered as inestimable. It is likewise defended by very strong fortifications; and in the center of the bason there is an island on which they have built a castle, and a lazaret.
Patrick Brydone - A Tour to Sicily and Malta in 1770
Beyond the promontory of Valletta, as I have before observed, is the port of Marsamuscetto, the left defences of which are St. Elmo and the Floriana, and the right. Fort Manuel. Near the last is a commodious Lazaretto, where the most rigid quarantine is exacted, on account of the commercial communications of the island with Africa and the Levant, the usual seats of the plague. Colt Hoare
For more than two centuries the Grand Masters were not worried that the Ottomans could make an attempt to enter Marsamxett, but Grand Master Antonio Manoel Vilhena thought differently and in 1723 he commissioned Charles François de Mondion, a French military architect, a state-of-the-art fortress on an islet in the harbour. 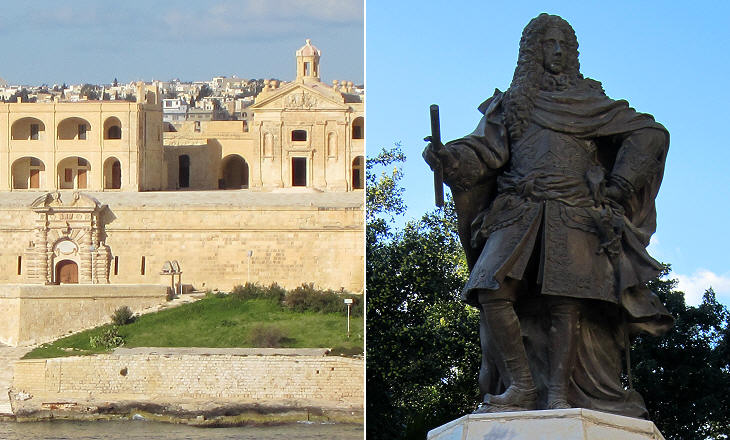 The fortress was named after Vilhena's second name and it included a church dedicated to St. Anthony (Antonio being the first name of the Grand Master). It suffered major damage during WWII. 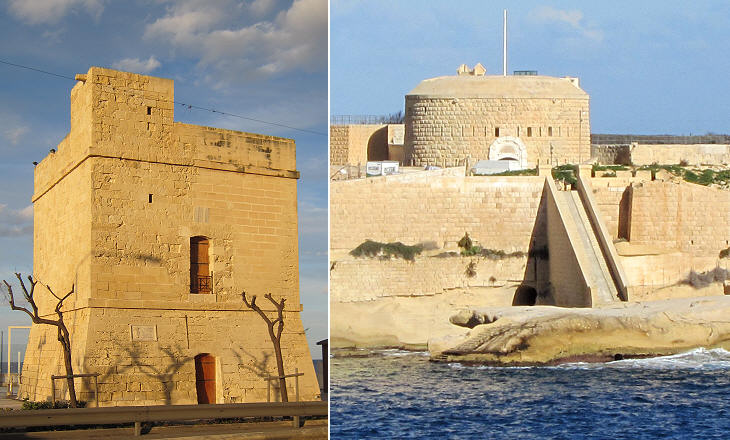 Grand Master Redin built thirteen small coastal towers including St. Julian's Tower at Sliema, today the heart of the hotel district of Malta.
This part of the city is considered as the weakest, the only work to prevent a bombardment from the opposite strand being Fort Manuel. Indeed, it was attacked by the Turks nearly from this spot; and the point of land still bears the name of the celebrated corsair, Dragut. Colt Hoare
Fort Tigne was built in 1792 (after the visit by Colt Hoare) to complement the fortifications protecting Marsamxett. It stands on Dragut Point, the site where in 1565 Dragut placed part of the Ottoman artillery to hit Fort St. Elmo and where he was mortally wounded. 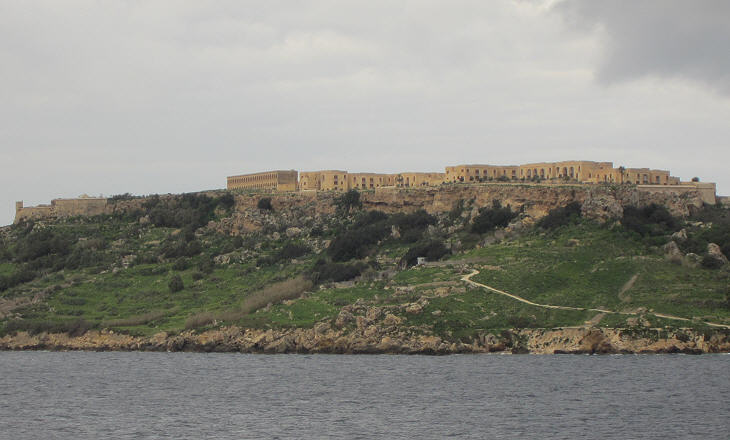 Fort Chambray was built in 1749 by Charles de Chambray, Governor of Gozo, to protect the site where ships from Malta moored and possibly to develop a new town (this explains why the fortress occupies such a large area). Fort Chambray was abandoned for a long time and it eventually housed a hospital for the mentally ill.

The image used as background for this page shows a modern coat of arms of Grand Master Redin at St. Julian's Tower.