- Mdina (Città Vecchia) - page two
(detail of a statue of St. Catherine of the Wheel in the parish church of Zejtun)

You may wish to see an introductory page with a map or page one first.

In 1693 an earthquake destroyed many buildings at Mdina, including the old cathedral. 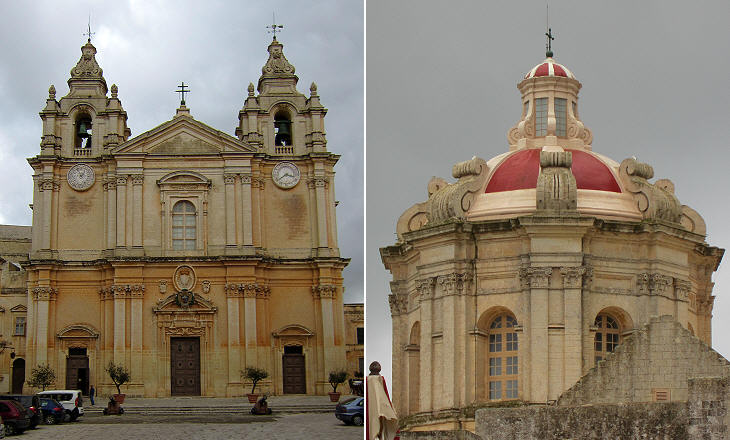 The Cathedral is a handsome building, in good taste. This city was celebrated for the preaching of St. Paul, and distinguished by many of his miracles.
Richard Colt Hoare - A classical tour through Italy in 1790
The Cathedral of Mdina is dedicated to St. Paul whose shipwreck on the island in 60 AD is regarded as the beginning of the evangelization of Malta. Its anniversary on February 10 is a public holiday.
The task of rebuilding the cathedral was entrusted to Lawrence Gafà and it is regarded as the masterpiece of this Maltese architect, whose brother Melchiorre Gafà (Ital. Caffà) was a sculptor of Gian Lorenzo Bernini's inner circle. The dome is located very near the walls of Mdina and it can be seen from almost the whole island. 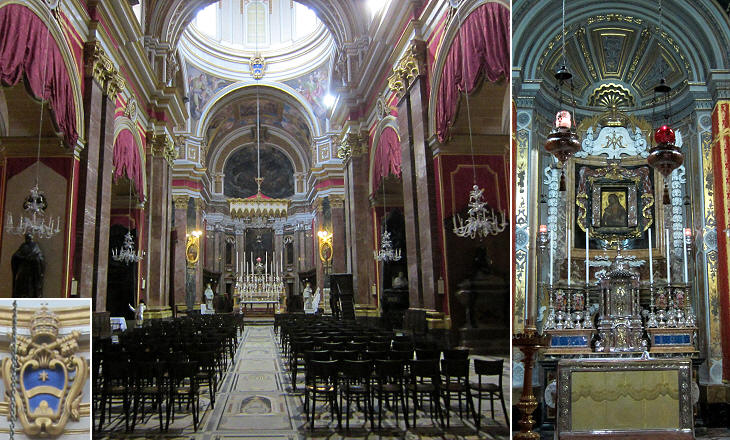 St. Paul's: (left) main nave; (inset) coat of arms of Pope Clement XI, the pontiff at the time the cathedral was consecrated in 1702; (right) altar of the Blessed Sacrament Chapel with an icon brought from Rhodes

The cathedral is a very fine church; and although of an exceeding large size, is at present entirely hung with crimson damask richly laced With gold.
Patrick Brydone - A Tour to Sicily and Malta in 1770
The interior of the cathedral resembles that of a Roman church with a very rich decoration based on coloured marbles, funerary monuments and chapels with sumptuous altars. It can be considered the swansong of Italian artistic influence on Malta. 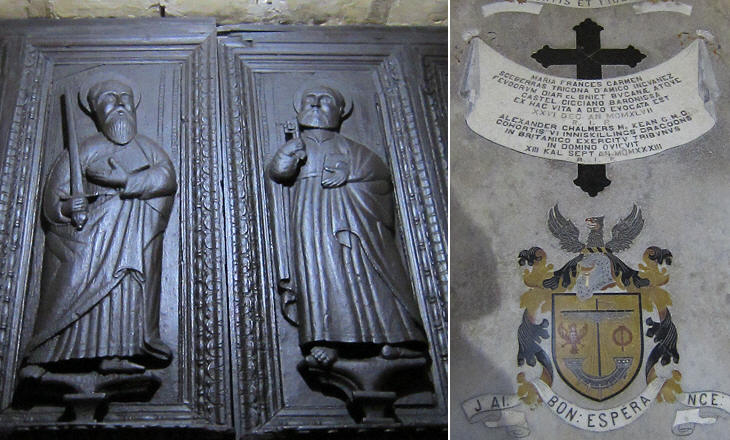 St. Paul's: (left) wooden door of the old cathedral portraying (left) St. Paul and (right) St. Peter; (right) gravestone of a Scottish-Maltese couple: the wife (d. 1948) was a member of a Maltese noble family who was given the fiefdom of Castel Cicciano near Naples by King Philip II; the husband (d. 1933) belonged to an old Scottish family (coat of arms and motto are those of the Mc Kean) and was an officer in the VIth Inniskilling Dragoons, an illustrious cavalry regiment

St. Paul's is magnificent and is finely ornamented with the richest marble. They shew the skeletons of three monks who went into a vault to hide themselves at the time the French came. They shut the door forgetting it could not be opened from the inside and perished. (..) I took another look at St. Paul's; it is built much on the model of St. Paul's in London. The marble in it is exquisite, the gilding in the vaulted ceiling is executed in a superior manner and, though one would not suppose it, is in perfect accordance with the graver part of the architecture.
George Cockburn - A voyage to Cadiz and Gibraltar up the Mediterranean to Sicily and Malta in 1810
Similar to St. John's in Valletta the floor of the cathedral is covered by marble gravestones, not those of the Knights, but those of bishops and members of the local noble families. The practice was not stopped by the British administration and as a matter of fact also some British officers were buried in the church. 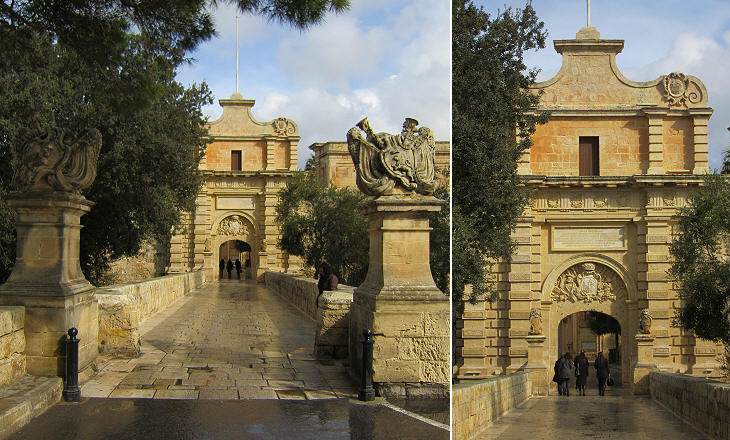 During the XVIth and XVIIth centuries the Grand Masters availed themselves of Italian architects or of Maltese architects who were familiar with Italian art. In the XVIIIth century they entrusted the construction of fortifications and palaces to French architects, in line with general European trends which gave France a leadership in the arts which lasted well into the XXth century.
Grand Master Vilhena promoted the construction of several civilian buildings at Mdina to show the presence of the Order in the religious centre of Malta. He availed himself of Charles François de Mondion, a French military architect who designed buildings and fortifications also at Floriana and Fort Manoel. 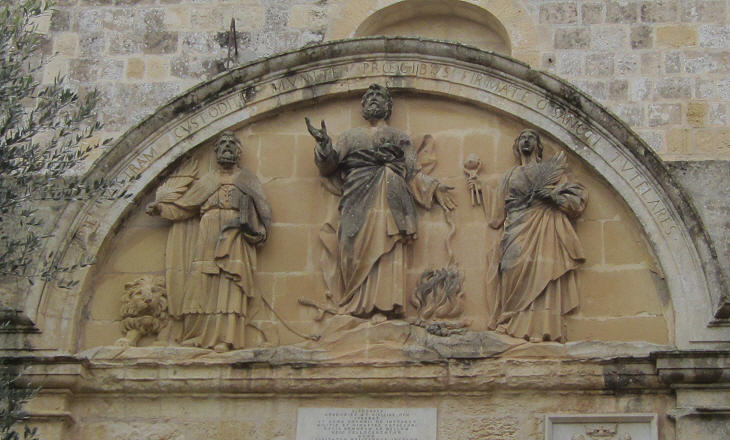 Inner side of the Main Gate: relief portraying the patron saints of Malta: St. Paul shaking a viper into the fire and at his sides St. Publius, his first Maltese follower, and St. Agatha holding one of her breasts

Not far from the city is a miraculous statue of the saint with a viper on his hand; (..) after his shipwreck on this island, he shook the viper off his hand into the fire Without being hurt by it. At which time the Maltese assure us the saint cursed all the venomous animals of the island and banished them for ever. Brydone
The main gate of Mdina was the site of a ceremony which followed the election of a new Grand Master; actually it was the re-enactment of the entrance of Grand Master Philippe Villiers de l'Isle Adam into Mdina in 1530 when he took possession of the town and of the island as vassal of Emperor Charles V, King of Sicily.
Mondion built a large stone bridge leading to the gate which he turned into a triumphal arch to provide the ceremony with a proper setting. The inner side of the gate was decorated with a relief portraying the three patron saints of Malta so that they could attend the triumphal entrance of the new Grand Master. The ceremony was called possessio as that which occurred in Rome after the election of a new pope. 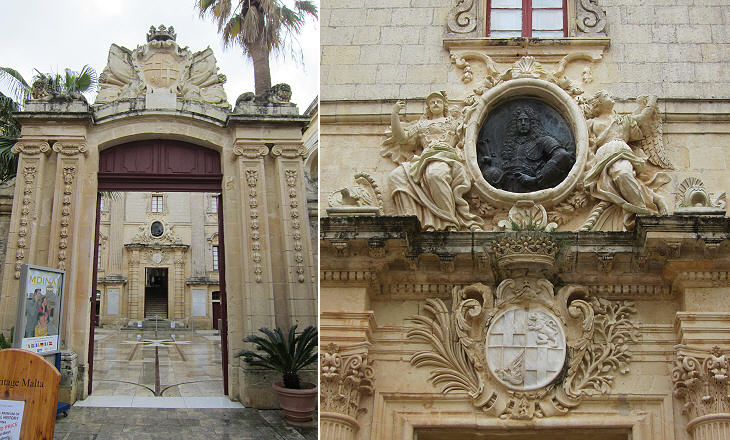 Grand Master Vilhena commissioned a palace near the main gate where he and his successors could watch the ceremonies which followed their entrance into Mdina. In the bronze medallion above the inner portal Vilhena was portrayed wearing the large wig which King Louis XIV of France made so fashionable. Probably it was very uncomfortable to wear such a wig during the long and hot summer of Malta, but Vilhena wanted to convey the message that he was a sovereign on the same standing as the other European kings. As a result of the 1714 Treaty of Utrecht, Spain lost Sicily and the Grand Masters no longer regarded themselves as vassals of the Crown of Sicily. 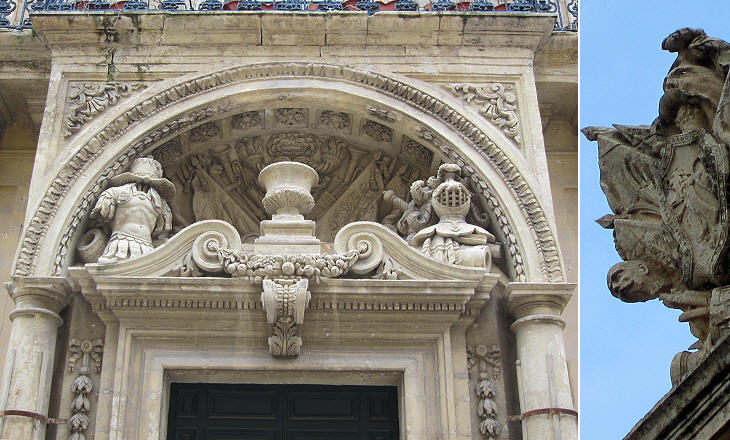 Banca Giuratale: details of its decoration

The Giurati were four Maltese elected magistrates who assisted the Governor of Malta before the island was assigned to the Knights. They retained a mainly honorific role which included taking part in the ceremonies associated with the "coronation" of a new Grand Master. They had residences also at Valletta and Victoria.
Mondion decorated the new building where the giurati met with all sorts of military symbols, for which Grand Master Vilhena had a penchant, probably to make up for the de-facto truce between the Order and the Ottoman Empire which characterized his stay in power. 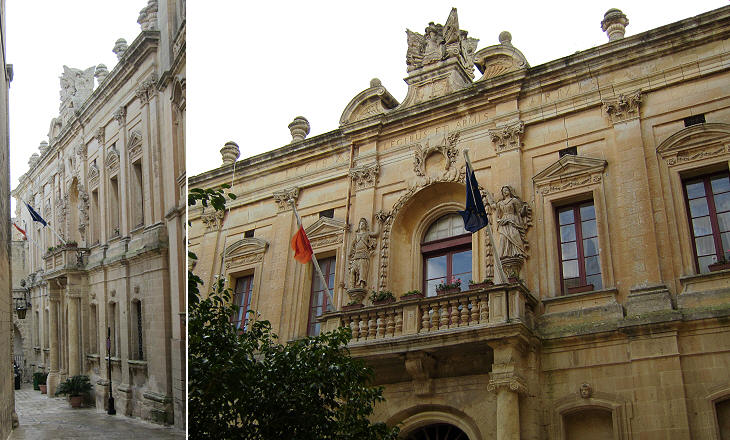 Corte Capitanale (The Courts of Justice)

The jurisdiction of the Grand Masters often conflicted with that of the Bishops of Malta; by building the Courts of Justice in the rear part of his palace at Mdina, Vilhena wanted to emphasize the role of the Grand Masters. The fact however that an underground passage linked Corte Capitanale and its prison with the Bishop's Palace indicates that religious authorities were not without a say in the administration of justice.
The inscription Legibus et Armis (by using laws and arms) is a reference to the foreword of Codex Justiniani, the summary of laws issued by Emperor Justinian, who wanted to restore the Roman Empire to its former greatness by these means. 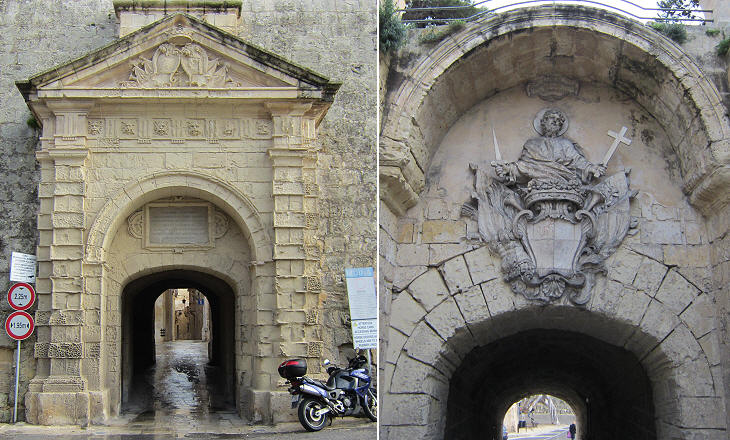 Mdina had a second gate which was redesigned by Mondion too. It is named the Greeks' Gate because some of the inhabitants of Rhodes, who in 1522 followed the Knights when they surrendered the town to the Ottomans, settled in the neighbourhood near the gate. 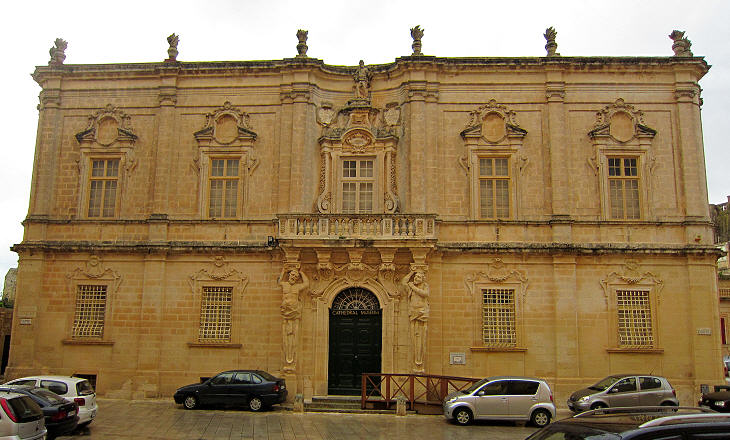 The building bears the coats of arms of Grand Master Vilhena and of Paolo Alpheran de Bussan, Bishop of Malta. In 1723 the previous bishop had relocated the seminary from Mdina to Valletta; the move was unwelcomed by the Knights and in 1733 it was decided to build a new seminary at Mdina, next to the cathedral. The architect is unknown; the use of telamons at the sides of the entrance was unusual in Rome, but very popular elsewhere in Europe, e.g. in Vienna. 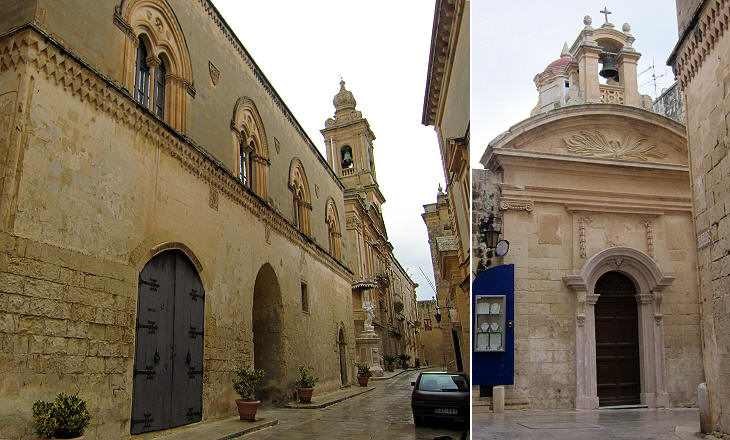 Mdina has retained its character of religious centre of Malta although since 1814 it shares being the residence of the Bishop with Valletta. Churches and chapels are aligned along the main street which retains its old aspect with the exception of the XIXth century upper storey of Saint Sophia Palace, a Norman building. 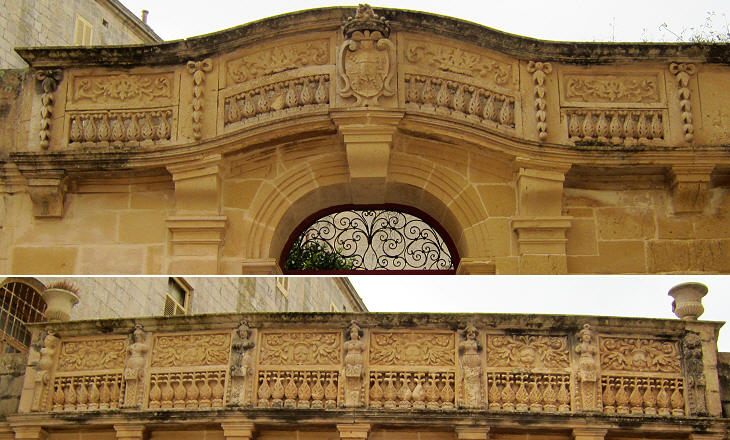 The old noble Maltese families preferred to live in Mdina, rather than at Valletta. The Testaferrata (Ironhead) had the honour of having Fabrizio, a member of the family, appointed cardinal by Pope Pius VII in 1816. He was the first Maltese cardinal, although not the first cardinal residing on Malta, because this was Grand Master Verdale. The Maltese Testaferrata are thought to be a branch of the Capo di Ferro, who are best known for Cardinal Girolamo Capo di Ferro, the founder of Palazzo Spada in Rome. 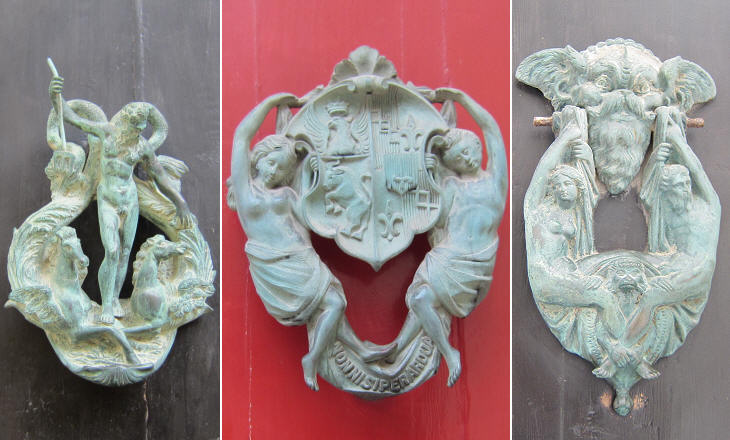 The image used as background for this page shows a portal near Our Lady of Carmel which shows some typical Roman reminders of Death.