- Monuments in the minor towns
(detail of a statue of St. Catherine of the Wheel in the parish church of Zejtun)

The Knights Hospitallers were bound by vows of celibacy, obedience and poverty. On Rhodes they lived in hostels and during their first years on Malta they did the same at Borgo. After the 1565 failed Ottoman attempt to seize the island and the foundation of Valletta the vow of poverty started to be complied with in a rather lax way. 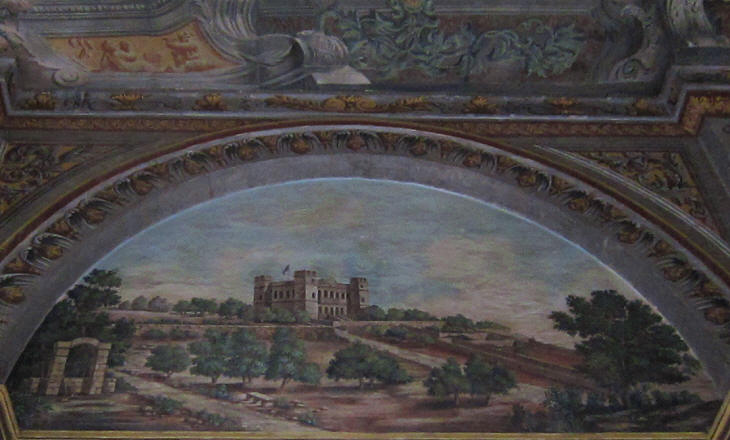 From the old City we rode on to the Great Masters Boschetto where he hath a pretty little Palace in form of a Castle, from the top whereof we had a good prospect of the Island. Heer are a great number of Gardens and Orchards well furnished with all sorts of fruits and flowers, good water-works and a grove of trees; indeed this Palace wants nothing for conveniency or delight.
John Ray - Observations (..) made in a journey through part of (..) Italy in 1663
The aspect of the country is far from being pleasing: the whole island is a great rock of very white free stone, and the soil that covers this rock, in most places, is not more than five or six inches deep. (..) We went to see the Bosquetta (Pretty Wood), where the grand master Verdala has his country palace; by the accounts we had of it at Valetta, we expected to find a large forest well stored with deer and every kind of game, as they talked much to us of the great hunts that were made every year in these woods. - We were not a little surprized to find only a few scattered trees, and about half a dozen deer; but as this is the only thing like a wood in the island, it is esteemed a very great curiosity. The palace is as little worth seeing as the forest.
Patrick Brydone - A Tour to Sicily and Malta in 1770
In 1588 Grand Master Verdale was appointed cardinal by Pope Sixtus V. Verdale was aware that almost all the cardinals who lived in Rome spent the summer in their countryside villas (e.g. Cardinal Ippolito d'Este at Tivoli) and he therefore decided to build a residence in the only woodland of Malta in the south-western part of the island. The building has the aspect of a small fortress because sudden corsair raids could not be ruled out. It still serves its original purpose as the summer residence of the President of the Republic. 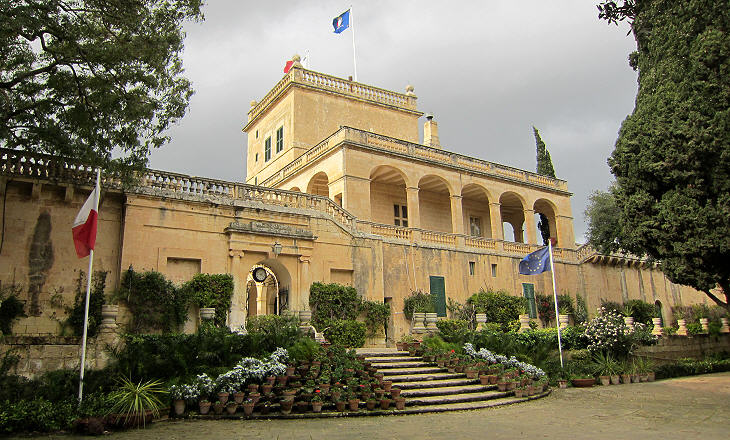 The Grand Master has another villa, named St. Antonio, to which he sometimes retires. The gardens are laid out in the French taste.
Richard Colt Hoare - A classical tour through Italy in 1790
The example of Grand Master Verdale was followed by some of the wealthiest knights including Antoine de Paule. He was elected Grand Master in 1623, but he preferred to enlarge and embellish his villa near Attard which is within easy reach from Valletta, rather than living at Verdala Palace. Today the main building is the usual residence of the President of the Republic, but the gardens are normally open to the public. 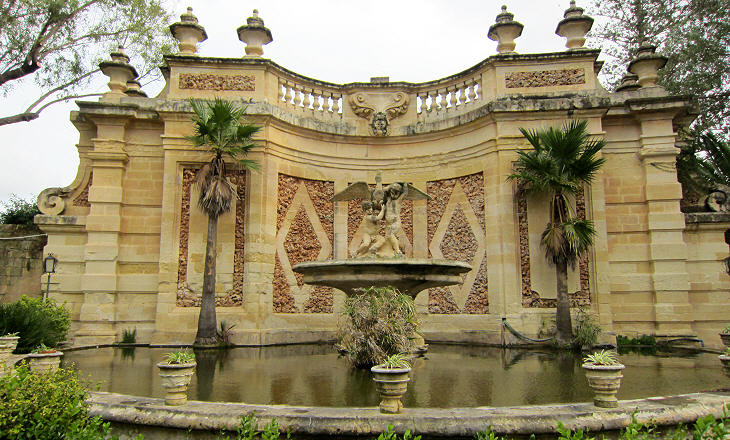 A large garden which was laying out at Sant Antonio, a countryhouse belonging to the Grand Master at half a league from the town, may be considered as one of the most powerful efforts of Maltese industry. It was indeed a wonder in a country where it was so difficult to clothe the ground; any where else it would have been a very indifferent garden, though it abounds with flowers.
Charles Sigisbert Sonnini - Travels in Egypt in 1777.
Villa San Anton was modified by other Grand Masters and by the British Governors, but a section of the gardens retains its original design. The wall behind the fountain is decorated in a way which is typical of Roman villas, such as Villa d'Este at Tivoli or Villa Farnese at Caprarola. 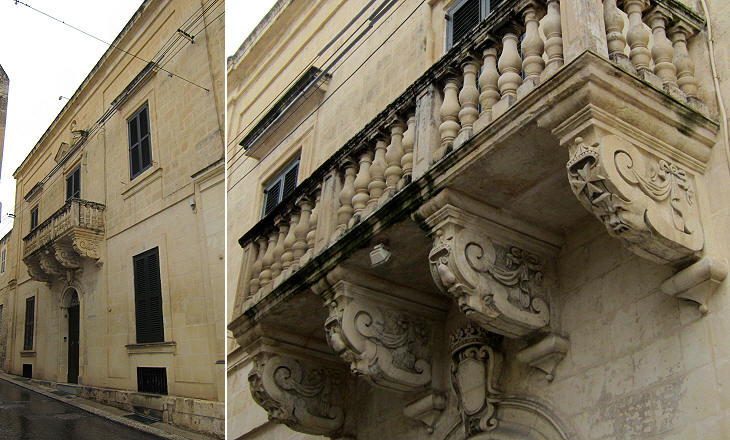 After dinner we went to visit the principal villas of the island. (..) These are nothing great or magnificent; but they are admirably contrived for a hot climate, where, of all things, shade is the most desirable. The orange groves are indeed very fine, and the fruit they bear are superior to any thing I have ever seen, either in Spain or Portugal. Brydone
Not all the countryside residences of the Knights have retained the gardens which surrounded them. Today the small lodge which belonged to Grand Master Perellos at Zejtun is part of a series of rather anonymous houses in the outskirts of the town and only the elaborate balcony with the heraldic symbol of Perellos evokes the former importance of the building. Highly decorated balconies can be seen in many towns of South-Eastern Sicily, e.g. Ragusa and Noto. 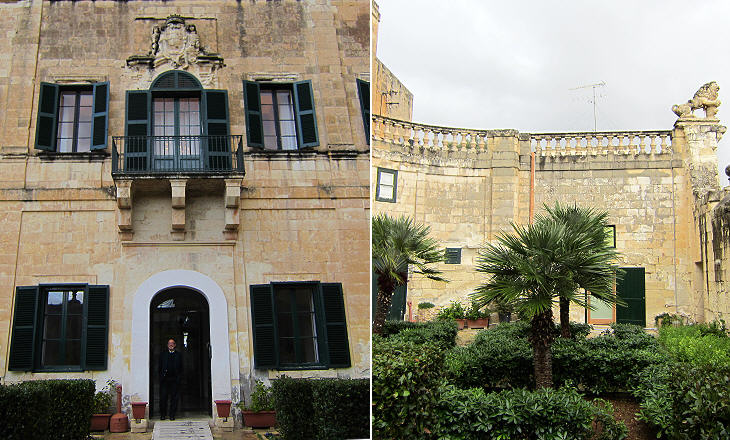 Grand Master Vilhena placed his coats of arms on many monuments at Mdina, Fort Manoel, Valletta and other locations. They were often supported by roaring lions. He did so at his villa at Hamrun too, but the lions played a trick on him, because the building became known as Casa Leoni, rather than as Palazzo Manoel, as Vilhena desired. Today Casa Leoni houses offices of the Ministry of Education. 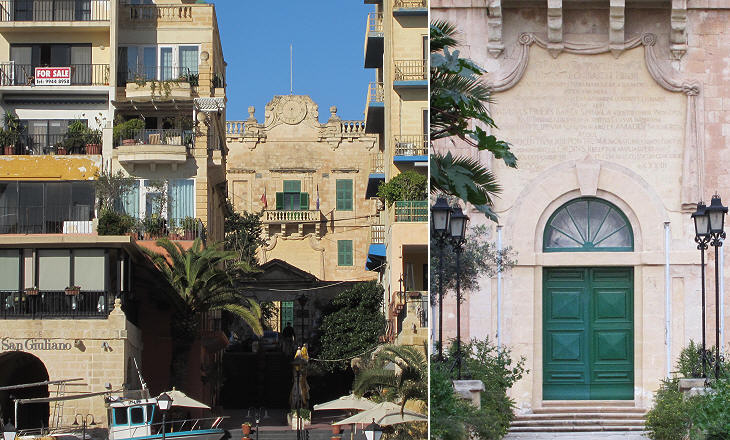 The Spinola are one of the most illustrious families of Genoa. In 1688 Fra Raffaele Spinola built a villa at St. Julian's Bay, today the very heart of Malta's tourist district. Probably because of his Genoese background he chose to build the villa by the sea. Its two small boathouses have been turned into a fish restaurant.
In 1733 a long inscription celebrated a redesign of the building and made reference to various important personages of the early XVIIIth century including Pope Innocent XIII and Victor Amadeus II, Duke of Savoy and King of Sicily in 1713-1720. You may wish to see the fine gravestone of two cardinals of the Spinola family at S. Andrea al Quirinale in Rome. 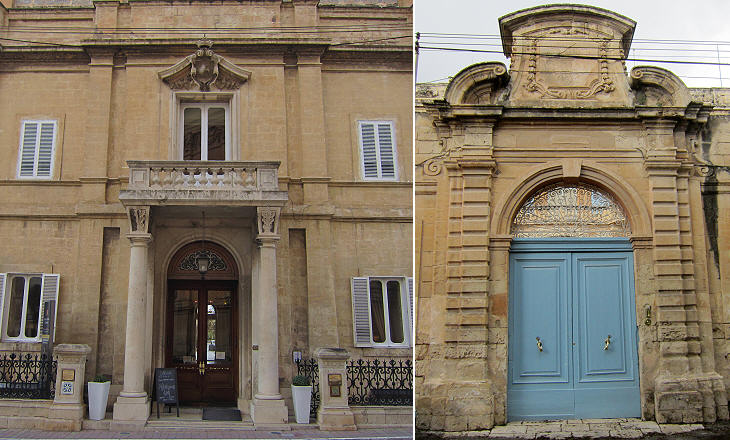 Some of the villas built in the XVIIIth century are still private properties. Usually they were significantly altered during the XIXth century to reflect changes in tastes. Current owners face high maintenance costs which they try to bear by opening the buildings to the public and by housing weddings parties and other events in the gardens. 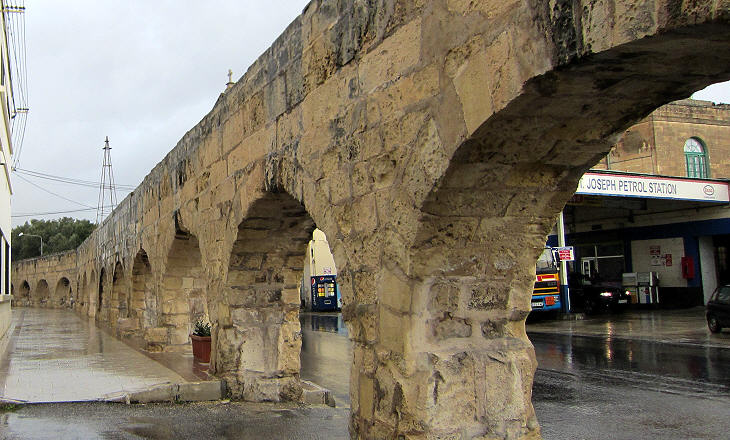 The great source of water that supplies the city of Valetta, takes its rise near to this place; and there is an aqueduct composed of some thousand arches, that conveys it from thence to the city. The whole of this immense work was finished at the private expence of one of the grand masters. Brydone
Grand Master Alof de Wignacourt ordered the construction of an aqueduct to provide Valletta with an ample supply of water. The construction of the aqueduct was supervised by Bontadino de' Bontadini, an architect from Bologna. His appointment was likely suggested to Wignacourt by Evangelista Carbonesi, Inquisitor of Malta, who was from Bologna too.
Sections of the aqueduct can be seen near Casa Leoni along one of the busiest roads of Malta. You may wish to see some of the fountains which were built at Floriana to distribute the water. 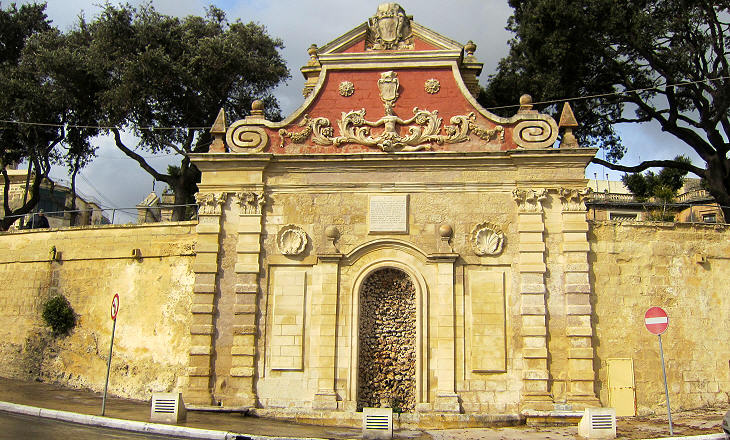 Grand Master Vilhena greatly embellished Mdina with various monuments designed by Charles de Mondion, including an imposing fountain outside the walls of the town in the territory of the parish church of Rabat. The inscription begins with a Latin quotation from Isaiah (55) Omnes sitientes venite ad aquas (All you that thirst come to the waters). 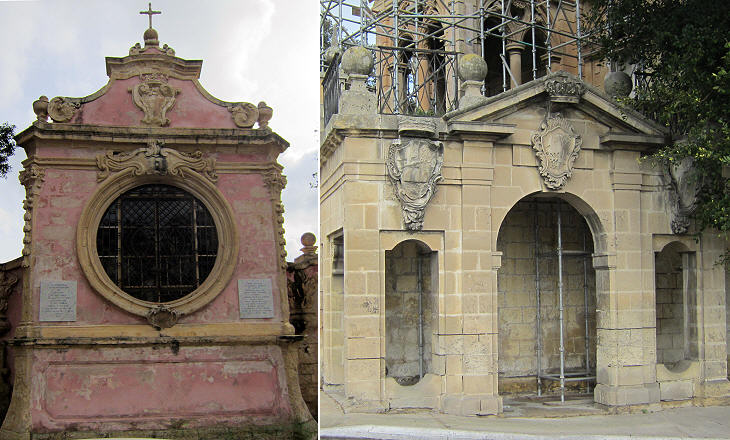 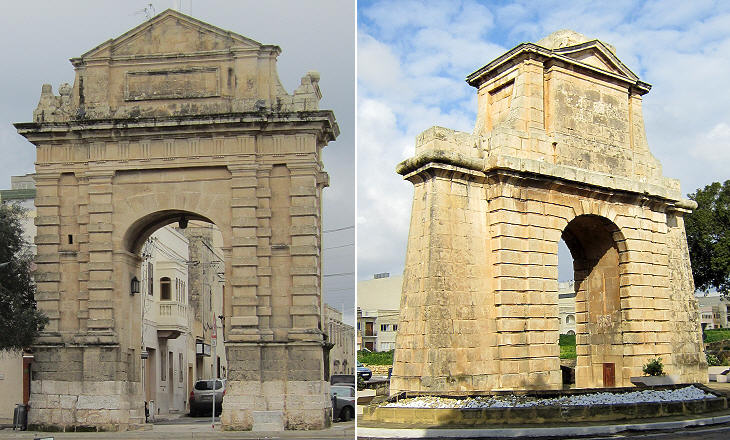 The last two Grand Masters who ruled on Malta built decorative, but rather plain arches at the entrance to towns where they had properties or of which they promoted the development. They probably had marble inscriptions which have been removed.

The image used as background for this page shows one of the lions at Casa Leoni.