- Malta before 1530
(detail of a statue of St. Catherine of the Wheel in the parish church of Zejtun)

There is an island called Melita, o judges, separated from Sicily by a sufficiently wide and perilous navigation. Fourth Oration of Cicero in the Trial of Gaius Verres. Translation by Charles D. Yonge (1888). 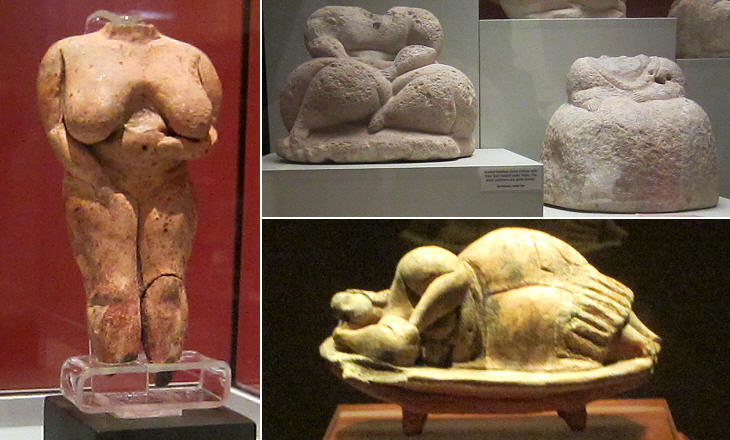 Malta seems to have been in the most ancient times nothing else but a great Rock, wholly overwhelmed and covered with the Sea especially if we consider the multitude of Sea shells of all sorts, Sharks teeth, vertebres of Thornbacks and other fish bones petrified found all over the Island even in the highest parts of it, and most remote from the shore.
John Ray - Observations (..) made in a journey through part of (..) Italy in 1663
The islands of Malta and Gozo were known to the ancients by the names of Melita and Gaulos, and under those appellations are mentioned by different classic authors. (..) Malta has attained celebrity in ecclesiastical history for the shipwreck of St. Paul on its coast, his residence of three months, and his successful propagation of the Gospel.
Richard Colt Hoare - A classical tour through Italy in 1790
Cicero wrote his oration in 70 BC; at that time seafaring in the Mediterranean was pretty common and yet travelling to Malta was regarded as a risky journey and the existence itself of the island was not widely known. An indirect confirmation of the isolation of Malta can be deduced by the way St. Paul's shipwreck on the island in 60 AD is described in Acts. 28: After we were brought safely through, we then learned that the island was called Malta.
The Maltese islands (Malta, Gozo and three islets) are located at the centre of the Mediterranean, but too far away from the coasts of Sicily and Africa to be routinely visited by ancient ships which followed a coastal route. In addition the islands do not have high mountains (the highest elevation reaches 258 meters, less than a thousand feet), so that they are not visible from a great distance.
Archaeologists believe that the first settlers did not come by sea, but by land during the last glacial period when the islands were part of Sicily, because the level of the Mediterranean was much lower than it is today (the maximum depth of the channel between Sicily and Malta is less than 150 m approximately 490 ft).
Notwithstanding their isolation the settlers developed beliefs similar to those of other ancient people whose economy was based on husbandry. This explains the number of small figurines portraying fat women, a symbol of fertility, which have been found on the islands. Archaeological Museum of Valletta: decorated slabs from the Tarxien Temples

During the early XXth century archaeologists found evidence of temples at different locations on Malta and Gozo. Those at Tarxien, near Valletta, are dated 3,000 BC ca and they were decorated with spiral motifs which are not very different from popular patterns of Classical Antiquity. Although the matter is still being debated, it appears that the civilization which developed on the Maltese Islands at one point disappeared leaving the islands almost unpopulated. 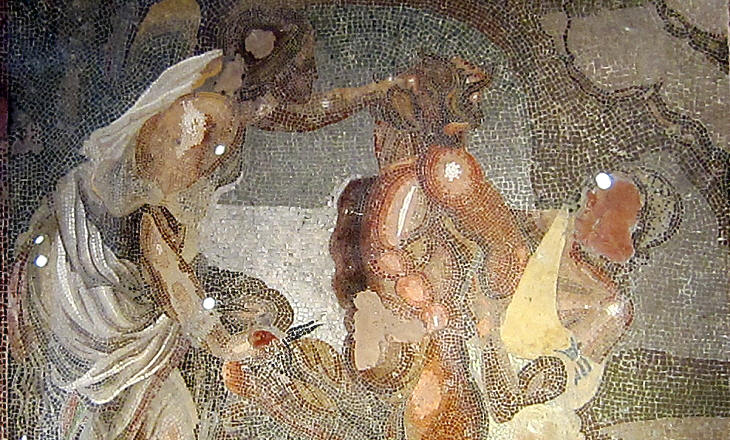 Roman villa at Melita (Mdina): detail of a mosaic portraying two maenads tormenting a satyr (you might wish to see other impressive Roman mosaics in Sicily and on the coast of today's Libya opposite Malta)

In early times these isles were inhabited by the Phoenicians, as we find in a passage from Thucydides. (..) These islands were afterwards occupied, for the same purpose, by their descendants and rivals, the Carthaginians. Colt Hoare
Eastern Sicily was colonized by the Greeks whereas the western part of the island, including Malta, was colonized by the Phoenicians who built a maritime empire which had its centre at Carthage. At the end of the First Punic War the Romans acquired Sicily from the Carthaginians, but Malta was conquered only during the second one.
For a long time a villa near Melita (Mdina), the capital of the island, was thought to be the only archaeological evidence of the Roman period, but in recent years remains of other villas and temples have been identified. According to tradition Fort S. Angelo at Borgo was built on the site of a temple to Juno. 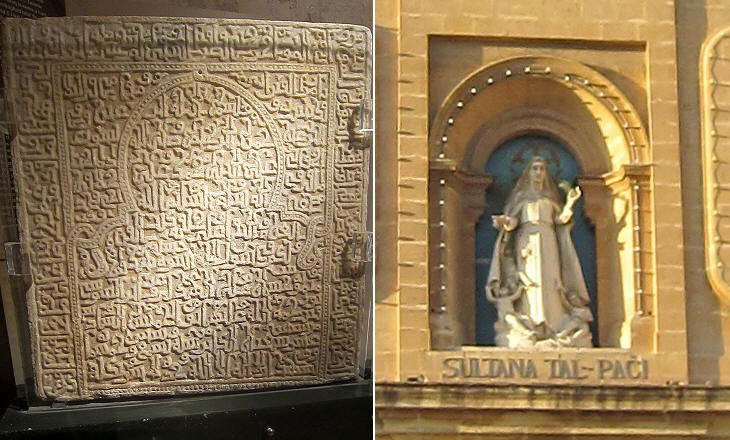 (left) Gozo Archaeological Museum: Muslim tombstone (the image used as background for this page shows another inscription in Arabic); (right) statue of the Virgin Mary on the façade of St. Joseph's at Msida, near Valletta. The invocation "Regina Pacis" (Queen of Peace) when translated into Maltese shows the Arab influence on the language spoken on the island

The islands shared the same fate as Sicily, in becoming subject to the Roman empire, and, on its decline, to the Saracens. Colt Hoare
In the Vth century AD the Vandals and after them the Goths seized Malta; in the following century it was annexed to the Byzantine Empire by Belisarius. In 870 the Arabs landed on the island from Tunisia and easily conquered it. A few years later Malta became part of the Fatimid Caliphate which ruled over most of the Muslim countries.
Malta was repopulated and efforts were made to improve farming. Melita was protected by walls and by a ditch and it was renamed Medina (walled town). The more lasting memento of the Arab rule is its influence on the language spoken by the Maltese today. They use many Arabic terms such as hamsa (five), gebel (hill), marsa (harbour) and sultan (sovereign). 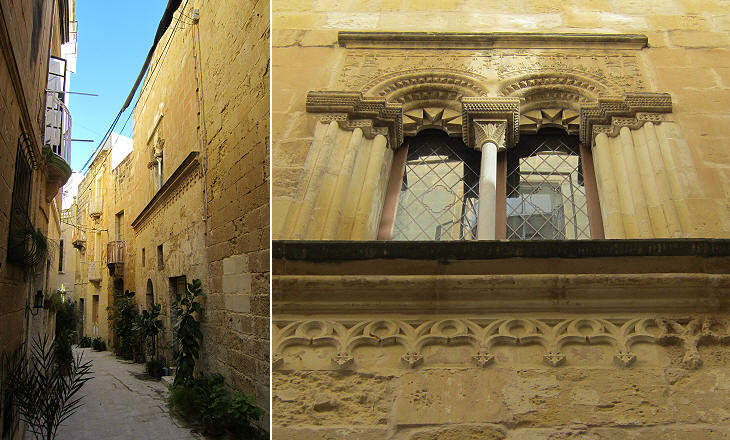 In 1089, Malta, with its dependent isle, was wrested from the king of Tunis, by Roger Count of Sicily; and subsequently, like Sicily, formed part of the Spanish dominions. On the expulsion of the Knights of St. John from Rhodes, they received these islands in fee from the Emperor Charles the Fifth, and have since continued to retain them. Colt Hoare
In 1061-1091 Robert Guiscard and his brother Roger conquered Sicily. Roger landed on Malta and was recognized as sovereign by the local qadi (the highest judge). The island became a county of Sicily. For a relatively long time Muslims were allowed to retain their faith, but eventually in 1224 Emperor Frederick II relocated all the Sicilian Muslims who were not prepared to convert to Lucera, a town in Southern Italy.
Malta followed the political developments of Sicily which in 1282, became a kingdom ruled by proxy by the Aragonese kings. Eventually the Kingdom of Sicily was inherited by Emperor Charles V who in 1530 assigned the County of Malta to the Knights of St. John who had been ousted from Rhodes in 1522.
The Normans/Aragonese fortified Borgo, a narrow peninsula inside the great natural harbour of Malta. They built small palaces there and at Medina (which they renamed Città Notabile) and Rabat (Victoria), the main town of Gozo. An aspect of the Norman/Aragonese rule was that it detached Malta from the sphere of influence of the Greek Orthodox Church and made it a stronghold of the Roman Catholic one.