- Kourion
(Petra to Romiou, where Venus was born)

On the hill to the west of Colossé I observed the foundations of a thick wall, which seemed to have encompassed some antient town, which probably was the city of Curium: And it is not unlikely that the grove, sacred to Apollo near Curium, was where the village of Episcopi now stands, which is a place abounding in water. The promontory Curias, from which they threw any one into the sea, who presumed to touch the altar of Apollo (..) is probable that it was from some point to the west of Curium, where there are high cliffs.
Richard Pococke - A Description of the East and Some Other Countries - 1745
On his way to Limassol from Paphos British traveller William Turner noted: We saw lying near our road two broken columns of granite whose isolated situation (for there was no other remnant near them) makes it impossible to guess of what they formed part. (..) At half past seven we stopped at Episcopi, a large Turkish village at the eastern foot of the mountains. (..) I saw in it the ruins of a large Roman aqueduct.
Journal of a tour in the Levant - 1815. 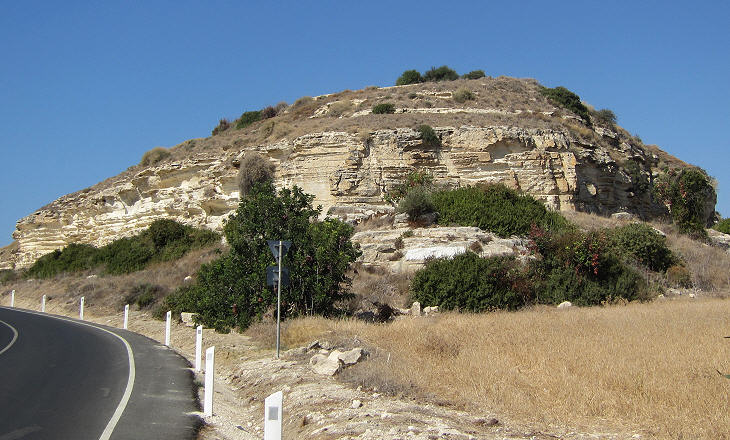 Rock upon which the acropolis of Kourion is situated

The ancient town was identified in the second half of the XIXth century, approximately where Pococke had guessed it stood.
Built like an eagle's nest, on the summit of a rocky elevation, 300 feet above sea-level, and almost inaccessible on three sides, the city must have defied in former days all foes, and her inhabitants must have enjoyed from that eminence, with the fine bay stretching away from the foot of the mountain, the lovely scenery which still presents itself on every side. Luigi Palma di Cesnola - Cyprus, its ancient Cities, Tombs and Temples - 1877.
Kourion was founded in the XIIIth century BC and it was listed with other Cypriot vassal towns in Egyptian and Persian records. It flourished during the Roman rule, it had a theatre, a stadium and an aqueduct supplied it with water. A famous sanctuary dedicated to Apollo was located near the town and attracted pilgrims from every part of the island. 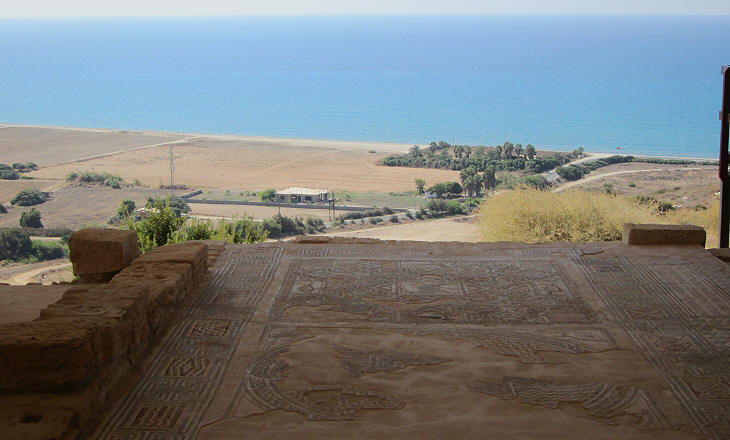 View of the coast from the House of Eustolius

The first excavations of Kourion were carried out by Luigi Palma di Cesnola, American Consul at Larnaka in 1865-1877. A large number of antiquities were shipped to New York for one of the first exhibitions of the Metropolitan Museum of Art. In 1879 Palma di Cesnola was appointed first director of the museum, which houses a large collection of artefacts from Kourion.
The genuineness of some of the findings was challenged: Its name (of Kourion) has been rendered famous in recent years by the strange controversy over the subject of Di Cesnola's supposed finding of the "Curium Treasure" in the '70's of the last century. The legal proceedings between M. de Feuardent and the General resulted in the latter maintaining his position (of Director), but since that period the place has sunk into its former oblivion.
George Jeffery - A description of the historic monuments of Cyprus - 1918. 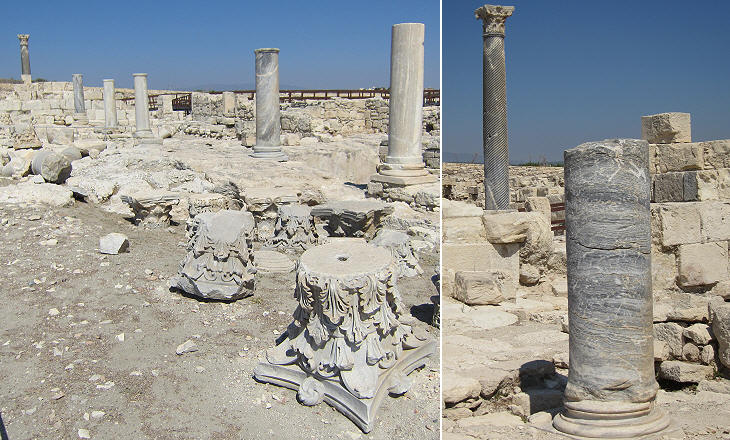 Systematic excavations of the ancient site started in 1933 and they led to the identification of several monuments mainly dated from the IInd to the Vth century AD. Although most likely the majority of the inhabitants of Kourion lived at the foot of the acropolis and near the harbour of the town, the agora/forum (early IIIrd century AD) was situated in the upper town. It had a rectangular shape and it was surrounded by columns of different stones having on top elaborate white marble capitals. 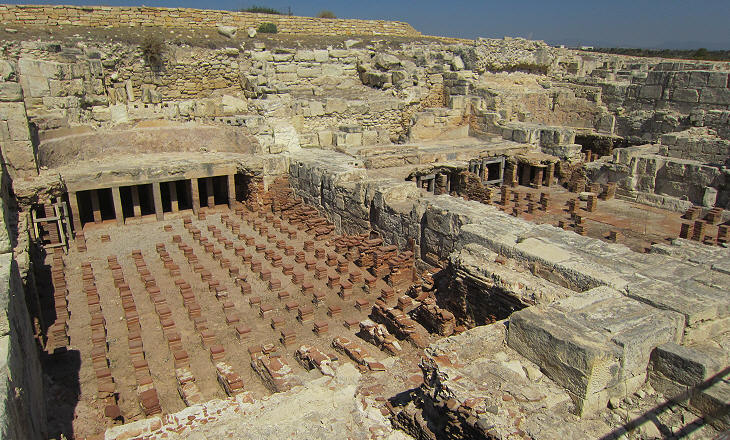 The agora was adjoined by public baths of which archaeologists have identified the lower structures retaining evidence of hypocausts, the underfloor heating system of the hot rooms. Near the baths a nymphaeum (monumental fountain) marked the end of an aqueduct which supplied the acropolis. 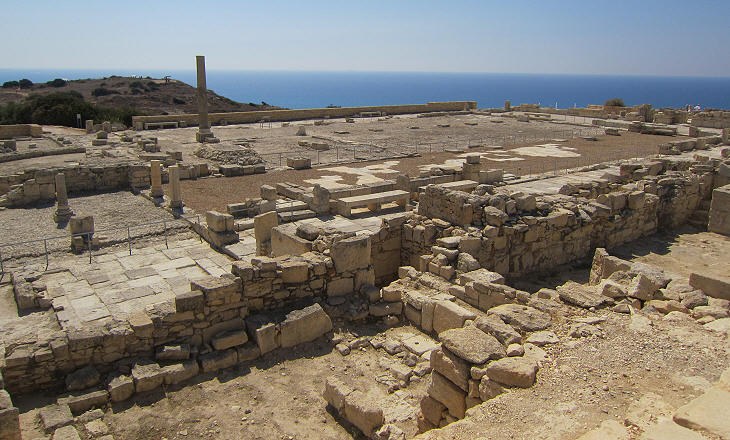 Usually archaeologists expect to find traces of temples near an agora, but in the case of Kourion these were most likely demolished in compliance with the decree issued by Emperor Theodosius II. Their columns were utilized in the construction of a large Christian basilica which was enlarged in the VIth century. It is possible that the temples were already in ruins because of a strong earthquake which hit Kourion in 365. 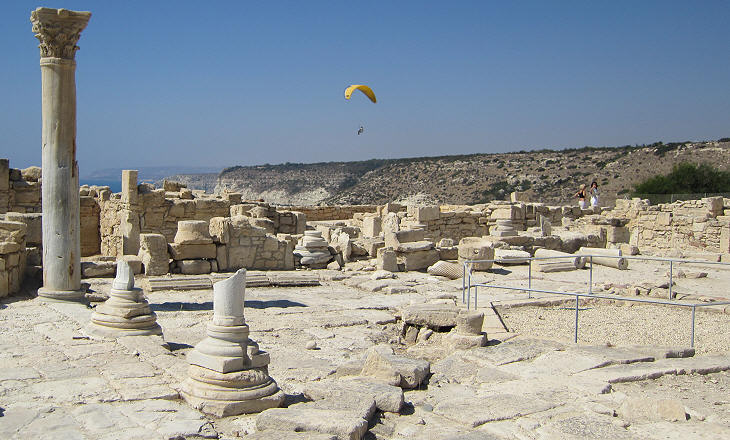 The basilica was part of a large complex of buildings on a terrace on the edge of a precipice which included the palace of the Bishop, a large atrium, a baptistery having the form of a small basilica and other ancillary buildings. After the Arab raids of the VIIth century the seat of the bishop was relocated to an inland village which for this reason is called Episcopi. 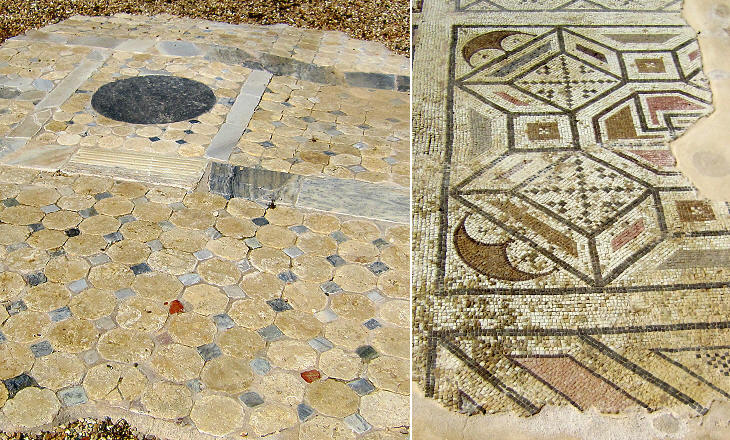 The floors of the basilica and of the adjoining buildings were embellished with geometric mosaics and marble inlays. The size of the complex and its elaborate design and decoration indicate that Kourion was an important and wealthy town at least until 541 when the Plague of Justinian dramatically reduced the population of the Byzantine Empire and disrupted trade. 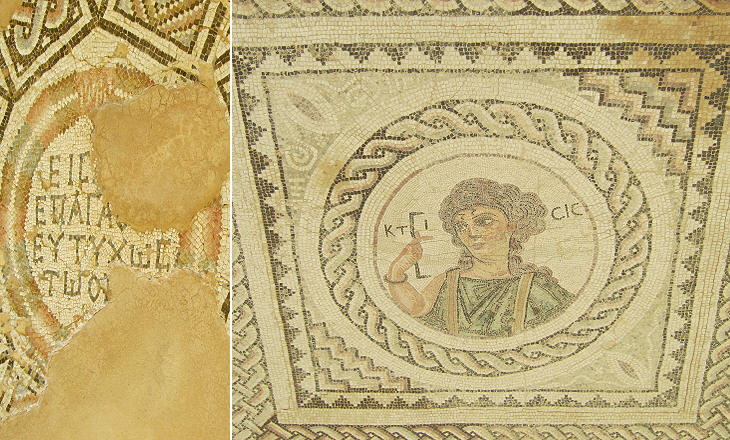 House of Eustolius: (left) welcoming inscription "Enter to thy good fortune and may thy coming bless this house"; (right) mosaic portraying Ktisis holding a tool for measurements

Another monument which testifies to the wealth of Kourion is the House of Estolius, which is composed of a large series of halls located in the most panoramic section of the acropolis. It is broadly contemporary to the basilica and is the result of a restoration of previously existing houses. Most of the mosaics which decorated the house have been found in good condition. Eustolius was a Christian and the mosaic portraying Ktisis (Greek word for foundation) celebrates the construction of the house, rather than an ancient goddess. Another mosaic of the same period portraying Ktisis was found in Lebanon. House of Eustolius: mosaics. The plait motif of these mosaics is typical of the decoration of medieval portals and windows at Rhodes and Lindos. You may wish to see a collection of Early Christian mosaics in Lebanon

Another inscription in the house celebrates what Eustolius did for Kourion: "The citizens of Kourion, who once had considerable wealth, were now in abject misery. When Eustolios saw this he did not forget his land, but naturally remembered her with love, presenting the city with baths. He indeed took care of Kourion, as Phoebus (Apollo) had once done, by restoring calm in the earthquake-struck land." 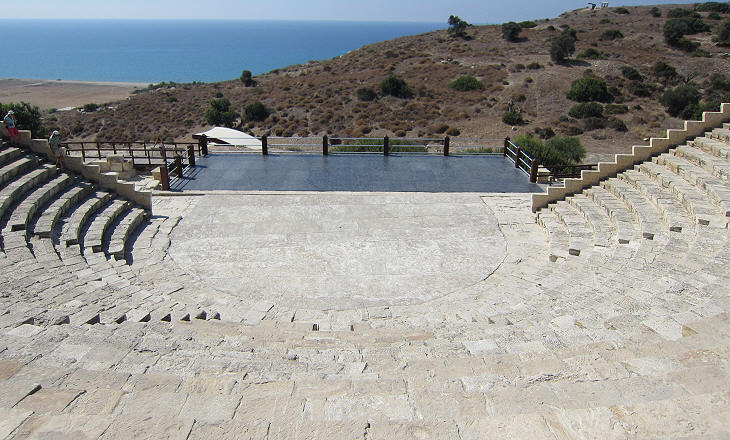 Entering the city from its southern gateway, and walking a few minutes in a north-easterly direction, one meets with the ruins of a semi-circular structure, 720 feet in circumference, probably those of a theatre. Palma di Cesnola.
Similar to what has occurred at Paphos and Salamis, the ruins of the ancient theatre of Kourion have been replaced by a modern structure. 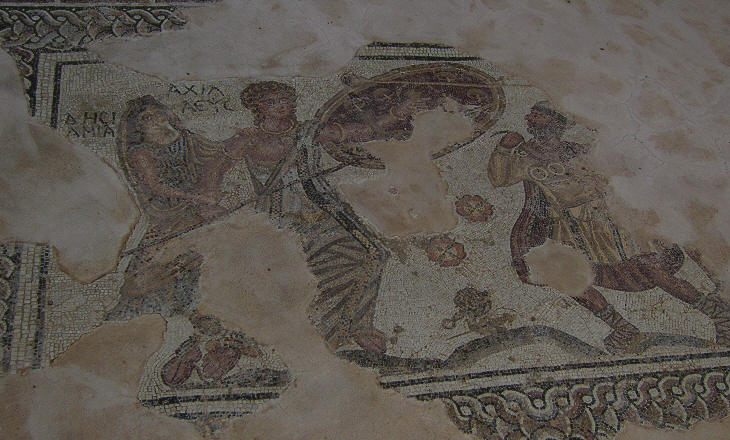 House of Achilles: Ulysses (right) finds Achilles (centre) at Skyros, where the latter, disguised as a woman, fell in love with Deidamia (left): more on this episode in a page covering a finer mosaic in Algeria

The mosaics found at Kourion cannot compete in number with those found at Paphos, yet they are worth the effort of reaching the western end of the town where they are situated. The House of Achilles, after an early IVth century mosaic portraying that Greek hero, was most likely reserved to distinguished visitors to Kourion. 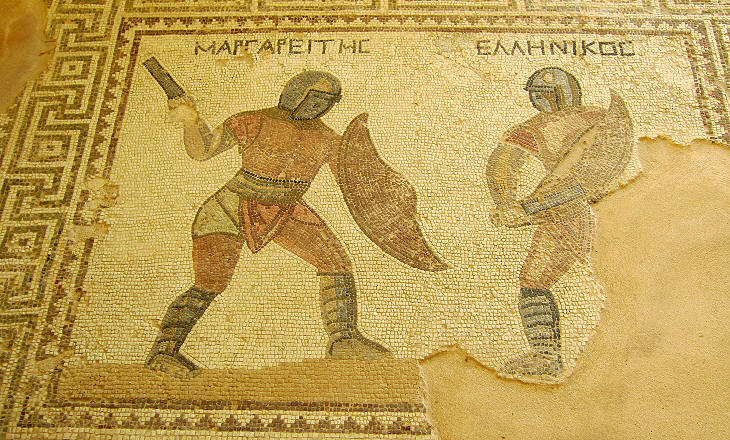 House of Gladiators (second half of the IIIrd century)

Fights between gladiators were one of the most popular subjects in Roman mosaics (you may wish to see a mosaic which was found in the environs of Rome and one near Trier in Germany). The image used as background for this page shows a detail of another mosaic at the House of Gladiators. 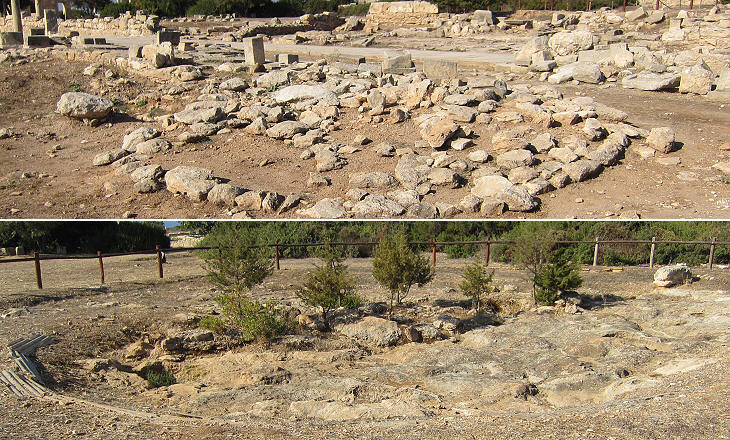 Temple to Apollo: (above) archaic circular altar; (below) site of the sacred wood

Like most ancient sites in Cyprus the site of the temple presents an immense area of stone-chippings, the refuse left behind by the generations of stone robbers who have broken up the large masonry for convenience of transport on camels and donkeys to the sea-shore. As a consequence the majority of the columns, and all the walls, steps, platforms, etc., have disappeared, but sufficient indications remain for a certain amount of restoration on paper of the building. Palma di Cesnola
The sanctuary to Apollo Hylates is situated two miles to the west of Kourion on a commanding position. It was dedicated to Hylates, a local god of the woods who was eventually associated with Apollo. 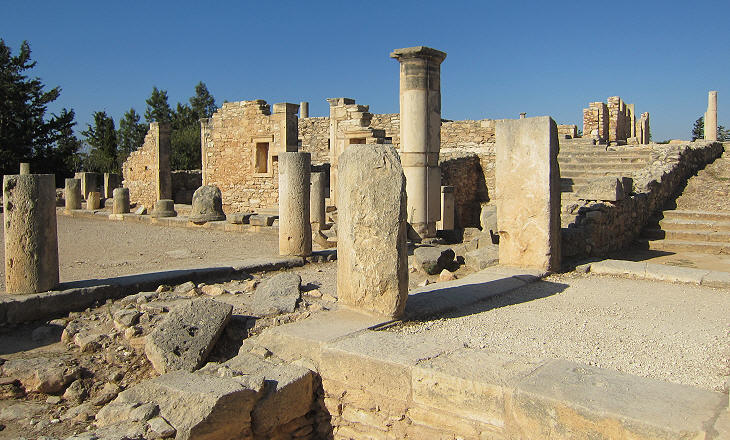 Temple to Apollo - Gymnasium and dormitories

Archaeologists have worked hard to at least understand the purpose of the various buildings which made up the sanctuary. The best preserved section includes a series of dormitories and a gymnasium which were built or renovated at the time of Emperor Trajan. These buildings were aligned along a straight road which crossed the area of the sanctuary from the Paphos (western) Gate to the Kourion (eastern) Gate. 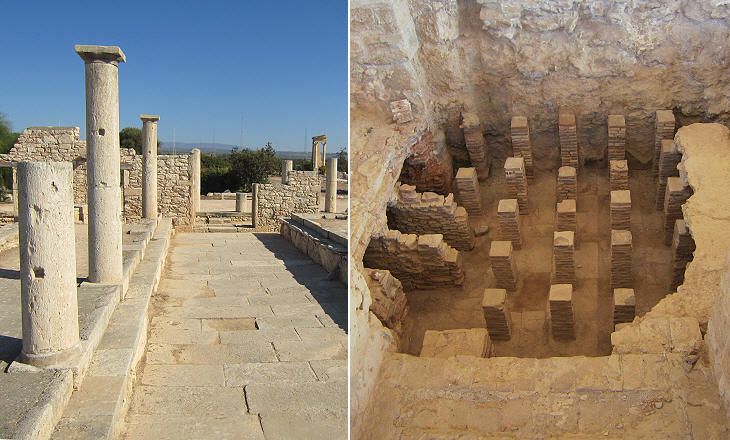 Temple to Apollo: (left) a dormitory; (right) hypocaust of baths

Pilgrims made votive offers to Apollo; archaeologists have found a building where they were displayed and a sacred pit where they were stored. Thieves and profaners of the sanctuary were sentenced to death and they were thrown down from the cliff into the sea.
The sanctuary was abandoned after the 365 earthquake. At that time on Cyprus and in general in the eastern part of the Roman Empire the Christian faith was largely prevalent. 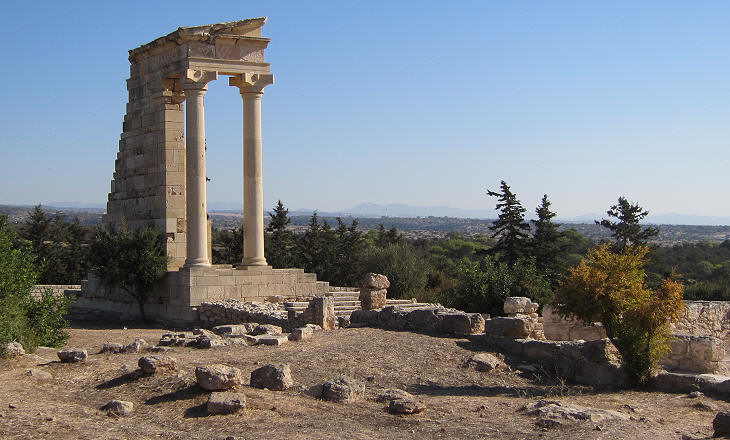 Archaeologists have identified the site of the temple, of which only some steps leading to it remain. To give an idea of its size and design they have built a small section of its assumed façade. The southern part of Cyprus is rather arid, but the sanctuary is surrounded by woods where perhaps Apollo Hylates is hiding (you may wish to see Dodoni, another sanctuary surrounded by woods). 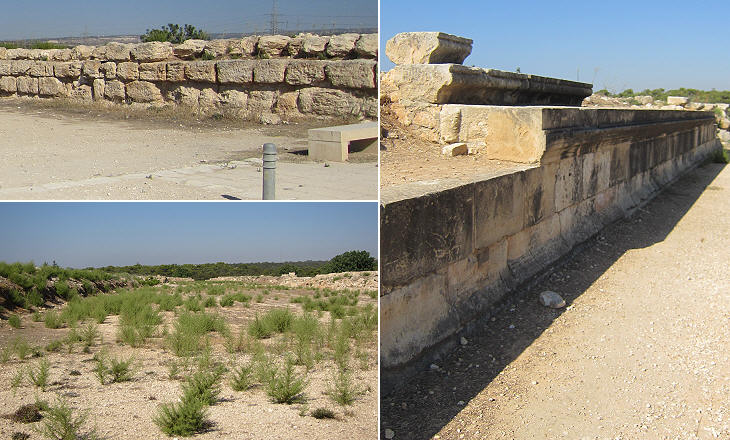 The sanctuary, similar to many other holy sites, housed a periodic festival which included running races which took place at a stadium midway between Kourion and the sanctuary. Stadion is an ancient Greek unit of length equal to 600 feet and the stadium, which was built in its present form at the time of Emperor Antoninus Pius, was long a stadion (you may wish to see the imposing stadium of Afrodisias and that of Olympia).