The Horti Lamiani. These beautiful gardens were largely excavated under my own supervision between 1873 and 1876, and they yielded the richest archaeological harvest we have ever been able to gather in Rome from a single spot since 1870. They were an enchanted, fairy-like place, extending over the highest plateau of the Esquiline, from which such a glorious view is obtained of the Alban, the Praenestinian, and the Sabine hills.
Rodolfo Lanciani - New Tales of Old Rome - 1901 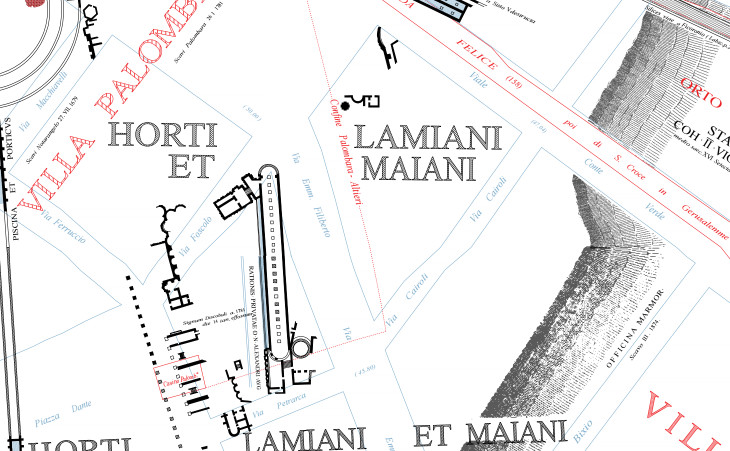 Rodolfo Lanciani - "Forma Urbis Romae" 1893-1901 - detail showing: (in black) evidence of ancient Roman buildings of "Horti Lamiani": the black dot indicates those which are covered in this page; (in red) the border between Villa Palombara and Villa Altieri in the XVIIIth century; (in blue) the new development surrounding Piazza Vittorio Emanuele II which was built after 1870

In 1874 while our men were excavating at the corner of the Via Foscolo and the Via Emmanuele Filiberto, at the north end of a gallery, the ground gave way, giving us access to a crypt or cellar on the floor of which we found lying the celebrated bust of Commodus in the character of Hercules, flanked by two tritons or marine centaurs. (..). There were also the Venus Lamiana (..) and a Bacchus of semi-colossal size, with drapery of gilt bronze (missing); and about twenty-five legs, arms, hands, and feet belonging to statues whose bronze drapery had likewise been stolen before the concealment. Lanciani
After the move to Rome of the capital of Italian Kingdom in 1871 a plan was developed for the construction of middle class houses on the area of the villas near the Railway Station. Rodolfo Lanciani supervised the preliminary excavations to identify evidence of ancient buildings and save their works of art before they were covered by the new development. He eventually drew a detailed topographical map showing his and previous findings in the context of modern Rome. 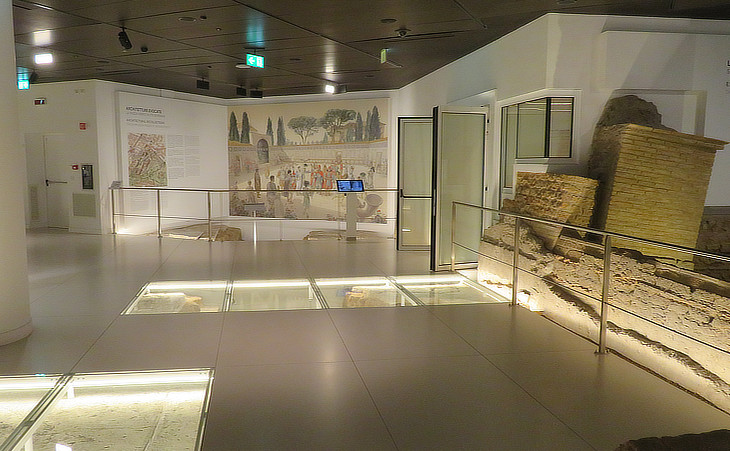 By the end of the XXth century a building at the corner between Piazza Vittorio Emanuele and Via Emanuele Filiberto had almost collapsed. It was known that it stood above some ancient walls which had been identified by Lanciani. It was entirely rebuilt and turned into the headquarters of ENPAM. Careful excavations carried out in 2006-2009 and 2010-2015 with the help of a team of archaeologists and restoration specialists led to finding hundreds of thousands of fragments of ancient items. They allowed a better understanding of the different uses of the site in Roman times. ENPAM decided to create a small museum to exhibit the most interesting of them in situ, i.e. on the site where they were found in order to provide the neighbourhood with a memento of its past. 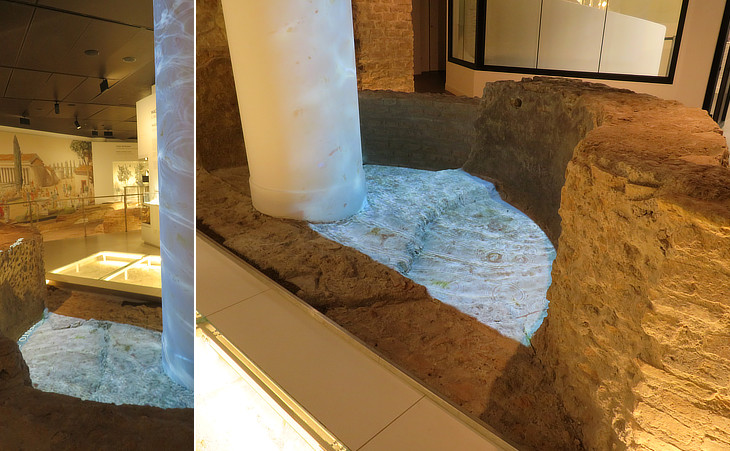 The "nymphaeum" (fountain) after which the museum is named (Museo Ninfeo)

The museum was opened in October 2021. The small fountain embellished a large open air hall of the early IIIrd century AD. It was paved which large marble slabs which can be seen through a protective glass. This utilization of the site is the last one before the decline of Rome entailed the abandonment of all the horti on the Esquiline hill. 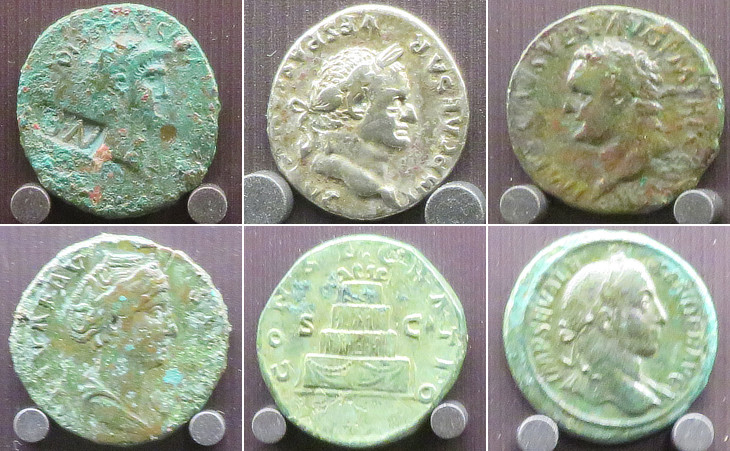 Coins which were found during the excavations: (above): (left) dupondius of Nero - mint of Buthrotum; (centre) denarius (silver) of Vespasian; (right) as of Titus; (below) (left) sestertius of Antoninus Pius portraying his wife Annia Faustina; (centre) sestertius of Marcus Aurelius depicting the funerary pyre of Lucius Verus; (right) as of Alexander Severus

As: the lowest valued coin regularly issued during the Roman Empire; dupondius: value two asses; it was distinguished from the as by the crown worn by the emperor; sestertius: value four asses and the standard unit of account; denarius: value four sestertii.
Usually archaeological museums exhibit the Roman golden coins (see those at Palazzo Massimo), which very often were found in hoards. The coins which are shown at Museo Ninfeo are all small value coins and they help to establish the historical phases of Horti Lamiani, a villa which was named after Lucius Aelius Lamia, consul in 3 AD, its first owner. The property was soon acquired by the imperial family. Prior to the construction of Horti Lamiani this part of the Esquiline hill was farmed in addition to housing some cemeteries and quarries. 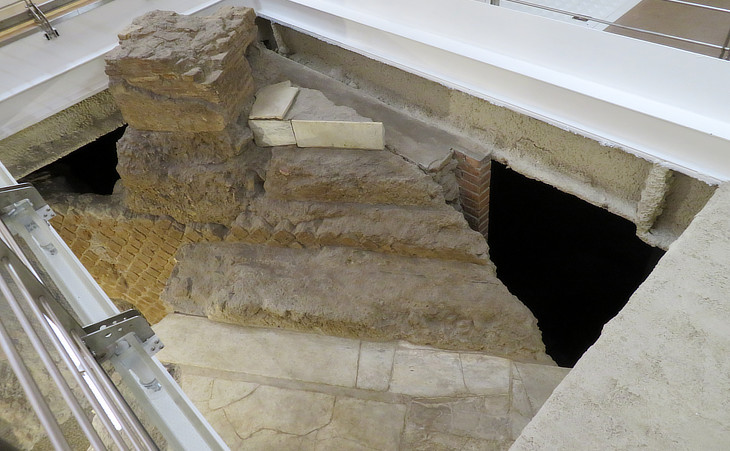 He entered into the outer buildings, examining the chambers of the men and the chambers of the women, and the rooms on the ground floor, and all the apartments in the upper story, and blaming some points of their preparation as defective, and planning alterations and suggesting designs, and giving orders himself to make them more costly (..) He ran forward and burst into the principal building, and as soon as he had entered he commanded the windows which were around it to be filled up with the transparent pebbles very much resembling white crystal which do not hinder the light, but which keep out the wind and the heat of the sun.
Philo - Embassy to Gaius (Caligula) - Translation by Charles Duke Yonge
Philo was a Hellenistic Jewish philosopher who participated in an embassy of the Alexandrian Jews to Emperor Caligula in 40 AD. It appears that he was received at Horti Lamiani by the emperor himself who was busy at making recommendations for the improvement of the villa. At that time the area of Museo Ninfeo housed terraced gardens. Archaeologists have found bones of peacocks, ostrichs, bears and deers which were let free to wander in the gardens or kept in cages. 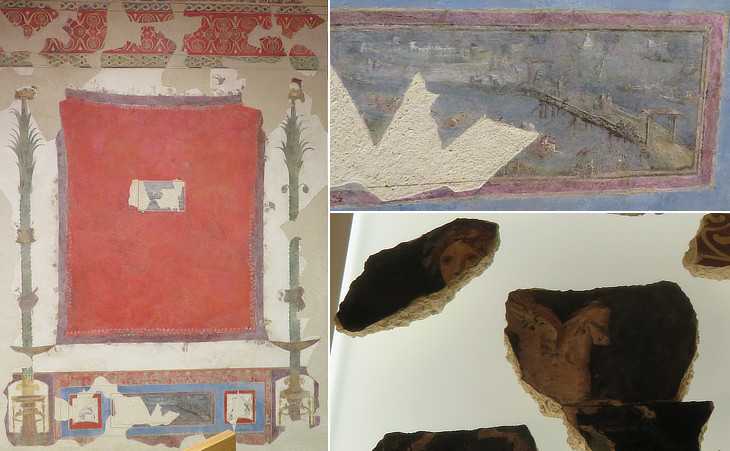 Frescoes: (left) a large reconstructed fresco which decorated a corridor; (right-above) a detail of it depicting a town by the sea; (right-below) fragments of other frescoes having a black background

The fragments of painting which were found amounted to tens of thousands; it was possible to reconstruct an entire wall. The stylistic analysis of the paintings indicated that, similar to the steps, they were made at the time of Caligula or Claudius, his successor. Their main feature is the presence of miniature paintings inserted into a single colour background which is typical of the third style of Pompeii. The use of a black background is found also at Pompeii. 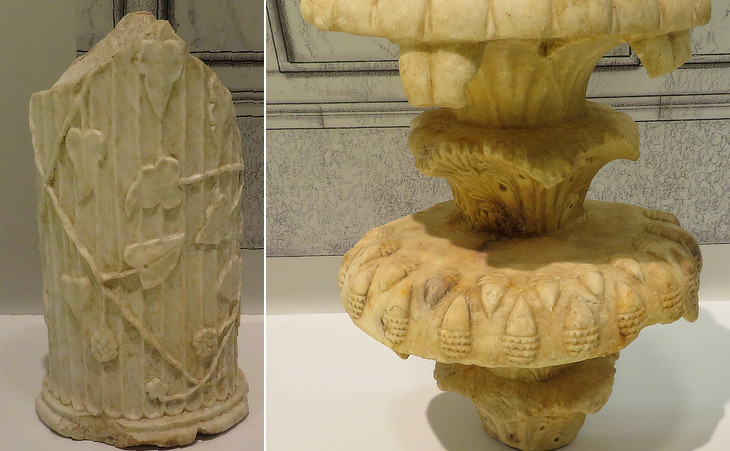 The decoration of the Horti in the palmy days of the Empire (Lanciani) was always very elaborate. The image used as background for this page shows a fine terracotta relief depicting a sphinx.
A funerary inscription of the time of Claudius mentions a Moscho proc(uratore) / hortorum Maianorum et Lamianor(um), an imperial officer in charge of Horti Lamiani and Horti Maiani, another nearby imperial estate or maybe an abbreviation of Ma(ecenat)iani, i.e. the Horti of Maecenas, the first ones to be developed on the Esquiline hill. 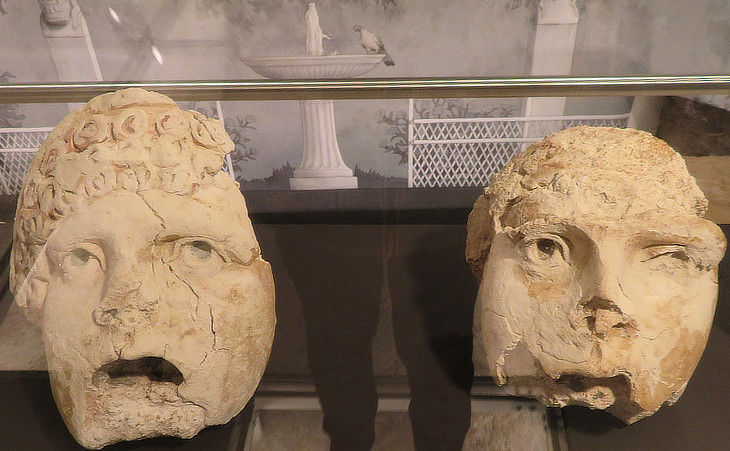 Two theatrical masks made up of marble powder

These two masks are among the most interesting findings of the excavations. They were found by chance in a spot which had been filled with earth. They were carefully cleaned and restored; they bear traces of painting in the hair. Similar to Gorgons they had apotropaic features, i.e. they chased evil spirits away. Most likely they were placed on the wall of a small pavilion at the sides of its entrance. You may wish to see a very fine mosaic depicting theatrical masks which was found on the Aventine hill. 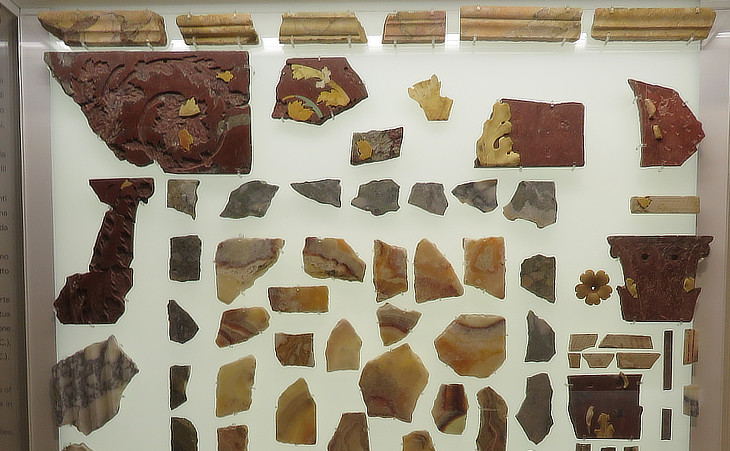 The first person at Rome who covered the whole of the walls of his house with marble, according to Cornelius Nepos, was Mamurra, who dwelt upon the Caelian Hill, a member of the equestrian order, and a native of Formiae, who had been praefect of the engineers under C. Caesar in Gaul. (..) Nepos adds that he was the first to have all the columns of his house made of nothing but solid marble, and that, too, marble of Carystus or of Luna. (..) The marbles are too well known to make it necessary for me to enumerate their several colours and varieties; and, indeed, so numerous are they, that it would be no easy task to do so. For what place is there, in fact, that has not a marble of its own? In addition to which, in our description of the earth and its various peoples, we have already made it our care to mention the more celebrated kinds of marble.
Pliny the Elder - The Natural History - Book XXXVI - Transl. John Bostock, and H.T. Riley
Samples of the finest marbles of the Empire were found during the excavations and they were arranged in order to form a sort of wall. Some of the marbles were used for decorative inlays depicting columns and capitals, a practice which developed in the Late Empire (see an impressive hall with a similar decoration which was found at Ostia and a panel of varieties of Marmor Numidicum at Simitthus in Tunisia). (left) Other items including a glass container for unguents, a strigilis, pins, rings, engraved stones; (right) a bone decoration for a piece of furniture

The museum houses some 3,000 items grouped in 13 sections covering different aspects and historical periods of the Horti. You may wish to see other luxury items which were found by Lanciani at a nearby site.
The Horti were abandoned in the IVth century AD and eventually they were partially farmed in the proximity of the first large churches, e.g. S. Eusebio.

Other Days of Peace pages:
A Sunny Day in Villa Borghese
At the Flea Market
At the Beach
Voicing Your Views ..... and feeling better
Christmas in Rome
Eating Outdoors
Celebrating the Foundation of Rome
A visit to Roseto di Roma
The procession of La Madonna de Noantri
Running the Marathon
Watching the Parade
Finding Solace at the Protestant Cemetery
Attending 2007 July Events
Rome's Sleepless Night
Attending Winter Ceremonies
Jogging at Valle delle Camene
Sailing on the River to see the Bridges of Roma
An October Outing to Marino
Attending a Funeral ...and enjoying it!
A Special Spring Weekend
Embassy-hunting in Parioli
Celebrating Eritrean Michaelmas in Rome
Visiting Rome at Dawn
Visiting Rome in the Moonlight
Visiting Rome on a Hop-on-Hop-off Bus
Visiting Multi-ethnic Rome
Baroque Fireworks
Playing in the Snow at the Janiculum
Watching the Pride Parade
Visiting the Movie Sets at Cinecittà
Reading Memoirs of Hadrian at Villa Adriana
Looking up at the Ceilings of the Vatican Palaces
Reading Seneca at the Baths
Spending the Last Roman Day at St. John Lateran's Cloister
Reading Ovid at St. Peter's
Walking the Dog at Valle della Caffarella