You may wish to read a page on the ancient past of Grosseto and its environs first. 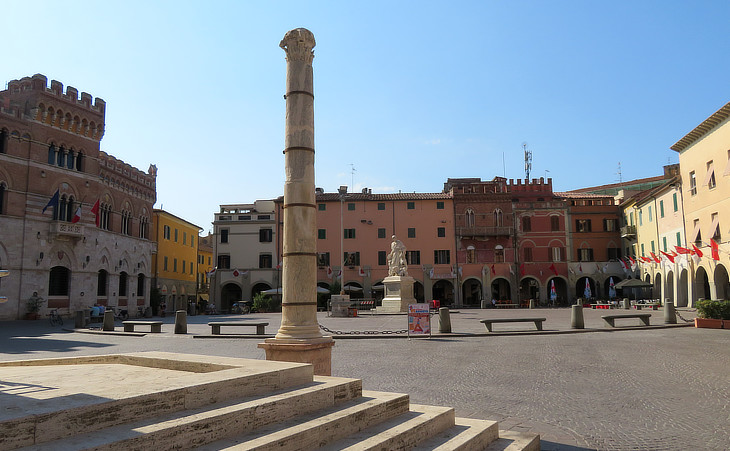 Piazza Dante, the main square of historical Grosseto, but its apparently medieval aspect is the result of a XIXth redesign; the Roman column from Rusellae was erected in 1966

I entered an extensive plain, as flat as those of Holland. Near the further extremity is Grosseto, the capital of the Maremma, fortified with bastions, &c. but unprovided with soldiers. The bad air prevails here, and proves a serious check to the commerce and population of the town. Such ground as is cultivated produces abundant crops of corn; but hands are scarce, for few can be tempted to stay and gather the harvest, even by the high wages of five pauls a day, with provisions. Indeed most of those, who are seduced to remain in this unwholesome climate, pay the penalty of their imprudence by the loss of life or health. (..) A noble hospital has lately been built at Grosseto, the design of which must be in a great degree frustrated by the want of proper assistants, who, in contributing to the cure of others, fall victims themselves to disease, proceeding from deleterious air.
Richard Colt Hoare - A classical tour through Italy and Sicily - 1819
You emerge into a vast, treeless, houseless moor, or rather swamp, containing the waters of the Lake Castiglione, the Lacus Prelius or Aprilis of antiquity, and realizing all your worst conceptions of the Maremma, its putrescent fens, its desolate scenery. You must make a wide circuit at the edge of the swamp, beneath the Monte Pescale, ere you reach the gates of Grosseto. (..) Grosseto, the capital of the Tuscan Maremma, stands on the very level of the plain. It has two or three thousand inhabitants (..) and an inn, whose praises I cannot express better than by saying it is one of the best in Tuscany, south of Florence. The padrona, the widow Palandri, is known far and wide through the Maremma - nay, throughout the Duchy - not only for the excellence of her accommodation, but for her boast of having resided, maid, wife, and widow, more than sixty years at Grosseto, summer as well as winter, and in robust, uninterrupted health - a living monument of the elasticity of the human frame, and of its power to resist by habituation the most noxious influences of Nature. For Grosseto, though protected from the assaults of man by strong fortifications, has no safeguard against the insidious attacks of the marsh-fever, which desolates it in the summer.
George Dennis - The Cities and Cemeteries of Etruria - 1848. 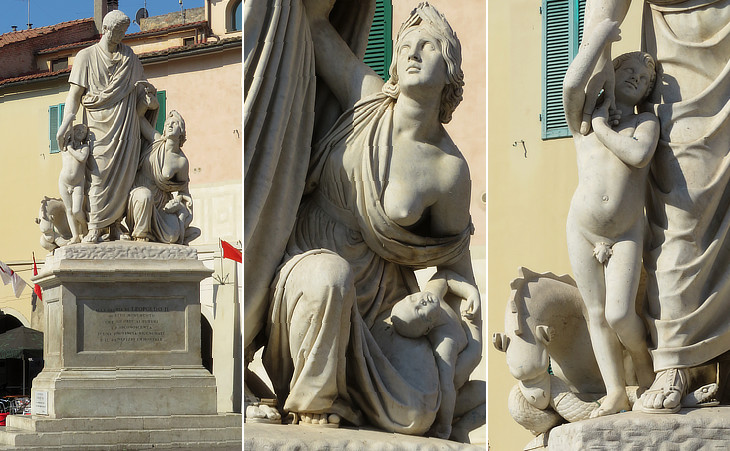 (left) 1846 Monument to Grand Duke Leopold II of Tuscany in ancient Roman attire by Luigi Magi; (centre) personification of Maremma with a fever-stricken child; (right) a healthy child at the side of the Grand Duke who crushes the snake of malaria which is also attacked by a griffin, the heraldic symbol of Grosseto

Grosseto, the capital of the Maremma is a regularly fortified town; the walls of which form a pentagon, with brick bastions and 2 gates. It is an episcopal town of 3000 souls, and possesses both a cathedral and a theatre.
John Murray - Handbook for travellers in central Italy - 1853
The rail-road leaves the coast at Follonica, and runs inland for half the way through a long barren valley, between heights covered with brushwood. (..) Grosseto, the capital of the Tuscan Maremma, stands on the very level of the plain. It has five thousand inhabitants - a population almost doubled in winter; and in comparison with the towns and villages in its neighbourhood, it seems an oasis of civilisation; for it has an air of neatness and cleanliness, hanging gardens on its ramparts, a small but pretty cathedral, a faint reflection of the glories of Siena, a theatre, and an inn. Dennis 1878 edition
Leopold II, Grand Duke of Tuscany from 1824 to 1859, was personally involved in promoting the reclaiming of the swamps surrounding Grosseto. The method which was employed had been successfully tested in Val di Chiana by his predecessors. It is called a colmata (fill-up), and it required the deviation of the River Ombrone into the swamps, so that its deposits raised the level of the ground. 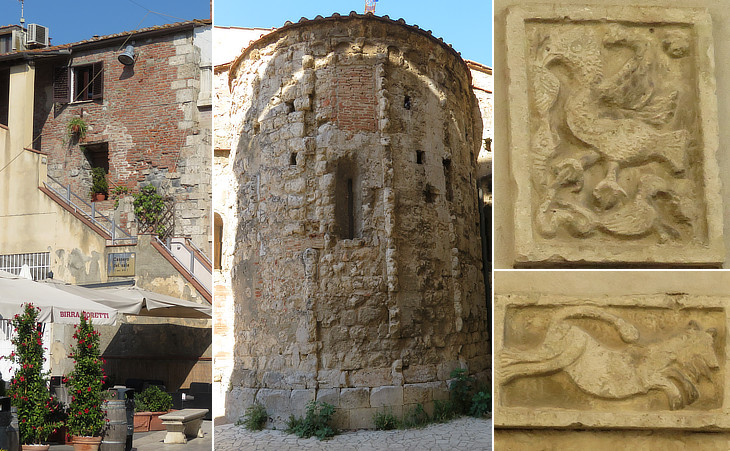 The move of the episcopal see from Rusellae to Grosseto occurred in 1138, but already before that year the site was populated. It was located along Via Aurelia and although the Roman road had lost its importance and some bridges had fallen, yet it was still used by some pilgrims on their way to Rome, although the majority of them utilized an inland road.
The sea water swamps near the town which were so unhealthy for the population, were a very important economic resource, because salt could be extracted by artificially made shallow ponds. Salt was stored in fortified warehouses near the southern gate of the town.

The possession of Grosseto was at the centre of a series of war between the Aldobrandeschi, feudal lords of a county bordering on the Papal State, and Siena, an independent comune aiming at expanding its territory and at establishing a monopoly on the trade of salt. Eventually in 1336 Siena had the upper hand and new fortifications were erected to protect Grosseto. In addition to the walls Siena built a cassero (from Arabic "al qasr" - the castle which in turn derives from Latin "castrum") is a term used only in Tuscany and Latium, (see Porta del Cassero at Civita di Bagnoregio). Cassero Senese was incorporated into the new fortifications built by the Medici in the XVIth century. 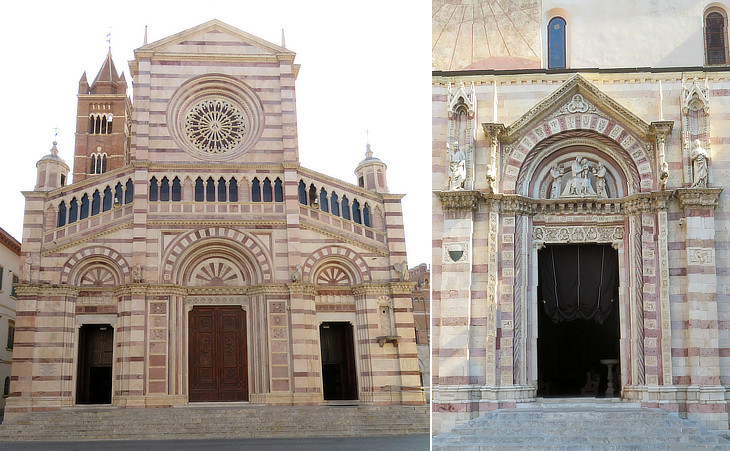 The Cathedral was built at the end of the XIIIth century on the site of a previous church. The façade was largely redesigned in the XIXth century and only the lower part up to the lintels of the three portals is original. An inscription placed in 1294 by Filippo Malavolti, podestà (governor) on behalf of Siena celebrated the event (the image used as background for this page shows a ladder, the heraldic symbol of Malavolti). The façade and the side portal were designed by Sozzo Rustichini, an architect from Siena who was involved in the construction of the Cathedral of that town.

At the time the Cathedral was built sculptors and painters were regarded as craftsmen and they belonged to a guild. The first architects were painters or sculptors or both. This approach was followed for several centuries and many of the best known Italian architects started their career as sculptors, e.g. Gian Lorenzo Bernini. The reliefs of the portals were executed by Sozzo Rustichini and his assistants. You may wish to see a relief where il Filarete portrayed the seven assistants who helped him to make a door of S. Pietro in ca 1450. 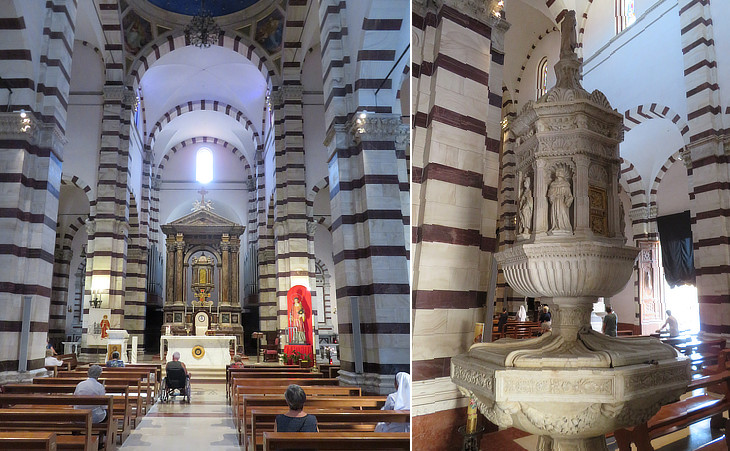 The interior was redesigned in the XVIth, XVIIth and XIXth centuries. Some of the works of art which embellished it were destroyed in the process or removed. It retains a fine 1470 baptismal font by Antonio di Ghino, a sculptor from Siena. 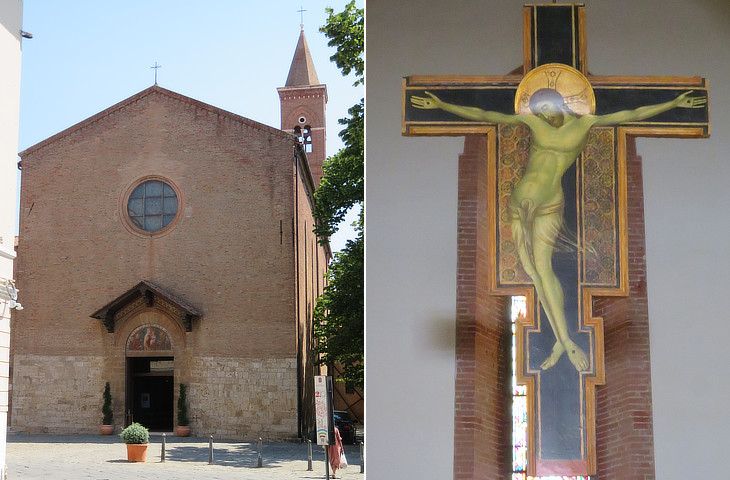 Grosseto was a bishopric see, but the population of its diocese was very small. Among the great orders only the Franciscans built a convent in town. In line with their tradition the church had a very simple façade. The large painted Crucifix is traditionally attributed to Duccio di Boninsegna who is considered the "father of Sienese painting". 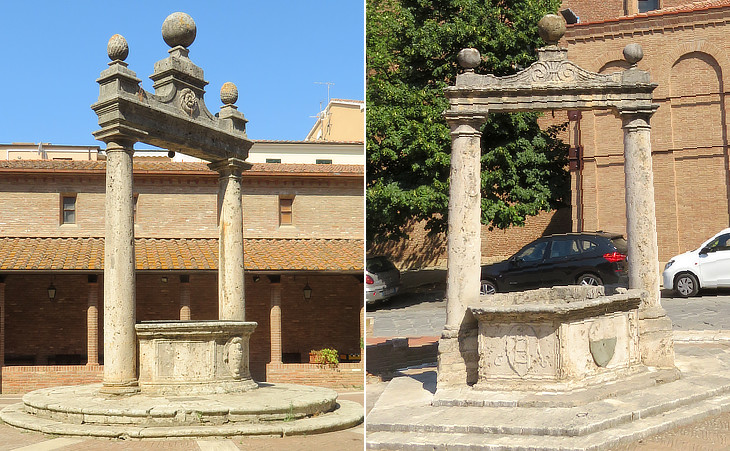 Grosseto did not have public fountains and the inhabitants had to dig wells to access groundwater. The 1465 well was decorated with the Siena black and white shield and the ladder of the Malavolti, a leading family of Siena. Even though the wells had a very utilitarian purpose they were designed to please the eye. 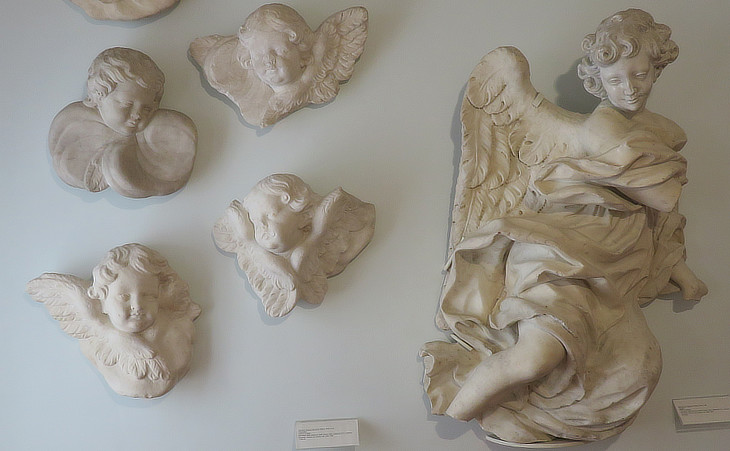 Museo Diocesano - from the Cathedral: 1692 angels by Giovanni Antonio and Francesco Mazzuoli

Bernini was surrounded by friends, old and young, who always remained true to the art of their master. Among the (..) younger men there were Giulio Cartari, who had accompanied Bernini to Paris, Michele Maglia, Filippo Carcani, and above all Giuseppe Mazzuoli (..), born near Siena, who inundated Siena with Berninesque statuary. (..) The most important artist of this group was Mazzuoli (1644-1725); it was he rather than anybody else who kept the Berninesque tradition alive into the eighteenth century.
Rudolf Wittkower - Art and Architecture in Italy 1600-1750 - 1958
Giovanni Antonio and Francesco were elder brothers of Giuseppe Mazzuoli; their father Dionisio was a sculptor too. You may wish to see some busts by Giuseppe Mazzuoli at S. Francesco a Ripa in Rome.

Grosseto is indebted with Siena for the works of art which embellished its churches. Sano di Pietro is regarded as a leading master of the School of Siena, but he ran a workshop which received too many commissions so that the number of paintings attributed to him is so high that his works are often repetitive.

In 1559 at the end of a long war and in the frame of the Peace of Cateau-Cambrésis between France and Spain, the Republic of Siena was assigned as a separate dukedom to Cosimo I de' Medici, Duke of Florence. Grosseto was loyal to Siena throughout the war. The two dukedoms were united in 1569 when Pope Pius V granted Cosimo the title of Grand Duke of Tuscany. In 1574, Francesco I, Cosimo's son began the construction of new state-of-the-art walls, but the old southern gate of the town was not pulled down. It was protected by a bastion which was removed in 1882 to facilitate the access to the gate.

(left) Bastione Maiano (the name of a local stream) or delle Palle, the popular name of the Medici's heraldic symbol; (right) its "orecchione" ("large ear" bastion)

The discovery of gunpowder and its military applications caused a revolution in the common systems of defence, which had not changed substantially from the Roman period. New methods of laying out urban defences were developed in the XVIth century to respond to the evolution of fire arms and their increasing power. Early examples of modern fortifications can be seen at Nettuno and Rhodes. The threat of corsair raids and the fear of an Ottoman invasion led the Popes to fortify the walls of Rome and to strengthen those of Castel Sant'Angelo. Imposing walls were built to protect La Valletta, the new capital of Malta. The fortifications of Grosseto (and those built by Spain at Orbetello) ensured that corsairs from Algiers who had managed to land on the marshy coastline of Maremma could not raid the town or move inland towards Siena. Up until 1757 the walls were surrounded by a navigable moat; you may wish to see the walls of Peschiera del Garda which are still surrounded by a moat and were built in the 1550s or those of Palmanova, the finest example of Italian military architecture, which were built in the 1590s. 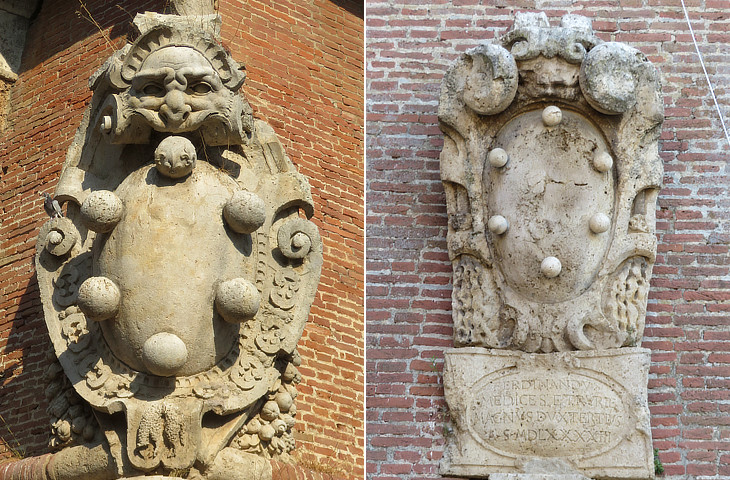 The Medici owed the conquest of Siena to the support of Emperor Charles V and his son King Philip II of Spain; both Cosimo in 1546 and Francesco I in 1585 were appointed Knights of the Golden Fleece, the highest chivalric order of the House of Habsburg. Their foreign policy was always supportive of the Spanish one. Ferdinand I made an attempt to detach himself from subservience to Spanish requests by establishing good relations with Henri IV of France: he granted him large loans, he promoted his conversion to Catholicism and in 1600 Henri married his niece Maria.
In the XVIIth century the Florentine textile industry experienced a rapid decline for the expansion of the Venetian one and for the effects of the Thirty Years's War which helped the development of the Dutch one. The Medici Grand Dukes turned their attention to agriculture and through various means they developed it. Even unhealthy Maremma was in part reclaimed by digging channels which drained the marshes.

The walls surround only a small area of the town which in the 1920s was developed north of them in the direction of the railway station.

Return to Grosseto - its ancient past.