Genzano
(a detail of G. Vasi's Grand View of Rome) (left) Medieval tower; (centre) coat of arms of the Cesarini inside Palazzo Cesarini; (right) coat of arms of Genzano above the entrance to SS. Trinità, a church built at the beginning of the XIXth century

The origin of Genzano is medieval; the town developed around a fortified site which included the church of S. Maria della Cima and which belonged to Abbazia delle Tre Fontane. According to Flavio Biondo, an Italian Renaissance humanist, the name of the town derives from Cynthia, an epithet of Artemis/Diana making reference to Mt. Cynthus at Delos, where the goddess was born (today this explanation is thought to be far-fetched).
In 1420 at the time of Pope Martin V Genzano became a fiefdom of the Colonna, the Pope's family. With some intervals Genzano remained a possession of the Colonna until 1563 when it was sold to the Massimi who in the following year sold it to the Cesarini, a family having close ties with the Colonna (including a column in their coat of arms). The coat of arms of Genzano shows a column (a reference to the Colonna/Cesarini) supporting a half-moon (a reference to Diana).

(left) 1664 engraving by G. Tomasini celebrating a visit to Genzano by Pope Alexander VII: S. Francesco is depicted in the left side of the engraving and Palazzo Cesarini in the upper part; (right) alley leading to S. Francesco

Genzano was renowned in the past for its tree-lined avenues called olmate (after olmo, elm), which were damaged during WWII. They were probably designed by Giovanni Antonio De Rossi, at the time a very young architect, in conjunction with the construction in 1637-1643 of S. Francesco, a Capuchin church, on the edge of the ridge surrounding Lake Nemi; the olmate linked the church to Via Appia and to Palazzo Cesarini. 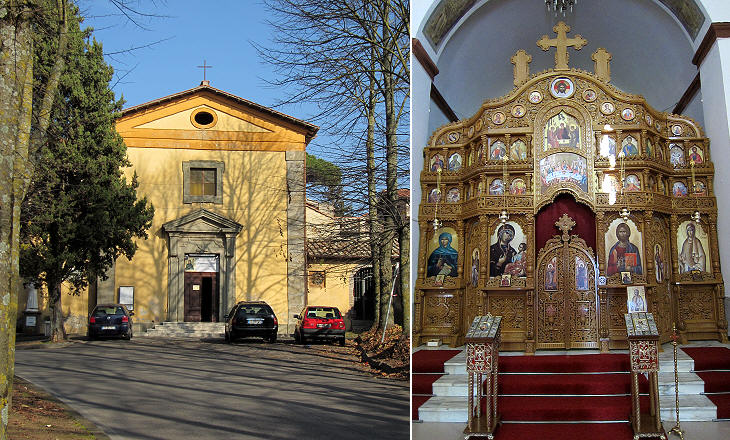 (left) S. Francesco; (right) interior (in recent years the church was assigned to the large Romanian Christian Orthodox community of Genzano; this explains the presence of an iconostasis, a decorated screen separating the altar from the nave)

It was customary for Capuchin churches to have a spartan aspect and to be built in a remote and possibly elevated location; they were often preceded by a path with the Stations of the Cross or with a large cross (see Chiesa dei Cappuccini in Rome which was built in the same period as S. Francesco). 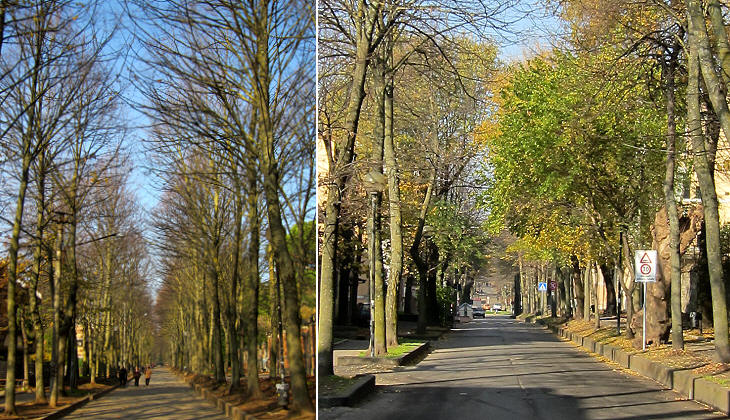 The other two remaining long avenues (in December 2011)

In the second half of the XVIIth century the Cesarini promoted the development of Genzano, which until then was limited to the area between Palazzo Cesarini and S. Maria della Cima. This led to the loss of the olmate which in the 1664 engraving are shown on the right side. 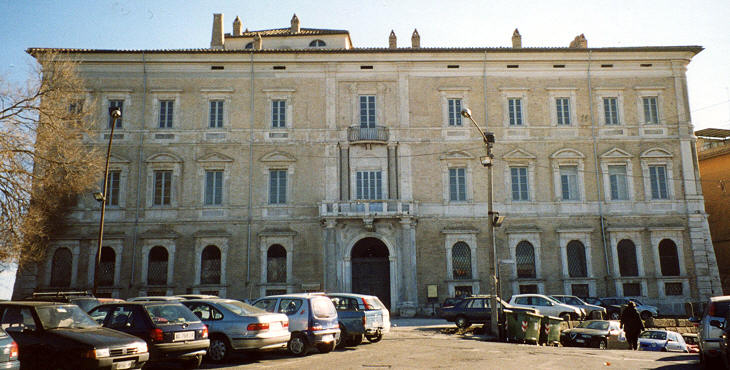 After having acquired Genzano the Cesarini set their residence in a sort of castle controlling the entrance to the town. Over time the building was enlarged until in 1713-1730 Duke Gaetano Sforza Cesarini entirely reshaped the family palace with the assistance of the architects Ludovico and Domenico Gregorini. The façade shows the use of some optical "tricks" which give the building a taller and larger appearance: the vertical elements become progressively thinner moving upwards, while the horizontal distance between the windows becomes smaller moving from the centre to the sides. 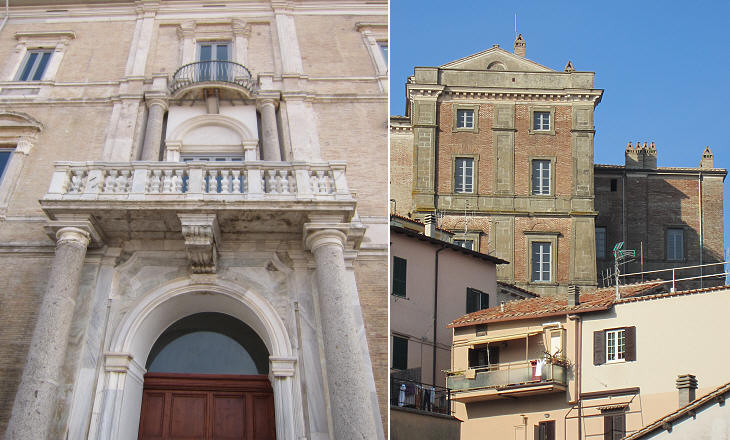 The portal and the balcony above it are perpendicular to the olmata leading to the palace; they were embellished with ancient granite columns and cipollino marble slabs.
The rear side of the palace was redesigned in the XIXth century. 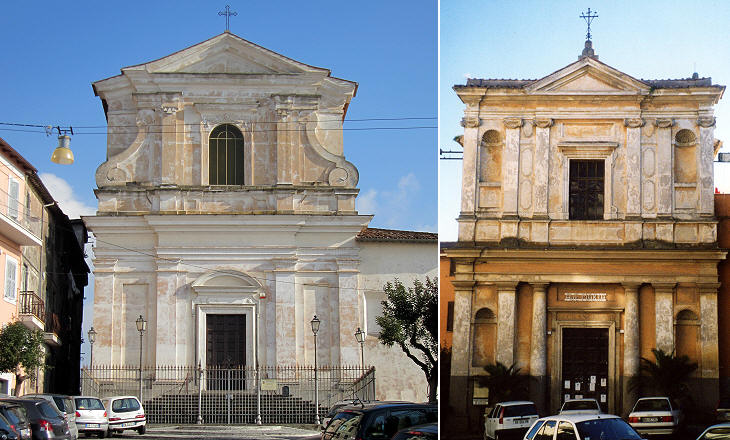 The old cathedral of Genzano is located at the top (It. cima) of the ridge surrounding the lake. A medieval church was most likely built upon a Roman temple overlooking the lake. The current building was given a different orientation (towards Via Appia) by Giovanni Antonio De Rossi who designed it in 1636.
SS. Annunziata is another historical church of Genzano which was part of an Augustinian monastery. Its façade was redesigned in 1786. 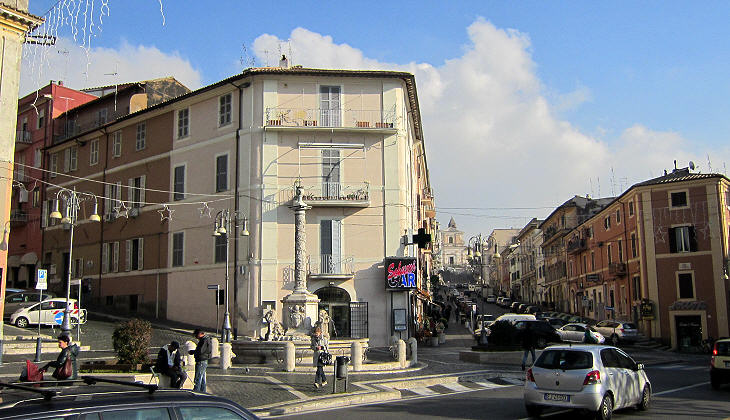 The development of Genzano followed the pattern of the Tridente of Piazza del Popolo where three streets depart from the same point (an obelisk in Rome and S. Sebastiano, a church which was eventually pulled down to allow the enlargement of Via Appia, at Genzano). The most important street led to S. Maria della Cima and it was named after Livia Cesarini, the last of the family who married Federico Sforza. It was a hurried and secret marriage; in 1664 at the age of 18 Livia entered a nunnery, but a few years later she decided she did not want to spend her life as a nun. Notwithstanding the opposition of some relatives and with the help of Cardinal Paluzzo Paluzzi Altieri, nephew of Pope Clement X, in 1673 Livia managed to leave the nunnery and to marry Federico Sforza who added the surname of his wife to his own. 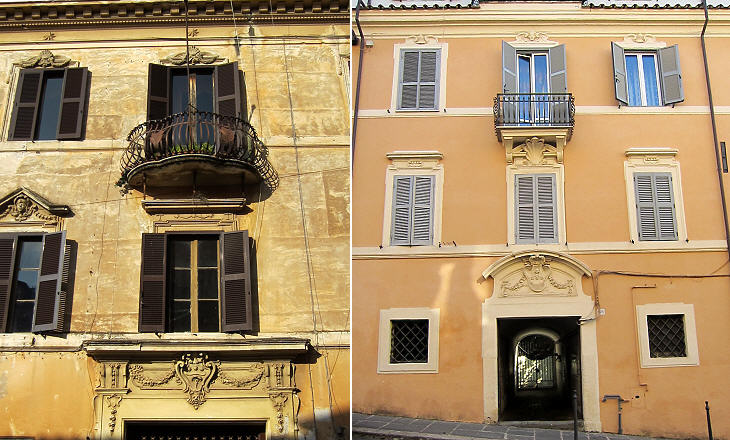 The second street (the third leads to the olmata of S. Francesco) was named after the Sforza. It has some elegant XVIIIth century buildings including the house of Giovanni Iacobini who superintended the construction of Genzano Nuova, as the new development was called. 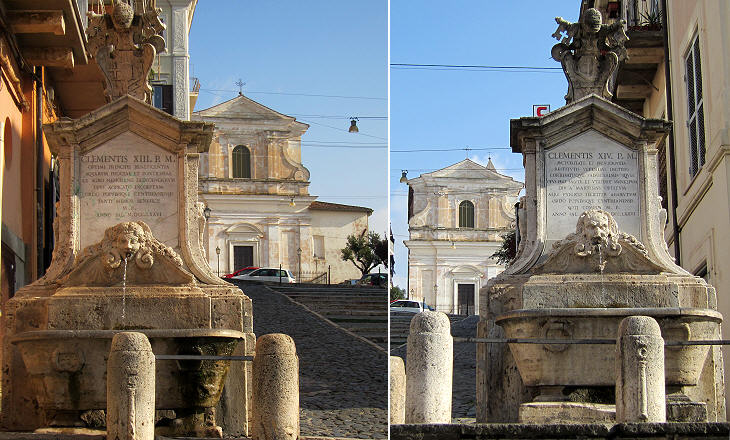 Twin fountains in Via Livia

The development of Genzano Nuova was hampered by the lack of water. This was available from nearby springs in the territory of Nemi which at the time belonged to the Frangipane. Requests were made to Pope Clement XIII and Pope Clement XIV to exert their influence over the Frangipane to allow the construction of aqueducts. These were completed in 1774-1778 and the help of the two popes was celebrated by Fontane Clementine, two identical fountains in Strada Livia. 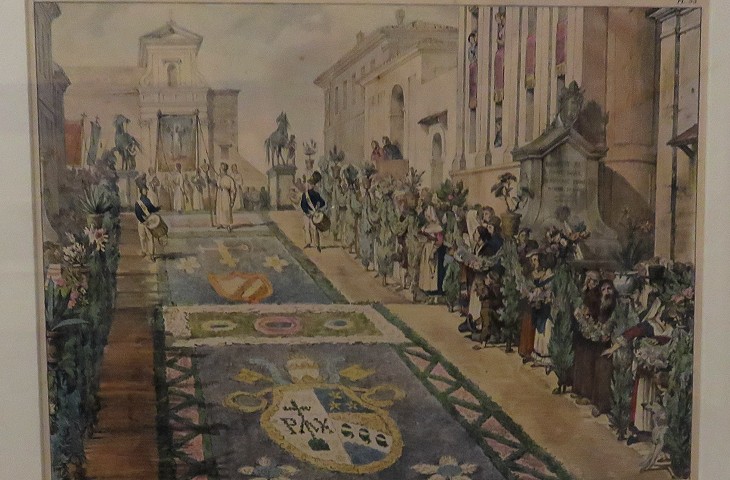 I want to tell you about a feast that took place over the past few days in Genzano, a small village not far from Rome. It is called the Infiorata. Just imagine: all the streets are strewn and adorned with flowers, but don't think that the flowers are simply scattered around. Not at all! You wouldn't even guess they are flowers: imagine some sort of carpets depicting a variety of things, and these all made of petals: baskets, vases, patterns and even a portrait of the Pope - simply extraordinary. The streets, the windows, the door frames were crowded with people. Letter by Nikolaj Gogol, a Russian novelist who spent many years in Rome. Translation by Alessandro Gallenzi. 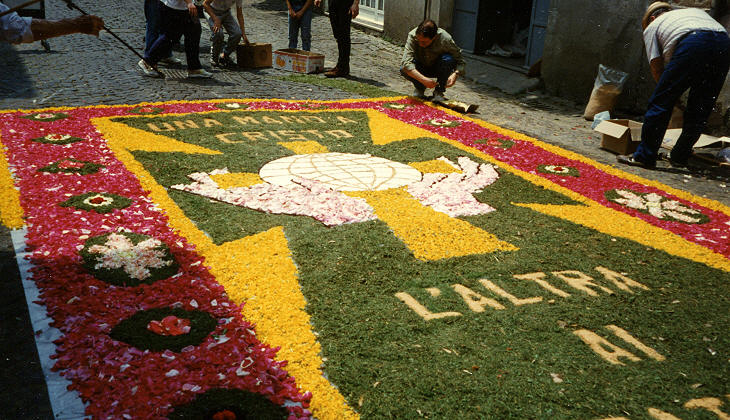 Preparations for the Infiorata at nearby Velletri

On the first Sunday after Corpus Domini Strada Livia is covered with petals of flowers to form a sort of tapestry. 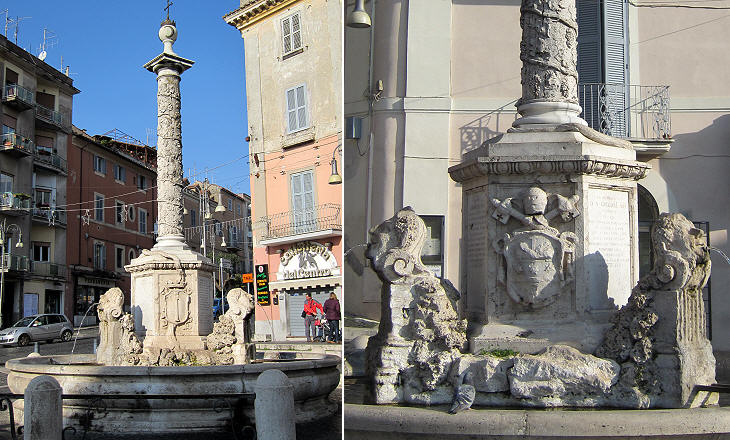 Today the starting point of the Tridente of Genzano is marked by a fountain with a tall column decorated with grape branches and thus called Fontana del Vino (Wine Fountain). It is a 1776 work by Virginio Bracci, son of Pietro Bracci, one of the most celebrated Roman sculptors of the first half of the XVIIIth century. Virginio Bracci designed Fontane Clementine too. For a fountain which actually pours wine see a page on Sagra dell'Uva at nearby Marino. 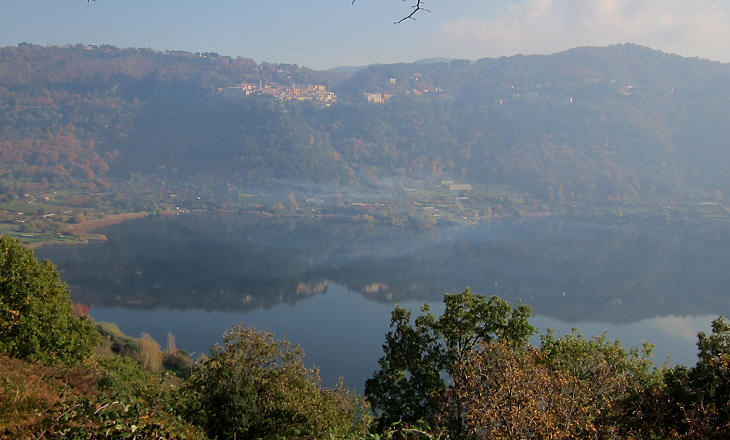 Next step in your tour of the Environs of Rome: Civita Lavinia (Lanuvio)