a "rione" with a very Roman heart
(it's always time for a glass of wine!)

On February 3, 1871 a law proclaimed Rome the new capital of the Kingdom of Italy. The court, the parliament and the associated bureaucracy moved to their new location in the course of that year. It was the start of a booming period for the real estate market. In 30 years the population grew from 244,484 inhabitants in 1871 to 462,783 in 1901.
The first town-plan (1871) suggested developing the area near the Stazione Termini, the main railway station: another area which experienced a large development was identified in the former meadows near Porta Castello. In the following years ministerial buildings, hotels, large apartment blocks, new squares and streets shaped that part of Rome afterwards called Roma Umbertina after King Umberto I under whose reign (1878-1900) the development took place.

All this building activity brought to Rome a large number of workers who could not afford to pay expensive rents and found accommodation for themselves and their families in makeshift hovels in scarcely populated areas within the walls of Rome.
At the beginning of the XXth century, after a period of social conflicts which had led to the assassination of King Umberto I, the government promoted the development of a plan to provide the working class with accommodation they could afford. This was done through Istituto Case Popolari (ICP), a public body. The Roman ICP was founded in 1903 and its first initiatives regarded Testaccio and San Saba. 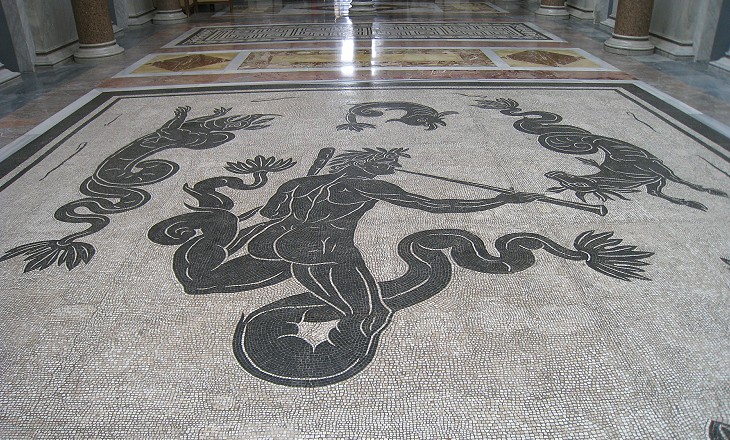 Roman Mosaic at Braccio Nuovo, a section of Musei Vaticani. It was found in the 1820s at Villa dei Numisii, between Via Ostiense and Via Ardeatina, not far from Garbatella

In addition to Testaccio and San Saba, the ICP identified a third site where it could acquire inexpensive areas to develop a Borgata Giardino, a sort of Italian version of the British Garden Cities. The chosen location for the new quarter was outside the section of the ancient walls between Porta S. Paolo and Porta S. Sebastiano, in a hilly area crossed by Via delle Sette Chiese (a reference to the seven basilicas visited by the pilgrims) which linked S. Paolo fuori le Mura to S. Sebastiano.

A small church for the few inhabitants of the nearby farms was the only building of historical interest. It was dedicated to St. Isidore, patron of the farmers, and to St. Eurosia, to whom farmers appealed when they feared hail would destroy their crops. At the beginning it was just a chapel belonging to the Paradisi family: in 1818 the chapel was replaced by a small church decorated with reliefs portraying St. Philip Neri and St. Charles Borromeo who both had revived the tradition of the pilgrimages to the seven basilicas of Rome.

Steps leading to the "gate" of the first development

On February 18, 1920 King Victor Emmanuel III laid the foundation stone of Borgata Giardino: the site chosen for the first block was near Via Ostiense where the inhabitants could find public transportation to go to work. There was only one access to the houses: in a way it reminded the inhabitants of the small walled towns near Rome from which they came.

A reminder of the polite innkeeper

The new housing development soon lost its pompous name of Borgata Giardino Concordia and became known by the much more appealing name of La Garbatella. Garbato is an Italian adjective meaning polite, amiable. The suffix ella adds to it a bit of gracefulness and a female reference. The general opinion is that the name made reference to an innkeeper who provided refreshments to the pilgrims and bread and wine to the workers who built the site.
During the Fascist period there was an attempt to impose the more historical name of Remuria, a reminder of Remus, brother of Romulus, the founder of Rome, but La Garbatella's left-leaning inhabitants boycotted the change.

La Garbatella was developed by blocks (Italian Lotto, see the image used as background for this page) which were designed by different architects over a period of approximately twenty years: this produced a great variety of styles and decorations, with many details reminding the viewer of medieval, Renaissance or Baroque patterns. The inhabitants did not find in the new quarter the alien landscape of so many modern urban developments, but the familiar mixture of styles existing in so many streets of Rome and they easily felt at home in their new houses.

Even when the block was made up of large buildings, architects chose a varied design which refrained from the uniform surfaces which a few years later characterized EUR.

An ancient Roman statue found on the site; a sort of modern gargoyle; Carlotta's fountain

When La Garbatella was developed private motorization was yet to come (at least for the working class), so only a few large streets were planned for a tramway line to go round the new quarter. Winding streets, steps, old statues and jars all contributed to the inhabitants' feeling that they were living in a town district where others had lived before them.

In the 1930s several large buildings were erected in La Garbatella to provide the services required by its increased population. Casa dei Bambini was built on the site of a suburban villa and it retains the façade of the old casino of the villa. A large parish church was dedicated to St. Francis Xavier in 1951.

Albergo Rosso, a rather peculiar building with a design which reminds the viewer of Borromini's Torre dell'Orologio, provided accommodation to bachelors who were not entitled to an apartment. It was converted into flats after WWII. A more pompous design characterized the primary schools of La Garbatella.

Innocenzo Sabbatini was the best known architect among those who took part in the development of La Garbatella: also the theatre he designed shows a combination of concave and convex lines which reminds the viewer of Borromini.

The inhabitants of La Garbatella have clearly defined political opinions: due to their working class origin they support leftist parties. They also have a clear preference for A. S. Roma, one of the two soccer teams of Rome (the other one is S. S. Lazio). This team won the 2001 Italian championship and the event was celebrated by painting a sort of local Mount Rushmore mural portraying four key players. 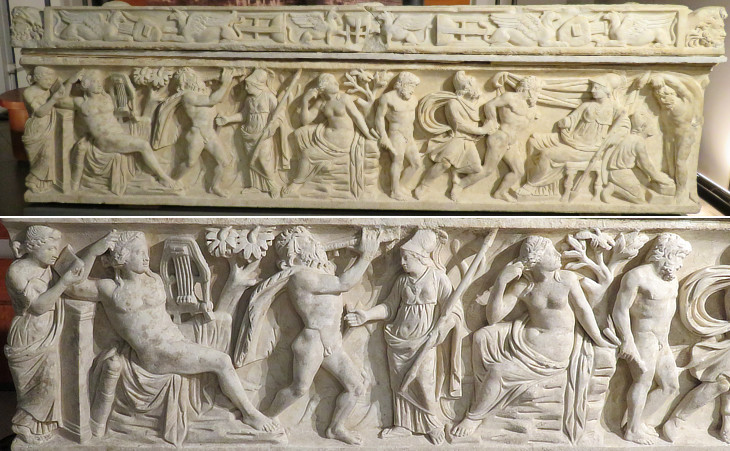 Centrale Montemartini:(above) sarcophagus which was found in 1935 in Via della Garbatella (ca 160 AD); (below) detail showing: a) a Muse and Minerva watching the contest between Apollo and Marsyas; b) another Muse watching a demoralized Marsyas (see a list of sarcophagi which were found in Rome) 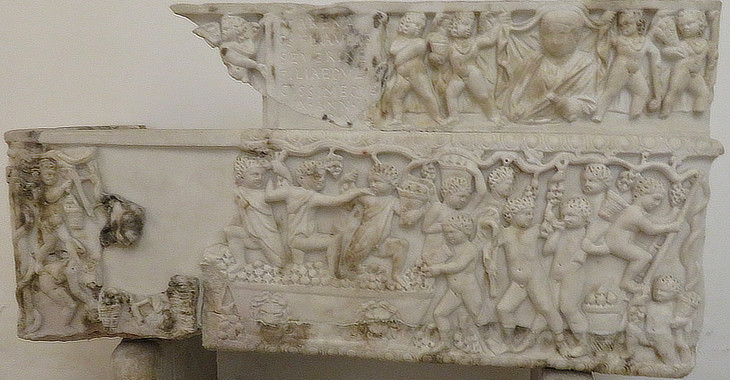 Musei Capitolini: sarcophagus of Quinta Flavia Severina, a child of three, which was found in Via Gerolamo Benzoni in 1938 (IIIrd century AD); it is embellished with scenes of wine making