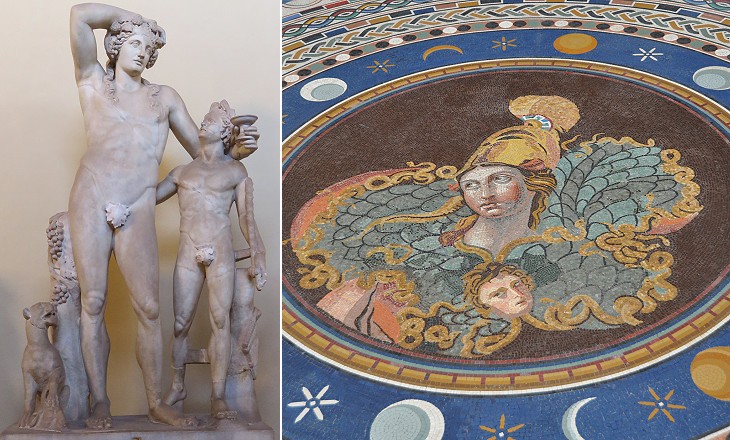 Musei Vaticani: (left) Dionysus and a young satyr, which was found at Casal Morena, near Frascati (IInd century AD); similar to the Ludovisi Dionysus, it was greatly restored with the addition of missing parts; (right) floor mosaic portraying Minerva in an astronomical context; it was found at Villa La Rufinella in 1741 and it now embellishes Sala della Croce Greca

Some of the finest ancient works of art which were found at Frascati and its environs were moved to the museums of Rome. The mosaic of Minerva was one of the first to be detached from its original location. This occurred in 1776 when the technique for properly removing mosaics was not yet fully developed and parts of it were damaged. It was restored and missing parts were added. It is dated Ist century BC and it embellished a hall of a Roman villa. We paid a visit to the Villa Rufinella (..) the lawn in front and the portico contained many works in marble, more or less dilapidated, which had been found in the neighborhood, and not deemed worthy of being transferred to a more ambitious museum.
George Stillman Hillard - Six Months in Italy in 1847-1848
In 1903 at the initiative of local citizens a small collection of antiquities was gathered in the premises of the Town Hall. Over time it was enriched by donations and new findings. Eventually it was decided to move it to a separate location and the choice fell on the former XVIIth century stables of Villa Aldobrandini. In 2000 the new museum was inaugurated. A section of it houses temporary exhibitions of contemporary artists. In 1994 the Spanish School of History and Archaeology in Rome began the first of a long series of excavations campaigns on the site of ancient Tusculum which continue to the present day. They found a series of pedestals with the names of mythic and historic characters, chiefly magistrates of the Roman Republic. That of Cn. Domitius Ahenobarbus (Red-Bearded) at first sight calls to mind Emperor Nero (Lucius Domitius Ahenobarbus), but it refers to a 122 BC Roman consul who was given the title of imperator for his victories in Gaul where he founded the colony of Narbo Martius (Narbonne).
The pedestal of Avidia was found in 2019 in the Forum of the ancient town and it is dated between 119 and 144 AD. Its inscription testifies to family bonds between the Avidii and the Statilii; both families were part of the inner circles of Emperors Trajan and Hadrian. 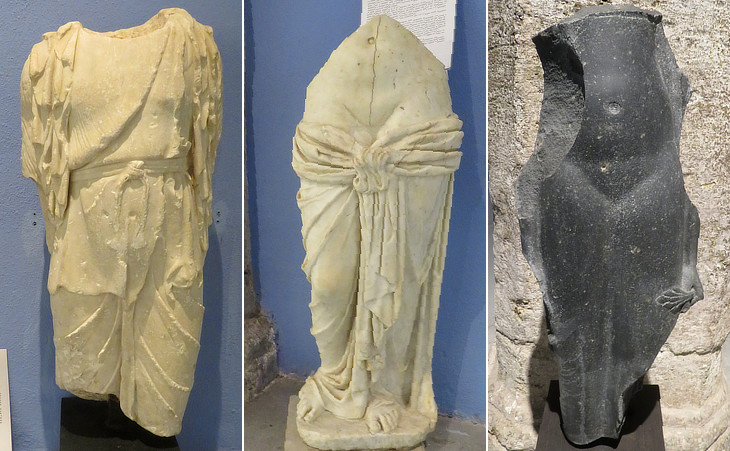 Fragments of statues which were found in the environs of Frascati: (left) archaic Dionysus; (centre) Venus; (right) an Egyptian goddess (basalt)

The collection of statues at the museum is rather limited, yet it is representative in style, subjects and materials of the statues which were found in great numbers in some Roman villas, e.g. Villa Adriana and Villa dei Papiri at Herculaneum. 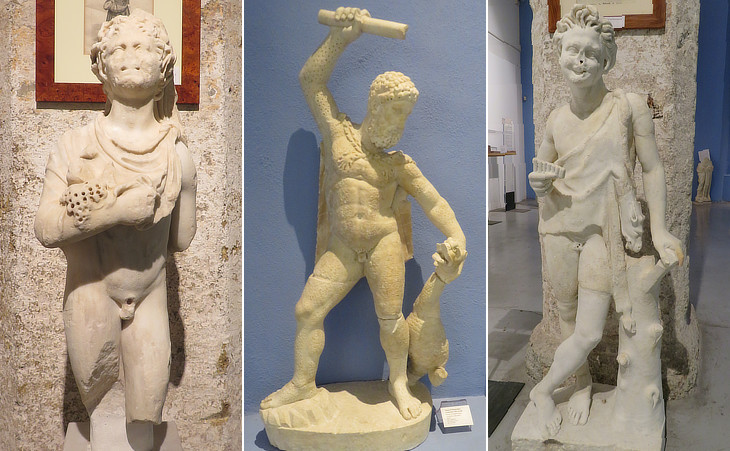 Some of the exhibits of the museum, e.g. the Autumn and the young satyr, were discovered by tombaroli (grave robbers) who tried to sell their findings to unscrupulous antique dealers, but were detected by Italian authorities. Occasionally this has occurred also for monuments of some size, e.g. a finely decorated funerary monument near Lucus Feroniae. Funerary statues of the Republican period

The activity of Italian authorities led to blocking the sale of a total of five life-size statues which are dated Ist century BC. They decorated tombs and the three on the back most likely belonged to the same family tomb. Unfortunately the circumstances in which they were found did not provide elements for the identification of the location of the tomb and of the names of the dead. 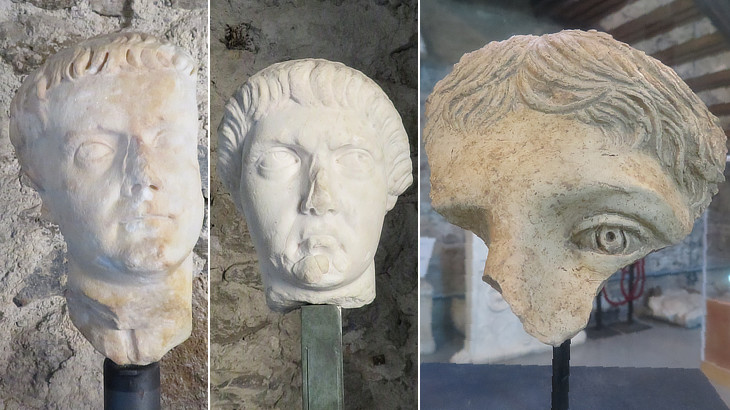 Emperors: (left) Tiberius; (centre) a rather rare portrait of Constantine which was sculptured in an older head; (right) a young member of the Julio-Claudian dynasty (terracotta)

The evidence of a Roman villa was recently identified at Cocciano, at the foot of Villa Mondragone. Archaeological work is still to be completed but it is likely it belonged to Emperor Tiberius, because the head of a statue of him was found there. You may wish to see the amazing villa the Emperor had at Sperlonga. The sarcophagus shown above is an example of a popular pattern (see a similar one in a page covering this topic): the dead was portrayed in a small clipeus (round shield) at the centre of the box which was decorated with a motif based on strigilis, a double curved tool athletes used to scrape oil or sweat from the skin. The end of the box had reliefs having a protective purpose: a winged genius and a Good Shepherd. The latter became a feature of Christian iconography (see a mosaic at Ravenna).
The lenos (tub-shaped) sarcophagus below is typical of the late Empire (see a similar one which was found along Via Latina). Its pattern characterized the first monumental Christian sarcophagi (see examples in Rome, France and Spain). 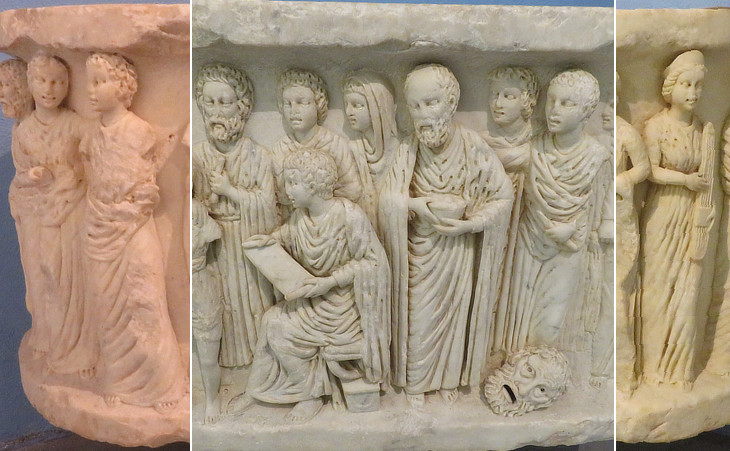 Details of the sarcophagus: (left) a young couple re-enacting their marriage; (centre) a pedagogist and members of the family watching towards the dead, one of them carries a bowl of eggs; (right) Calliope or Euterpe with a large syrinx or a barbiton (a string instrument)

The sarcophagus illustrates the growing reliance of Roman sculptors on the drill. Its use was not a novelty, but in classical works the final surface was smooth without traces of the tools which had been employed. The use of the drill for visual effects on sarcophagi began in the IInd century AD and by the next century drill grooves, channels, and isolated holes appeared on most of the carved surface, especially in depicting the face and hair of figures. The use of drill achieved spectacular effects in some Byzantine capitals. 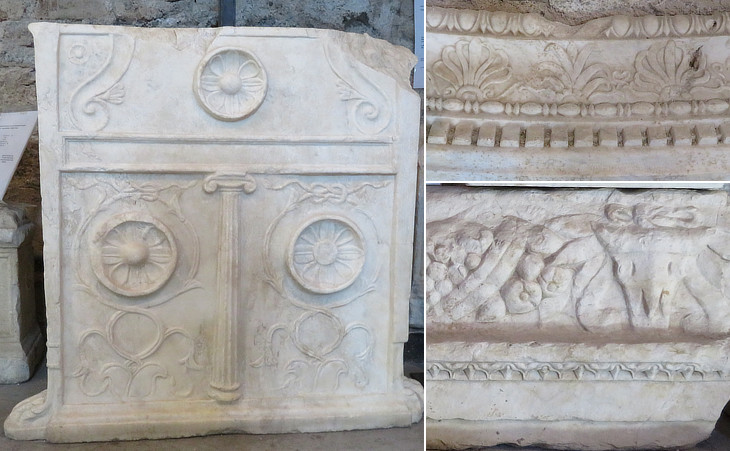 Usually the small tables stood on three or four legs ending with lion paws (e.g. in the House of Casca Longus at Pompeii), but in some instances they were supported by two panels e.g. at Herculaneum. The decoration pattern of large round flowers can be noticed also on some Etruscan sarcophagi.
Joseph Forsyth in Remarks on Antiquities, Arts, and Letters in Italy in 1802-1803 wrote that he was shown a trapezophoron by the monks of the Abbey of Grottaferrata who claimed it had belonged to Cicero. 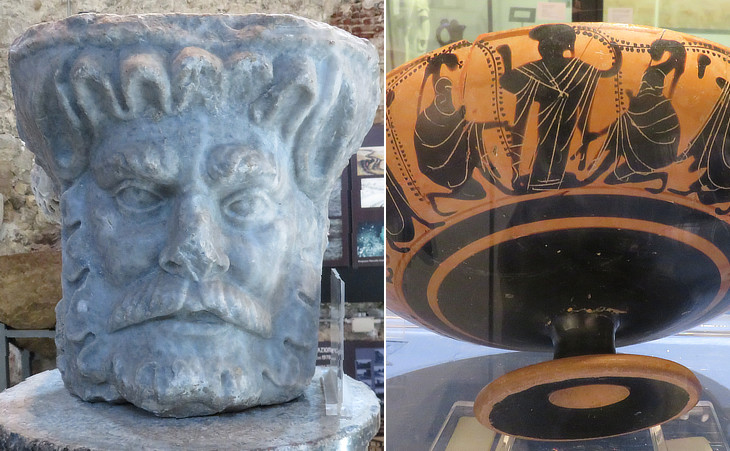 (left) Capital which was reworked in order to portray a barbarian with donkey ears (Vth century AD), another exhibit which was recovered from grave robbers; (right) kylix, a wine-drinking cup; the image used as background for this page shows a terracotta decoration with the face of a Gorgon

The museum houses a great variety of exhibits, unfortunately of many of them we do not know the exact location where they were found so that it is not possible to determine their origin and purpose. The museum houses also some medieval exhibits which are rather intriguing.

Coat of arms of Cardinal Guillaume d'Estouteville; it was carved on an ancient marble, the back of which had been incised with a betting game which can be noticed in many parts of the Roman Empire, e.g. at Jerusalem, in Jordan and in Istria

Return to the Town of Frascati
or move to page two: Villa Mondragone, Villa Taverna, Villa Aldobrandini and Villa Torlonia
or to page three: Villa Lancellotti, Villa Falconieri and other villas
Next step in your tour of the Environs of Rome: Grottaferrata