The Silk Road is the name given to the itineraries followed by caravans and ships to carry silk and other merchandise from the Far East to Europe. Trade was not the only driving force behind the development of routes. Faith too had a great impact in promoting communication between the various European countries after the fall of the Roman Empire. A famous Pilgrims' Way led to the Spanish shrine of Santiago de Compostela (you may wish to see Saint-Sernin de Toulouse, a church on that route). Pilgrims' Way is also the name of a track between London and Folkestone passing through Canterbury.

German Map of Italy showing in red Via Francigena: the red dots indicate the towns along Via Francigena covered in this section. The map shows Italy as it was partitioned in 1864 and the detail highlights the border between the Papal State (lilac) and the Kingdom of Italy (blue)

Pilgrimages to Jerusalem were supported by logistics mainly provided by Venetian ships and trading posts. With the first Jubilee declared in 1300 by Pope Boniface VIII, Rome replaced Jerusalem (which was no longer easily reachable after the fall of the short-lived Christian kingdoms in the Levant) as the most important religious destination.

Pilgrims coming from France usually crossed the Alps at the Great Saint Bernard and Mont Cenis passes. They then moved through the Po Valley stopping at Aosta (or Turin), Pavia, Piacenza. Next they crossed the Apennines at the Cisa Pass. Once in Tuscany they avoided the unhealthy route along the sea and reached Rome via Lucca, Siena and Viterbo. The road was called Via Francigena as it originated in France. The section between Siena and Rome followed Via Cassia, the ancient Roman road which ended at Ponte Milvio.

Via Cassia has been modified at several points to adapt it to modern traffic needs. In general the ancient Romans had a liking for straight roads even though that meant very steep gradients: these have been modified to more winding roads. The municipalities of the towns of Acquapendente and Bolsena (located at the border between Latium and Tuscany) have restored (for pedestrians only) the old Via Cassia where it diverges from the current one. Via Francigena walks have become very popular among the residents and the many foreigners who visit the area. 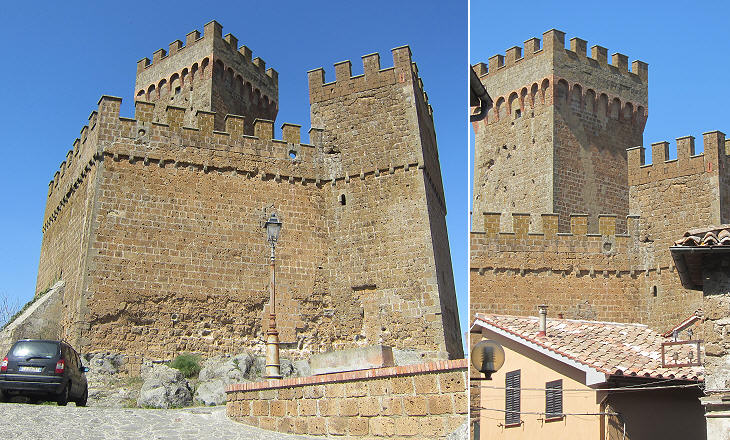 The border between the Papal State and the Grand Duchy of Tuscany along Via Cassia was established in 1624 when the County of Santa Fiora (a small town in Tuscany) was partitioned between the two states. Proceno, a small settlement on a hill to the west of Via Cassia was included in the Papal State. The County of Santa Fiora was the last remnant of a sort of independent state established by the Aldobrandeschi family in the XIth century and which for some time included Toscanella (Tuscania) in northern Latium. 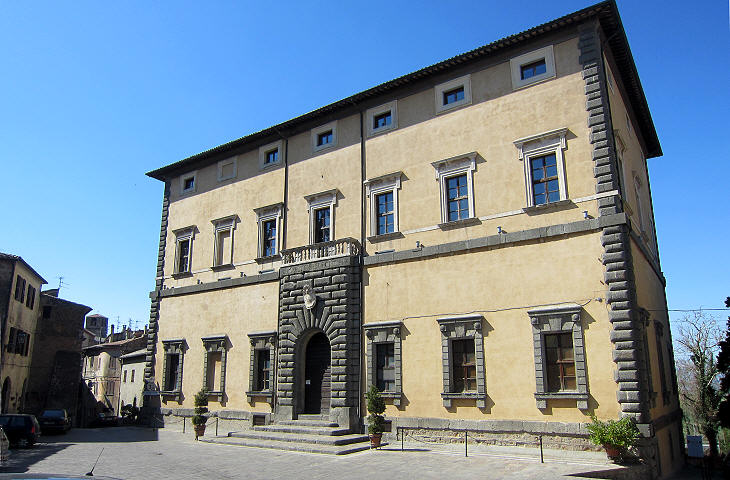 In 1439 the County of Santa Fiora was inherited by the Sforza, a powerful family from Milan. When the fortunes of the family in Northern Italy declined, the Sforza branch of Santa Fiora established family ties with the Farnese, a family owning several fiefdoms in northern Latium. Bosio II Sforza married Costanza Farnese, natural daughter of Cardinal Alessandro Farnese seniore who in 1534 was elected Pope Paul III. One of the first decisions of the Pope was to appoint his sixteen-year-old grandson Guido Ascanio Sforza cardinal (he was already bishop of Montefiascone and Corneto (Tarquinia) from the age of ten). 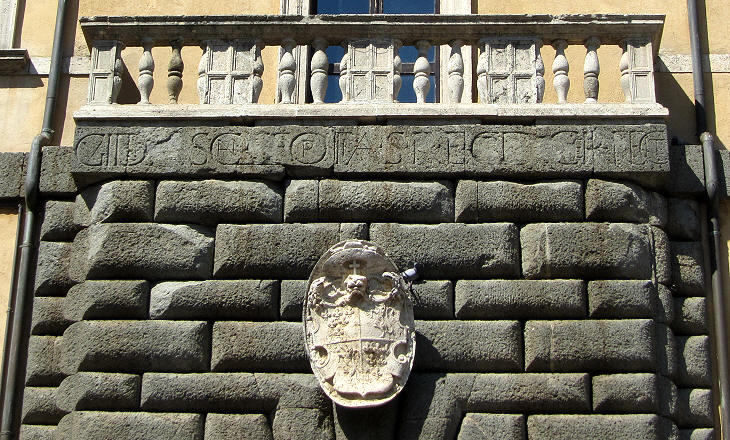 In 1550 Cardinal Guido Ascanio Sforza decided to build a grand palace in otherwise lacklustre Proceno. There is no documented evidence of the architect who designed the palace, although the portal is thought to have been built on the basis of a sketch by Antonio da Sangallo. Cardinal Sforza had in mind to utilize the palace as a venue for hosting guests, but he probably did not have many opportunities to do so. In 1555 he was briefly imprisoned by Pope Paul IV who accused him of supporting the Spaniards with whom the Pope was at war. Proceno in addition was too remote from Rome and the palace was not equipped with gardens and fountains as other residences of the Farnese, such as Caprarola. 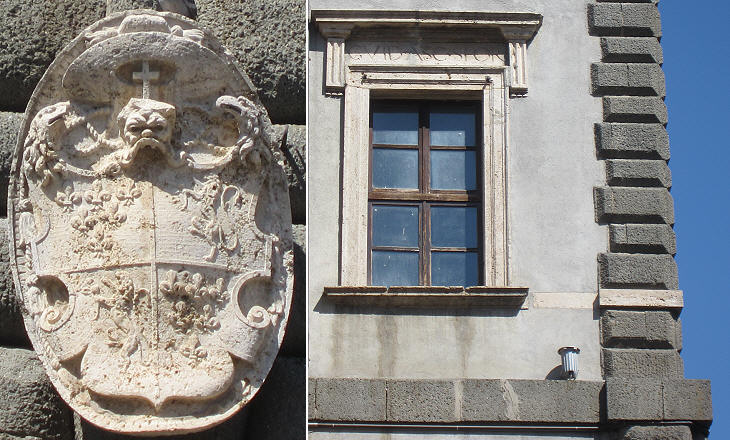 Palazzo Sforza: (left) coat of arms showing the rampant lion holding a quince branch of the Sforza di Santa Fiora and the fleurs-de-lys of the Farnese; (right) window with the inscription Guido Ascanio Sforza

The heirs of Cardinal Sforza were not interested in the palace of Proceno which was eventually bought and resold several times. An earthquake in 1919 and long years of abandonment damaged the building and caused the collapse of sections of its rear part. It was eventually acquired by the Town of Proceno and brought back to its pristine aspect. The Santa Fiora had a palace in Rome which they sold to the Barberini, the family of Pope Urban VIII, in 1625. It still retains some halls with their heraldic symbols. In 1596 Caterina Nobili, a niece of Pope Julius III and the widow of Sforza I Sforza, Count of Santa Fiora, promoted the construction of the monastery and church of S. Bernardo alle Terme. 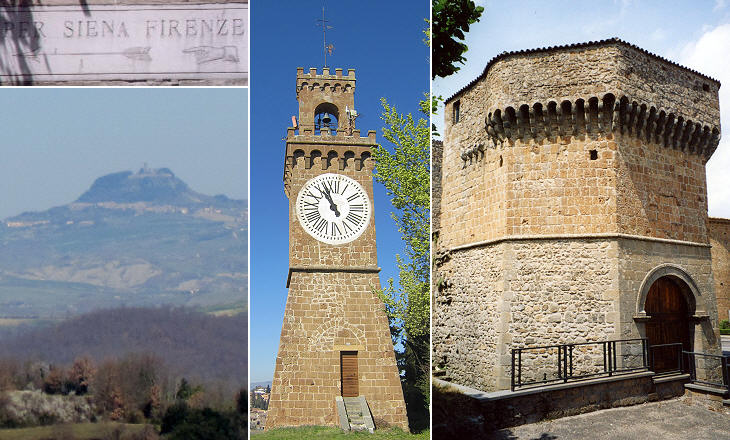 In January 1845 Charles Dickens travelled to Rome along Via Cassia; in Pictures from Italy he gave an account of his arrival to Acquapendente. It was a bad morning when we left Monte Pulciano; and we went, for twelve miles, over a country as barren, as stony, and as wild, as Cornwall in England, until we came to Radicofani, where there is a ghostly, goblin inn: once a hunting-seat, belonging to the Dukes of Tuscany. It is full of such rambling corridors, and gaunt rooms, that all the murdering and phantom tales that ever were written might have originated in that one house. (..) When we got to the mountain pass, which lies beyond this place, the wind (as they had forewarned us at the inn) was so terrific, that we were obliged to take my other half out of the carriage, lest she should be blown over, carriage and all, and to hang to it, on the windy side (as well as we could for laughing), to prevent its going, Heaven knows where. For mere force of wind, this land-storm might have competed with an Atlantic gale, and had a reasonable chance of coming off victorious. (..) There was snow, and hail, and rain, and lightning, and thunder; and there were rolling mists, travelling with incredible velocity. It was dark, awful, and solitary to the last degree; there were mountains above mountains, veiled in angry clouds; and there was such a wrathful, rapid, violent, tumultuous hurry, everywhere, as rendered the scene unspeakably exciting and grand. It was a relief to get out of it, notwithstanding; and to cross even the dismal dirty Papal Frontier (after which we arrived at Acquapendente).
Radicofani Pass was known as a dangerous place because brigands took advantage of its remoteness from towns to assault pilgrims on their route to Rome. 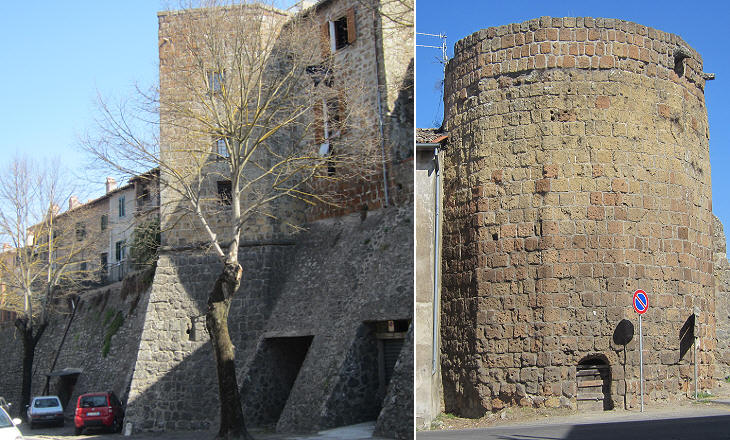 Acquapendente (Leaning/Falling Water) is named after a small stream which flows down a hillside. In 1166 the castle which stood at the top of the hill was destroyed, with the exception of a tower, when the inhabitants of the town ousted the representatives of Emperor Frederick Barbarossa.
Porta S. Sepolcro, the entrance to the town from Rome, was located inside a tower which is the only remnant of the southern walls. In the XIIIth century Acquapendente expanded beyond the stream which came down the hillside. The walls built to protect the enlarged town were in part modified to upgrade them to the requirements of cannon warfare. The town was for some time a possession of Siena, although formally it had been bequeathed to the Church by Countess Matilde of Tuscany in the XIth century. 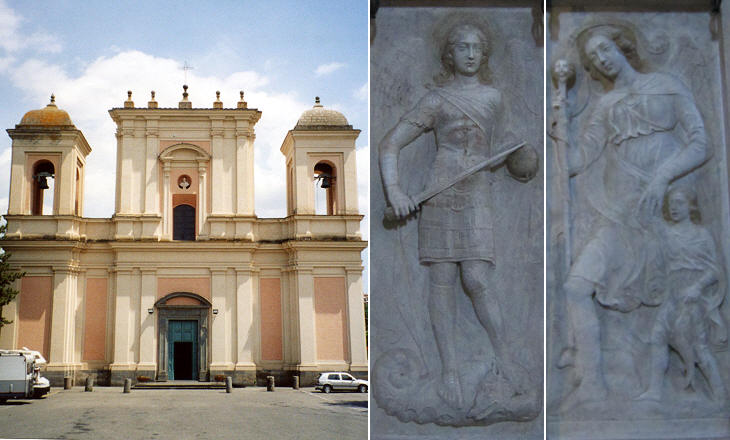 The fortunes of Acquapendente took a favourable turn in 1649 when Pope Innocent X put an end to the Duchy of Castro which was ruled by the Farnese. His army destroyed Castro, the capital of the small state, and the Pope transferred the seat of the Bishop of Castro to Acquapendente. This decision was motivated on religious grounds, because S. Sepolcro housed some stones marked with the blood of Jesus Christ, which came from Jerusalem. This explains why the church was embellished with important works of art prior to becoming a cathedral.
Pope Innocent X sent a bust of himself by Alessandro Algardi to Acquapendente. In the XVIIIth century, when the façade of the cathedral was redesigned, the bust was placed above the main window (today the original is kept in the Bishop's Palace). 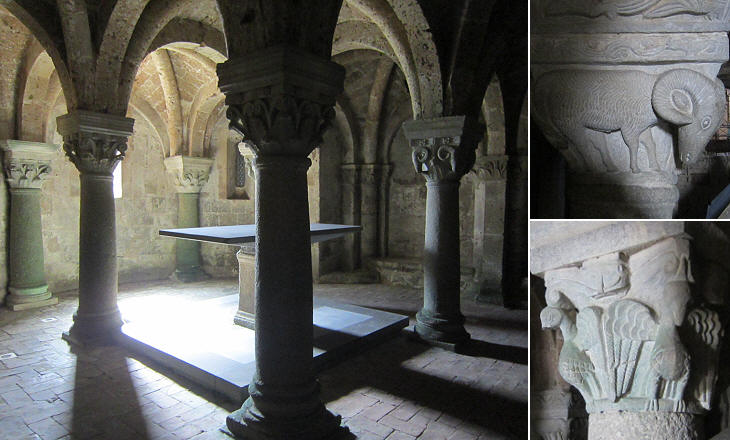 The three apses of S. Spirito rest on a very large crypt containing the relics. The columns and the capitals are dated Xth century, whereas the Gothic vaults are thought to have been built towards the end of the following century. Similar zoomorphic capitals can be seen at S. Andrea in Montefiascone. 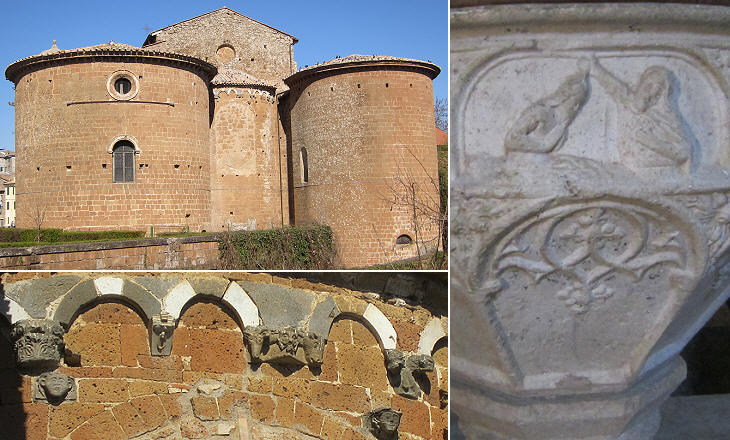 Because of the relics pilgrims stopped at Acquapendente to pray at S. Sepolcro and it is thought that the Templar Knights had a house near the church. Today members of the Order of the Holy Sepulchre in Northern Latium, Tuscany and Umbria often gather at Acquapendente. The headquarters of the Order are located at former Palazzo dei Penitenzieri in Rome. 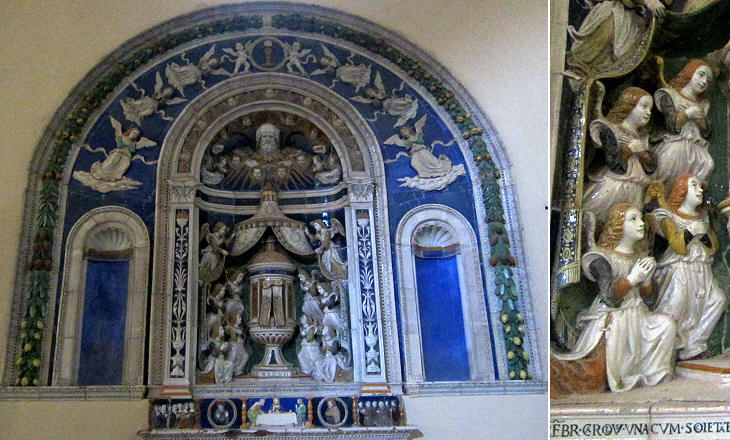 Glazed terracotta by Iacopo Beneventano (1522) and a detail

In 1881 an elaborate terracotta altar which decorated another church of Acquapendente was relocated to the transept of S. Sepolcro. Glazed terracottas are typical of Tuscan Renaissance, but fine examples of them can be found in Northern Latium and in particular at Bolsena and S. Maria della Querce. Because of an inscription we know it was made by Iacopo Beneventano, an artist otherwise unknown. The image used as background for this page shows another detail of this terracotta. 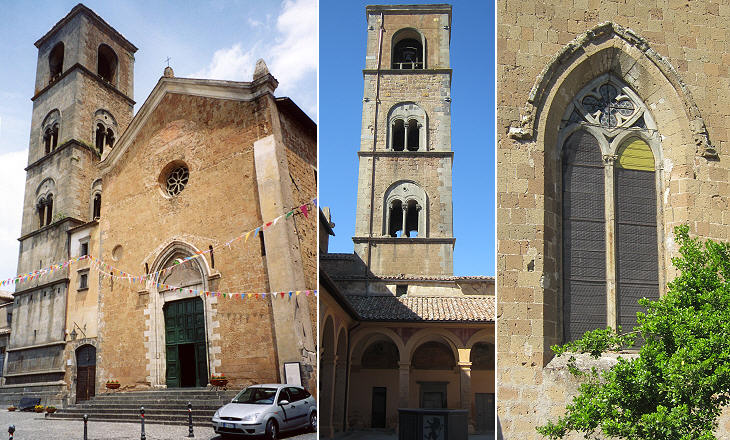 S. Francesco, its bell tower and its rear window

S. Francesco was built in the XIIth century and it was dedicated to Mary. In 1253 it was assigned to the Franciscan Order and the dedication was changed. The bell tower was added in 1506 and probably at the same time a large cloister was built to the left side of the church. A hospital which retained the dedication to Mary stood opposite the church and it provided assistance to the pilgrims who arrived at Acquapendente in poor health or just exhausted from the journey. The interior and the cloister of S. Francesco house works of art of different periods, including an interesting example of XVIIth century utilization of a wooden crucifix, which can also be seen at Lanuvio. 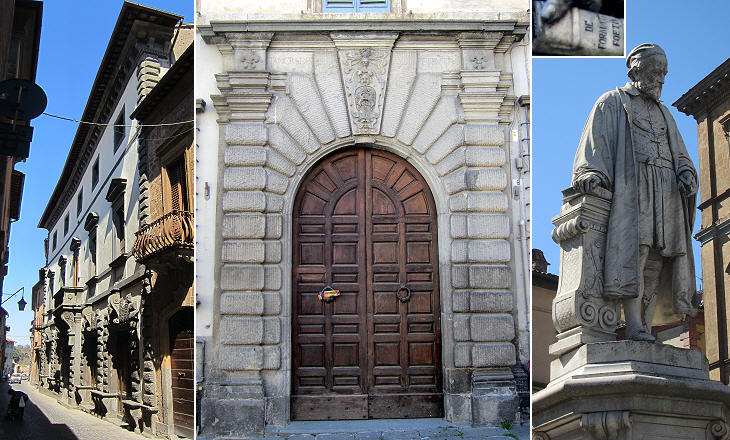 (left) Palazzo Viscontini; (centre) portal of Palazzo Petrucci Piccioni (XVIIIth century); (right) monument to Girolamo Fabrizio and in the inset "De Formato Foetu" (On the Formation of the Fetus) his best known work written in 1600

The influence of Tuscan artists is evident in the bugnato decoration of Palazzo Viscontini, a fine Renaissance palace, and in the portal of Palazzo Petrucci Piccioni.
In most of the main squares of Italian towns there is a statue dedicated either to King Victor Emmanuel II or to Giuseppe Garibaldi, who both played a key role in the making of Italy in the XIXth century. Acquapendente is an exception, because in 1888 the municipality chose to celebrate Girolamo Fabrici or Fabrizio with a monument in the main square. He was born in Acquapendente in 1535 and he is best known for his studies on the development of foeti, on the functioning of vein valves and for his anatomical descriptions.

A Pilgrims' Way - Via Francigena - next pages:
Bolsena
Montefiascone