In the XVIIth century the growth of the population of Rome and in particular the growth of the numbers of lawyers, architects and merchants led to the development of a new type of town building aimed at providing a suitable accommodation to the members of this emerging class, who could not afford to live in their own palazzetto, but who wanted to leave the old medieval small houses of the popolino (lower classes). The palazzo da appartamenti (building split into flats to be rented) provided an attractive income and the richest families, worried by the dwindling yields of their rural properties, financed the development of this new kind of building or the renovation of their own palaces to obtain some flats, which would ensure a regular income. In 1642 Gian Lorenzo Bernini was a forerunner of this tendency, as he invested the money he had earned by being the favourite architect of Pope Urban VIII, in a block of flats near Collegio di Propaganda Fide. 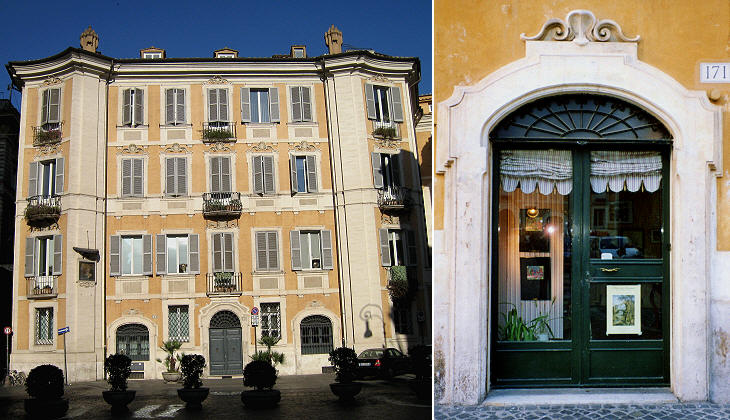 The majority of the blocks of flats were built in the first half of the XVIIIth century when an additional request for flats came from the foreigners who spent some months in Rome to complete their education. The richest ones rented a flat, but also the less affluent ones contributed to the real estate market as they rented a room in a flat used as a boarding-house (pensione). One of the finest examples of this new kind of building is the group of houses designed by Filippo Raguzzini in 1727 in Piazza S. Ignazio. The high number of windows is an indication of a reduced size of the rooms and of the lack of a large inner courtyard. The value of the property was increased by shops.
The tenants shared the views of the upper classes about the importance of the decoro (dignity) of the house where they lived. Charles de Brosses, a French traveller who lived in Rome for some time in 1739, gave a vivid account of the differences between the French and the Italian concepts of luxury: "We often say that the Italians are stingy and mean, that they do not know how to spend their money, how to gain a reputation by using their wealth,... that only the French have a sumptuous table, luxury carriages, furniture, jewels, fine dresses, etc.. I had often the opportunity to compare the different approaches to pomp and splendour in the two countries and to say it bluntly I do believe the Italian one is richer, nobler, nicer, more useful, more splendid and more conscious of its greatness." He goes on to say that the French devote all their efforts to laying down lavish banquets, while the Italians prefer to please their eyes by building fine houses and monuments. "A finely fluted column is preferable to a finely cooked pullet. After having seen the column, one goes back to see it again: it is a perpetual invitation, for today and tomorrow and all are invited." He then quotes the Italian opinion about spending a lot of money on banquets "che tutto se ne va al cacatojo" (it all goes into the lavatory). This explains why also these buildings had a complex design with a rich decoration. To reduce its cost many architects copied Francesco Borromini, who unlike Gian Lorenzo Bernini, never (or to a limited extent) used marbles or other expensive stones. His masterpieces were based on a sophisticated design made of curved lines and on stucco decorations. These XVIIIth century buildings are called Barocchetto (little/fine Barocco) to indicate that they spread into more ordinary buildings the inventions of the great Baroque artists of the previous century. 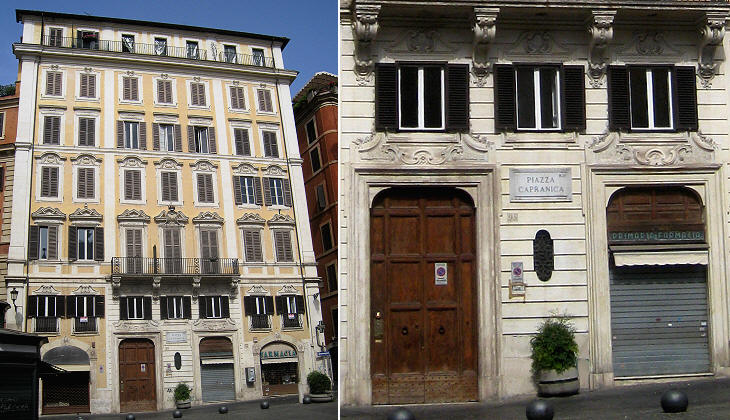 The limited number of tenants increased the value of the flats, as it increased their privacy; for this reason several buildings have two entrances leading to separate steps in the same space in the middle of the building, as in Casa Giannini designed in 1744 by Alessandro Dori. 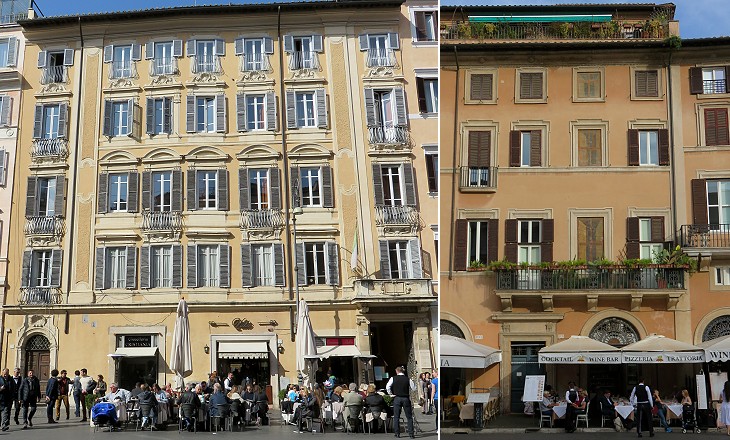 Houses in Piazza in Lucina (left) and in Piazza Navona (right)

The areas most interested in this urban development were the quarters between Fontana di Trevi and Piazza Navona. The building in Piazza in Lucina, designed in 1729 by Camillo Paladini, has two entrances (the one to right was modified in the XIXth century) and a rhythm of windows, which does not comply with the traditional equidistant approach, in order to give priority to the needs of the occupants. The building in Piazza Navona shows some fake windows aimed at complying with the tradition, without forcing the actual allocation of the internal spaces.

An important factor in establishing the rent was the availability of a direct provision of water, usually in the form of a fountain in the courtyard. Paolo Antonio Ameli built in 1741-1744 a very large addition to Palazzo Doria Pamphilj al Collegio Romano which was split into flats. The frame of the fountain in the courtyard is huge, but it allows for the opening of windows and doors. Rooms for servants or lower cost apartments were made out in the roof. The decoration, in the lack of heraldic symbols, was based on generic subjects, such as wreaths or shells. 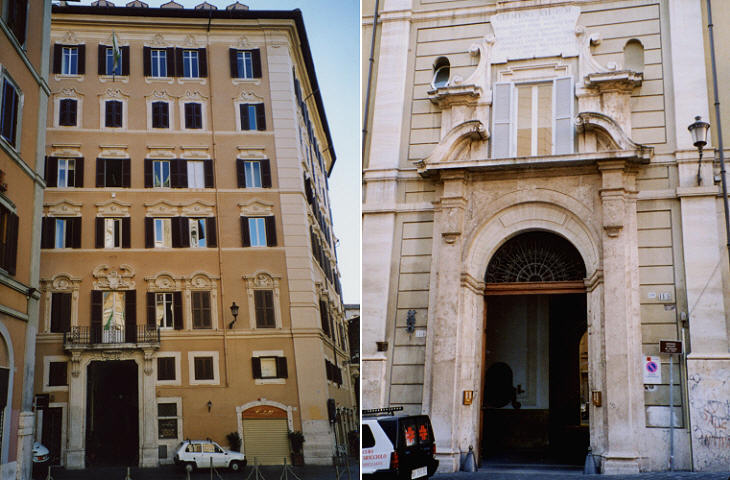 Some buildings were designed to accommodate both the landlords and the tenants. Palazzo Del Cinque, built in 1738-1742 by Francesco Ferrari, clearly shows the greater attention paid to the first floor, where the landlords had their apartment: the windows have a more sophisticated decoration, the ceiling is higher than in the other floors and there are balconies (one of which is shown in the picture used as background for this page). This explains why in Italy the first floor is also called piano nobile (noble floor). The architects found the way to design high and imposing entrances, without raising too much the ceiling of the ground floor. In Palazzo del Cinque, Ferrari found the space for a mezzanine (a lower storey between ground and first floor), in another building opposite this palace, the window of the first floor is part of the design of the entrance. 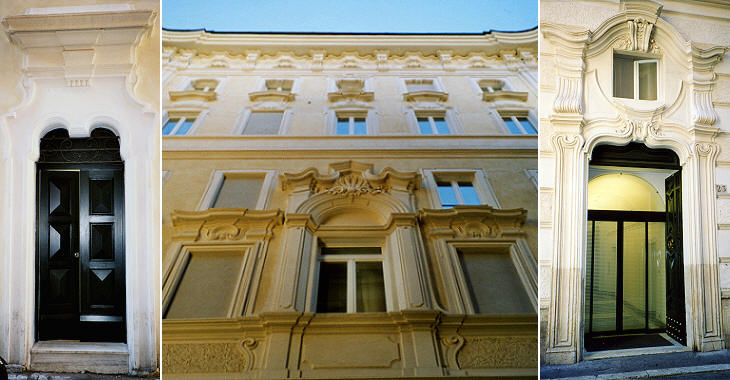 Building in Via dei Crociferi near Fontana di Trevi

Many buildings belonged to brotherhoods or monasteries as a result of donations or investments and there were architects in charge of the maintenance and improvement of a rather large real estate property. Francesco Bianchi is a minor architect who mainly worked for monasteries. His exuberant Borrominian style is evident in the 1738 building shown in the picture above and in another building next to S. Maria in Monterone. These buildings had usually five storeys plus a mezzanine. The upper storey apartments, notwithstanding the lack of lifts, were rented at a fair price because also in the XVIIIth century the view over the domes of Rome was highly valued. 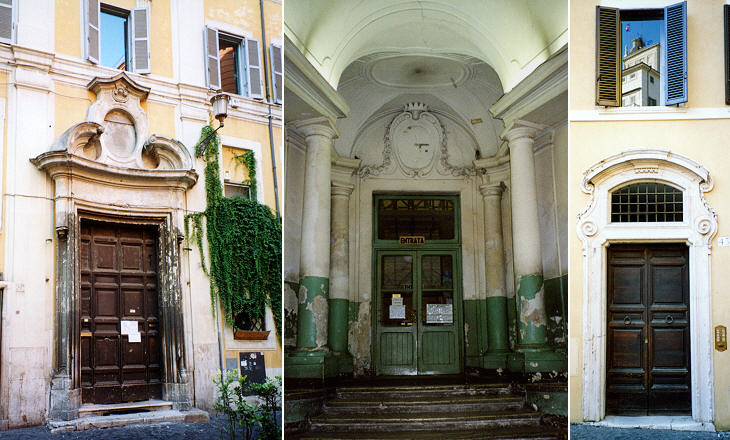 Giuseppe Ferroni is a minor architect who mainly worked after 1750, the year traditionally thought to close the Baroque period in Rome. He rebuilt a monastery in Via del Lavatore and for the same monastery two adjoining houses. The entrance to the monastery shows that the experiences made in designing houses split into flats, ended by influencing the design of religious buildings too. It shows also that, while the upper classes were starting to distance themselves from the Baroque style, its key features were still largely used. The monastery is today a school and the students do not appear to have been told that they are housed in a very interesting piece of architecture. The house in Vicolo Scanderbeg is opposite the back entrance to Palazzo del Quirinale and it has a nice view over its little loggia (reflected in the glass of the window).
Palazzo Centini is another interesting example of Barocchetto house.