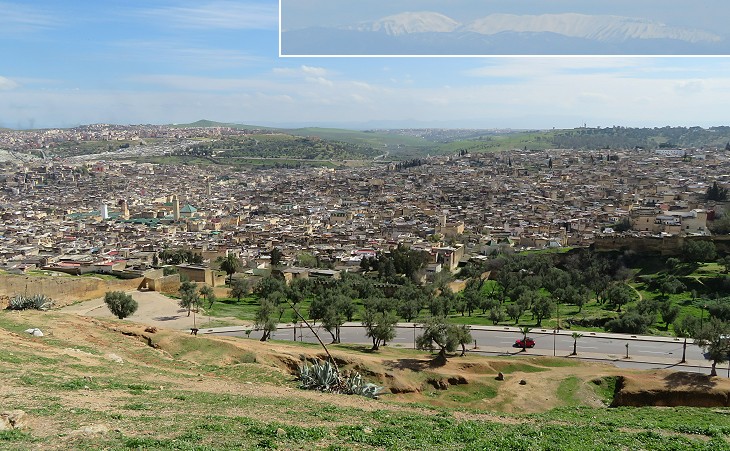 Fez el-Bali (Old Fez) seen from the Marinid Tombs (see below); (inset) snow-capped Middle Atlas Mountains which are visible in the distance

A World it is to see, how large, how populous, how well-fortified and walled this citie is.
Leo Africanus - The history and description of Africa: and of the notable things therein contained - 1526 - 1600 translation by John Pory
Leo Africanus, born at Grenada, and educated at Fez, having, while very young, been taken at sea, was conveyed to Rome. The little knowledge and taste he possessed, for taste can only be acquired by habits of seeing and comparing the most perfect models, did not suffer him to perceive all the beauties of that capital; and, prepossessed by the impressions his memory still retained, he wrote a very florid description of Fez. (..) The situation of Fez is remarkable for its singularity; it is seated at the bottom of a valley, and surrounded by hills in the form of a funnel, flattened at the narrow end. The upper part of the valley is divided into gardens, planted with high trees, orange groves, and orchards. (..) The city stands in the centre of a vast circumference, the variety of which is exceedingly agreeable. The gardens form a most delightful amphitheatre. (..) The situation of Fez, however, cannot be healthy; the humidity of its vapours renders the air heavy in summer, and fevers there are rather common.
Louis de Chénier - The Present State of the Empire of Morocco - 1788
Fez, considered as a whole, for the town consists of two completely separate parts, is surrounded by mountains on all sides excepting the south. (..) Old Fez forms the northern part, and, excepting to the south, is enclosed by mountains, partly, namely on the eastern side, built upon their slopes. New Fez (Fez el-Jedid) forms the southern part, and lies entirely in a plain.
Gerhard Rohlfs - Adventures in Morocco (in 1861) - 1874 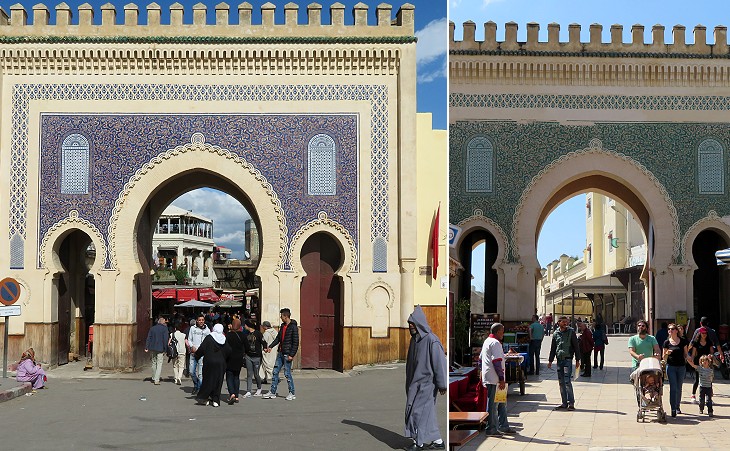 Bab el-Bouledjud (1913), the modern entrance to Fez el-Bali from Fez el-Jedid; its design is based on the monumental gates of Meknes

The City of Fez, the capital of the kingdom of the same name, was built about the end of the eighth century by Edris, the descendant of Mahomet and Ali, whose father, flying from Medina to avoid the proscriptions of the Caliph Abdallah, retired to the extremity of Africa, and was proclaimed sovereign by the Moors. Chénier 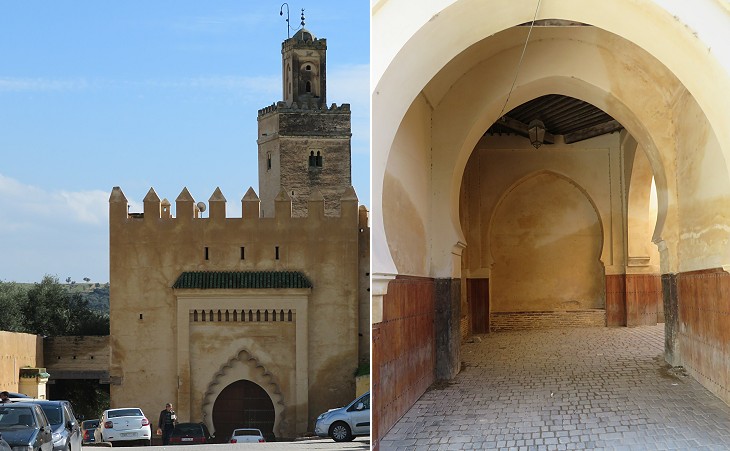 Old Fez has seven gates, inclusive of the one leading to the new town; whilst New Fez has only three, of which one is directed towards Old Fez. Rohlfs
Some of the historical gates of Fez have been replaced by nice-to-see grand entrances such as Bab el-Bouledjud. Bab el-Guissa retains its original design with an angle between the outer and the inner gate, a typical feature of medieval gates (see Bab al-Khoukha at Monastir in Tunisia). The original town was comprised of two large fortified quarters separated by a stream. In the XIth century, the Almoravids united the quarters within a sole enclosure and Bab el-Guissa was one of its gates. It is named after a XIIth century governor of the town. 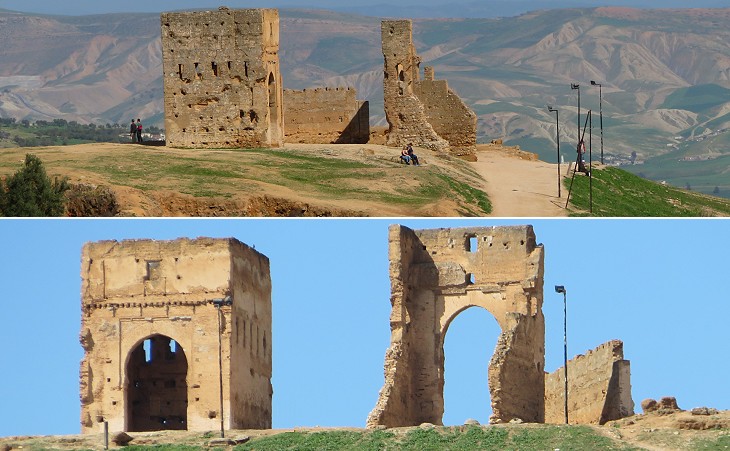 Founded in the IXth century and home to the oldest university in the world, Fez reached its height in the XIIIth-XIVth centuries under the Marinids, when it replaced Marrakesh as the capital of the kingdom. The urban fabric and the principal monuments in the medina - madrasas, fondouks, palaces, residences, mosques and fountains - date from this period.
UNESCO synthesis of the universal value of Fez which in 1981 was included in the World Heritage List.
The Marinids conquered Fez in 1250 and in 1276 they founded a royal palace and a new town near the old one. They used to bury their leaders at Chellah, a necropolis outside Rabat. In 1358 Sultan Abou Inan chose to be buried at Fez and eventually his successors built imposing tombs on a hill commanding a grand view over the old town. 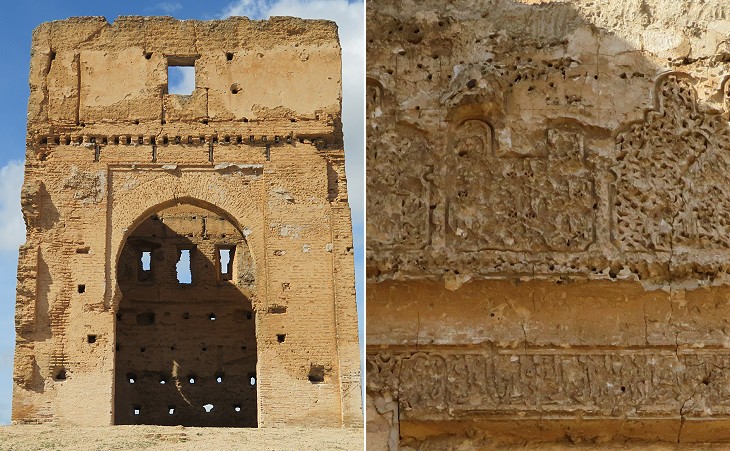 Of the sepulchres of the kings of Fez. Northward of the citie upon a certaine high hill stands a palace, wherein are the monuments of divers Marin kings, being most artificially hewen out of marble with epitaphes upon them, so that I cannot condignely expresse the maiestie and beautie thereof. Leo Africanus
Today only two tall rectangular mausoleums stand on a site which was surrounded by walls and included other tombs. Fragments of inscriptions are still visible, but they do not provide information on those for whom the mausoleums were built. The Marinids were overthrown by a revolt which began in Fez in 1465. 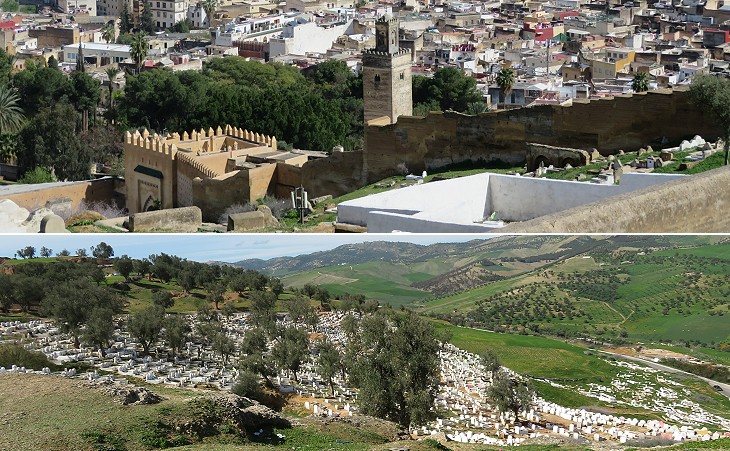 (above) Cemetery of Bab el-Guissa, outside the gate by the same name; (below) a modern part of it

A description of the common place of buriall without the citie. Many fieldes there are without the citie, which have been given by certaine noblemen for the buriall of the dead. Upon their sepulchers for the most part they lay a long three-square stone. When any noble man or any principall citizen deceaseth, they lay one stone over his head and another over his feete, whereupon useth to bee engraven some epitaph, with the day and yeere when the partie deceased. I my selfe bestowed much labour in gathering of epitaphes, which I saw both about Fez and in other places of Barbary; all which being set downe in a booke I gave unto the kings brother. The matter of their epitaphes is divers, some tending to consolation, and others to sorrow. Leo Africanus 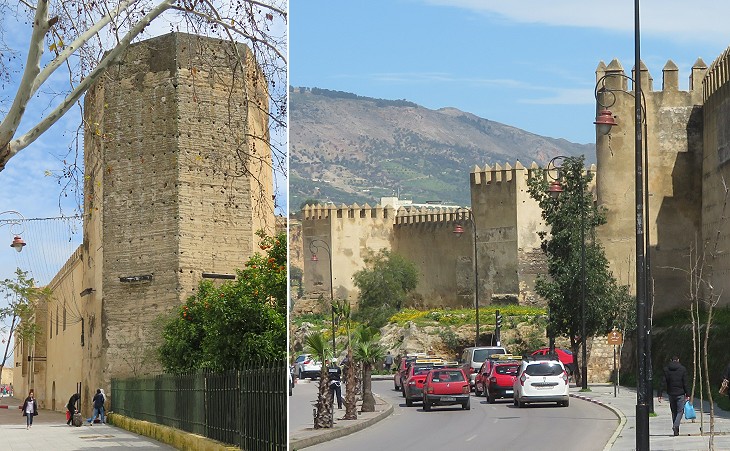 The wall of Old Fez, as well as the towers, is in an extremely dilapidated condition; that of New Fez is kept better, and in many places is a double one, namely on the south and south-west, where the exterior wall has, moreover, towers eighty feet in height. The walls, as well as the towers, are formed of a moulded clay, which is stamped between boards, and, mixed with chalk and cement, attains a great degree of hardness. The corners, arches, and sides of the gates are formed of hewn stone, as the composition, though durable in the bulk, is easily broken at the corners and edges. Rohlfs

Fez is divided into eighteen quarters, of which two are in the new town and the remainder in the old. (..) At night not only are the town gates closed, but also the gates which separate the different quarters from each other, and as the quarters usually communicate with each other by several streets, one may suppose how many gates have to be closed every evening. This is said to be done to ensure protection, principally against thieves, at any rate it cuts off all communication at night, and after the Tascha (the last prayer), it is impossible to get from one street or quarter to another. Rohlfs
The design of Bab Chorfa is the result of a restoration presumably carried out in the late XVIIIth century. 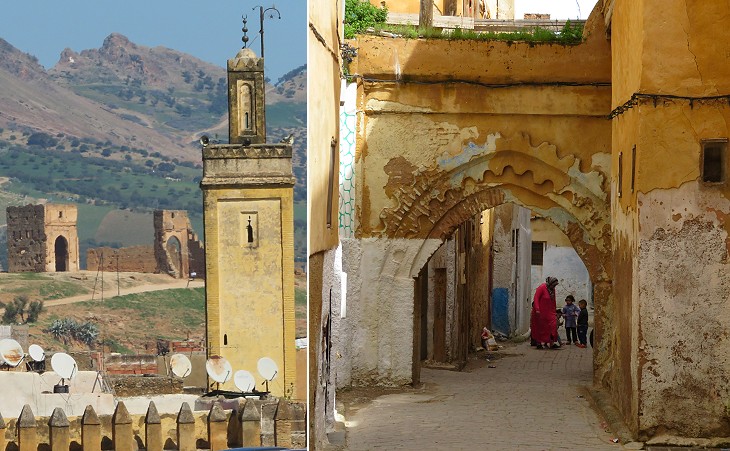 Kasbah an-Nouar: (left) minaret of its mosque; (right) life in this quarter which is cut off from the tourist-oriented areas of Fez el-Bali

This fortified quarter is inside the walls of Fez el-Bali and it was built in the early XIIIth century to strengthen the defence of the town. Its military purpose waned after the Marinids founded Fez el-Jedid and more so after new fortifications (Borj Nord and Kasbah Cherarda - see below) were built in the following centuries. In the late XVIIth century Kasbah an-Nouar was assigned to members of a tribe supporting Moulay Rachid the new Alaouite Sultan. Only members of this tribe were allowed to live there until the early XXth century. They were granted a degree of self-government. 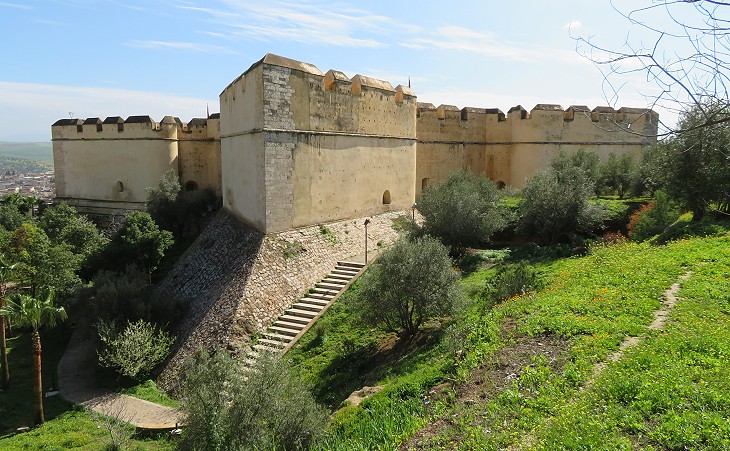 Ever ready to change their master, the inhabitants of Fez, at each revolution yield to the first approaching conqueror: this they pretend is a privilege they enjoy from the founder of their city. It is, however, very inefficacious and only serves to prove either the cowardice of its inhabitants or the difficulty of defence. Fez, in reality, is so situated as to be unable to make any resistance without exposing itself to total destruction. Chénier
Opposed to an European Power, Fez would be quite untenable. Even the two forts outside the town offer no protection against such an attack, commanded as they are by the neighbouring heights. Rohlfs
Borj Nord was built in 1582. It is possible that Portuguese prisoners taken at the Battle of the Three Kings in 1578 were involved in its design which took into account the impact of artillery on military architecture. As a matter of fact the fortress was more likely aimed at controlling the population of Fez, rather than at defending the town. 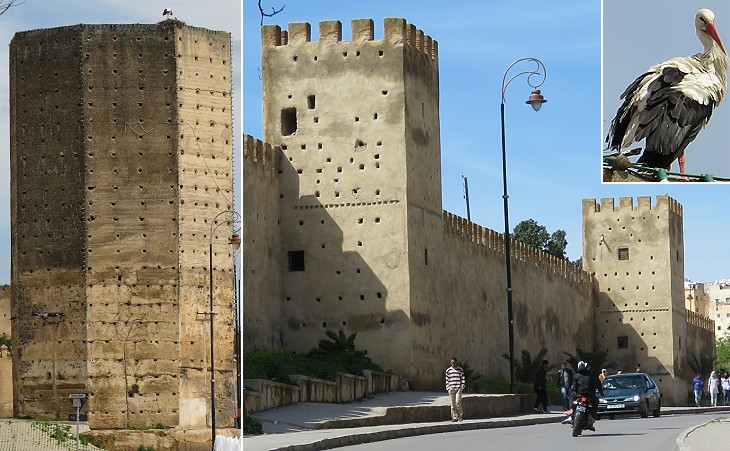 Kasbah Cherarda: (left) huge tower opposite Bab Segma; (right) walls; (inset) stork at the top of the tower (see other storks at Chellah); the image used as background for this page shows a "sebka" pattern, a typical Moorish decorative motif on a gate of Kasbah Cherarda

A large square fortress was built in the XVIIth century outside Bab Segma to house the guich, a military tribe who was very faithful to the reigning Sultan. At one point the Kasbah was the seat of the Udaya tribe. In 1833 they revolted and their leaders were confined to the Kasbah of Rabat which is named after them.