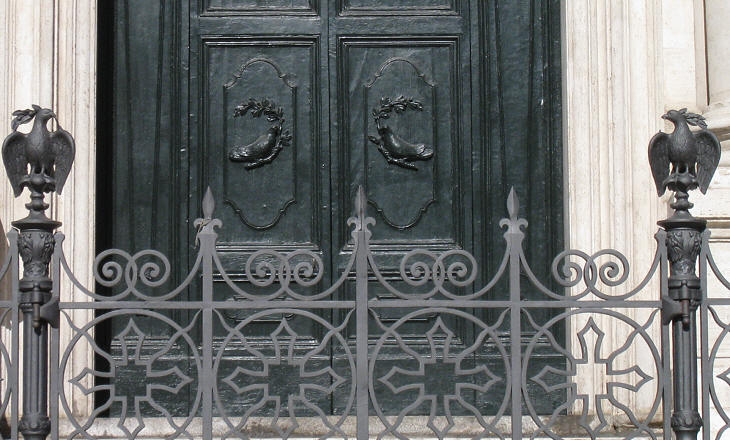 Entrance to S. Agnese in Agone

With the election in 1644 of Pope Innocent X (Giovan Battista Pamphilj 1572-1655) a Roman family entered history. The Pamphilj emphasized the assumed Greek meaning of their name (Pan=everybody filios=lover/friend- therefore" everybody's friend") and they made large use of their heraldic dove with the olive leaves, which in their view was a symbol of their friendliness.
The Pope was born in the family houses in Piazza Navona and this explains why he devoted so much effort into turning a fruit and vegetable market into one of the most impressive piazza of Rome.
Here the doves are at the entrance of the church of S. Agnese in Agone, where the Pope is buried. Originally the façade was on Via dell'Anima, but Francesco Borromini redesigned the church and changed the entrance to Piazza Navona, where it became the focal point of the square together with Fontana dei Quattro Fiumi by Gian Lorenzo Bernini, which also was decorated with a dove. 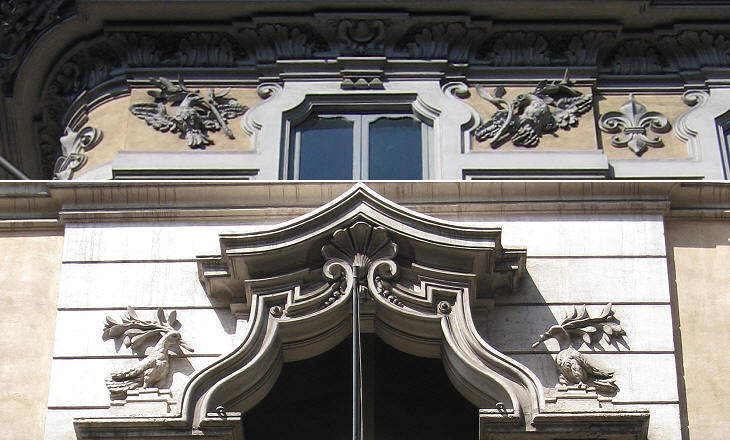 Windows of Palazzo Doria Pamphilj a Via Lata

The Pamphilj family was united at the end of the XVIIth century with the Doria family from Genoa and they enlarged their palace at the beginning of Via del Corso. In this palace the Doria Pamphilj still live and have the richest private gallery of Rome.
The façade on Via del Corso is a masterpiece of the end of the Baroque period. The decoration relies on the doves, flying in different ways all over the windows.

S. Andrea al Quirinale is perhaps the masterpiece of Gian Lorenzo Bernini. His re-interpretation of classical themes here reached its highest point. He designed a circular porch, which was a new way to make use of the square pronaos, an element of the Greek temples. The interior has an elliptical shape with the longer axis parallel to the façade. The church was commissioned by Prince Camillo Pamphilj, nephew of the Pope. The coat of arms is an attempt by Bernini to explore new ways to reformulate the classical pattern. In itself it is a little masterpiece to which are devoted many studies, as the old print shows (see also the plate by Filippo Juvarra). 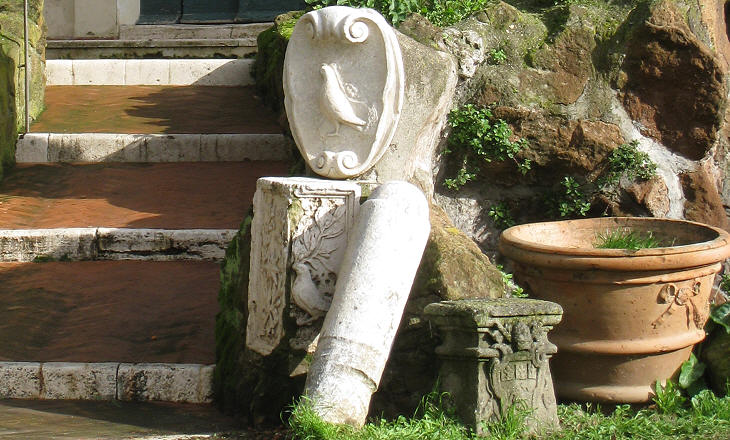 This large villa is immediately outside Porta S. Pancrazio on the Janiculum hill. The villa has also another name: "Villa Belrespiro" (respiro=breath) because of the fresh wind coming from the sea (the "ponentino"). In the centre of a vast park a relatively small palace (Palazzina) was built by Alessandro Algardi to provide the old Pope with a healthier location than the Vatican which was too close to the Tiber.
Formal gardens alternate with the wild, with many fountains and statues. Walking around one can find many traces of the former landlords. The façade of S. Nicola da Tolentino is decorated with the Pamphilj dove and fleurs-de-lis. Undoubtedly these symbols allow for a proper decoration of a church and by so doing lose their original identifying purpose of associating the Pamphilj name with the building. Inside this church the Pamphilj chapel has a very interesting family coat of arms by Algardi which is shown next to the plate by Filippo Juvarra.

In the Castelli Romani 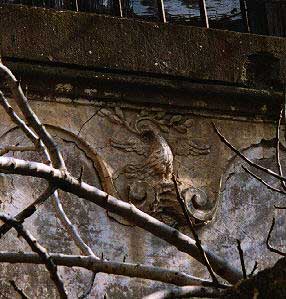 South of Rome lies an area of volcanic hills, the Colli Albani. In the main town Albano, where the Pope still retains a large Villa, the Pamphilj had one of their palaces. Today it's abandoned and does not have any impressive looks, so it is not mentioned in the guides.
The little garden has gone wild, but when the eye meets the dove, one suddenly realizes that history and art were here.