An Excursion to Cortona: p.3 Churches
(Detail of the Cathedral of Orvieto) 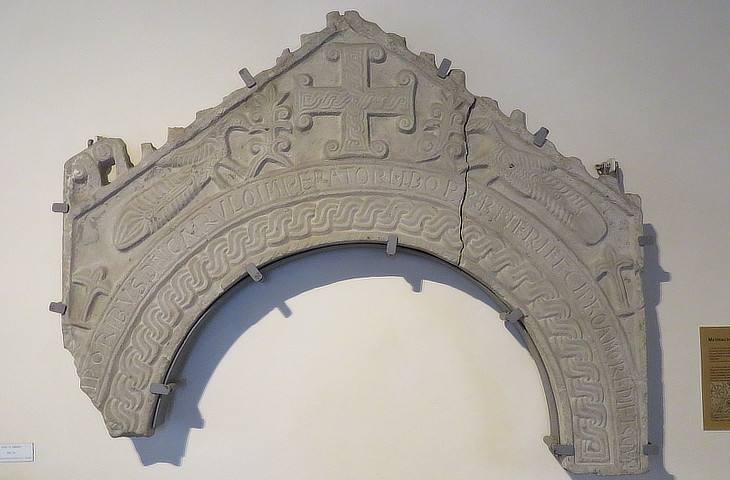 Vincent, an early IVth century martyr from Zaragoza was the first patron saint of Cortona and a church dedicated to him was built in the IXth century. It became a cathedral in 1325 when the town was made a bishopric see and it retained this function until 1507. It was situated outside the walls of the town and it was demolished in 1785. The fragment of its canopy is decorated with peacocks, a traditional Christian symbol, but it is particularly interesting because of its inscription which makes reference to an Emperor Charles, most likely Charles the Bald of the French branch of the Carolingian dynasty, who was King of Italy in 875-877 and who was an ally of Pope John VIII. 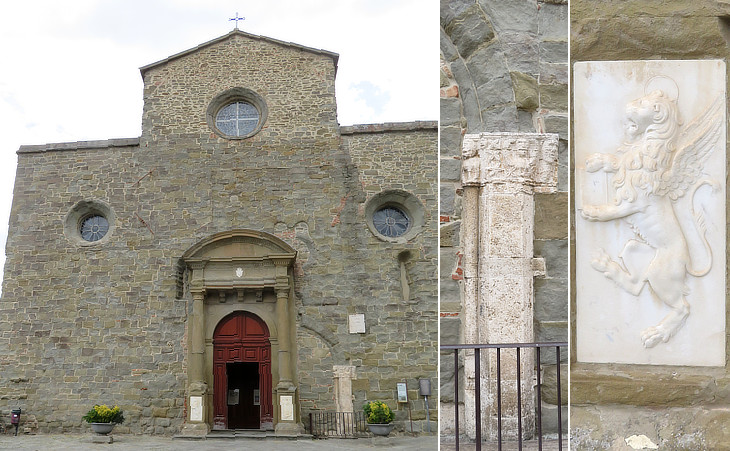 Cathedral: (left) façade (one of the first things a traveller from Rome notices in Tuscany is that the façades of many churches were never completed); (centre) pillar of the medieval church; (right) Winged Lion of St. Mark, symbol of Cortona (and of Venice), relief at the side of the entrance; another relief portraying St. Michael the Archangel is shown in the image used as background for this page

The town is pretty well built and is the see of a bishop suffragan of Florence. The cathedral is a very old building. (..) There are some handsome paintings in S Francis, S Augustin, and other churches.
Thomas Nugent - The Grand Tour - 1749
The church was rebuilt in the XVth century. Unlike S. Vincenzo it is located in the very centre of the town, not far from Palazzo Pretorio and the main square. It is dedicated to the Assumption of the Virgin Mary, but a relief depicts the symbol of St. Mark who became that of the town because Cortona was freed from the occupation of the Aretines on April 25, 1261, the Feast of St. Mark. 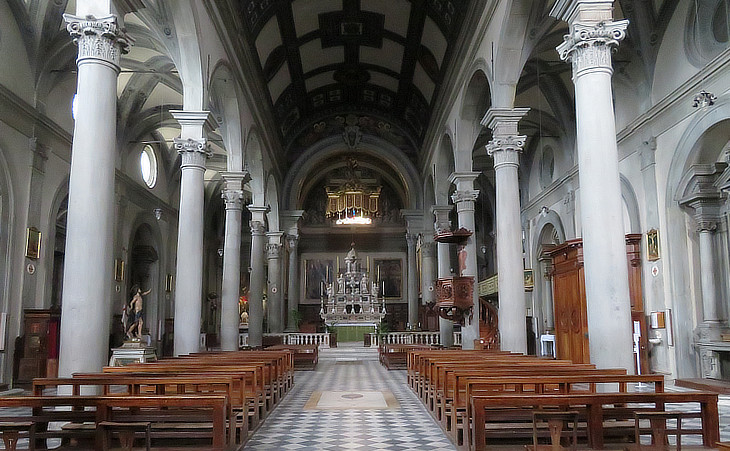 The Cathedral, said to be as old as the 10th century, was restored in the 18th by Galilei, the Florentine architect.
John Murray - Handbook for travellers in central Italy - 1853
The interior was redesigned in the late XVth century and it retains most of its Renaissance aspect, notwithstanding some modifications which were made in the following centuries. The finest works of art it contained were removed to the nearby Museo Diocesano where they can be seen in better light conditions. 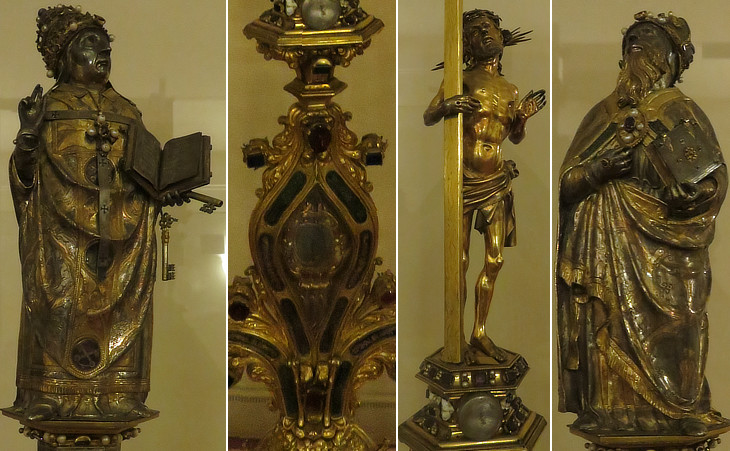 Museo Diocesano - Reliquiario Vannucci (1458) - from the Cathedral: (left) Pope Nicholas V; (centre) a) section containing a fragment of a portrait of Christ on a cloth; b) Jesus carrying the Cross; (right) Gregory III, Patriarch of Constantinople in 1443-1451 (he is regarded as a saint by the Catholic Church)

This reliquary is both a fine piece of work by a Florentine goldsmith (Giusto) and a memorial of the temporary union of the Western and Eastern Churches. It was commissioned by Jacopo Vagnucci, Bishop of Perugia who held important posts in the Roman curia especially during the pontificate of Pope Nicholas V. At that time, after the 1439 Council of Florence, the Patriarch of Constantinople accepted the supremacy of the Pope and Gregory III moved to Rome in 1451 and he died there in 1459. The conquest of Constantinople by Sultan Mehmet II in 1453 led to the appointment of a new Patriarch of Constantinople (Gennadius Scholarius) who opposed the union with Rome. 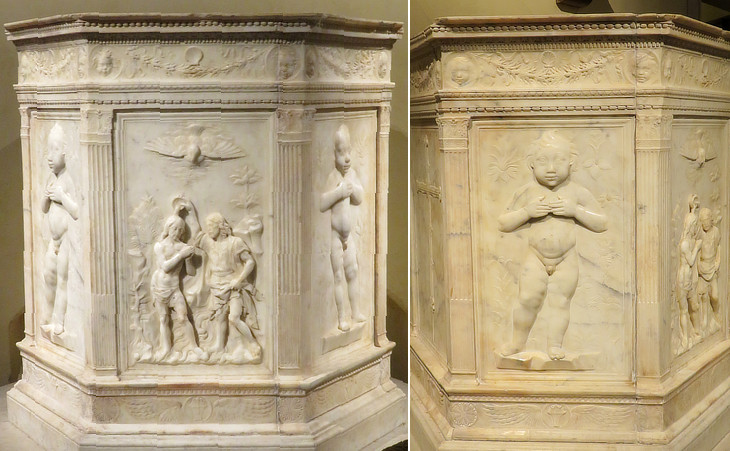 Ciuccio di Nuccio was active in Cortona in 1474-1491. The baptismal font is remarkable for its Renaissance architectural frame and decoration (see a similar approach in a relief by pupils of Andrea Bregno at S. Maria del Popolo in Rome (ca 1473)). 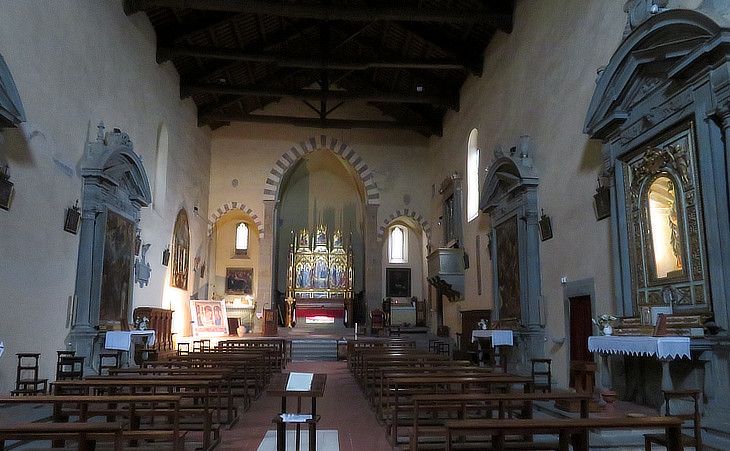 The fact of being made a bishopric see led some of the main medieval orders (Franciscans, Augustinians, Dominicans and Servants of Mary) to establish their convents and churches in Cortona. The Dominicans chose a site near the eastern entrance to the town. Their church was embellished with fine paintings, in particular some by Fra Angelico aka Beato (Blessed) Angelico, a Dominican monk (1395-1455). In 1982, Pope John Paul II proclaimed him "blessed" in recognition of the holiness of his life, thereby making the title of "Blessed" official. 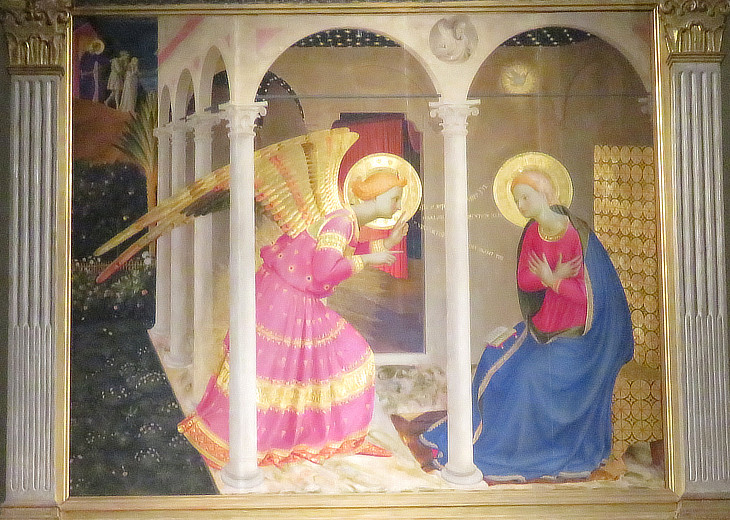 Museo Diocesano: Annunciation by Beato Angelico from S. Domenico (in the upper left side the painter depicted the Expulsion from the Garden of Eden)

A very beautiful Annunciation by Fra Angelico da Fiesole, as well as two gradini admirably preserved, on which are represented events in the lives of the Virgin and S. Domenico were formerly in the church of S. Domenico. Murray
Enough of his works have come down to us to reveal not only his quality as an artist, but his character as a man. Perfect certainty of purpose, utter devotion to his task, a sacramental earnestness in performing it, are what the quantity and quality of his work together proclaim. (..) "God 's in his heaven - all 's right with the world" he felt with an intensity which prevented him from perceiving evil anywhere. (..) Upon the picturing of blitheness, of ecstatic confidence in God's loving care, he lavished all the resources of his art. Nor were they small. To a power of rendering tactile values, to a sense for the significant in composition, (..) Fra Angelico added the charm, of great facial beauty, the interest of vivid expression, the attraction of delicate colour.
Bernard Berenson - The Florentine Painters of the Renaissance - 1896 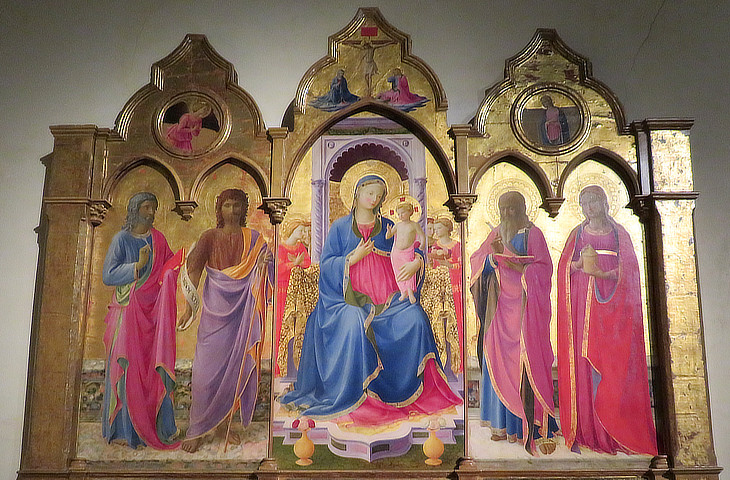 This man, although he could have lived in the world with the greatest comfort, and could have gained whatever he wished, besides what he possessed, by means of those arts, of which he had a very good knowledge even in his youth, yet resolved, for his own peace and satisfaction, being by nature serious and upright, and above all in order to save his soul, to take the vows of the Order of Preaching Friars; for the reason that, although it is possible to serve God in all walks of life, nevertheless it appears to some men that they can gain salvation in monasteries better than in the world.
Giorgio Vasari - Lives of the most eminent painters, sculptors & architects - transl. by Gaston Du C. De Vere
Beato Angelico lived in the Dominican monastery of S. Marco in Florence, but such was his fame that in 1446 he was summoned to Rome where he decorated Cappella Nicolina (it opens in another window) and in 1447 he began the frescoes of Cappella di S. Brizio in the Cathedral of Orvieto. He is buried at S. Maria sopra Minerva, the Dominican church of Rome, where he died in 1455. 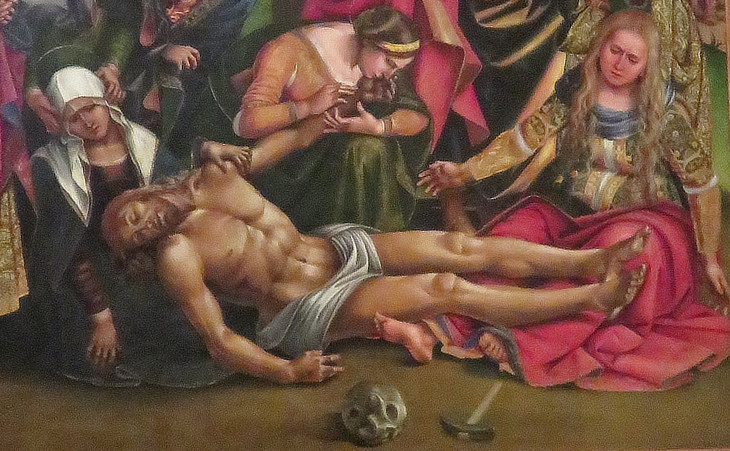 The Cathedral has several fine paintings, among which are a Deposition from the Cross, by Luca Signorelli, who was a native of Cortona. Murray
In 1502 Signorelli found time to paint for his Cathedral at Cortona the beautiful "Deposition," in which is a repetition of the Pieta of the Capella Nuova of Orvieto. The realism and pathos of this dead Christ are so convincing as to have given rise to the legend that it was painted from the body of his son, who died, or was killed, in this year. (..) Vasari thus speaks of it: "In Cortona, his native town, he painted a dead Christ; one of his most excellent works." It is an exact counterpart of the "Pietà" in the Orvieto frescoes, except that it is here reversed. It is a work of great beauty and feeling, painted with sincere emotion. The fine grouping, the restraint with which the sorrow is rendered, the real pathos of the scene, give the picture dignity and solemnity, and the glow of colour, obtained by the lavish use of gold in the embroideries, add to its richness and decorative beauty.
Maud Cruttwell - Luca Signorelli - 1899
A Deposition was painted by Signorelli or his assistants also at Castiglion Fiorentino. 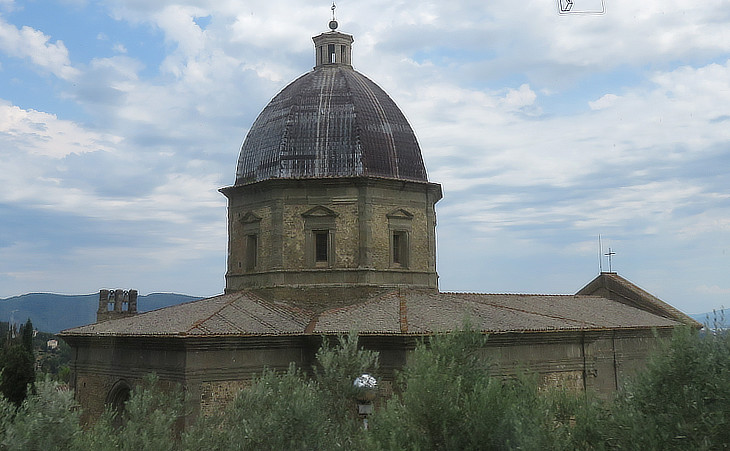 S. Maria in Calcinaio; the dome is octagonal similar to those of S. Maria del Fiore in Florence and S. Maria del Popolo in Rome

This church outside the walls of Cortona houses a miraculous image of the Virgin Mary. It was built in 1484-1515 by Francesco di Giorgio Martini, an architect from Siena who mainly worked at Urbino and in the Marches, both as a military and a civil architect. You may wish to see Madonna di S. Biagio at nearby Montepulciano, another Renaissance church which was built for a similar purpose outside the walls of the town. But isn't this relic matter a little overdone? We find a piece of the true cross in every old church we go into, and some of the nails that held it together. I would not like to be positive, but I think we have seen as much as a keg of these nails.
Mark Twain - The Innocents Abroad - 1869
The reliquary is a copper structure having the shape of a Renaissance building with twelve niches housing silver statues of the Apostles and a dome for the relic. In the XVIIth century the decoration was completed by reliefs depicting scenes from the Old and New Testaments. You may wish to see an earlier reliquary at Castiglion Fiorentino. 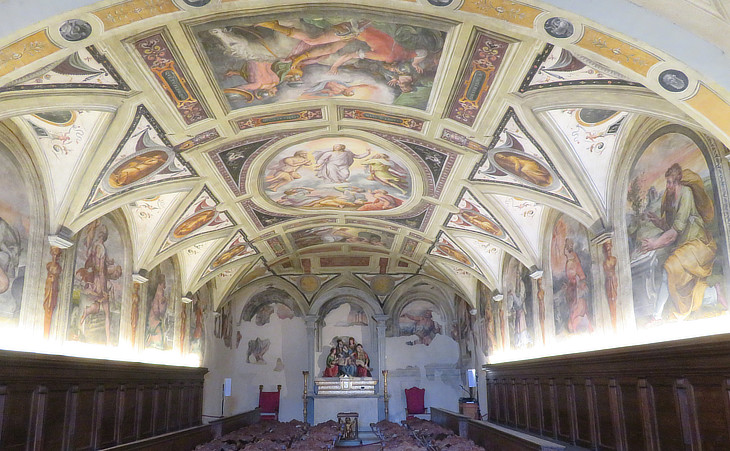 Giorgio Vasari (1511-1574) was born at Arezzo and he became the court architect of Grand Duke Cosimo I de' Medici. In this capacity he was involved in the design of many buildings in Florence and other towns of Tuscany. In addition to being an architect and an art historian he was also a painter with a very busy workshop. In 1554 he was asked to advise on the decoration of an underground oratory in the Jesuit church of Cortona; the frescoes were executed by his pupil Cristoforo Gherardi. The two artists were involved also in the decoration of Palazzo della Cannoniera at Città di Castello. 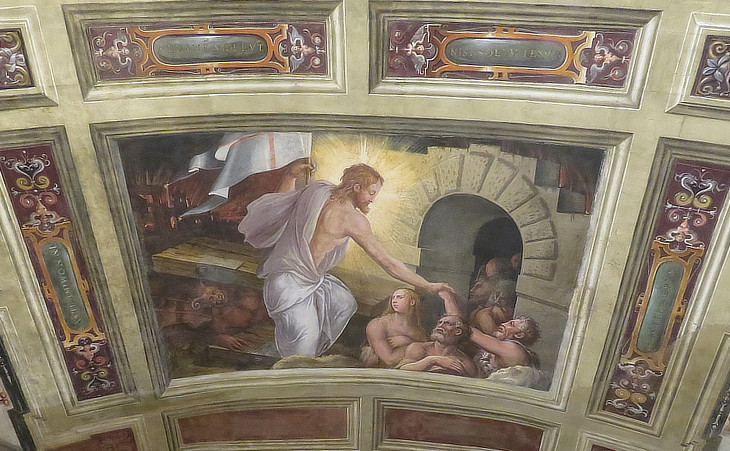 Vasari could not refuse to go in those days to Cortona, where he painted in fresco the vaulting and the walls of the Company of Jesus with the assistance of Cristofano, who acquitted himself very well, and particularly in the twelve different sacrifices from the Old Testament which they executed in the lunettes between the spandrels of the vaulting. Indeed, to speak more exactly, almost the whole of this work was by the hand of Cristofano, Vasari having done nothing therein beyond making certain sketches, designing some parts on the plaster, and then retouching it at times in various places, according as it was necessary. This work finished, which is not otherwise than grand, worthy of praise, and very well executed, by reason of the great variety of things that are in it, they both returned to Florence in the month of January of the year 1555. Vasari
Gherardi died in 1556 and Vasari included his pupil among the most eminent painters.