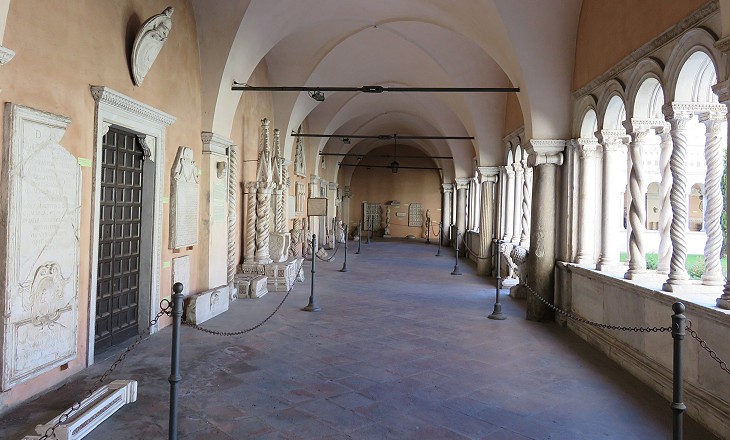 A wing of the cloister

At the end of the XVIth century Pope Sixtus V started a large renovation of St. John Lateran by building a new side façade. The transept was modified by Pope Clement VIII. Pope Innocent X commissioned Francesco Borromini the redesign of the five naves for the 1650 Jubilee. Only the 1370 ciborium and parts of the main nave pavement (early XVth century) were left in situ. Most monuments and decorations were lost, but some of them were placed in the cloister in a rather haphazard arrangement. 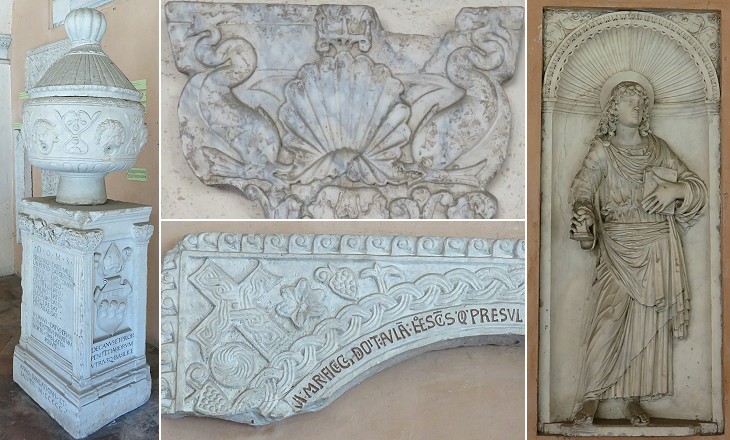 The exhibits on display in the cloister cover a long period of time, from Roman altars to Renaissance funerary monuments. Art historians have been able to identify the former location in the basilica of some of them, but of others we only know they were there. Several parts of the ancient basilica were damaged by fire in 1308 and 1361. 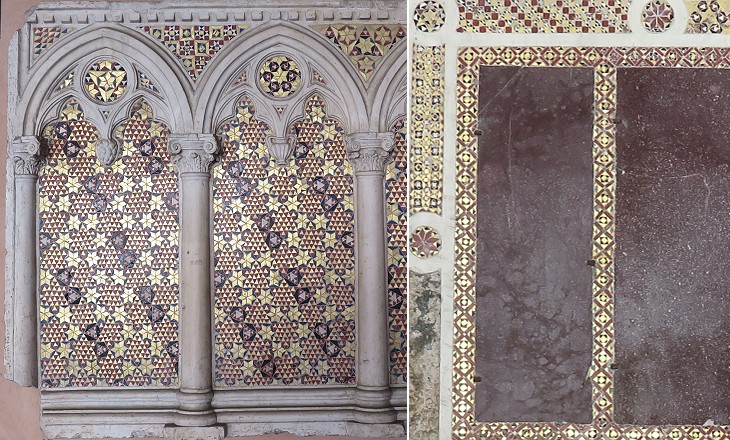 Mosaic panels which decorated the basilica

This website has a page on the golden mosaics which embellish the façades and the apses of many Roman churches. The small mosaic panels which once decorated the interior of the basilica are not as impressive in size, but the elegance of their design makes up for their dimensions. 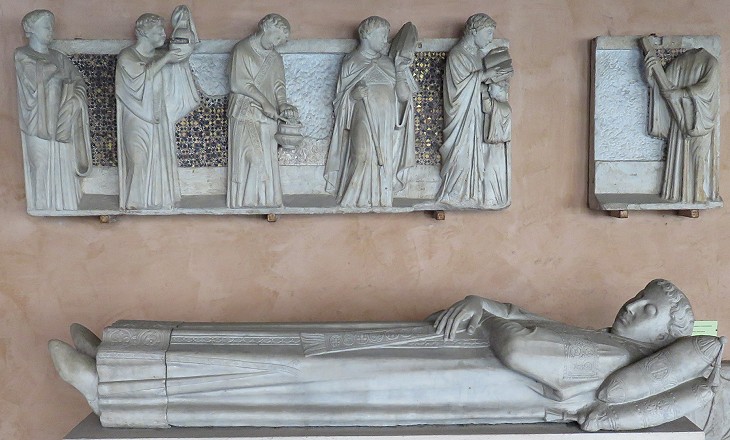 Riccardo degli Annibaldi was one of the most influential cardinals of the XIIIth century. He participated in the election of nine popes. His funerary monument is a work by Arnolfo di Cambio, but only the statue of the dead and a panel of priests celebrating mass are housed in the cloister. They most likely were part of a monument similar to those Arnolfo designed for Pope Adrian V and Cardinal Guillaume de Braye. 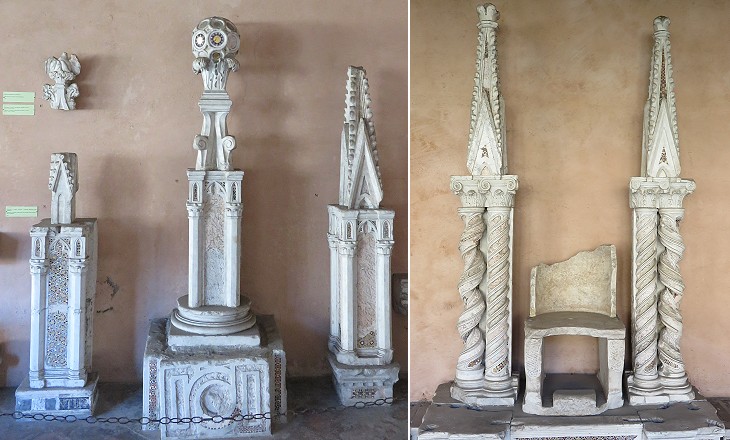 A blending of Gothic vertical thrust and Cosmati decoration characterized many of the side altars of the basilica which were removed in the XVIIth century. The cloister houses one of the thrones used for the ceremony during which a new pope took possession of St. John Lateran as the new Bishop of Rome. The pope sat on it. The cardinals afterwards raised him up singing Suscitans de terra inopem, de stercore erigens pauperem (Psalm 112 - He lifts up the needy from the ground, and he urges the poor away from filth). This is clearly what has given this throne the name of stercorary. This part of the ceremony was discontinued in the XVIth century. 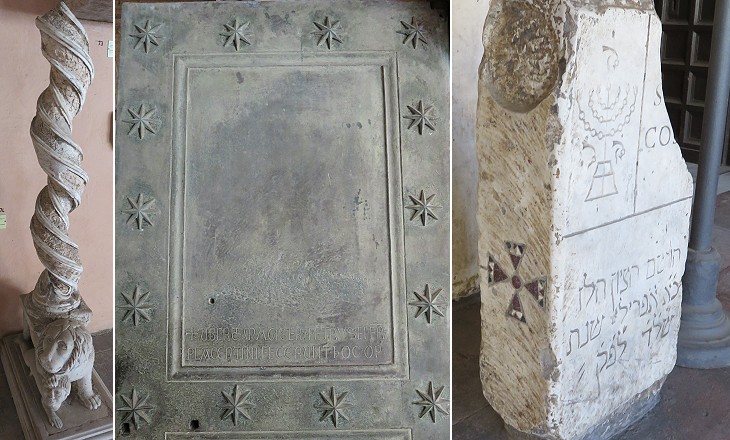 The items on display in the cloister are not a "must see", but they stimulate thoughts on the history and art of Rome. In the portico are several objects that belonged to the ancient church, such as altars, columns, the Pontifical chair, ornaments in mosaic etc., which are usually pointed out by the Custode (warden), to the curiosity of the stranger.
Rev. J. Donovan - Rome Ancient and Modern and its environs - 1842.
Today's visitors may rent an audioguide or (better) read the short explanations placed near each item. 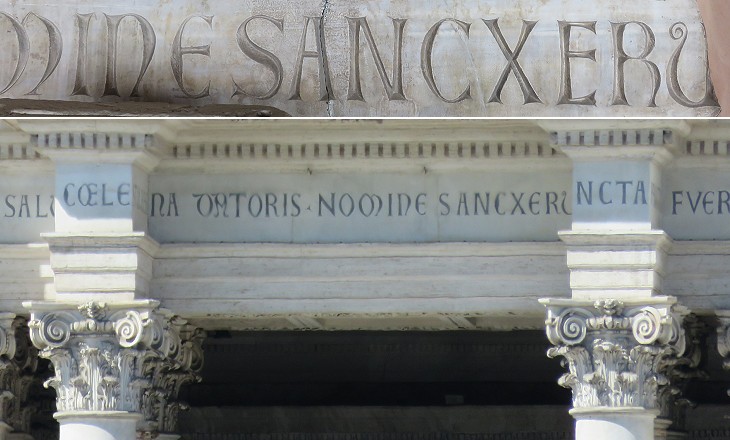 (above) Fragments of the old inscription on the façade; (below) XVIIIth century inscription

In 1732 Pope Clement XII decided the basilica needed a new façade. Only one thing of the old façade was retained: the central part of the mosaic by Jacopo Torriti which decorated it. In addition Pope Clement XII chose to repeat the old dedicatory inscription, although he placed it in a less evident position. Fragments of the old inscription in the cloister show that the same "font" was used for the new one. 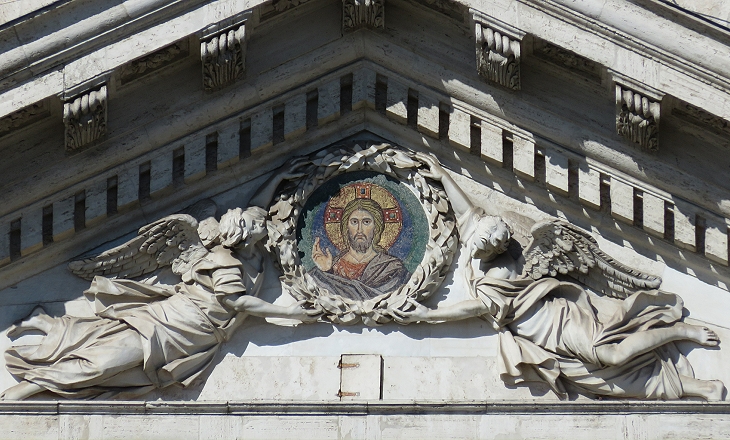 The only remaining part of the original mosaic by Jacopo Torriti

The image in the background of this page shows a section of an altar with the coat of arms of Pope Martin V.

Other Days of Peace pages:
A Sunny Day in Villa Borghese
At the Flea Market
At the Beach
Voicing Your Views ..... and feeling better
Christmas in Rome
Eating Outdoors
Celebrating the Foundation of Rome
A visit to Roseto di Roma
The procession of La Madonna de Noantri
Running the Marathon
Watching the Parade
Finding Solace at the Protestant Cemetery
Attending 2007 July Events
Rome's Sleepless Night
Attending Winter Ceremonies
Jogging at Valle delle Camene
Sailing on the River to see the Bridges of Roma
An October Outing to Marino
A Special Spring Weekend
Embassy-hunting in Parioli
Attending a Funeral ...and enjoying it!
Celebrating Eritrean Michaelmas in Rome
Visiting Rome at Dawn
Visiting Rome in the Moonlight
Visiting Rome on a Hop-on-Hop-off Bus
Visiting Multi-ethnic Rome
Baroque Fireworks
Playing in the Snow at the Janiculum
Watching the Pride Parade
Reading Memoirs of Hadrian at Villa Adriana
Visiting the Movie Sets at Cinecittà
Looking up at the Ceilings of the Vatican Palaces
Reading Seneca at the Baths
Reading Ovid at St. Peter's
Walking the Dog at Valle della Caffarella