Castelgandolfo
(a detail of G. Vasi's Grand View of Rome)

But Juno, gazed at the plain, looking from the top of a hill
(called Alban now, then without name, honour or glory)
at the twin ranks of Laurentum and Troy, and Latinus's city.

Virgil - The Aeneid - Book XII. Translation by A. S. Kline Lake Albano and Mount Albano were at the centre of the territory controlled by the Latins, the Italic tribe to whom Romulus, the mythical founder of Rome, belonged.
The volcanic origin of the lake caused sudden variations of its water level which puzzled the Romans:
In the long and bitter war against Veii, the Romans (..) were unable to capture the city. (..) By a remarkable prodigy the immortal gods showed the Romans a path to victory they longed for. All of a sudden, the Alban Lake rose beyond its normal water level, although its volume had not been increased by rain from heaven nor added to by the flooding of any river. Envoys were sent to the Delphic oracle to find an explanation for this mystery, and they brought back the instruction of the oracle; the Romans should release the water of that lake and flood the fields. By this means, Veii would come under the power of the Roman people. Valerius Maximus: Memorable Deeds and Sayings - Book I.6.2. Translation by Henry John Walker - Hackett Publishing Company.
The Romans excavated an underground outlet to carry off the water of the lake when it exceeded a certain level; the tunnel has a length of almost a mile and it is regarded as one of the first examples of the engineering skills of the ancient Romans.
Notwithstanding its closeness to Rome, the lake is still surrounded by woods on most of its southern half, owing to landscape protection regulations which have included the area in a regional natural park. 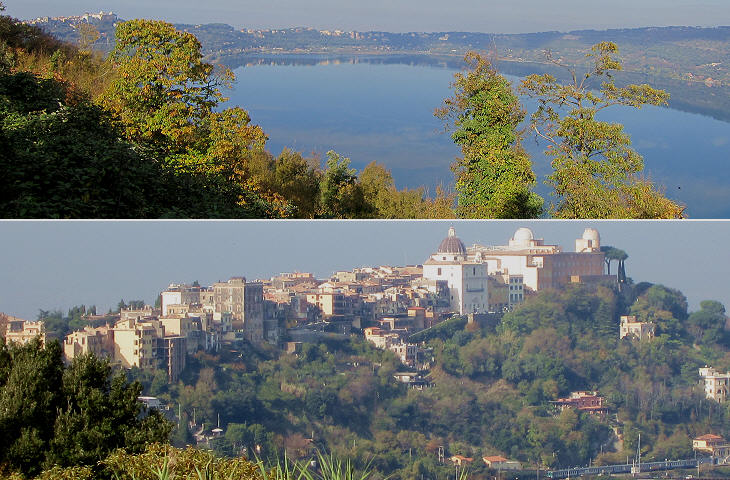 (above) Lake Albano seen from Albano: Castelgandolfo is in the upper left corner; (below) Castelgandolfo and in the lower right corner the Rome-Albano suburban train

The road to Castel Gandolfo, winding around the Alban lake, overshadowed by noble forests, and with fine views of the heights on the opposite side, is of such varied beauty that the pleasure of passing over it only once is alloyed by the thought that it is not to be traversed a second time.
George Stillman Hillard - Six Months in Italy in 1847-1848
Castel Gandolfo owes its name to a castle built by the Gandolfi, a family of Genoese origin, in the XIIth century; in the XIIIth century the castle was acquired by the Savelli, a very powerful Roman family to whom two popes of that century belonged (Honorius III and Honorius IV). The Savelli owned several other fiefdoms in the area, but the wealth of the family gradually declined and in 1596 they had so many debts that Castelgandolfo was confiscated by the Camera Apostolica; the town became a direct possession of the Papal State. 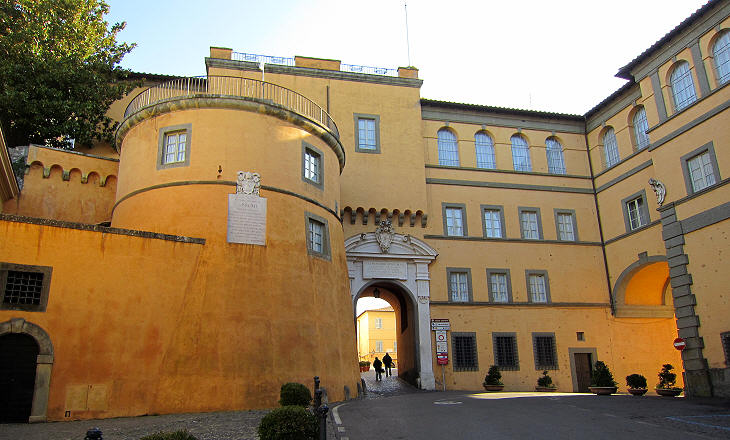 Castelgandolfo is located on the top of the ridge surrounding Lake Albano; while the side towards the lake is precipitous, that towards Rome has a gentle slope and it was chosen by Emperor Domitian to build a large villa there. In the late XVIth century several important Roman families followed the example of the Emperor and built villas in the area and in particular at Frascati. Cardinal Maffeo Barberini chose Castelgandolfo for his summer holidays; in 1623 he became Pope Urban VIII and he commissioned the construction of a palace suitable for the needs and rank of a pope; he ordered its entrance to be protected by a round tower projecting from its external walls (he did the same at Palazzo del Quirinale). 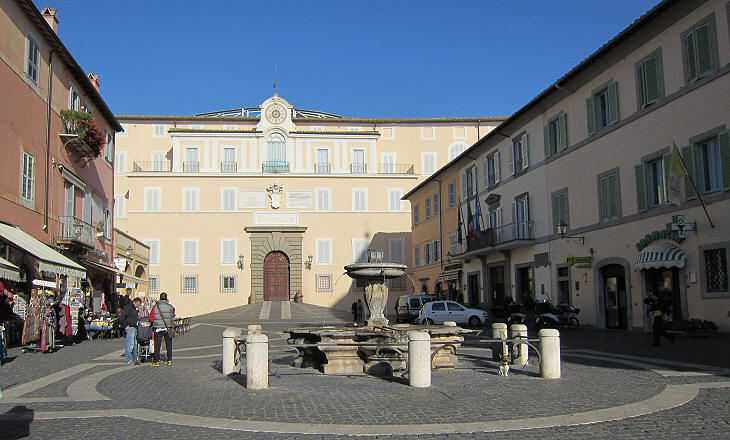 Castel Gandolfo was the favourite summer residence of the popes for the last two hundred and fifty years, and the only portion of their property outside the Vatican walls, left untouched since the Sardinian occupation. (..) Pius IX. spent part of each summer here, before the invasion; and every afternoon saw him riding on his white mule in the old avenues or on the terraced paths above the lake, followed by his cardinals in their scarlet robes - a most picturesque and mediaeval scene.
Augustus J. C. Hare - Days near Rome - 1875
The design of the palace was commissioned to Carlo Maderno, to whom Pope Urban VIII had also requested the design of Palazzo Barberini in Rome. The palace was completed during the pontificate of Pope Alexander VII by Gian Lorenzo Bernini. 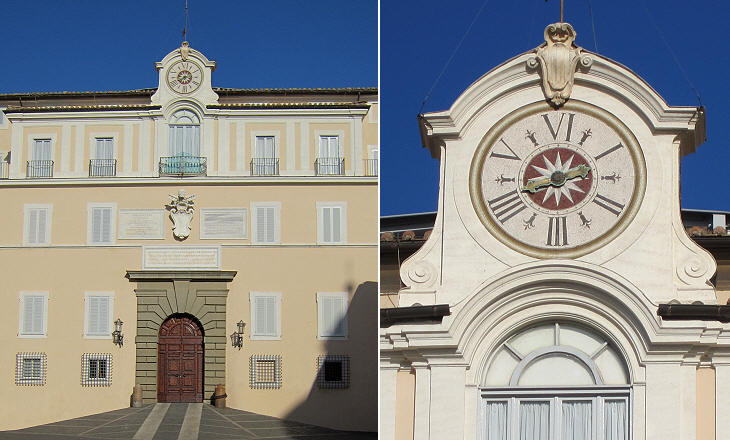 In the inscription Pope Alexander VII placed below his coat of arms he celebrated the positive effects of the pleasantness and salubrity of Castelgandolfo on body and soul. The small balcony is currently utilized for papal blessings. The clock is still split into six sections following the time counting system which was in place in Italy until Napoleon imposed the move to the European system: it was reinstated briefly in the Papal State in 1815-1846. In 1658 Pope Alexander VII commissioned Bernini the erection of a church dedicated to St. Thomas of Villanova, a XVIth century Spanish Augustinian friar, in the main square of Castelgandolfo. The choice of this saint was due to the fact that he was canonized by Pope Alexander VII in that same year.
Perhaps due to space limitations Bernini chose a Greek cross layout, but it must be said that in his last years he designed other churches which did not follow the traditional Latin cross pattern: S. Maria dell'Assunzione at Ariccia which is round and S. Andrea al Quirinale which is elliptical. For the decoration of S. Tommaso di Villanova Bernini relied on a skilled team of assistants and in particular on Antonio Raggi, a sculptor extremely talented in designing aerial stucco statues (you can see other works by Raggi in the ceiling of il Gesù).
The golden six mountains having on top a star, positioned at the top of the pillars supporting the dome are the heraldic symbol of Pope Alexander VII. 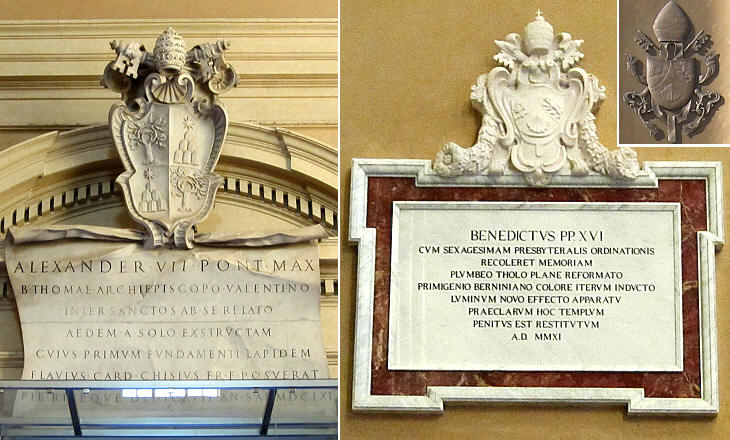 S. Tommaso di Villanova: (left) interior of the façade: coat of arms and inscription of Pope Alexander VII; (right) coat of arms of Pope Benedict XVI and in the small image another of his coats of arms on a modern gate near Porta Angelica

The oldest and finest coat of arms inside the church is that of Pope Alexander VII. Many of his successors placed their coat of arms above an inscription explaining what they had done for the maintenance and embellishment of the church and in 2011 Pope Benedict XVI followed the tradition. For the occasion he authorized an exception to his decision to innovate papal coats of arms by replacing the triple crown with a mitre; the inscription makes reference to the sixtieth anniversary of his ordainment and to improvements he made by having the church repainted in its original light colour (something which has occurred in many other churches and palaces of Rome). 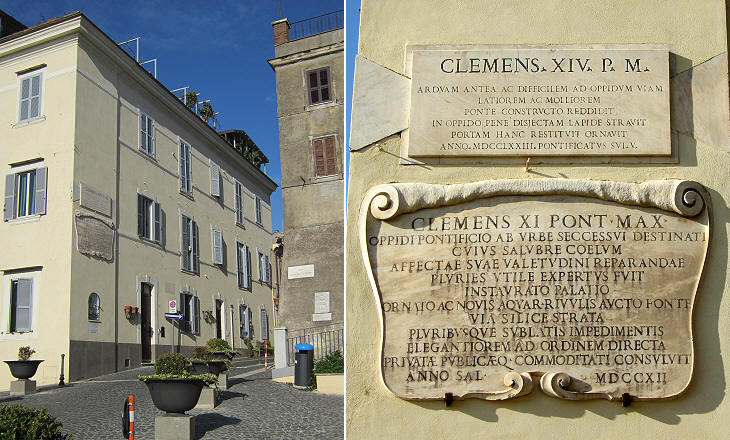 Castel Gandolfo October 12th 1787. We live here as in a watering place; only in the morning I keep out of the way for the sake of drawing; then you must give all the day to society, which for the short time I am to be here is all very well for me. I see people once more without any great loss of time, and a great number at once. (..) It is a merry company, and we are never at a loss for something to laugh at. In the evening we go to the play, where Punchinello is the principal figure.
J. W. Goethe - Italian Journey - translation by Charles Nisbeth
The popes did not limit themselves to building the palace and the church, but they also redesigned the urban layout of Castelgandolfo which is based on two parallel straight streets with many houses which were rented for the villeggiatura.
The two inscriptions by Pope Clement XI (1712) and Pope Clement XIV (1773) are interesting because they show the change in style which took place in the second half of the XVIIIth century. The first inscription follows the pattern of a cartouche, a tablet representing a scroll with rolled-up ends, while the second inscription has a much sober ancient Roman format, which was adopted in 1743 for marking the boundaries of the Roman Rioni. In 1929 the Kingdom of Italy and the Holy See reached an agreement to settle the quarrel about the 1870 annexation of the Papal State to Italy. The Papal Palace at Castelgandolfo and a series of other adjoining properties became extraterritorial appendages of the Vatican City State.
Pope Pius XI, the ruling pope at the time of the agreement, made several improvements to the papal properties and in 1934 he relocated the Vatican Astronomical Observatory to Castelgandolfo.
Each summer the popes of the XXth century left Rome for Castelgandolfo, but Pope John Paul II often chose to spend a few weeks on the Alps instead. In 2011 Pope Benedict XVI spent almost three months at Castelgandolfo, probably influenced by his fellow countryman Goethe who was enthusiastic about the days he spent there in 1787. There are two roads linking Castelgandolfo with Albano and they are both called Galleria because the trees which flank them cover the view of the sky. While Galleria di Sotto (lower gallery) has lost its beauty because of the traffic, Galleria di Sopra (upper gallery) is still a very attractive promenade with views over the lake; it ends at Convento dei Cappuccini in Albano. 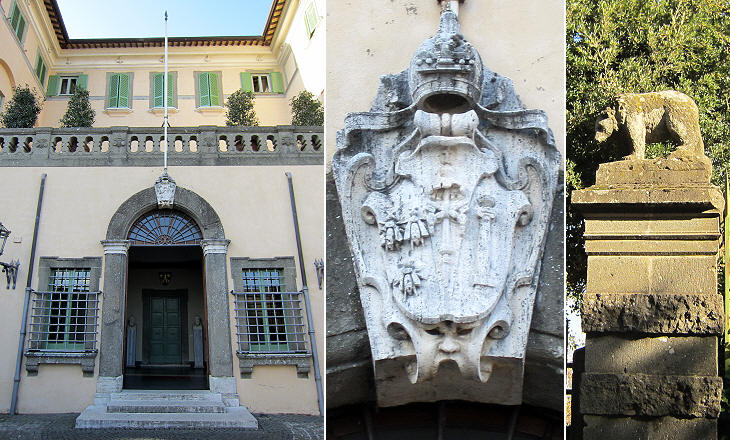 (left) Villa Barberini; (centre) coat of arms of the Barberini Colonna; (right) statue of a bear, a symbol of the Orsini, at the entrance of a property along Galleria di Sopra

The privilege of extraterritoriality applies also to a villa which belonged to the Barberini who decorated it with bees, their heraldic symbol (which is shown in the image used as background for this page). The villa was owned by Taddeo Barberini, nephew of Pope Urban VIII. In 1627 he married Anna Colonna and two years later he bought the fiefdom of Palestrina from his wife's family. 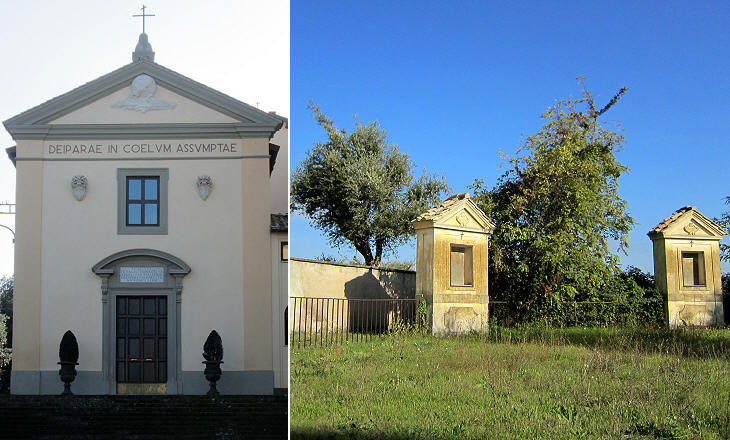 Pope Urban VIII founded Collegio di Propaganda Fide to coordinate the missionary efforts of the Roman Catholic Church in the world. The institution had a detached college at Castelgandolfo in a former Franciscan monastery with a small church along Galleria di Sopra. In January 1944 Allied forces landed at Anzio with the objective of accelerating the seizure of Rome. The Germans moved two Krupp K5, heavy railway guns, to the railway linking Rome to Albano and were able to shell the Anzio beachhead; the guns were hidden inside a tunnel between Castelgandolfo and Albano when they were not utilized. This led to repeated Allied bombings of Albano; many inhabitants fled to the college at Castelgandolfo which enjoyed extraterritorial status, but on February 10 the building was bombed causing more than 500 victims.

Next step in your tour of the Environs of Rome: Ariccia