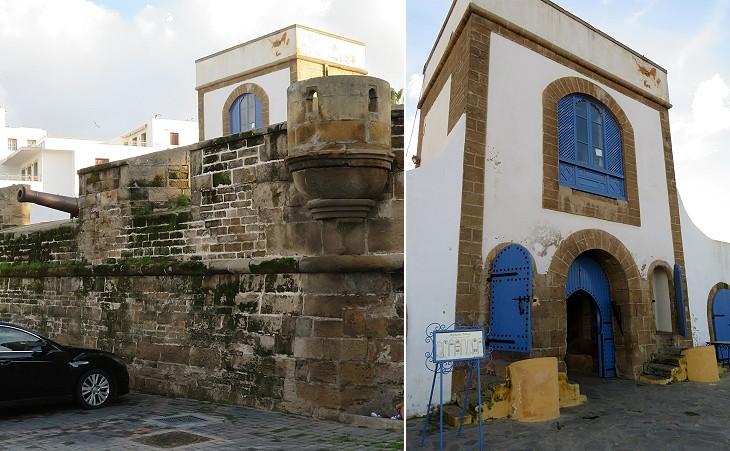 This famous towne was built by the Romans upon the Ocean sea shore, (..) westward of Rebat fortie miles. The citizens thereof were most civill and wealthie people: the fields thereto adioyning are exceeding fruitfull for all kinde of graine: neither doe I thinke, that any towne in all Africa is for pleasant situation comparable thereto. (..) In olde time it was fraught with stately temples, rich warehouses and shops, and beautifull palaces: which the monuments as yet remaining doe sufficiently testifie. (..) They have alwaies had great traffique with the Portugals and the English. Likewise they have many learned men among them. Howbeit two reasons are alleaged of the destruction of this towne: first, because they were too desirous of libertie; and secondly, for that they maintained certaine gallies or foistes, wherewith they daily molested the Island of Cadiz and the Portugals. Wherefore at length the king of Portugall sent a strong navie of fiftie sailes against them, the consideration whereof strooke such terrour into the inhabitants, that taking such goods as they could carrie, some fled to Rebat, and others to Sela, and so their towne was left naked to the spoile of the enemie. The Generall of the kings fleete (..) conducted his soldiers into the citie, which in one daies space they so defaced, burning the houses, and laying the walles even with the ground, that untill this day it hath remained voide of inhabitants. My selfe being in this place, I coulde scarce refraine from teares, when I seriously beheld the miserable ruine of so many faire buildings and temples, whereof some monuments are as yet extant. (..) This place is fallen into so great desolation, as I utterly despaire, that ever it will be inhabited againe.
Leo Africanus - The history and description of Africa: and of the notable things therein contained - 1526 - 1600 translation by John Pory
The Portuguese rebuilt the town in 1575 and renamed it Casa Branca. They abandoned it after the 1755 earthquake which destroyed Lisbon. 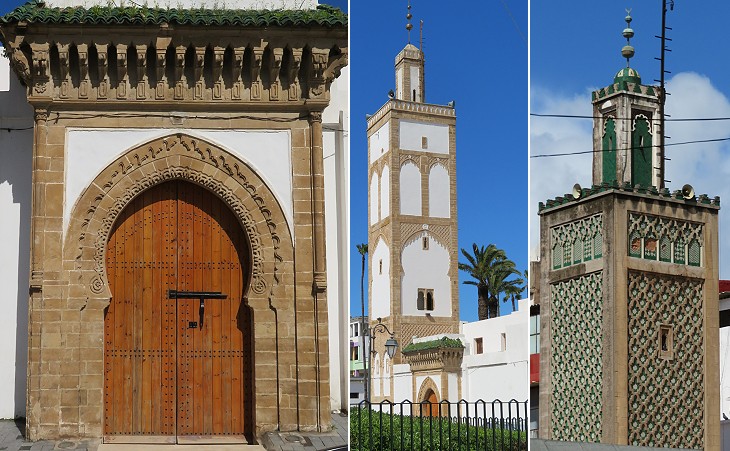 Viewed from the sea, its compact-looking walls, batteries, and couple of minarets, give it a respectable appearance; but, inside the walls, it is the dirtiest, most tumble-down place ever seen.
Arthur Leared - Marocco and the Moors - 2nd edn. 1891 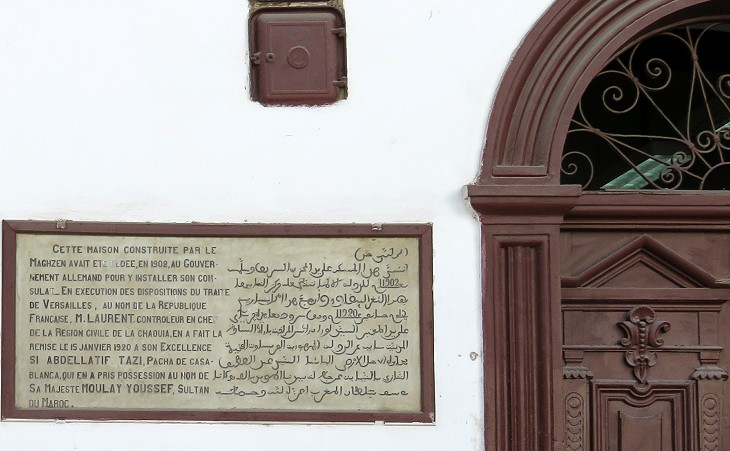 Plaque at the former German Consulate

Some of the Consulates are substantial buildings, but most of the other houses are in bad repair. Leared
In 1830 the Sultan decided to open the port of Casablanca to trade with Europe and the main countries opened consulates in the town which began to grow in population and importance. Competition between France and Germany for having a greater say on Moroccan matters led to the 1906 Conference of Algeciras in which the Sultan of Morocco had to accept international control over the way he handled policing and customs. The Conference called for the construction of a modern harbour at Casablanca by a French company. In 1907 a tribe reacted to the French growing presence at Casablanca. Some Europeans were killed and the French navy bombarded the town causing thousands of deaths. Eventually in 1912 the Sultan accepted the French Protectorate over central and southern Morocco and that of Spain over the northern part of the country. 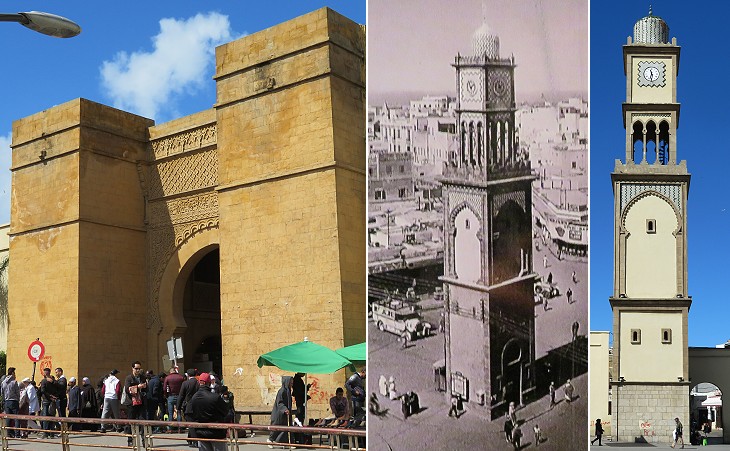 (left) Bab Jedid (New Gate); (centre) clocktower which was erected in 1908 at the entrance to the Moroccan town; (right) its replica which was built in 1994

The French rebuilt Casablanca and gave to the neighbourhood where the Moroccans lived a more monumental aspect by erecting a gate in Moorish style, similar to those built by the Almohads at Rabat.
Marshal Lyautey, first French Résident Général made of Casablanca the administrative and trade centre of the country. The town did not have a historical/religious significance and did not house a palace of the Sultan, which made it easier for Lyautey to build Ville Nouvelle, a modern European-looking town (see some of its buildings in the introductory page). Notwithstanding its importance as the main city of Morocco, Casablanca would not be as widely known as it is, had its name not been associated with one of the most popular Hollywood movies. The authors of the play upon which the movie was based never visited Casablanca and the film was shot in the Warner Bros. studios near Los Angeles. The choice of Casablanca had to do with the particular political situation of the town in December 1941, prior to the U.S. declaration of war on Japan. The Protectorate of Morocco was under the civil jurisdiction of the French Vichy government which the U.S. recognized until 1942. This made of Casablanca a nest of spies and intrigues, in addition to being an exotic location. The play itself is entirely fictional, yet tourists visiting Casablanca are not let down and they can spend an evening at Rick's Café and hum You must remember this, a kiss is still a kiss. 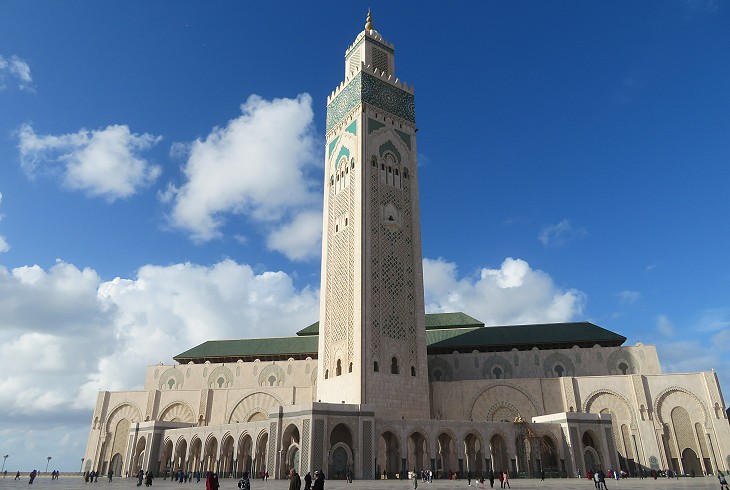 In 1956 the French/Spanish Protectorate came to an end. Casablanca was the largest city of the country, yet it lacked a real Moroccan character. In 1980 Sultan Hassan II decided to build a very grand mosque on a terrace by the sea, which would be a symbol of modern Morocco. It was designed by French architect Michel Pinseau and it was completed in 1993. 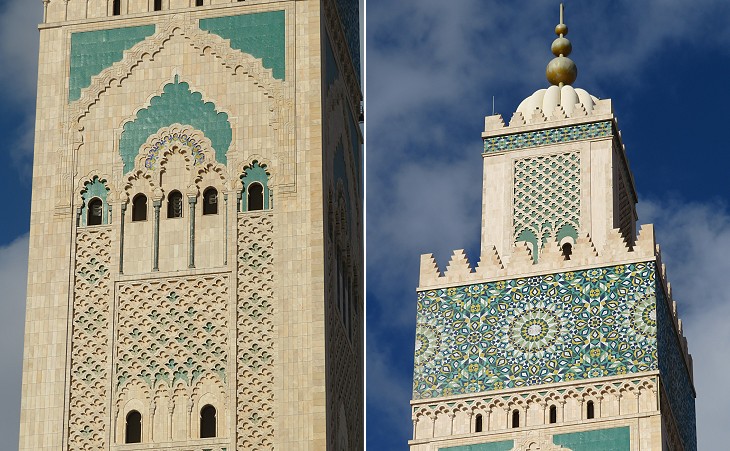 The building was meant to be a summary of Moroccan architecture and it does achieve its objective. The minaret is the main feature of that style and its design derives from those built by the Almohads towards the end of the XIIth century at Seville, Rabat and Marrakech. The great historical Moroccan mosques are buried in a maze of narrow streets and do not have a proper façade and Pinseau did not attempt to create something which did not exist. Another feature of Moroccan mosques is the lack of domes, which instead characterize Ottoman, Mameluke and Persian buildings (and even Norman-Arab ones). 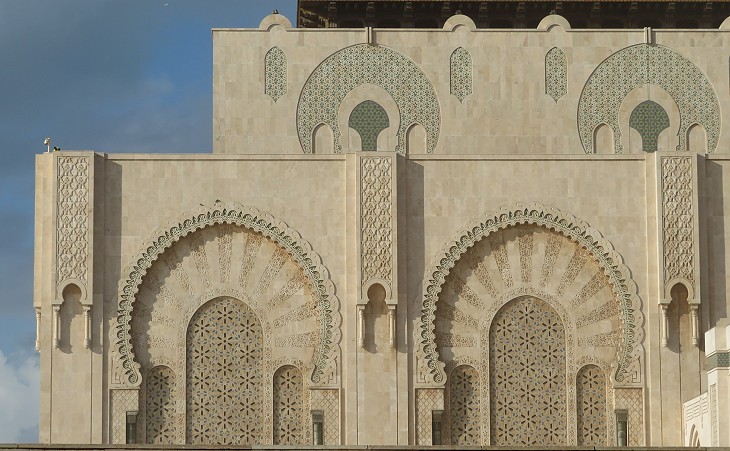 Hassan II Mosque: horseshoe arches which are typical of the architecture of Moorish Spain and of Morocco; another detail of the decoration can be seen in the image used as background for this page