Ancient Rome became a cosmopolitan city when Augustus consolidated the empire and granted it a long period of peace. A visit to Ancient Ostia shows how many different communities lived side by side until the end of the Vth century. Rutilius Claudius Namatianus, a poet who came to Rome from Southern France at the beginning of that century chanted the unifying role of the city with these verses:

Rome returned to be a cosmopolitan city towards the end of the XVth century; the number of churches belonging to a "nation" is an indication of how many foreigners were attracted to Rome. (left) Piazza Vittorio Emanuele II and S. Maria Maggiore in the background; (right) sculpture by Mario Rutelli which was initially placed at the centre of Fontana delle Naiadi

In 2009 the number of foreigners living in Rome was estimated in the region of 10% of the total population; foreigners live in all the districts into which Rome is divided, but the area around Piazza Vittorio Emanuele II has become a meeting point for them. 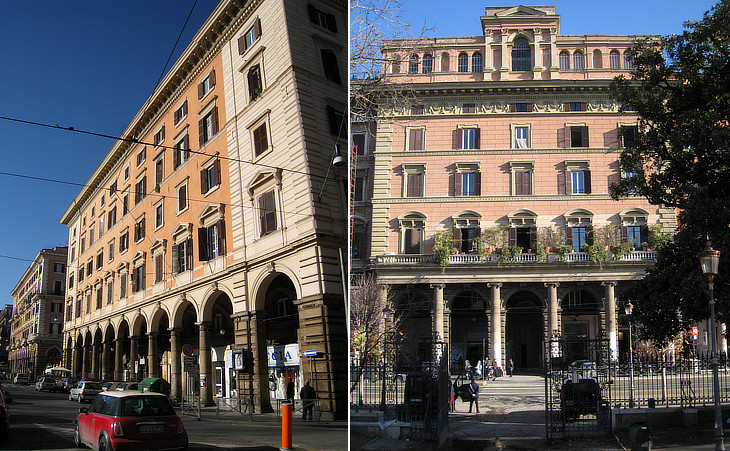 , an imperial residence which stood on the site of the square)

This neighbourhood was developed after 1870 when Rome became the capital of Italy; its buildings were designed according to patterns which are typical of Turin, from which the king and many high level politicians came. It was meant to be a medium class district, but eventually it lost appeal; until the 1970s there were many shops and in general they sold their goods at rather low prices; this however was not enough to keep them in business. Rents went down and the same occurred in the large apartment blocks which surround the square. This situation attracted many foreign workers, especially from China and India/Pakistan/Bangladesh. 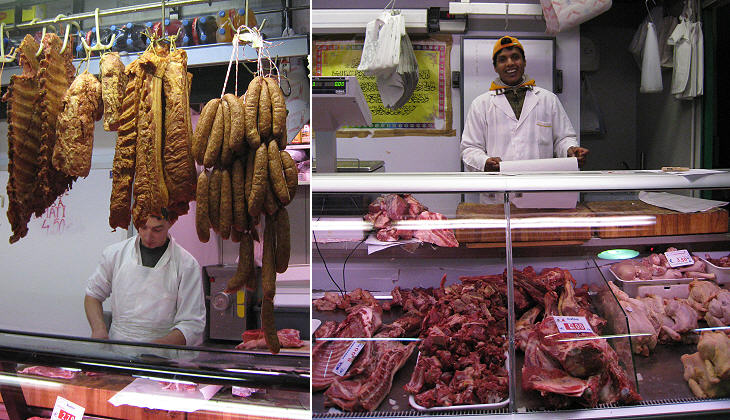 The gardens of Piazza Vittorio (the Romans tend to omit Emanuele II) were surrounded by a very busy market, which was recently relocated inside two former barracks.
Here, side by side, one can see butchers selling pork sausages and others who strictly follow the Muslim rules for slaughtering (halal). 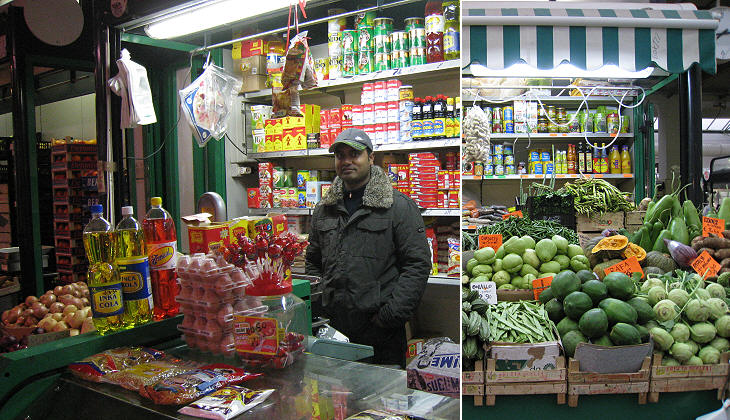 Many market stalls cater for an international clientele, not just for the community to which the owner belongs; in the image on the left a Bangladesh shopkeeper has in store bottles of Inka Cola, which is a soft drink with a flavour similar to bubblegum, or a banana cream soda, that is made in Peru. Tropical vegetables are sold together with those which are typical of Roman cooking. The various communities tend to live in peace; the hardship of life in a foreign country, the sharing of the same difficulties, the quest for being granted appropriate rights leads to friendships which do not follow historical traditions; celebrations typical of a specific community see the participation of members of other communities; so a Bangladesh citizen can be the animator of a Chinese lion. 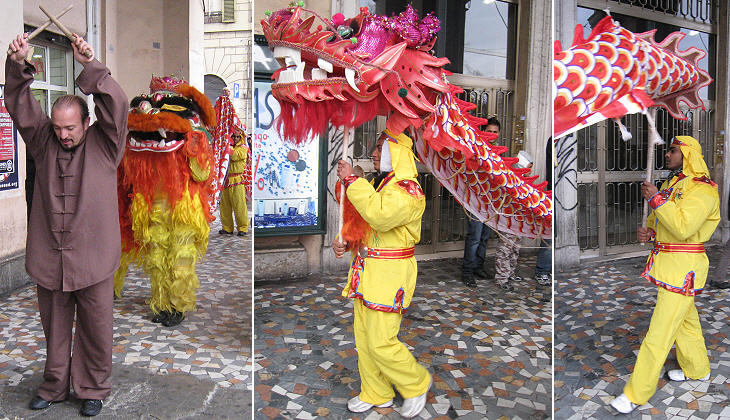 Celebrations for the 2009 Chinese New Year (2): a procession is opened by an Italian master of kung fu

The emblem of this neighbourhood is "L'Orchestra di Piazza Vittorio", an orchestra with musicians from eight different countries. The number of foreign women is higher than that of men, this because many middle-aged ladies came from Ukraine, Russia, Sri Lanka and South America to give assistance to old Italians. 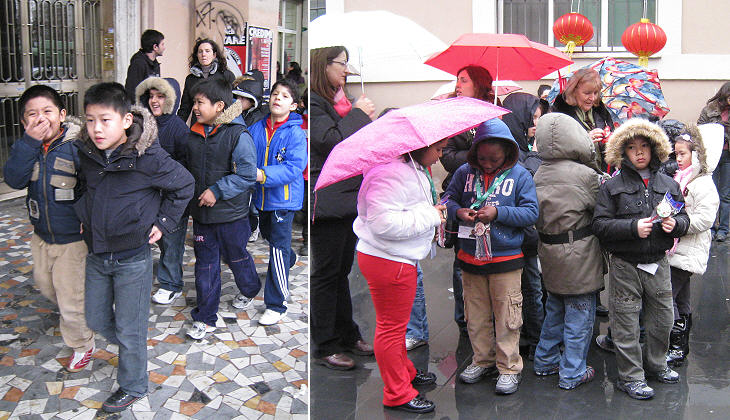 The management of the primary school near Piazza Vittorio has adjusted its calendar to its multi-ethnic pupils. The Chinese New Year is not a public holiday in Italy, so children have to go to school, but their teachers accompany them to see the celebrations. This is a minor thing, but enough to make them happy.
Italian is the "lingua franca", the common language which allows the members of the various communities to communicate with each other. The second generation speaks a very fluent Italian; even Chinese pupils seem not to have difficulties with the strong "r" which characterizes the inflection used by Romans. 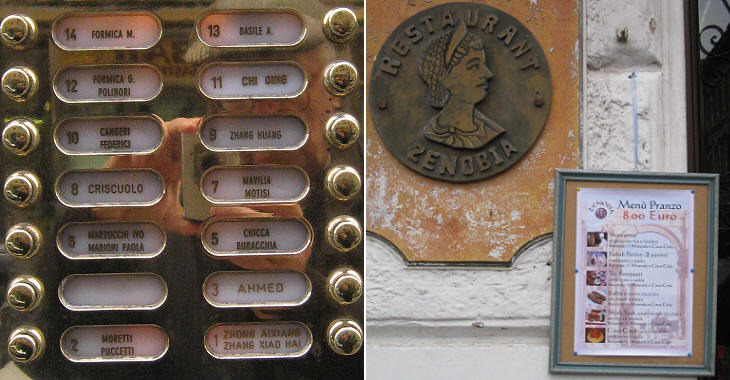 Usually the many ethnic restaurants near Piazza Vittorio have names which recall their country of origin such as "the Pyramids", "Ali Baba's Cave", "At the Red Lantern". The Syrian owner of a restaurant has chosen a more elaborate name which shows the desire to lay a bridge between his native country and that where he lives now. Zenobia is the name of the Queen of Palmyra (in today's Syria) who in 269 AD challenged the power of Rome in the Near Est. She was defeated by Emperor Aurelian who brought her to Rome; she followed (tied with golden chains) the chariot of the winner. According to the traditional account she was subsequently freed and granted a pension and a villa near Tivoli, where she lived happily for the rest of her life. 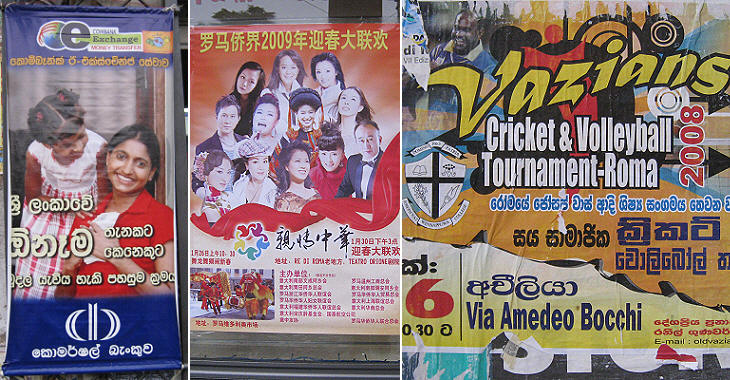 Until the 1960s the balance of payments of Italy relied strongly on the remittances sent home by nationals who worked abroad; today a steady flow of euro reaches the four corners of the globe from Italy; several companies advertise their services for handling remittances abroad; other posters announce shows and matches which depart from the Italian tradition; migrants from the Indian subcontinent are fond of cricket, a sport almost unknown to Italians, and are now trying to set up tournaments. 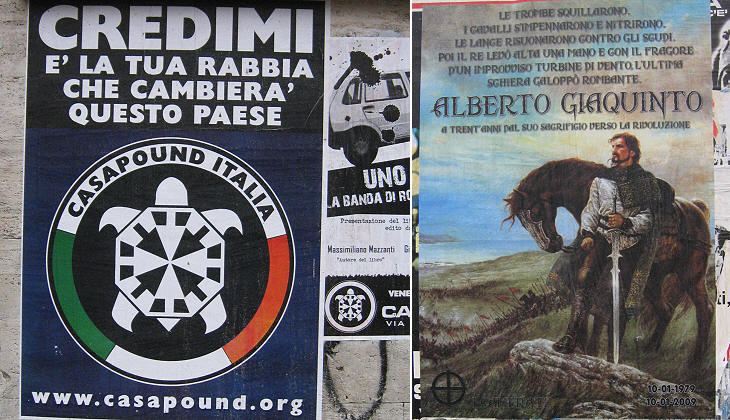 The arrival of so many foreigners worries many Italians; some foreign communities are seen as more inclined to crime than the locals; when a foreigner is involved in a rape, in an accident caused by a drunken driver or in a robbery this stirs a lot of fear and anger.
These feelings are exploited for political purposes. Hate based on race, religion, sexual orientation is a monster with a thousand heads; in the posters shown above hate is thinly veiled by references to poems and novels.

Other Days of Peace pages:
A Sunny Day in Villa Borghese
At the Flea Market
At the Beach
Voicing Your Views ..... and feeling better
Christmas in Rome
Eating Outdoors
Celebrating the Foundation of Rome
A visit to Roseto di Roma
The procession of La Madonna de Noantri
Running the Marathon
Watching the Parade
Finding Solace at the Protestant Cemetery
Attending 2007 July Events
Rome's Sleepless Night
Attending Winter Ceremonies
Jogging at Valle delle Camene
Sailing on the River to see the Bridges of Roma
An October Outing to Marino
A Special Spring Weekend
Embassy-hunting in Parioli
Attending a Funeral ...and enjoying it!
Celebrating Eritrean Michaelmas in Rome
Visiting Rome at Dawn
Visiting Rome in the Moonlight
Visiting Rome on a Hop-on-Hop-off Bus
Baroque Fireworks
Playing in the Snow at the Janiculum
Watching the Pride Parade
Reading Ovid at St. Peter's
Reading Memoirs of Hadrian at Villa Adriana
Visiting the Movie Sets at Cinecittà
Looking up at the Ceilings of the Vatican Palaces
Spending the Last Roman Day at St. John Lateran's Cloister
Reading Seneca at Caracalla's Baths
Walking the Dog at Valle della Caffarella
Keeping up with new discoveries at Museo Ninfeo