You may wish to read an introduction to the history of Venetian Crete and a page on the fortifications of the town first.

Because of its shallow waters the port of La Canea is not suited for today's ships: ferries from Piraeus and cruise ships call at a modern harbour in Souda Bay. This has helped in retaining the historical aspect of the town inside the walls with the exception of Castel Vecchio (Kasteli) which was bombed during WWII. 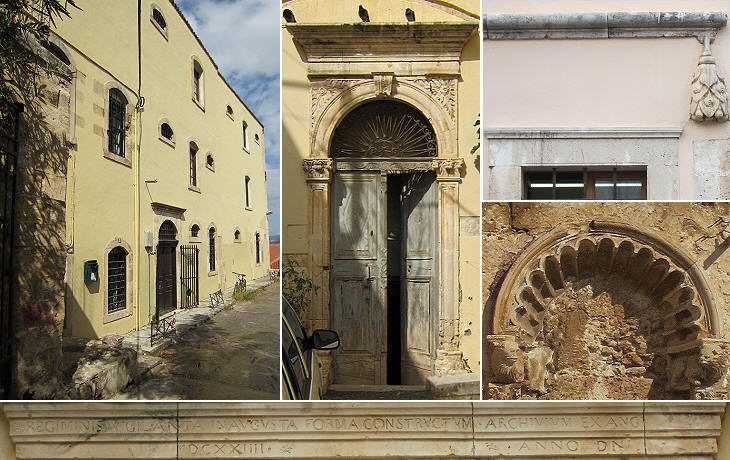 (above) Details of Castel Vecchio, the oldest part of the town; (below) 1624 inscription above the entrance to the Venetian archives

In 1574 Giacomo Foscarini was appointed provveditore (governor) of the island and in a report he prepared for the Venetian Senate he illustrated how the behaviour of the local noblemen and the policies implemented by his predecessors had vexed and alienated the Greeks. Historians agree that during the XVIIth century relations between Venetians and Greeks improved as well as the local economy, leading to a Cretan Renaissance in poetry and painting. At La Canea this period was marked by the construction of palaces, churches and port facilities and by the expansion of the town outside the old settlement of Castel Vecchio, which remained the seat of the Venetian administration. 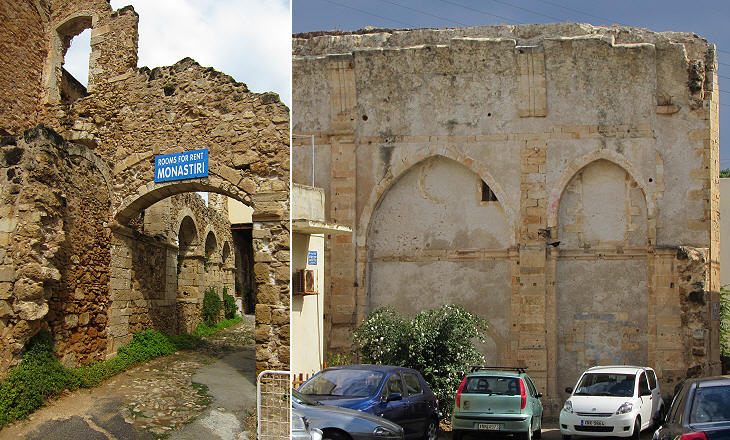 The church on an advanced ground within the castle seems to have been the cathedral called saint Mary's.
Richard Pococke - A Description of the East and Some Other Countries - 1745.
Castel Vecchio housed S. Maria dei Miracoli, the main church of La Canea; the same name as a fine church in Venice. The bombs spared a section of the adjoining monastery which today houses a small hotel. Overall Castel Vecchio has completely lost its former importance. 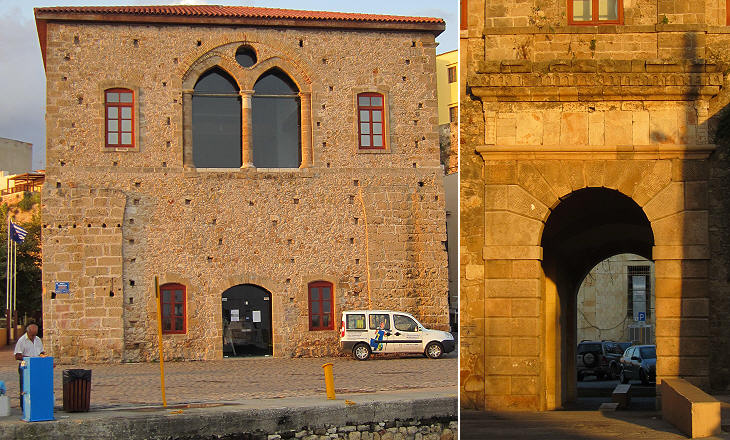 (left) Custom House seen from the harbour; (right) entrance on one side

The trade is much greater here than at Candia, it lying so convenient, for the Morea, Italy, and other places. The French have a great trade for oyl, wools, wax, cheese, and several other commodities, having a Consul, and two Merchants. The Venetians have also a Consul, but most of their oyl is shipped off from Suda, to which place it is brought from Retimo and other places thereabout.
Bernard Randolph, b. 1643. The present state of the islands in the archipelago.
The English having very little trade this way, the consul's is the only English house on the island, but the French merchants are numerous; the chief trade consists in sending oyl of olives to France to make soap, and for working their cloths; they export also a small quantity of silk, wax and honey, into the Archipelago, and wine to all parts of the Levant, which is very strong and cheap. Pococke
The finest remaining Venetian building is located at the foot of Castel Vecchio along the harbour; it is known as the custom house, but in origin it was a very large shipyard hall and probably a storehouse too. 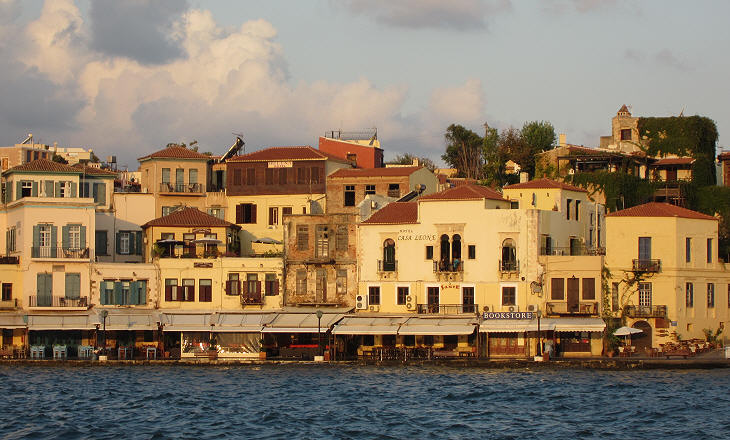 Venetian houses in the harbour

Round about the Port is a broad key, which is always full with merchandize, and is little inferior to the Port at Marseilles. The houses are all very well built and not much batter'd. (..) No Greeks live within the City. Randolph
After the Ottoman conquest merchants went to live on the side of the harbour opposite Castel Vecchio in the houses abandoned by the Venetian families. The quarter eventually became the residence of the European consuls and in general of the foreigners living at La Canea. The waterfront buildings retain the charm of the past. 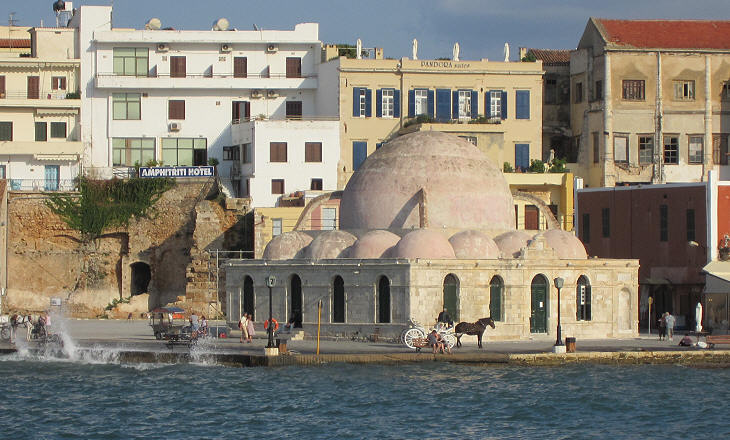 The pasha of the province of Canea resides here, who is the head ot the famous family of the Cuperlis, whose grandfather took the city of Candia. Pococke
We rapidly approached the city of Khania with its minarets towering above its other buildings and conspicuous from afar. The population is nearly six thousand souls, of whom the Christian and Jews amount to about the seventh part.
Robert Pashley - Travels in Crete - 1834
This mosque was the first Ottoman building of the town and it was dedicated to its first Ottoman governor, but over time it became known as the mosque by the waterfront. Its minaret was pulled down in 1923 when the last Muslims left the island as part of a large exchange of population between the Kingdom of Greece and the Republic of Turkey. 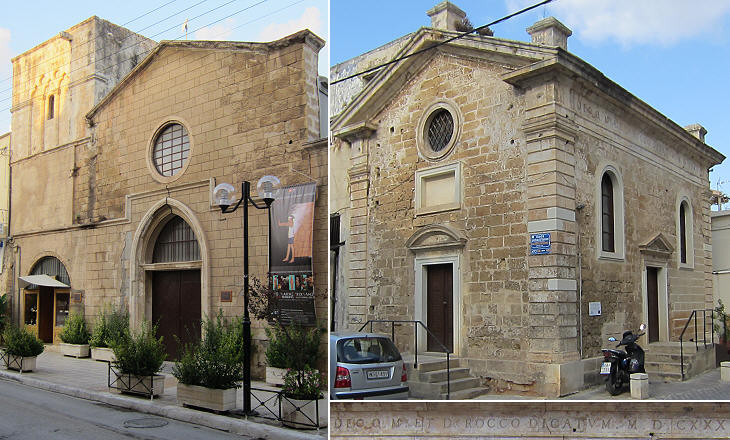 It is a neat town, the buildings being almost all Venetian; most of the mosques are old churches, of which together with the chapels, there were twenty-five; one particularly belonged to a large convent of Franciscans. Randolph
The capuchins of the mission have a small convent here, and are chaplains to the French nation. Pococke
S. Francesco and the adjoining Franciscan monastery were built in the XVIth century along the main street of La Canea outside Castel Vecchio. The church was turned into a mosque and later on into a cinema; today it houses a small archaeological museum.
The inscription on the side cornice of S. Rocco indicates that this small church was built in 1630, probably to thank St. Roch for his intercession during a plague. After the Ottoman conquest, a large part of the Greek population of La Canea converted to Islam, mainly to acquire some practical advantages; these new Muslims were all but zealots and foreign travellers reported that they customarily drank wine. Christian inscriptions such as that of S. Rocco were not erased. 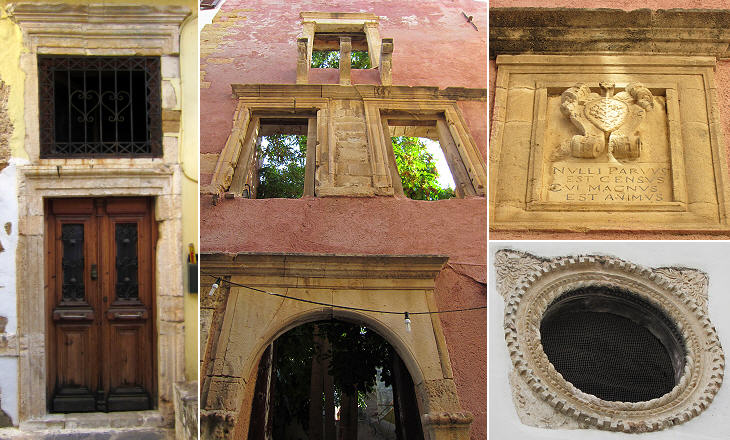 (left/centre) Details of Venetian buildings; (right-above) Venetian coat of arms and a Latin saying by St. Anselm of Canterbury (never is poor he who has a great heart); (right-below) rose window of Etz Hayyim Synagogue

All the Turks who are inhabitants of the city, belong to one or other of the bodies of the soldiery, and those fit to bear arms are about three thousand; there are three hundred Greek families in the town, and only four or five Armenians, and about fifty families of Jews. Pococke
Topanas and Evraiki, the two quarters between the harbour and the western walls are the heart of the tourist shopping district with plenty of small restaurants and souvenir shops, but it is worthwhile paying some attention to the design of the buildings. Topanas is a reference to the Ottoman gunners who worked at the defence of the town (see Tophane-i Amire the cannon foundry of Constantinople). Evraiki was the Jewish quarter of the town. 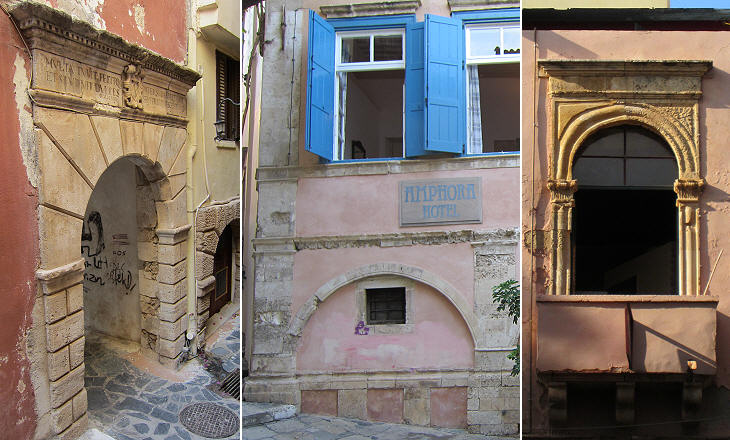 As I walked through the streets of Khanià, the period when Venice possessed the island was often recalled to my mind. The arches seen in view of the port were designed for Venetian galleys; and coats of arms are still observed over the doorways of some of the principal houses. Pashley (above) Palazzo Renier 1608 inscription; (below) another Venetian lintel

The inscription on the portal of Palazzo Renier is rather puzzling: the first line is a quote from Horace - Ars Poetica (CCCCXII) where "pater" (father) replaced "puer" (young athlete). In the translation by Henry James Pye:
A youth, who hopes, th'Olympic prize to gain
All arts must try, and every toil sustain;
th'extremes of heat and cold must often prove
(And shun the weakening joys of wine and love).
The landlord turned the quotation into a celebration of the efforts he made to build the palace. 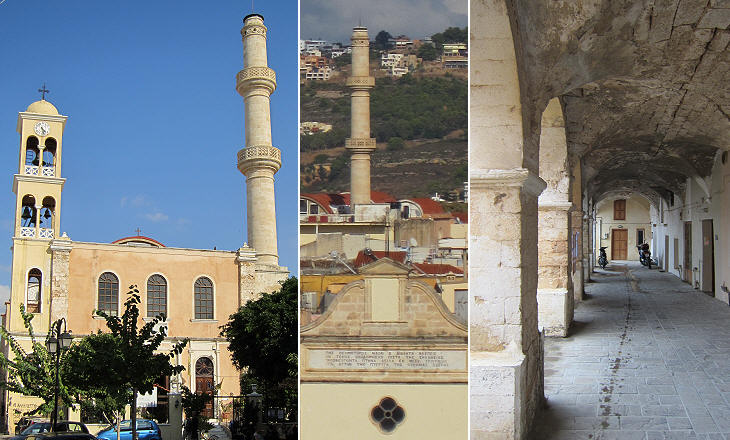 (left) S. Nicola; (centre) the minaret seen from the walls; (right) portico of the Dominican monastery

The Dominicans had a large monastery in Splantzia, a quarter mainly inhabited by Muslims during the Ottoman rule. The church was converted into a mosque and a very tall minaret was erected at its side. The building became a Greek Orthodox church after the Muslims left the town; a bell tower was built on the other side of the façade giving the whole building an almost ecumenical appearance. The large courtyard of the monastery is still identifiable although the cells of the monks were turned into houses. 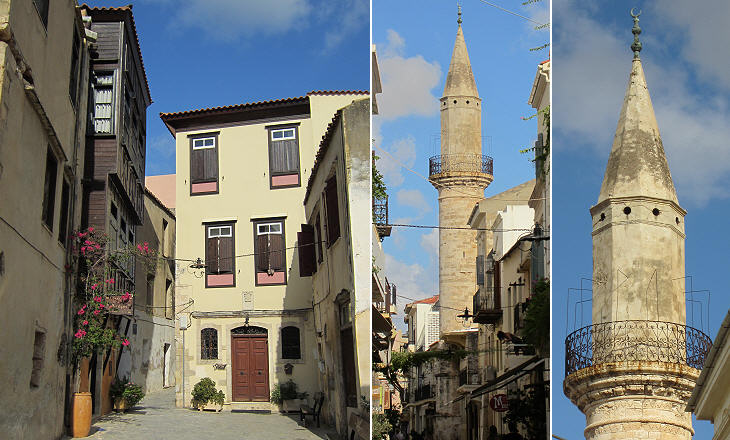 The appearance of the town was striking, as its irregular wooden buildings rose up the hill sides from the sea, interspersed with palm-trees, mosques, and minarets. There was no mistaking that we were in Turkey.
Henry Fanshawe Tozer - The islands of the Aegean Sea. Published 1890, but Tozer began his travels in 1874
The image used as background for this page shows a detail of a small Venetian fountain near the shipyards.

Return to page one: the Fortresses.