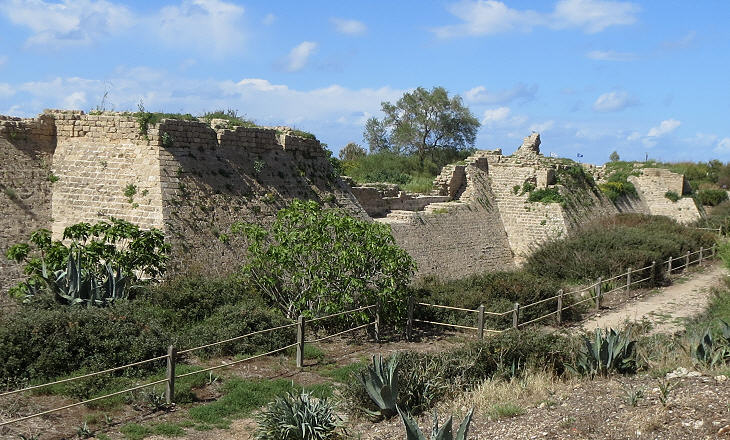 The walls of the town, which are now remaining, are said to have been built by Lewis the ninth, in the time of the holy war; they are of small hewn stone, and about a mile in circumference, defended by a broad fossee.
Richard Pococke - A Description of the East and Some Other Countries - 1745.
The medieval walls enclose an area 600 yards long by 250 yards broad, east and west. Thus Medieval Caesarea was less than a tenth of Roman Caesarea. (..) There was a covered way 13 feet wide behind the wall, and loopholes at a height above the revetment suitable for men standing in the covered way. (..) The fortifications thus described are among the most important Crusading remains in Palestine.
Claude Reignier Conder - The survey of western Palestine - 1883
The walls built in 1254 to strengthen the defence of the Crusader town mark the limit of the archaeological park. Its office provides only limited information on the monuments outside the walled town which include a hippodrome. They are situated in an area which has been developed by a private foundation, which acts as a municipality and has therefore great latitude of power. 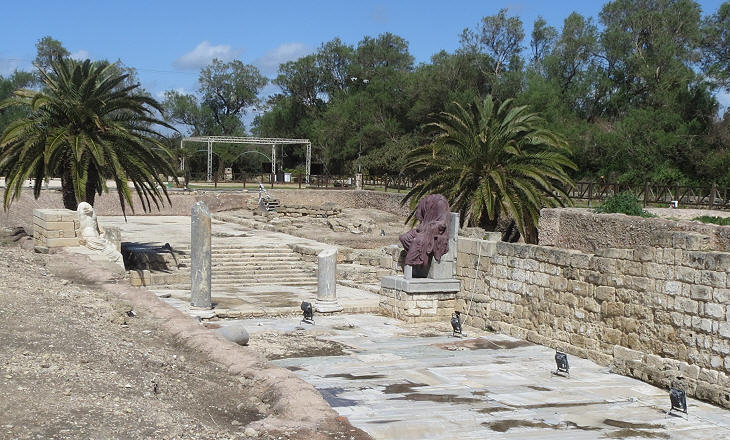 At a short distance from the walls archaeologists unearthed a cardo, a north-south street of Caesarea. The street was restored in the VIth century and it retains a mosaic with a celebratory inscription similar to that at Palladius Street in Scythopolis. 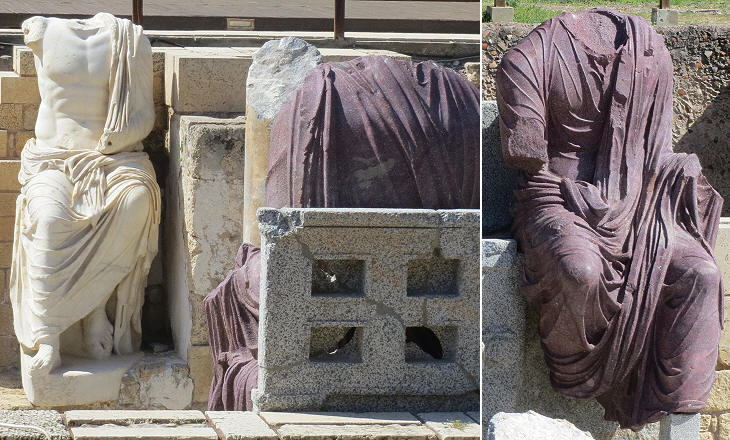 Two large statues were found when excavating the cardo; they have been placed one opposite the other as an embellishment to the street. They were probably removed from palaces or temples. Most likely they portrayed emperors; the white marble one depicted a deified emperor, perhaps Hadrian (see his statues at Antalya), the porphyry one an emperor holding a globe, the symbol of his power and sitting on a sort of throne, perhaps Diocletian or Constantine who regarded porphyry as a symbol of their status. 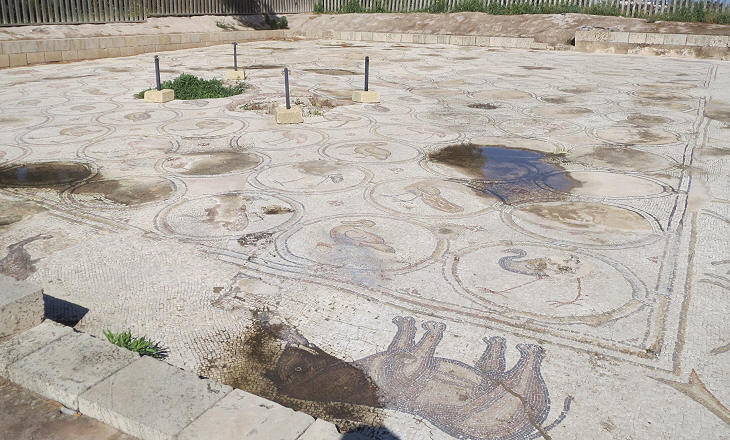 In the 1950s a VIth century mansion was identified half a mile east of the walled town. After a few years it was covered to avoid its deterioration. In 2005 the foundation which developed the neighbourhood excavated and restored the mosaic of the central courtyard of the mansion and designed a small public garden around it. 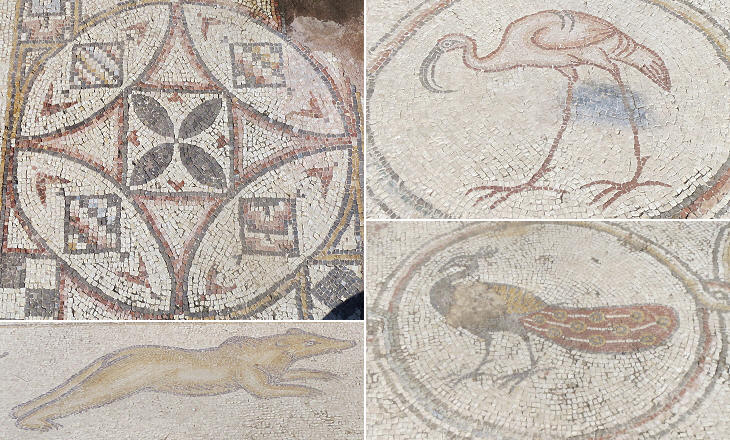 Birds inside medallions are portrayed in the central part of the mosaic, whereas wild animals (including the lion which you see in the image used as background for this page) are depicted in the frame. Birds and wild animals were a common subject for mosaics and they were often associated with Orpheus (e.g. at Philippopolis in Syria); when the portrayal of pagan gods and heroes was forbidden, the animals were depicted by themselves e.g. at the Villa of the Aviary at Carthage. 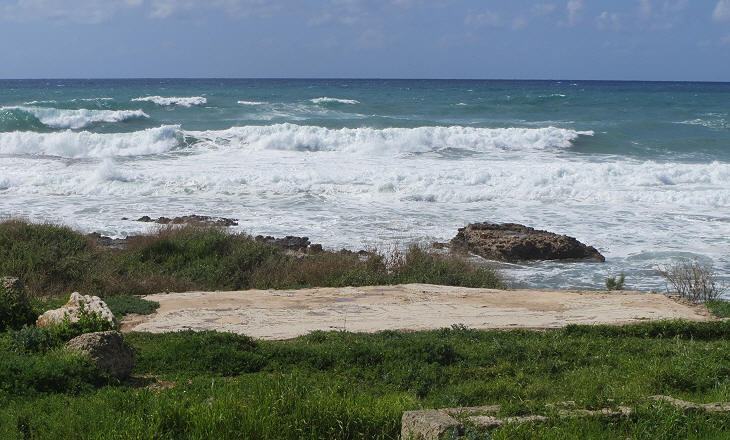 The desecration of a synagogue and the ensuing massacre of 20,000 Jews marked the beginning of the First Jewish Revolt (67-73 AD) according to Flavius Josephus. Some Rabbis regarded Caesarea as the frontier of Palestine and the town was held not to belong to the land of Israel, yet Jews lived there. A synagogue with a floor mosaic has been identified immediately to the north of the medieval walls on the edge of a small cliff. 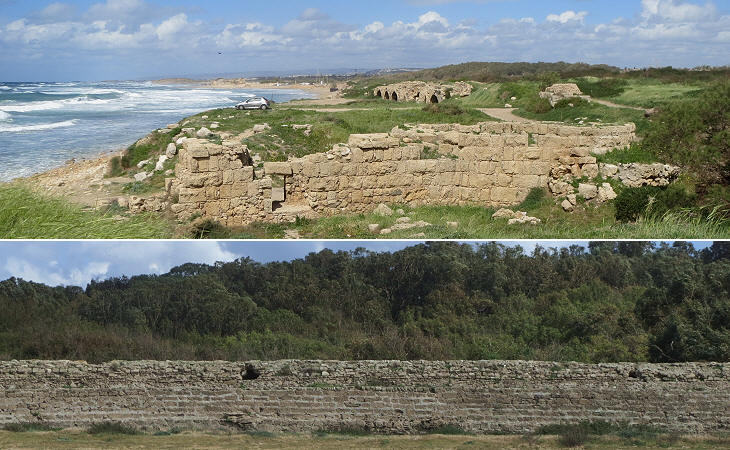 (above) Strato's Tower and Roman aqueduct in the background; (below) Byzantine aqueduct

The antient city extended further to the north than the present walls; for I saw a wall on the shoar, which I observed to run about half a mile to the north, near to some aqueducts. Pococke
The town was supplied with water principally from the two aqueducts, the low-level and high-level. Native traditions relate that these were both made by daughters of a king, for a wager to see who would first carry water to the city. (..) The High-level aqueduct is a more important work, and bears evidence of two periods of construction. (..) The aqueduct breaks off suddenly near the town. It seems in parts to have been repaired at a later period, possibly by the Crusaders. Conder
Strato's Tower was the name of a small settlement founded by the Phoenicians. It has been identified north of the medieval walls. The site looks rather abandoned, but it is very evocative with the view of the coastline and the ruins of an aqueduct built by Herod the Great and restored in the IInd century by the Romans. It ran too close to the coast and at one point part of it collapsed into the sea. A second aqueduct was built inland; it still provided Caesarea with water, but it was not that impressive. 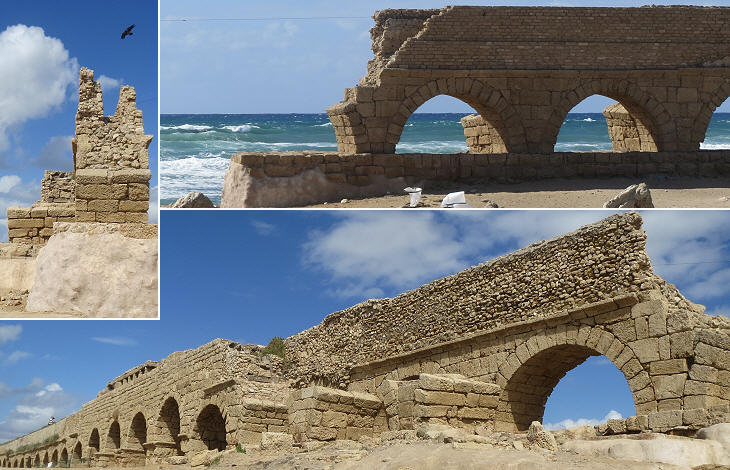 The aqueducts mentioned to the north, which might bring water from the river, run north and south: The lower aqueduct, which is to the east of the other, is carried along on a wall without arches, and of no great height. (..) This aqueduct, as well as the other, is almost buried in the sand. The other aqueduct, forty yards nearer the sea is built on arches; the side of it next the sea, is a rusticated work; but the east side is plastered with a very strong cement, probably to prevent any damage from the sands that might be drove against it. Pococke
The growth of Caesarea required additional water and two other sources were added to the initial one, so that the aqueduct had three conduits. These improvements were carried out by the legions which Emperor Hadrian stationed in Palestine after the Second Jewish Revolt (132-135). You may wish to see a page on Roman construction techniques.