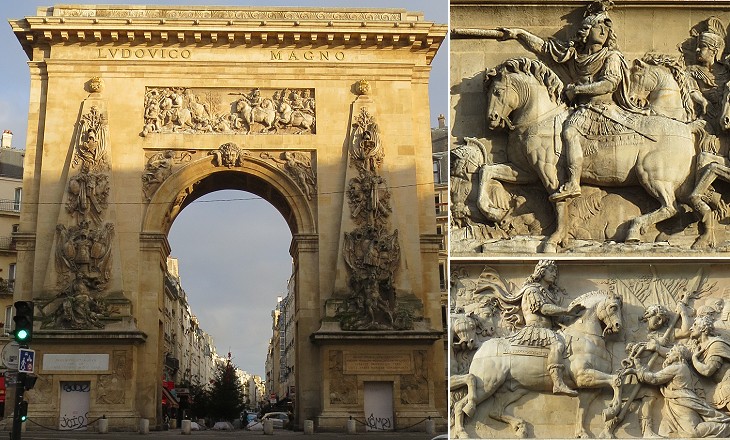 (left) Porte Saint-Denis (designed in 1672 by François Blondel); (right) details of its reliefs portraying King Louis XIV as a Roman emperor leading his troops across the Rhine and receiving the surrender of enemies

Ludovico Magno means "to Louis the Great", but today very few French refer to Louis XIV as a great military commander, although France was at war for more than 30 of the 54 years of his personal rule. Porte Saint-Denis was erected to celebrate his victories in the Low Countries against the Spaniards and the Dutch: an inscription on the right pillar makes reference to the crossing of the Rhine and the conquest of three provinces and forty walled towns. 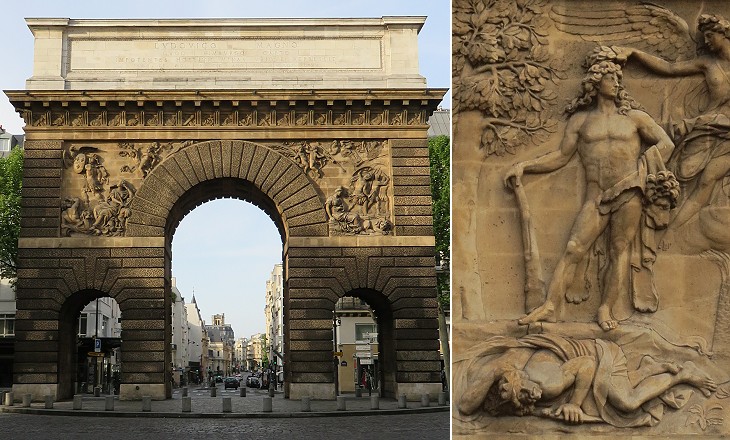 (left) Porte Saint-Martin (designed in 1674 by Pierre Bullet); (right) relief portraying King Louis XIV as Hercules in one of his Labours

This premise explains why he commissioned Gian Lorenzo Bernini an equestrian statue of himself as Phoibos Apollo in the costume of a Roman emperor. The request was most likely made in 1667, perhaps as a sort of compensation for not having implemented Bernini's Louvre project. 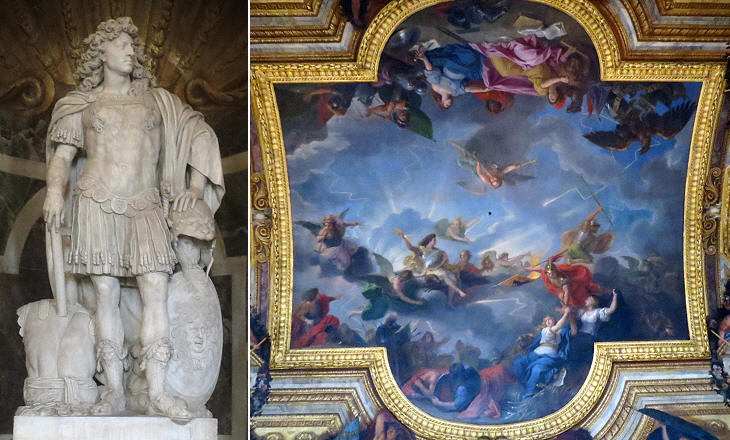 In the following years King Louis XIV continued to be involved in wars which were mainly aimed at expanding the French Kingdom eastwards. They came to a temporary end in 1678/1679 when a series of treaties were signed with the Dutch Republic, Spain and the Austrian Empire. In the meantime he commissioned the decoration of his new residence at Versailles to the best French artists who portrayed him as Phoibos Apollo or as a Roman emperor (or both). He mostly admired Emperor Trajan, who led the Roman Empire to its maximum extent, and Trajan de France was another of his epithets. 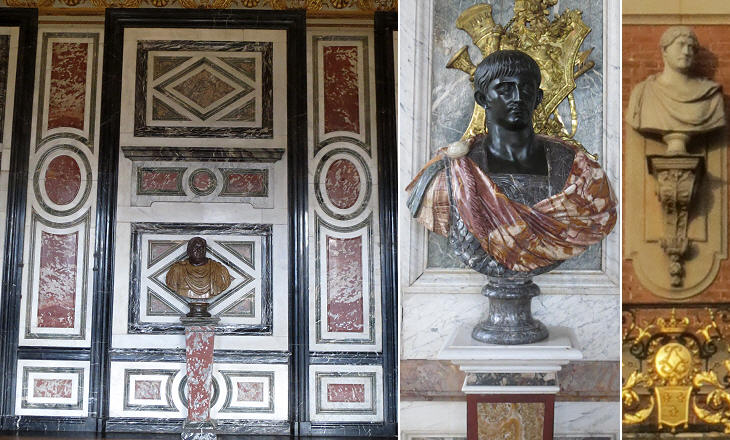 Decoration of Versailles with busts of emperors (left to right: Vespasian, Augustus and Hadrian) and coloured marbles

In addition to statues and paintings, other aspects of the decoration of Versailles such as the use of marbles, indicate that it was meant to be the residence of a modern Roman emperor. We can assume that until the early 1680s King Louis was still convinced he would be remembered as a great military commander. While King Louis XIV was busy with his wars and the construction of Versailles, the equestrian statue Bernini was commissioned made very slow progress. The King had requested Bernini to involve the students of his newly founded French Academy in Rome in its execution and had charged Colbert, his Minister of Finances and Royal Household to liaise with Bernini. 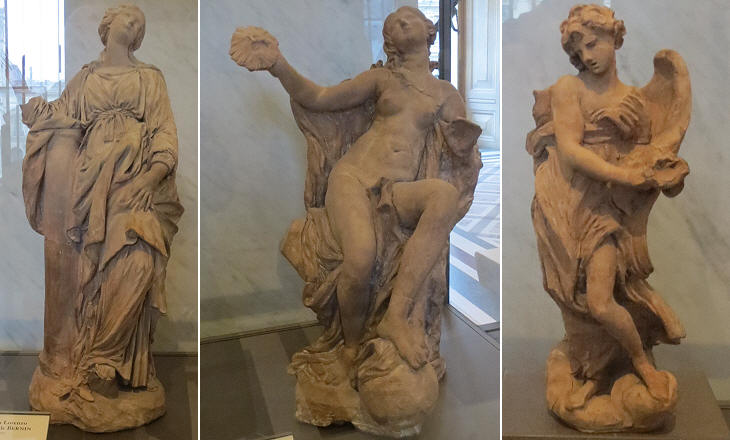 One may study the change from Constantine's horse to the similar horse of the equestrian monument of Louis XIV, or even from the authentic bozzetto (Borghese Gallery - it opens in another window), to be dated 1670, to the execution of the actual work, which was nearing completion in 1673, and it will be found that between the model and the marble there was a further and last advance in the dynamic ormentalization of form.
Rudolf Wittkower - Art and Architecture in Italy 1600-1750 Penguin Books 1958
Colbert agreed with Bernini's suggestion that the starting point for the new statue was to be that which Bernini had completed in 1668 for Scala Regia, the grand entrance to the Papal Palace.
Following his traditional working method Bernini prepared clay models of what he intended to do and sent them to Colbert for endorsement. The statue was completed by 1677. 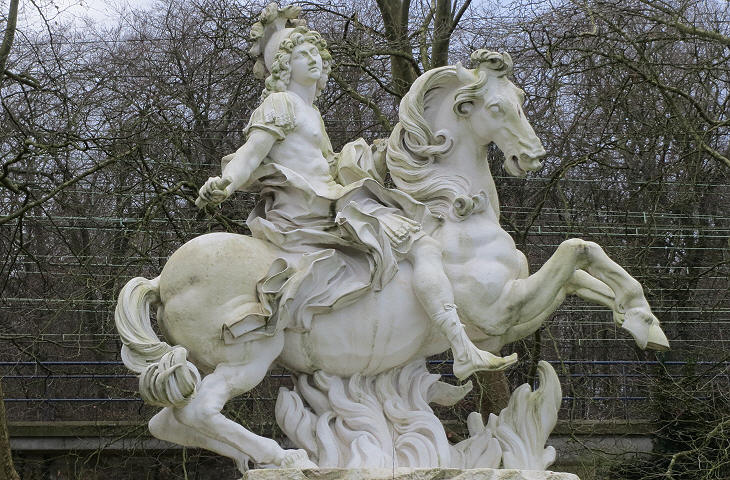 Both Bernini and Colbert were dead when in 1684 the statue reached Paris. It had been designed to be placed in a square of the city, but King Louis XIV decided to use it for the decoration of Versailles. The statue portrayed him as Phoibos Apollo in the act of climbing the Hill of Glory and leading an imaginary army, but the King was utterly displeased with the final result of Bernini's work.
Several causes are likely to have influenced the King's judgement:
a) he was now aged 46 and he did not identify himself with the young man of the statue;
b) in 1665-1670 the King had arranged for casts of Colonna Traiana to be made to be studied by the French Academy students; in 1672 he was dedicated a book of engravings depicting the whole column by Pietro Santi Bartoli. Trajan was portrayed sixty times in the reliefs, but never in the act of taking part in a fight (in most cases he delivers a speech to the troops) and the King might have thought it was no longer proper for him to be portrayed as actually leading his army;
c) relations with Innocent XI, the reigning pope, were extremely poor, because the latter supported the Austrian Emperor in his fight against the Ottomans, traditional allies of France, and this might have led to despising whatever came from Rome;
d) finally the execution of the statue was not without technical faults. 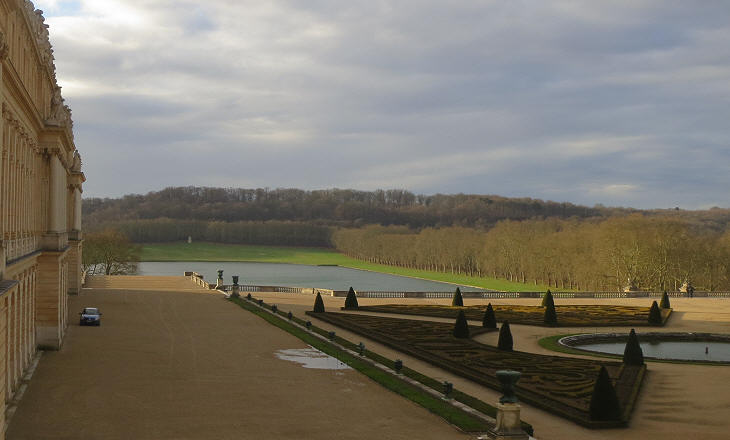 Bernini gave the Baroque equestrian statue with the rearing horse a heroic quality and invested it with drama and dynamic movement not only in his Constantine but also in the ill-starred monument of Louis XIV which stands now, transformed into a Marcus Curtius, near the 'Bassin des Suisses' in the gardens of Versailles. Wittkower
The statue was initially placed near one of the large fountains along the main axis of the gardens, but it was soon "exiled" to open ground which was used by Royal Swiss Guards for their training at the end of Pièce d'Eau des Suisses, a very large pond. Today the area is outside the Palace of Versailles premises. 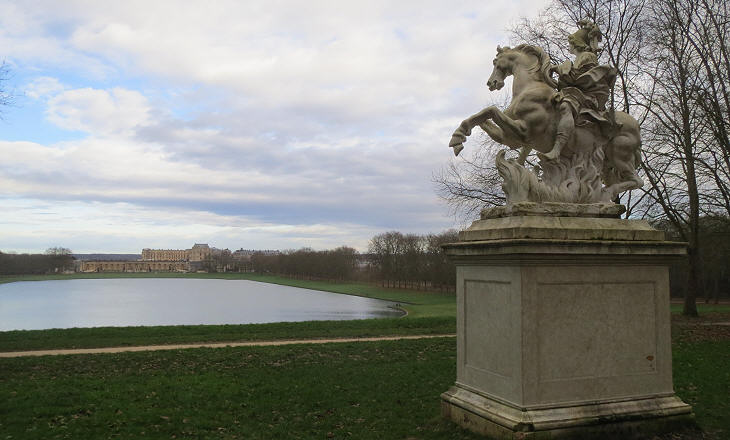 The palace seen from the statue

Because a statue of the King could not be placed in such an unassuming site, in 1687 François Girardon, a French sculptor, was asked to modify it in order to portray Marcus Curtius, a hero of the very early days of Rome. The rocks of the Hill of Glory became the flames into which the hero threw himself, a sort of Roman helmet was placed on the head, the long hair of the King was trimmed and some features of the face were modified.
In January 2014 the pedestal of the statue did not bear any inscriptions and the statue was not even mentioned in the information panel at the entrance to Pièce d'Eau des Suisses, now a public garden of the City of Versailles. 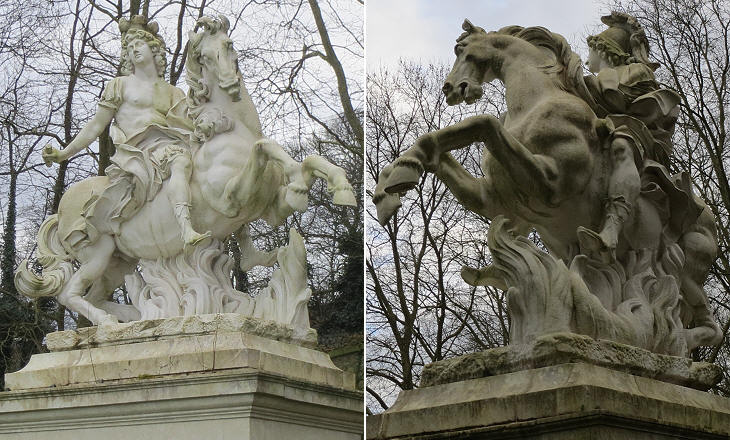 The statue has a principal view, but Bernini, believing it would have been placed in a square, ensured it had other interesting views by a torsion of the horse's head and tail and by a "wind effect" of the cloak. As a matter of fact some of these other views are better than the principal one. 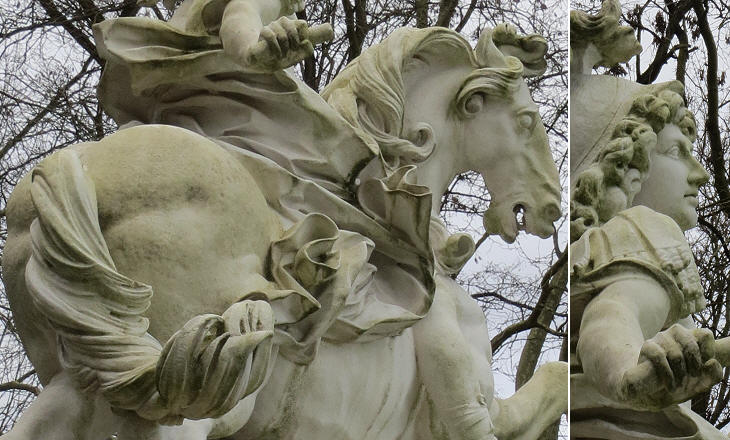 (left) The wind effect of the cloak; (right) how Girardon turned King Louis XIV into Marcus Curtius by reducing the size of the nose; the French still call "nez Bourbonien" a long and prominent nose similar to that of Louis XIV and other members of the Bourbon dynasty

Most statues of King Louis XIV in public places were destroyed during the French Revolution, but Marcus Curtius did not attract the devastating fury of the mobs. Yet, although it portrayed a Republican hero, the statue was not considered worthy of being made more visible.
The image used as background for this page shows a 1701 portrait of King Louis XIV by Hyacinthe Rigaud which has become the iconic image of le Roi-Soleil.

Return to Bernini in Paris (page one) or move to Epilogue (page three).