- page two
(detail of a drawing by Carlo Labruzzi) 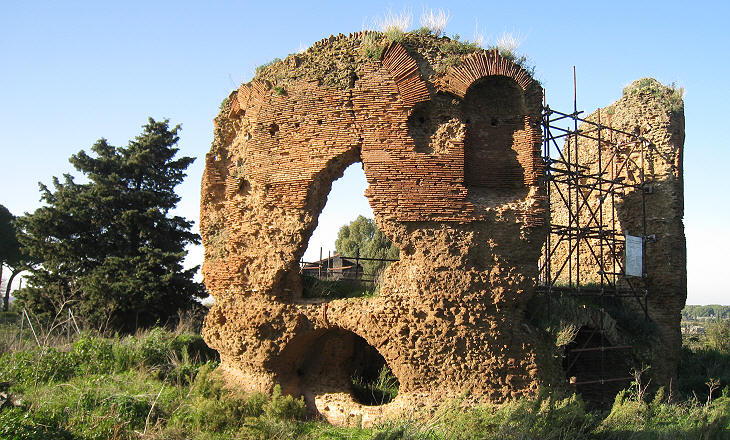 Aurelius Victor informs us that the tomb of Gallienus, in which was also interred the Roman General Severus, perfidiously strangled by order of Maxentius, stood at the ninth mile of the Appian way. (..) Half a mile farther on we meet a large circular monument, built of red brick, and adorned with niches internally and externally.
Rev. Jeremiah Donovan - Rome Ancient and Modern - 1843
This large brick monument is thought to be the tomb of Emperor Gallienus; it was surrounded by a porch. The tomb is located at the IXth mile of Via Appia near the site of the first mutatio, the staging post where mail messengers changed their horses. The image used as background for this page shows an isolated wall of this tomb. 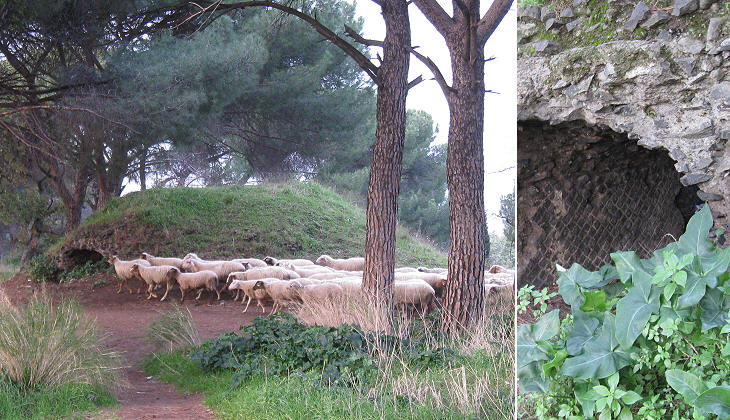 (left) A hidden tomb; (right) detail of the entrance in "opus reticulatum"

The mounds which flank this part of Via Appia Antica occasionally show the structure of the tombs which they hide; many of them were built in opus caementicium, a sort of concrete made up of flints and mortar; because the resulting walls were very solid, but not nice to see they were faced with square stones forming a diagonal pattern (opus reticulatum) (see a page on Roman construction techniques). 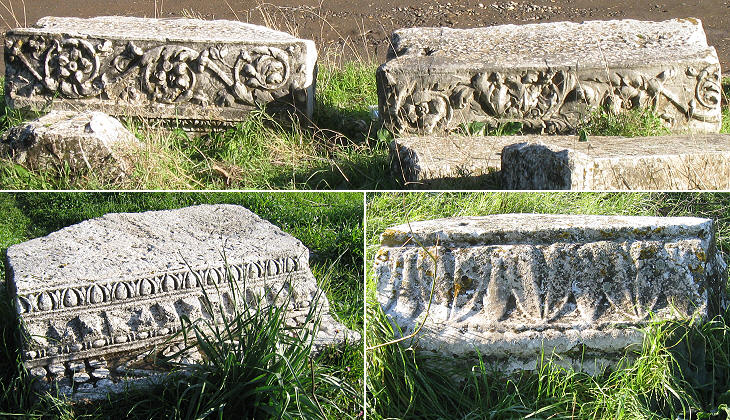 After crossing Via di Fioranello, which leads to the nearby Ciampino Airport, Via Appia Antica gets narrower and is unpaved. Fragments of monuments are scattered around rather than being arranged at the sides of the road.

A quarry which provided the flints used in the construction of many tombs has now become a training ground for Roman climbers.

The last section of Via Appia Antica is marked by the ruins of a tomb which has the size of a small hill. 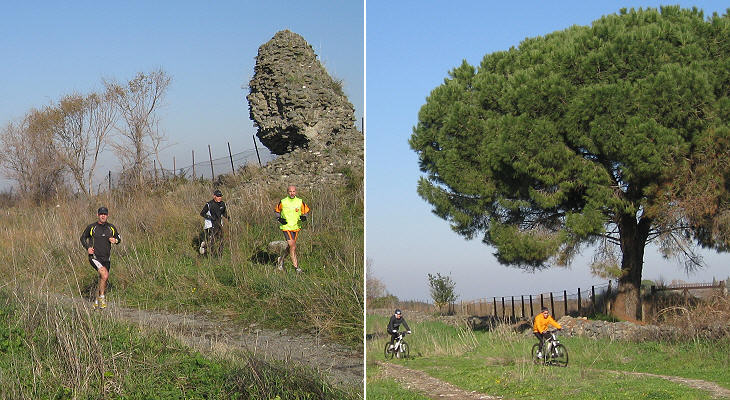 On Sundays many joggers and cyclists choose to run along the path from this large tomb to the end of Via Appia at Frattocchie, others choose Valle della Caffarella at the side of the initial section of Via Appia. 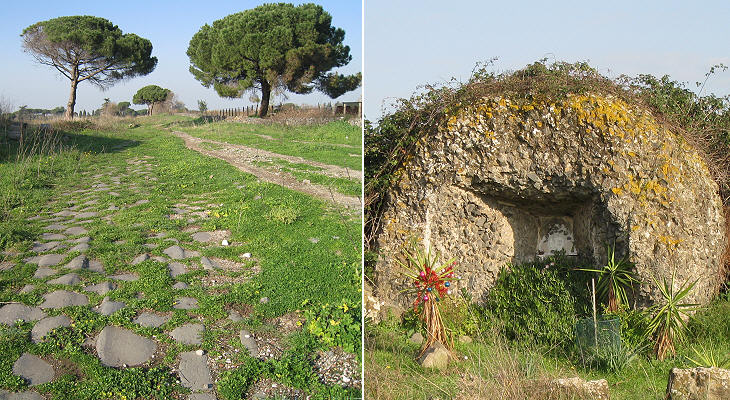 (left) Section of the ancient paving of the road; (right) a tomb turned into a chapel

Tombs and temples, overthrown and prostrate; small fragments of columns, friezes, pediments; great blocks of granite and marble; mouldering arches, grass-grown and decayed; ruin enough to build a spacious city from; lay strewn about us. Sometimes, loose walls, built up from these fragments by the shepherds, came across our path; sometimes, a ditch between two mounds of broken stones, obstructed our progress; sometimes, the fragments themselves, rolling from beneath our feet, made it a toilsome matter to advance; but it was always ruin. Now, we tracked a piece of the old road, above the ground; now traced it, underneath a grassy covering, as if that were its grave; but all the way was ruin.
Charles Dickens - Pictures from Italy - 1846 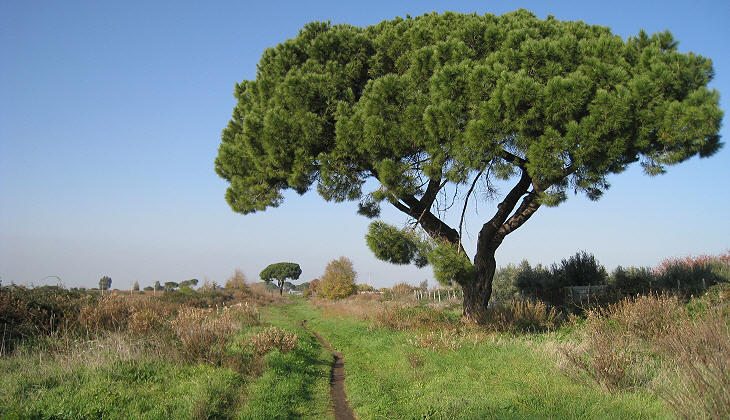 Last stretch of Via Appia Antica

Until a few years ago the very last stretch of Via Appia Antica was hardly inviting; one had to find his way through weeds and rubble and the ancient tombs were used as shelters by squatters. The images of this page were mainly taken in December 2009 and they show a much improved situation. 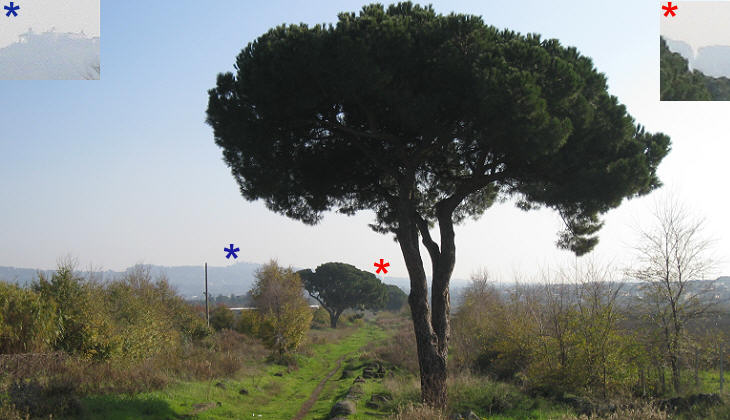 View towards the Alban Hills; in the insets Castelgandolfo (left) and Via Appia entering Albano (right)

To the left are remains of an ancient circular tomb, the last before we reach the modern road to Albano near the osteria delle Frattocchie, where the ancient as well as the modern road begin to ascend the clivus Albanus. Donovan
Via Appia was a straight line from Porta S. Sebastiano to Albano: in the picture above it is possible to notice Via Appia entering Albano a few miles from the location where the picture was taken. 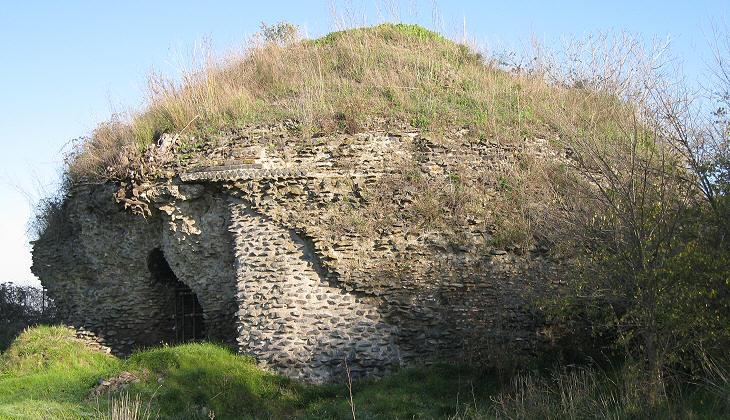 At the XI. mile we meet a round basement containing a chamber in form of a Greek cross, solidly faced with massive square blocks and covered with a conical mass, faced with opus reticulatum. Donovan
The relatively well preserved structure of a circular tomb near the end of Via Appia Antica can be regarded as a summary of the construction techniques used by the ancient Romans. View towards Rome at Torre Appia

In 1855 Father Angelo Secchi, Director of the Pontifical Observatory at Collegio Romano, built a tower on top of an ancient tomb to take exact measurements of the distance between this tower and Cecilia Metella as a basis for the topographic mapping of the region. 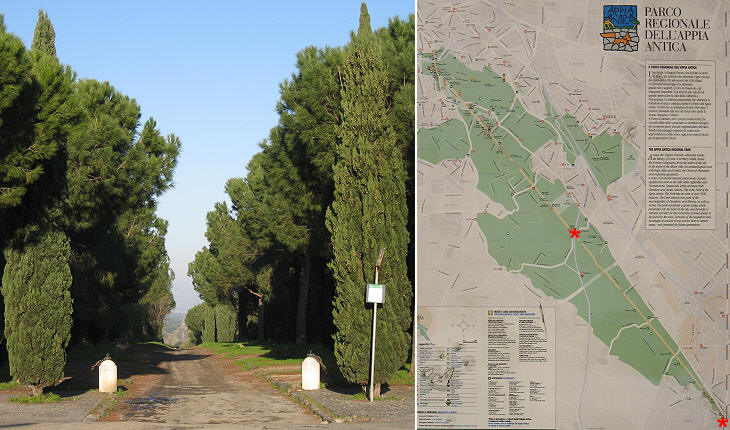 At Frattocchie Via Appia Antica ends with some scenery.

You can see these other sections of Via Appia:
from S. Sebastiano to Cecilia Metella
from Cecilia Metella to Torre in Selci
or you can move on to Albano.