- Apamea - Exhibits in Brussels
(a section of the Colonnade)

You may wish to see the Colonnade and the other monuments of Apamea first. 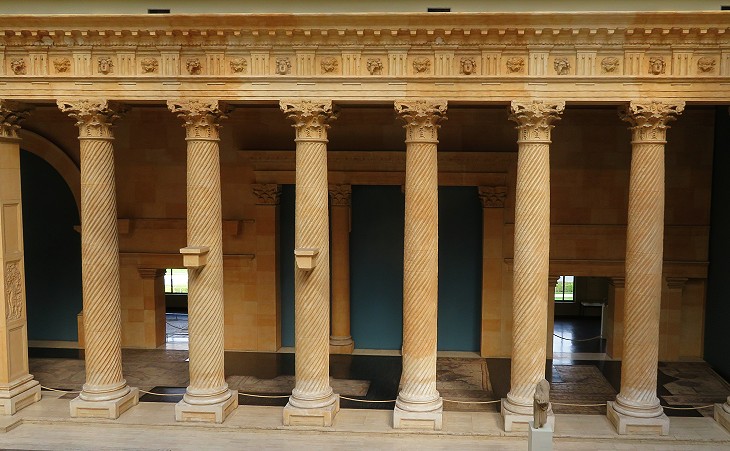 Reconstructed section of the Colonnade

Fernand Mayence (1879-1959) was a major figure in classical archeology in Belgium. He led a series of excavation campaigns at Apamea in the 1930s. In 1933 he founded the Room of Apamea at the Brussels Museum of History & Art which houses a wide number of collections, with the exception of those of western paintings and sculptures which are at the Museum of Fine Arts. The Room of Apamea is characterized by a full-scale reproduction of a section of the Colonnade with fluted columns. 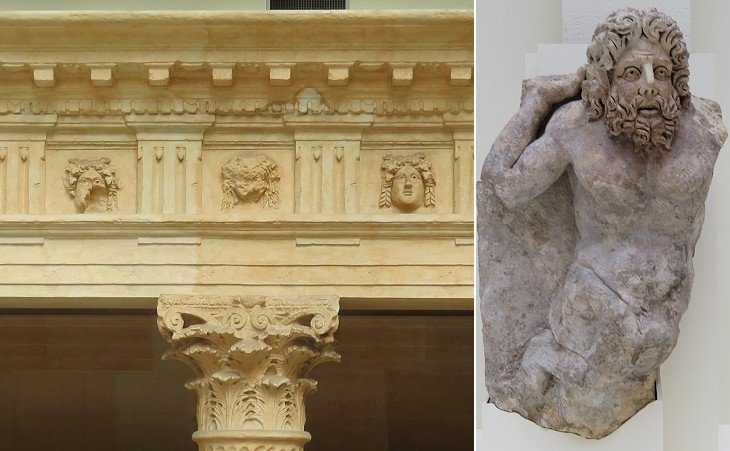 (left) Reconstructed frieze of the colonnade in Doric style with metopes and triglyphs which is not consistent with the Corinthian fluted columns; (right) relief portraying Atlas which most likely decorated a building

The heritage of Apamea in terms of columns and capitals is enormous, less so in terms of figurative reliefs and statues. Many of them were most likely destroyed because of the iconoclastic approaches of the Early Christians and of the Muslims, others were looted when the site was identified as that of the ancient town and they were sold to unscrupulous art dealers and museum directors.

Apart from a small Roman military necropolis, archaeologists have not identified significant funerary monuments which undoubtedly Apamea, similar to Palmyra and Tyre, had, notwithstanding a series of other archaeological campaigns after WWII. 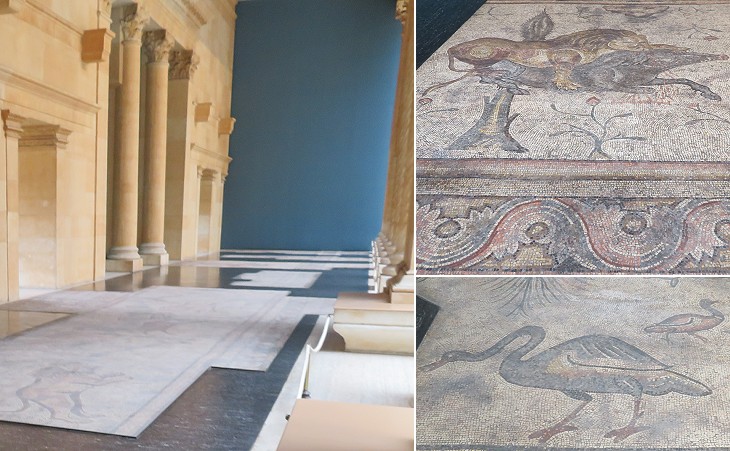 Mosaic of a section of the Colonnade; it is dated 469

Archaeological campaigns were successful in finding floor mosaics which, owing to the sound technique used for laying them down, withstood the ravages of time. The Roman provinces of Syria and of Africa (Tunisia) are those where the making of coloured floor mosaics achieved its finest results. Antioch, Zeugma, Philippopolis are some of the other towns of Roman Syria where excellent floor mosaics were found. 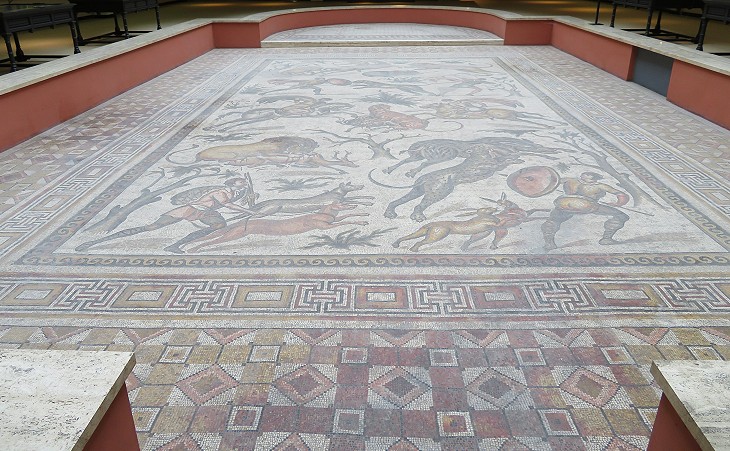 Mosaic of the Hunt, a detail of its apse decoration is shown in the image used as background for this page

This large mosaic decorated the triclinium, the dining room of a rich patrician house, most likely that of a governor of the town. Its rectangular shape with an apse, where the landlord and his closest relatives or his most important guests lay on couches, can be noticed in many other parts of the Roman Empire including France, Germany and Britain.
Archaeologists often recommend the removal of floor mosaics to museums to ensure their conservation. For a twist of fate the decision to move this floor mosaic to Brussels led to its almost entire destruction in 1946 when this wing of the museum was reduced to ashes by a fire. The ample photographic evidence which was available permitted the accurate reconstruction of the mosaic which because of its size could not be removed in time. 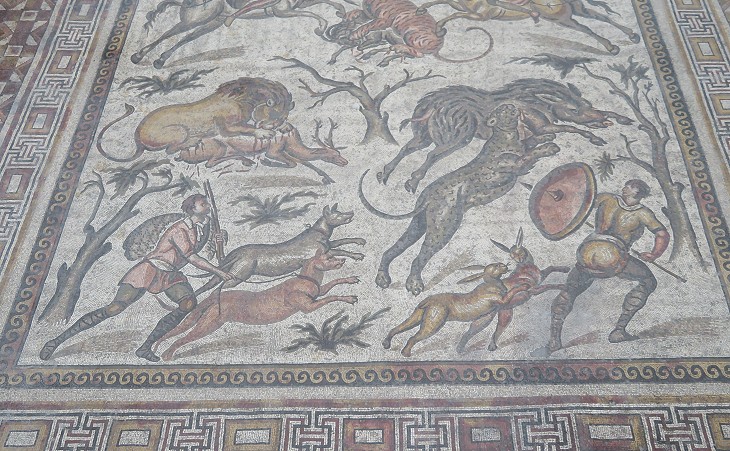 Mosaic of the Hunt (details of the lower part)

A decorative frame surrounds a series of hunting scenes which are depicted in five rows on a white background, similar to what can be noticed in the floor mosaic of the Great Palace of Constantinople. It is dated approximately early Vth century, when Apamea had completely adopted the Christian faith. Hunting scenes, which were very often depicted in floor mosaics of the Pagan period, were deemed fit also for a Christian society, because hunting was regarded as an activity highlighting the courage of the hunter and more in general his moral status and wild beasts could be broadly associated with evil behaviours. Rich landowners often decorated their villas with similar scenes in many parts of the Empire, e.g. in Algeria. 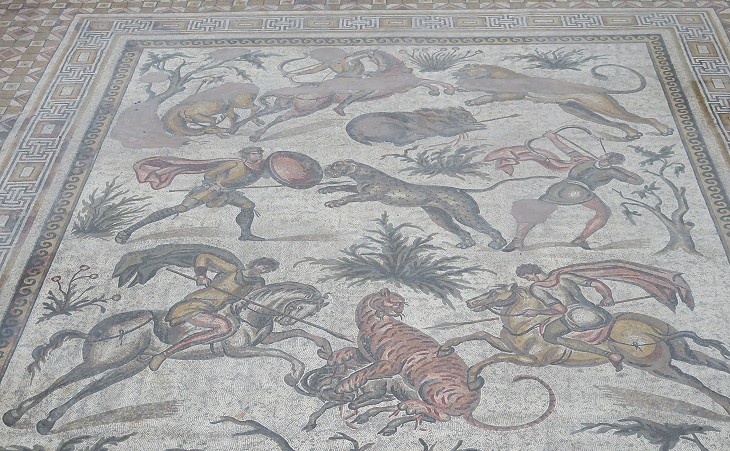 Mosaic of the Hunt (details of the upper part)

These hunting scenes are not very different from those which can be seen in mosaics and sarcophagi in the western part of the Empire, if it were not for the depiction of hunters using the arch for killing large animals. This way of hunting was rooted in the region because Assyrians and Persians were highly skilled archers and the Parthians were known for their backward shots on horseback. The Romans recruited archers in their eastern provinces to supplement the might of their armies.
Symbolic shadows and a few scattered about trees and bushes give a sense of perspective to the scenes, similar to what can be seen in mosaics of the "African school". 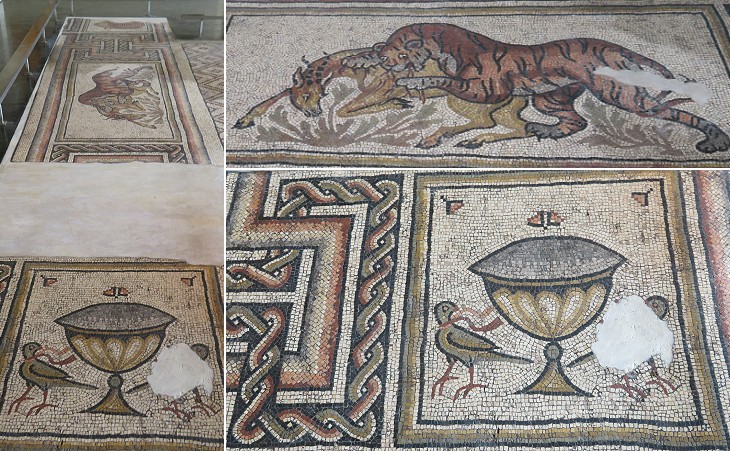 The depiction of wild animals was so popular that it is present also in the floor mosaics of churches, together with other popular traditional subjects such as kantharos (jars) and birds. You may wish to see a page on very similar floor mosaics from churches of Lebanon at the Palace of Beiteddine and at the Louvre. 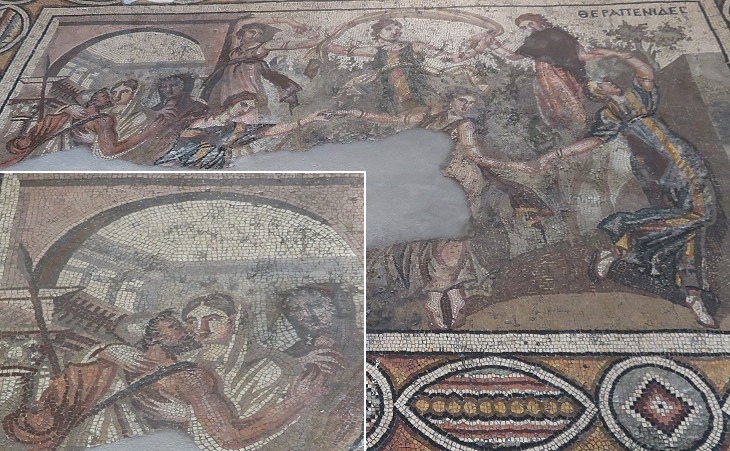 Floor mosaic of a patrician house, perhaps a school of Neoplatonic philosophers, depicting the Therapenides (the servants) and Ulysses with Penelope and Euryclea, the hero's wet nurse; other mosaics most likely related to this school of philosophers can be seen at the Museum of Apamea

The mosaics are dated second half of the IVth century, probably during or immediately after the rule of Emperor Julian who was a supporter of Neoplatonic philosophy; the depiction of Ulysses meeting Penelope symbolizes mankind coming to Philosophy.
The inscription "Therapenides" (the servants) on a mosaic from Apamea with girls dancing a round finds an explanation in texts of Plutarch, Diogenes Laertius, Stobaeus and Philo: the "Therapenides" symbolize the "encyclical sciences" which are the servants of Philosophy. Neglecting the appeal of the servants, the wise man has to search only for Philosophy, if he does not like resembling the suitors of Penelope who did not obtain the mistress favors and therefore court the servants.
Janine Balty - Les "Thérapénides" d'Apamée. Textes littéraires et iconographie. In: Dialogues d'histoire ancienne, vol. 18, n°1, 1992
The Eastern Cathedral was built above this house, perhaps on purpose to erase the memory of the last attempts to resist conversion to Christianity. Floor mosaics from a synagogue with a small "menorah"

An inscription indicates that the synagogue was built in 392 at the initiative of a group of wealthy donors who paid for its floor mosaics. Their contribution is explicitly mentioned by inscriptions (in Greek) stating the number of square feet they paid for, similar to what can be observed in churches of the same period, e.g. at Aquileia. At the beginning of the Vth century laws were implemented in the Eastern Roman Empire which forbid Jews to access civilian and military public offices and greatly restricted their civil rights. The synagogue was closed and in ca 415 a church was built above it, something which protected its floor mosaics. The decoration is entirely geometric with no religious references, except a small menorah, unlike what can be observed in many earlier synagogues in Galilee.