Beit Elfa. - Foundations of buildings and walls. There are in the ruins many stones well dressed, and apparently older than the Arabic work.
Claude Reignier Conder - The survey of western Palestine - 1883 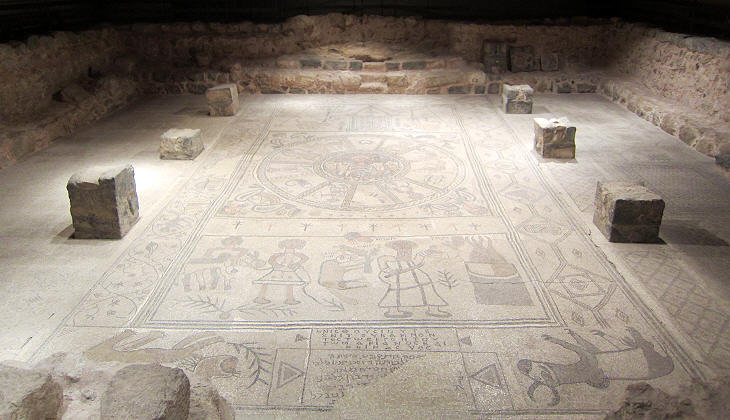 In 1928 the members of a kibbutz near Bet She'an (ancient Scythopolis) discovered the ruins of a VIth century synagogue. The building had a mosaic floor with an inscription in Aramaic stating that it was built for the price of one hundred measures of grain donated by the villagers during the reign of Emperor Justinus (517-528). The reference to measures of grain shows that Galilee (similar to the neighbouring Hauran region in Syria) was one of the granaries of the Roman Empire and that farmers were wealthy enough to decorate their synagogues. The size of the synagogue and its mosaic floor are similar to an earlier synagogue near Tiberias. 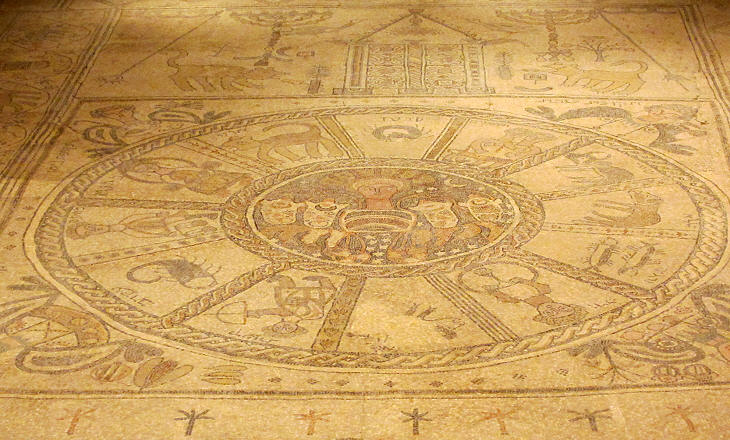 The life of farmers was marked by the tasks they had to perform during the various periods of the year and thus the villagers of Bet Alpha chose a mosaic depicting the Four Seasons and the signs of the Zodiac to decorate the floor of their synagogue. Their days began at dawn and ended at sunset and therefore they had the Chariot of the Sun portrayed in a central medallion. 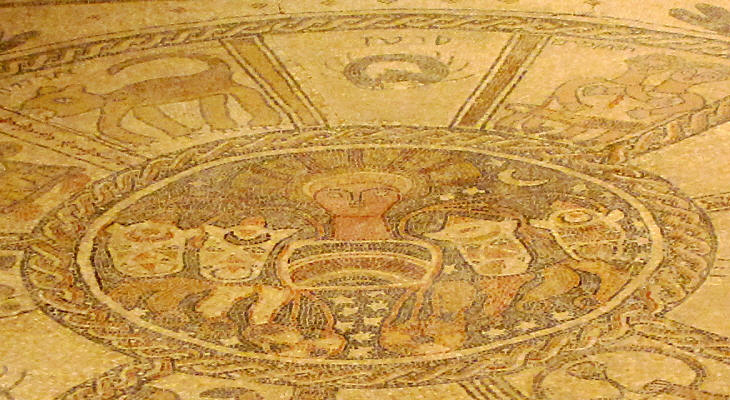 Chariot of the Sun and Leo, Cancer and Gemini

The pictor musivarius, the artisan in charge of the figurative part of the mosaic, was not as skilful as his colleagues at Tiberias and Sepphoris (see below in this page). It is fair to say however that he followed a canon of Byzantine art, i.e. the frontal representation of faces (and in this mosaic of horses too) which leads to an iconic image rather than to an actual portrait of the subject. 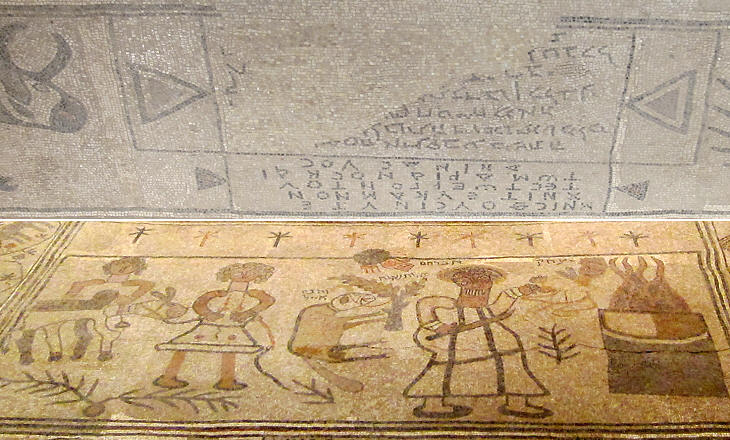 (above) Greek / Aramaic inscriptions inside Roman frames; (below) Bible episodes including Isaac's Sacrifice

Naïve art (mainly painting) gained popularity in the XXth century for its lack of conventional portrayal techniques which gave it a childlike simplicity. The unrefined representation of personages at Bet Alpha is not without interest. It gives us some ideas of the clothes and shoes the people wore and it indicates that even small rural communities had overcome the prohibition to represent human beings and animals. This section of the mosaic, similar to the frescoes of medieval churches, had an educational purpose. 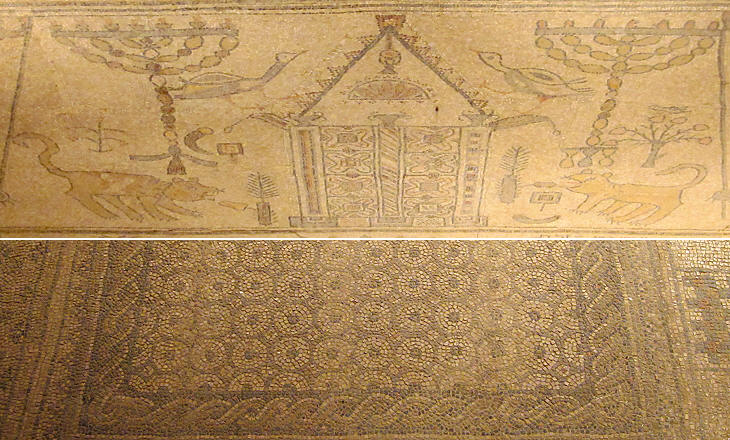 (above) The Torah shrine along with Jewish symbols; (below) decorative pattern 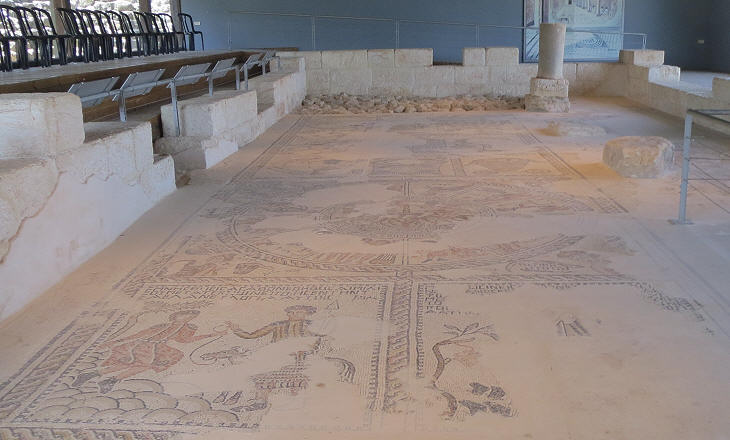 Sepphoris was a town of Galilee which stood on the Roman side during the First Jewish Revolt (67-73) and in general it was the predominantly Jewish town of Palestine which was more open to the Greco-Roman world. After the Second Jewish Revolt (132-135) and the banishment of the Jews from Jerusalem it became an important centre of rabbinical studies. The Rabbis of Sepphoris tried to reconcile their Jewish faith with their Hellenised way of living. The President of the Sanhedrin was asked to explain how he could bathe in the public baths which were decorated with a statue of Aphrodite. His answer is reported in the Mishnah, a collection of Jewish oral traditions which was compiled in Galilee in the IInd/IIIrd centuries: I came not within her limits: she came within mine! You do not say: "Let us make a bath for Aphrodite", but "Let us make a statue of Aphrodite an adornment for the bath".
You may wish to visit the necropolis of Bet She'arim which developed around the burial place of Rabbi Yehuda Hanasi who chaired the Sanhedrin of Sepphoris. 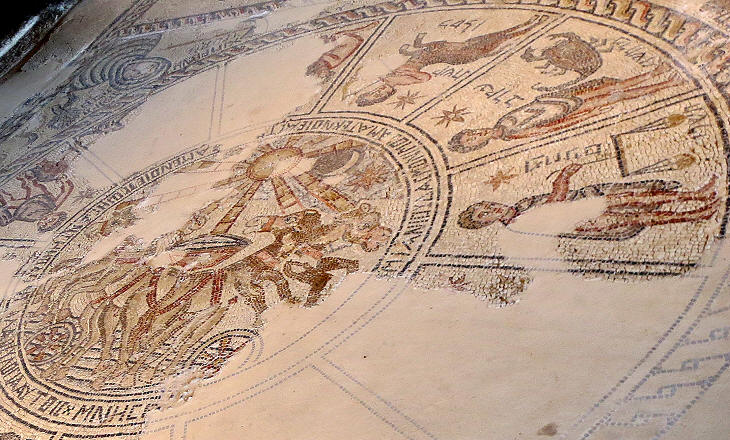 The floor mosaic of the synagogue shows the degree of Hellenisation of the Jewish community of Sepphoris. The subject of its central panel is almost identical to those at Hamat Teverya and Bet Alpha. At Sepphoris however the Sun itself drives the chariot. 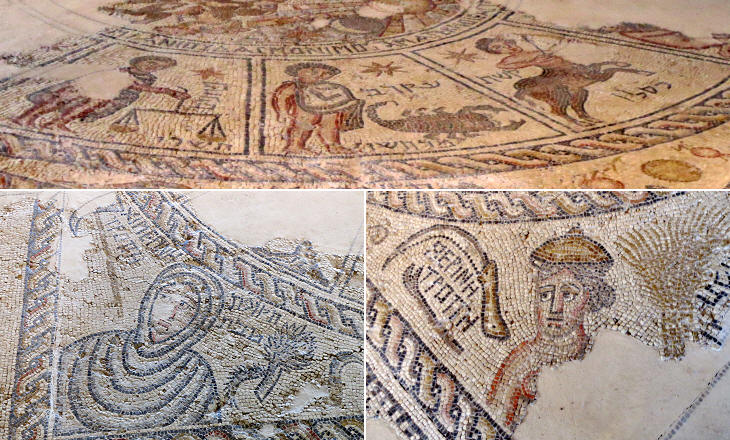 (above) Libra, Scorpio and Sagittarius; (below) Winter and Summer Episodes of the Bible: (left) initial section of Isaac's sacrifice; (right) consecration of Aaron (the figure of Aaron is lost)

Sepphoris houses some of the finest mosaics found in Israel and those at the synagogue are of good quality too. The episode on the left is explained by Genesis 22:5 And Abraham said unto his young men, Abide ye here with the ass; and I and the lad will go yonder and worship, and come again to you (King James version). The two young men wear expensive clothes and elaborate shoes, perhaps those worn by the wealthy citizens of Sepphoris, and even the donkey wears a saddle-cloth. 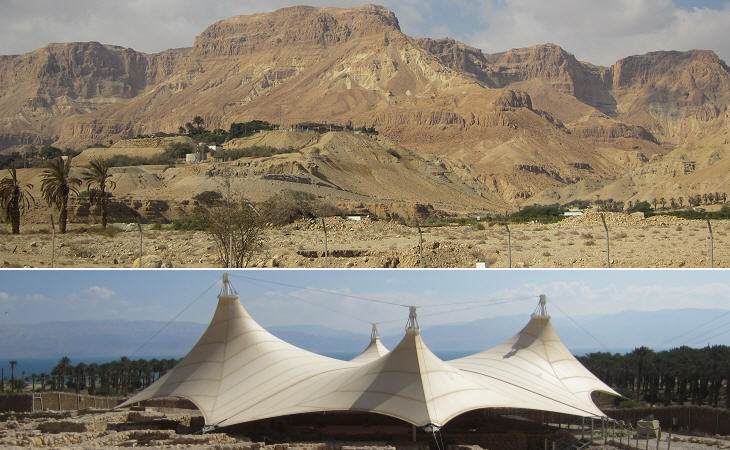 (above) Mountains at Ein Gedi; (below) structure protecting the synagogue

It was generally thought that the Romans had killed or evicted all the Jews living south of Jerusalem after the Second Jewish Revolt. In 1965 the accidental discovery of a synagogue built in the early IIIrd century at Ein Gedi on the Dead Sea shore north of Masada indicated that some Jewish communities managed to remain in the region and became wealthy enough to have a nicely decorated synagogue. 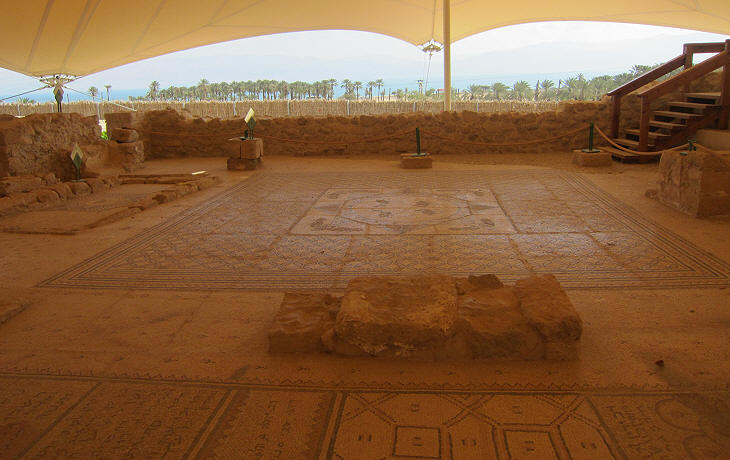 Ein Gedi was an agricultural settlement, but it appears that its economy was supplemented by manufacturing perfumes made with a local shrub. An inscription in the synagogue warned the inhabitants against revealing the "town's secret" which has been interpreted as a reference to the perfume manufacturing process. The synagogue was modified several times and its mosaic floor is dated Vth century. Central panel with peacocks and geese

The mosaic floor is mainly geometric with only a central section portraying peacocks and geese; these birds were popular subjects in mosaics of early churches (you may wish to see the geese at the Church of the Multiplication of the Loaves and Fishes in Galilee and the peacocks at St. Nilus' in Mamfis - not very far from Ein Gedi). 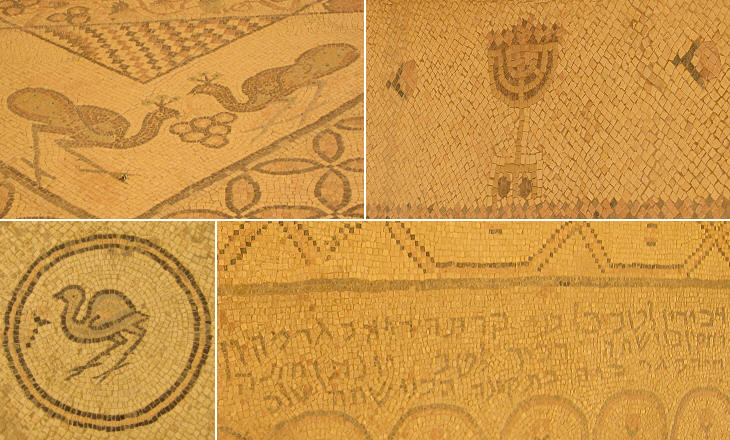 Details of the mosaic, including inscriptions in Hebrew, one of which asks Abraham, the Jewish months and the signs of the Zodiac to bless Israel

Coins have been found near the synagogue which do not go beyond the reign of Emperor Justinian (527-565). The building and the dwellings around bear evidence of having been destroyed by fire. It is possible that the town was attacked as part of Justinian's persecution of all beliefs which he regarded as heretical, including those professed by many Christians in Syria and Egypt.
As a result of this persecution in the early VIIth century Jews and non-Orthodox Christians helped the Persian invasion of Syria, Palestine and Egypt. The Byzantines managed to regain control of these countries in 628, but a few years later they lost them to the Arabs which were welcomed as liberators.
The image used as background for this page shows a detail of the mosaic at Sepphoris.